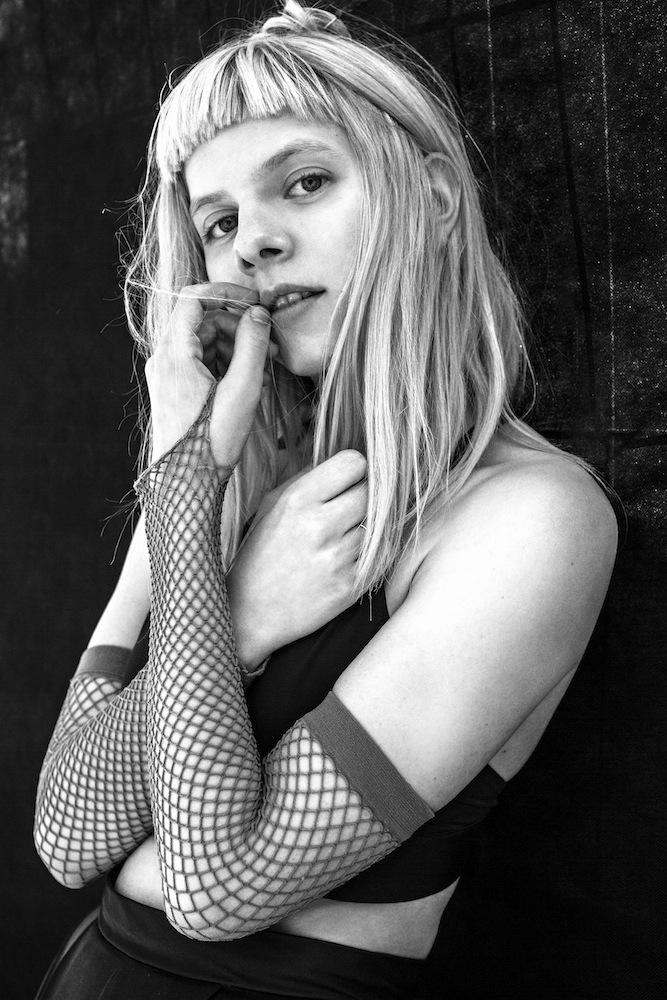 HOMETOWN: Os, Norway. I go home quite a lot because it’s very nice, and my parents, it makes them happy, I can tell, when we come back home and visit them.

BASED: Bergen, Norway. I just bought an apartment, it’s very nice, and I’ve been moving in. I’m waiting for my couch. My hometown is almost an hour outside of Bergen, and I lived in the forest. I’ve been growing up quite far away from everything, and now it’s so good, because I live in the middle of the city—close to the biggest park of course, so I have the trees with me. But you can walk two minutes and buy food! [laughs] I don’t have to plan everything; you had to bicycle for 40 minutes where I used to live if you wanted to buy milk to make some pancakes or something.

AN INTRODUCTION: You may already know Aurora from her 2016 debut album All My Demons Greeting Me as a Friend (Petroleum). In short, she’s a poetic author of art-pop, a dazzling performer, and an unaffectedly curious artist. She’s currently writing her sophomore album.

DREAMING WITH EYES OPEN: I love all kinds of nature. I think everyone loves nature, but some of us haven’t experienced it at the right time in our lives, when we can actually appreciate it, which is very young or a bit older. There’s a phase in our lives when nature doesn’t matter that much because we have so much inside of us. I go hunt for all kinds of things, and I escape all kinds of things when I go to the mountains or the forest or the ocean. They’re three very important places where I seek something simpler. It’s an easier source of happiness, I think, when you reach the top of a mountain; you haven’t really done anything, you’ve just been walking in nice scenery. It’s important to have one safe place to seek—either the ocean, the mountains, or the forest.

I wish I could say that I make music on the mountain in my head, but actually, I don’t, because that’s the place where I don’t think about anything. I simply exist, and I don’t demand anything from myself, not any ideas, not any urges, not anything. I just am, and it’s such a nice feeling. I’m kind of awake but I’m also dreaming. We forget to dream when we’re awake. Most of us only dream when we sleep, and I think that’s a dangerous thing, but you dream when you’re awake and you’re on the mountains and in the forest. That manifests later in music, and when I come back home, then I get inspired; it’s a reaction that comes a bit later, but not in the moment, because that’s just a holy thing.

RECHARGING: Last year, we did too many shows. We played here [at Slottsfjell] two years ago, so it’s nice to be back, and it’s very nice this year because we have more time. I think it’s a healthy way to perform when you have fewer performances, not every day like last year, because you actually care more about each and every performance, which is very important. You should care a lot about every single show, because it’s different people and a different crowd, and it should be the best show ever every time.

A GROWING BUG COLLECTION: I have a grasshopper, and it’s quite rare because I don’t see them at home a lot. But I found one, it was dead already, which they have to be for me to collect them. And I have a lot of bumblebees, but you have to check if they’re awake first. I put some water with some sugar in, because the honey is too thick for them to eat. Sometimes bees actually faint because they don’t have enough food in their system, so it’s very important to first put some water with sugar very close to them, and then wait a few hours and see if they wake up and eat it. If they don’t, then they’re dead, and you can put them in the glass bottle.

FAMILY, CIDER, AND LISTENING: My older sisters, I have two of them, and they’re very different. Miranda, she’s a makeup artist—she’s here today actually, out there somewhere—and she really loves music, she listens to it all the time. The way she listens to music is different from my other sister, Viktoria, who if there’s something [she likes], then she cries or she dances—she feels it. I love to play it for both of my sisters, but I know they also love me so much and they love everything I do. [laughs] It’s a nice confidence boost when I play music for them. It’s always my family [that I play music for] first. We have some red wine or some good apple cider—a Norwegian apple cider is very good, it’s a bit stronger than others, it’s like wine, and it’s not too sweet. It’s just mmm. I wish I could bring some to you, it’s gorgeous, it makes you really calm, no hangover. We drink that, we have a lot of it. Then we listen to all of the new songs I’ve done, and we just feel them.

THE NORDIC INFLUENCE: I think what’s very commercial in Norway could be very alternative in the States, just because the most easily understandable pop in the world comes from the States. It depends how deep you go into music, if you can feel the difference between dream-pop and art-pop then you’re deep into it, but some people are like, “Okay, there’s pop and rock and country music,” and that’s fine too, because music is just music. But my first album is definitely a bit Scandinavian, because it’s kind of synth-y and cold but also warm, and alternative but quite commercial as well; I think that’s what Scandi-pop is. Also, my voice, I know it’s quite sharp, it’s not warm and breathy. It’s very in your face; it sounds kind of like ice.

WHAT’S NEXT: My second album will be a bit different. I want to make a new world. It looks different to every person; it depends what kind of eyes you have. I have some titles like “Queendom,” about all the people in the Queendom, what they’re doing and what we dream of. It’s a new world, which I’m very excited to share.

CURRENT INSPIRATION: The most inspiring things right now are eyes and roses; that’s mainly what I focus on these days. I discovered an idea called opia, which is the weird feeling of looking into someone’s eyes; you feel like you’re peeking through a keyhole of a door that will maybe open and become a big world, without knowing if you’re looking into a world or out of it. It’s like you’re looking out of a keyhole, and you can’t understand which side of the door you’re on. I want to write a song about opia, and it will be just about that thing: looking into a keyhole and not knowing if you’re going into something or going out.

SOME FINAL WORDS: It’s very fun to produce songs. It’s the most fun part, because you can change the way people listen to it; you can make them laugh to a really sad song, make them dance to the saddest song ever, if you just put the right sounds in it—or the other way around. That’s so fascinating, that a song can be sad but it can sound light and happy. It makes it into an onion with more layers, and the deeper you go into it the more you cry. [laughs]

FOR MORE ON AURORA AND UPCOMING TOUR DATES, VISIT HER WEBSITE.