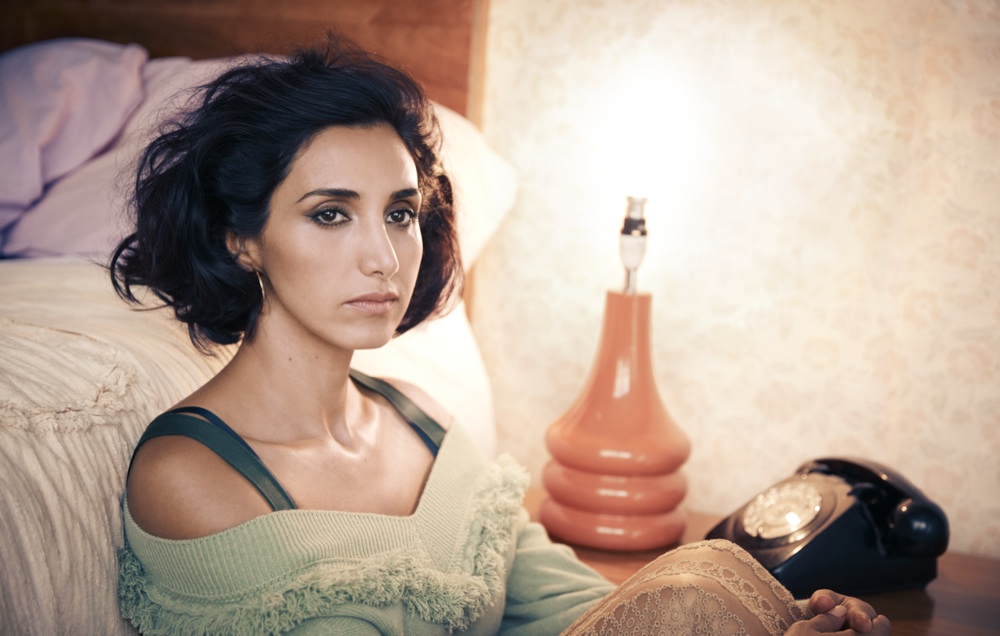 Born in Iran, raised in small-town Germany, and based in Los Angeles, actor Narges Rashidi is comfortably trilingual—quadrilingual, even, if you count her “film Turkish.” Her most recent film, Under the Shadow, is equally international: the debut feature from British-Iranian director Babak Anvari, it was filmed in Farsi with Jordan standing in for Iran in the 1980s. The film premiered at the Sundance Film Festival in January, and is Britain’s official submission for the “Best Foreign Language Film” Oscar.

Released last Friday, Under the Shadow follows Shideh, a woman living in an Iran under siege towards the end of the Iran-Iraq War. Shideh begins the film in a bad a place: she recently lost her mother, with whom she was very close, and is denied re-entry to medical school because of some political activism in her youth. She resents her husband, a doctor, for the privileges he has been afforded as a man in a patriarchal society, and has little patience for her young daughter, Dorsa, who is convinced that there are malevolent spirits (djinn) haunting their apartment. The film has been called a “horror” movie, but would more accurately be described as a lean, suspenseful thriller about a woman increasingly closed in on by everything around her.

EMMA BROWN: How did you first hear about Under the Shadow and get involved?

NARGES RASHIDI: It happened in a very unusual way. A friend of mine, a fellow actor, Navid Negahban, who used to play Abu Nazir in Homeland, told me about the script. He said that he’d read a script and it was so amazing and there was a part for me. It’s the debut feature of a very young director, but he had shot this short film called Two and Two, and we watched it on YouTube together. I watched that before reading the script or anything, and I was like, “Oh my god, this guy is so smart.” The short film says so much with so little, and I just loved it. Time passed and I didn’t think about it; it just went away. Months later I got an email from Navid introducing me to the producers. I Skyped with Babak Anvari, the director of the movie. He was in London, I was in L.A., and we chatted a lot about the book and my view of it. I met with the producers again in Berlin at the Berlin Film Festival and they flew me to London. On my way back to the airport, Babak sent me a message saying he would love for me to be his Shideh, and that was that.

BROWN: I read that you didn’t have that much rehearsal time before you started filming.

RASHIDI: Once or twice a week or, [Babak and I] would jump on Skype and talk about the book and the character and the backstory. He would send me music and books that the character would read—her political view. For me, that made it so easy to get into Shideh’s head and the way she thinks. Then I would go back and do my own research and meditate on certain things in her life and past. When we were in Jordan, we knew we only had 21 days and a lot on our schedule, so we weren’t trying to figure that out. We didn’t have time for it.

Also, I read the script in English. I speak Farsi, but I can’t write Farsi or read Farsi, and the movie is shot in Farsi, so my whole family—my father and my sister-in-law—I made them sit down and rewrite the script for me phonetically so I would be able to read the dialogue in Farsi. My dad and I would Skype everyday—my dad in Germany and me in L.A.—and we would go through the script so I’d get the words right. I left Iran when I was very little and we spoke Farsi at home all the time, but it’s so different.

BROWN: Were they excited that they could be involved in your work?

RASHIDI: Yeah, they were so sweet. They’re always so helpful. I think it was so exciting for them—me making a movie that’s in their language.

RASHIDI: Iran has gone through a lot of changes with the revolution and lots of new laws, and the war was pretty traumatizing for a lot of people. Everybody has their own stories, but my parents tried to protect me. They’re extremely strong, unbreakable people, so I did not feel it while I was living it. I think a part of me for sure has tried to put it away and forget about it. We didn’t really talk a lot about it. Not at all, actually, to be honest with you. I have some memories. I remember when the war was going on—it had  already been going on for a long time—I fell asleep on my mother’s lap and I woke up because of some sounds. I asked her, “What happened?” and she was like, “Nothing. Just go back to sleep. It was just some bombs.” [laughs] Things became so normal. Or when we would go down to the cellar to protect ourselves, she would turn on the music and start dancing so we, the children, wouldn’t be afraid. These are memories that I have. If I look at pictures from back in the day of all the grown ups, they all look really drained and exhausted. That was something I used a lot for my character—just the visuals. I went to a photo exhibition in L.A. while I was preparing the part. When you look at pictures of people during that time, they all have this exhaustion in their face and their eyes.

It was cathartic to go back to my roots. When when I moved to Germany, I tried to become so German. You learn a new language, you look different, you wear different clothes. As a child you want to be accepted and integrated into this new world. I was so busy doing that that I completely forgot where I come from and where my roots are, and that was a very, very special, beautiful experience—sometimes also a painful experience to go back and relive that in a way.

BROWN: Have you parents seen the film?

RASHIDI: Yes, they have.

BROWN: Was it also cathartic for them?

RASHIDI: I did not ask, but they loved the movie. My mom said she felt herself in it. I guess subconsciously she must have been my muse. There are little things I felt like my mother was a big part of.

BROWN: When did you first become interested in acting?

RASHIDI: Very, very early. I remember one scene in my life where it was just my mother and me in the living room waiting for the others to arrive. My mom had to make dinner, and I just started crying for no reason. She was like, “Oh my god, what’s wrong? What happened?” and I just started laughing and said, “Nothing, I just wanted to see if I could act.” That stuck with me. Also, I grew up in a very little town in Germany called Bad Hersfeld. It’s a very beautiful, cute town, but there’s really nothing going on—it’s six o’clock at night and everything closes and that’s that. But [Bad Hersfeld] has a beautiful, gorgeous, and very well-known summer amphitheater. I would always go up there and watch the actors and go see the plays. I think that’s where it all started.

BROWN: When did you decide you wanted to become a professional actor?

RASHIDI: I used to dance. There was a time when I wanted to do musicals and sing, but I was very young—I was 16. Then I got scared when I got accepted to school [for it] and I said, “Okay, I’m going to wait another two to three years—finish high school and then decide.” And when I finished high school, I didn’t want to do musicals anymore. I got more serious. My dad drove me all over the country to audition for these acting schools and once I had [gotten in], he told me, “So now you know you can do it, why don’t you just study economics?” [laughs] I freaked out and I told him, “You don’t take me seriously!” I started crying and drama, drama, and then he got it. He knew that there was no way he could stop me. Ever since, he’s been very, very supportive.

BROWN: What was your first paid job as an actor?

RASHIDI: It was an American production, shot in Berlin, called Aeon Flux, starring Charlize Theron. I was jumping when I got the call that I got the part. I’ve got, like, 11 seconds of screen time in it, and my part’s name is “Pregnant Woman.” I give birth. [laughs] That was my first part. I must have stared at [Charlize Theron] for half an hour with my mouth open because she’s so beautiful. There were 300 people on set and it was just crazy.

BROWN: That must be quite stressful as well.

RASHIDI: I was so young and naive and just so excited to be there and have this part that I didn’t even feel any of that stress. I was just happy. [laughs]

UNDER THE SHADOW IS OUT NOW IN SELECT THEATERS.