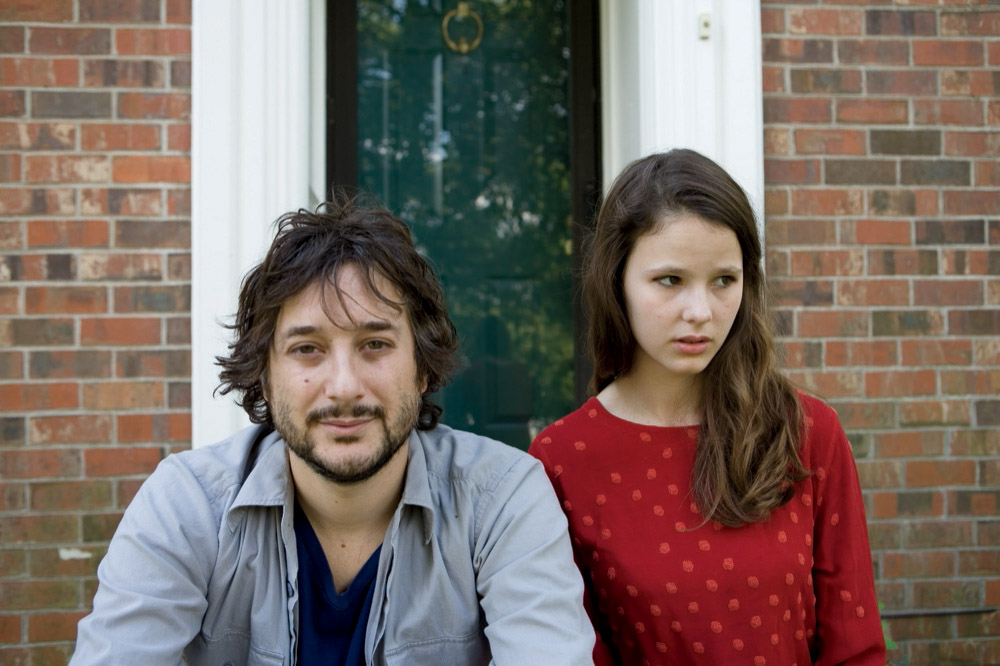 Tumultuous, disassociated riffs on the modern dysfunctional family, assembled in a way that dares you to sit through them, is the way many might describe the movies of Harmony Korine. After his script for Kids (1995) was directed by Larry Clark, Korine set out on a wave of filmmaking—Gummo (1997), Julien Donkey-Boy (1999)—that was discomforting, but not terrifying. It was clear he was out to direct audiences as much as he was directing the films. With Korine’s latest movie, Mister Lonely, he’s moved into a different phase of his work: It’s a film about another dysfunctional “family” (a group of celebrity impersonators), who encounter their own emotional terrors, softened with a rapt, dreamy glaze.

Elvis Mitchell: Your latest film, Mister Lonely, has a really interesting cast featuring Diego Luna, Samantha Morton, Anita Pallenberg, and David Blaine, among others]. What made you decide to do a movie with this group?

Harmony Korine: A lot of it was just people I admire and had wanted to work with, as well as some friends and family. The way I make movies is that after a while I start to compile enough talent that I begin to think of them in a collage form. Leos Carax is a perfect example of that.

EM: Is he somebody who influenced you?

HK: Yeah, definitely, in the way you could say Buster Keaton influenced me-someone who reveals layers of poetry in film.

EM: There’s a kind of movement in this one that really reminds me of him, like that one scene when Diego Luna and Samantha Morton are walking down the street and the camera pulls ahead of them, floating.

HK: He was the one guy who kind of lived in character the whole movie and stayed in the castle where we were shooting after everyone else would go home. I would be there really late and see him riding his unicycle down the hallways, or the grip would see him playing the accordion naked at three in the morning in a bathtub. He just got into these bizarre phases, and I couldn’t figure out how they were related to the movie. It was all part of his process.

EM: One of the funniest things is to see a movie in which Charlie Chaplin talks the entire time. How did you come up with that?

HK: I’d always heard stories about how Harpo Marx was the most talkative of the Marx brothers. I found it interesting that someone you never got to hear speak in films would never not speak in real life.

EM: It’s interesting how poetic this movie is-in a way the other ones you’ve directed really aren’t.

HK: When I started making movies, I was pretty young, and at the time I felt like there needed to be more confrontation in cinema—or I needed to make something more disruptive-so in the beginning, those movies were me wanting to play with the rules. I also felt strongly about narrative at that time, about things coming from all directions. There was a certain chaos to those films that I was living. [laughs] When I made this one, I just felt different about things.

I WANTED TO GO OUT THERE AND . . . BLEED FOR THE PEOPLE. HARMONY KORINE

EM: Diego Luna’s character talks so much about being alienated and dislocated that it was almost as if he was describing you when you first got started in the movie business.

HK: I still feel like that. I just haven’t let myself get to a place where I’ve felt a part of any kind of a community, so I’ve always stayed outside of it. I do have friends who make movies, but for the most part I never really wanted to feel like I was part of an industry. My knock with filmmaking is the whole bureaucracy around it, so in some ways staying outside of it is easier for me. I went through this really horrible phase where I didn’t know what I was doing and I wasn’t sure if I wanted to make movies anymore. For a few months, I spent time with this small cult of fishermen known as the Malingerers. It was a group I met in Panama who were searching for this fish called the Malingerer fish, which was supposed to be a golden fish that had these three dots on the side. The story goes that if you press the three dots in a certain way, it sounds like a toy piano.

EM: Did you find any?

HK: No. In the beginning it was interesting to watch these guys, and I started to believe this fish existed. But I became disenchanted by the whole thing, and one day I got into an argument with one of the leaders, and his wife said, “You don’t believe anymore. It’s time for you to go.” And I said, “You’re right,” and that’s kind of when I started feeling like maybe I could make movies again. But it had taken me a good six or seven years away from it.

EM: Do you think making those earlier movies took too much out of you? I think about what you were trying to do with Fight Harm [which Korine abandoned].

HK: Yeah, Fight Harm almost killed me. But Mister Lonely was a pleasure. The only thing that was difficult about this was that it was more ambitious, so it took a lot of time to get to the point where I was filming it. But when I was actually on set, I enjoyed every minute of it. It was nice to wake up in the morning and have this big camera waiting for me.

EM: In retrospect, do you feel you needed to have a movie that took some time to get going so you could ease yourself back into things?

HK: Yeah, but to be honest, my dream was always to have a career like Alan Clarke or Fassbinder or Jerry Lewis-people who were able to pump films out and not be so precious about everything; even able to make mistakes and experiment and play. But I think it rejuvenated me and made me want to make more films. With the other movies, I always felt like I was fighting something.

EM: Did you feel that on Julien Donkey-Boy?

HK: In some ways, my life was just deteriorating at that point. I didn’t feel comfortable with where I was at the time-living in New York and working with the people who were around me; I just felt like there was a lot of dishonesty. Making Julien Donkey-Boy was a good experience, and doing it in The Vow of Chastity [a set of 10 rules drawn up by the filmmakers Lars von Trier and Thomas Vinterberg as part of the Dogme 95 film manifesto] was nice, but I felt like I needed to experience more things that didn’t have anything to do with that world, or the art world.

EM: What was it like to go from being this guy watching movies by Godard and Bertolucci to having them tell you how much they liked what you were doing?

HK: It was strange because at the same time that I was getting accolades from them, I was getting ripped up by a lot of mainstream critics. It was a lot to take for a 22-year-old. To some extent, I knew it was going to be like that because of the types of films I was making, but I wasn’t prepared for the level of venom. In hindsight, it seems kind of insane, but with Fight Harm I was pure in my intent to make the great American comedy. I wanted to make everyone laugh—I wanted to go out there and give it my all and bleed for the people. I figured the essence of comedy is tragic—you know, guy slips on a banana peel and smacks his head and everyone laughs, so I thought the simplest thing would be to get into a series of fights. If it was just one fight, it wouldn’t be funny, but I thought after the 15th, because of the repetition, the humor would start to kick in and I’d have a real gut-buster going. I even remember thinking, Maybe this can play in shopping malls. . . . I guess I wasn’t prepared for what it took out of me.

HK: I didn’t think they were that distant—I thought it was just an extension of slapstick and all those comics I loved. Now if I look at that footage, it’s maybe not as funny as I imagined it would be. [laughs]

EM: Where is that Fight Harm footage now?

HK: My house burned down about eight years ago, so I lost some of it, but I still have four or five fights; those last ones, which were really brutal, I was doing with that bouncer from Stringfellows. One happened around Gramercy Park one night—I had taken a lot of quaaludes and I felt up for it, but I ended up getting my ankles broken and thrown in jail. Then I was like, I just can’t do this anymore. Plus everyone around me at the time started to tell me they were worried about my emotional stability, and that I had lost sight of what I was trying to do.

EM: It seems like you were testing your own devotion to your craft.

HK: Yeah, there is something to that.

EM: Mister Lonely feels simultaneously dreamy and really alert. How much of it actually came from dream states?

HK: My favorite thing in film is something that’s indescribable, so yeah, there’s a slightly ethereal quality that I was working for on this movie, something that I wasn’t able to really explain in words. A lot of times, I feel like if it’s something that I can explain, then it isn’t worth pursuing. I work from a kind of subconscious place. Movies need to be felt or they go through you.

EM: I find when I’m on YouTube late at night, I think about what you once said about collage being the ultimate art form. Do you find yourself doing that, too, just cruising YouTube and making a collage?

HK: Oh, without a doubt. If you take 50 of the best from there, you could almost make an incredible movie. There’s a randomness and something very pure about some of the clips on YouTube that I was always trying to copy.

EM: Back to Mister Lonely. When you first decided to put a Marilyn in there, did you know that you were going to end it with her suicide?

HK: Not in the beginning. The first thing I did when I was writing the screenplay with my little brother [Avi Korine] was we figured out which stars had impersonators—the types of people who live as other people and who would be instantly recognizable. But I also wanted to work with people I liked. I didn’t want to work with Elvis because I couldn’t deal with him.

HK: Not you, Elvis—the other Elvis! But anyway, then what happened was I thought it would be nice to bleed the myth into the narrative of the impersonators. So there are all these different traits, like Chaplin’s sadism and various things I’d heard about that I thought would be interesting to attach to the impersonators themselves. Marilyn’s suicide was like that.

EM: It was a really interesting choice to have Diego [Luna] play Michael Jackson.

HK: I liked the idea of the Michael Jackson not being black or white, but Mexican. Plus I liked Diego’s accent. He has a real-life sweetness that I thought would make sense with the character.