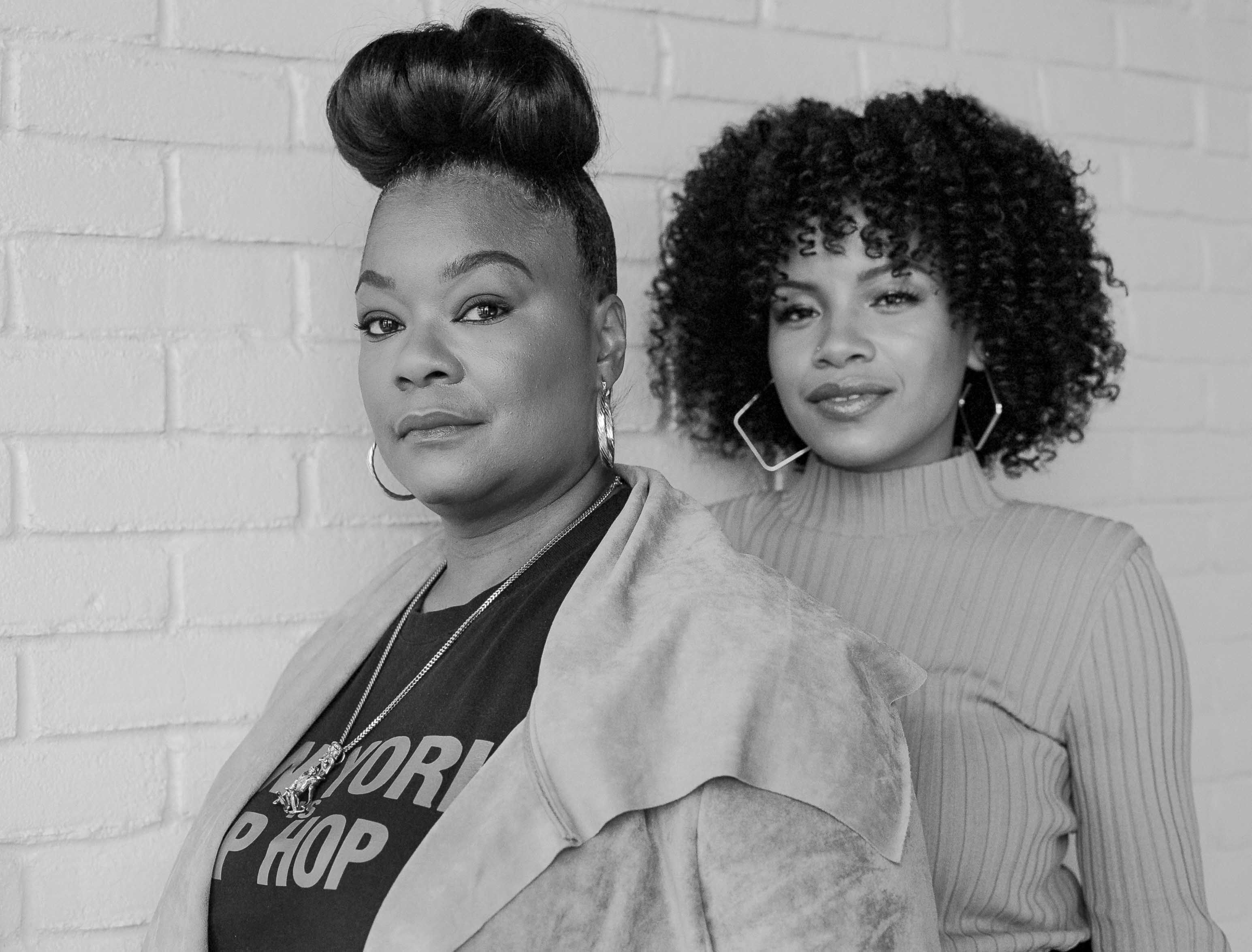 There would be no Nicki Minaj and no Cardi B if it weren’t for a 14-year-old girl from Queensbridge, New York. In the ’80s, Lolita Shanté Gooden was coming up in the projects, struggling with little money and a mother who’d grown distant from the disappointments of lackluster men. For cash, Gooden would steal classic ’fits like Sergio Valente jellybean jackets and hawk them to neighborhood kids for cash. In the park or on the street she’d rake in money from her side hustle: battle rapping.

Before her rhymes even hit the radio waves Gooden was notorious—the Champ with a capital C—and her stomping ground, home to household names like Nas and Mobb Deep, was chock-a-block with countless hopefuls who wanted to usurp her. Her legend reached the ears of DJ-producer Marley Marl, a fellow Queens native. One day, while she was out doing laundry, he called her up to his apartment to record a response track to the hit U.T.F.O. record “Roxanne, Roxanne.” The song was about a woman who curved the group’s advances and Marl wanted Gooden to roleplay and fire back. The session ended with a scathing, completely freestyled track they called “Roxanne’s Revenge,” released in 1984. Gooden went back to her chores and, overnight, the tape blew up. Roxanne Shanté was born.

The first female MC on the hip-hop scene, Roxanne Shanté started touring with Biz Markee and other members of the Juice Crew, battling upcoming female rappers in the infamous Roxanne Wars, and stomaching the trauma of objectification and domestic abuse while trying to navigate her way through puberty. Her legacy is incontestable, and her story, following a long line of music biopics, overdue. Netflix’s new film, Roxanne, Roxanne, produced by Forest Whitaker and Pharrell Williams, takes on her difficult life and inspiring resiliency. Chanté Adams (of no relation) is the supremely talented breakout star cast as the trailblazing icon. Her performance is deceptively good—this is her first ever on-screen role. The two sat down together to chat hip-hop, women’s solidarity, and the magic of their shared name.

CHANTÉ ADAMS: I was so, so nervous [to meet you.] I was like, “Just breathe, just breathe,” because I was meeting you and [The Fresh Prince of Bel-Air actress] Nia Long all in the same day, like all in the same hour, so I was kind of freaking out. I remember your heels clicking down the hallway before I saw your face and I was like, “That’s her.” Your presence is so strong even before you enter the room. I know when you’re coming, I know when you’re around.

ADAMS: You came around and you just gave me the biggest smile and you were so happy and you told me that I looked like you. And then you just sat down and I watched you and Michael have a conversation. I was like, “Okay, I can play her. I can do this.”

SHANTÉ: She’s born for the part, she was destined to be Roxanne Shanté in this movie. To see your performance was incredible to me because, as I got to know you, I got to know the things that you grew up with, like having a wonderful childhood, having a mother, having a father, having your siblings, having them in the same house, and it being such a total opposite of the role that you were getting ready to play. Because you know it’s easy to play the things you don’t have but to play, to pretend, like you don’t have the things you do, had to have been twice as hard.

ADAMS: Everything lined up so perfectly because they started casting this while I was still in the classroom [at Carnegie Mellon]. And so for me to graduate when I did and move to New York when I did—I was doing this summer program through the American Theatre Wing called Springboard and I was in this little program for two weeks, from 8AM to 10PM because we would go see a show every night. And so I was sneaking away from those classes—with permission, I’m a good girl—to go audition for this. But I was so proud of myself because that was my first movie audition and my first movie callback. You couldn’t tell me, there wasn’t a thought in my mind that I would actually get it because who gets their first movie audition?

SHANTÉ: Chanté! [both laugh] And who makes a record on their first take?

SHANTÉ: If we had to sum up the experience of her first time coming out the gate, coming out of college, and being able to nail such a role. Now for it to be such a great movie, and for it to be like the movie that a lot of people are talking about, you know, a must-see, like wow, our shit’s a must-see. And for me to make “Roxanne’s Revenge” and do it so nonchalantly, those are because those are things that are destined and when things are destined they come easily.

Like my path was to do the laundry. I stopped, did the record, but I still went back and did the laundry. My path was to take care of my sisters. I stopped, I made sure I took care of my sisters. Had [Chanté] decided to go home, it would have been something different, but instead she was like, “No, I’m coming to where my dream is” and everything happens for a reason. Everything happens in time, on time, all the time.

NGOZI NWADIOGBU: I love the idea of destiny and I think that’s totally true, but it also speaks so much more to both of you that you had all these obstacles to overcome in order to reach this place that you deserve and was destined for you. That’s a theme in the movie, just the precarity for young women, whether it be in rap or, for you Chanté, just the current state of Hollywood. Women have to watch out for themselves, especially young black women.

ADAMS: The film speaks for itself about female empowerment but also the entire process. I can only be who I am because of who I have lifting me up, supporting me. The team on this project, the team of women protecting me—Nia [Long], Shante, Mimi [Valdes], Nina [Bongiovi]—those four women are what made it so easy for me to feel like I could flourish. Because they supported me and motivated me and let me know that I could do it. I was so lucky to have that.

SHANTÉ: I have a nonprofit organization that I run with my husband called Mind Over Matter where we deal with inner city youth, mainly young women from ages 13 to 18 because I find that’s a very impressionable age. We’re responsible now for well over 600 graduates of girls who were at risk. We have valedictorians, salutatorians, and these were girls who were not even going to graduate who become valedictorian, who become salutatorian. So I take a lot of pride in that. I think that it’s one of the things that I take the most pride in. That and being a CASA.

Shout out to CASAs, those are Court Appointed Special Advocates. I’m in Essex County and what we do is, children who are in foster care who don’t have a voice, I go to court and I speak for them. I think because I experienced so much as a child, I feel like I’m responsible for every child that I come into contact with. I also feel like as a sister, I’m responsible for every woman that I come in contact with. I make it my business. You don’t have to be black to be a sister, ma. You just have to be a woman, you just need to be whatever it is to be a sister. You could be transgender, you my sister, you my sister, at the end of the day.

NWADIOGBU: What are your thoughts on the current state of hip-hop? What do you listen to?

ADAMS: Well, she is hip-hop queen, the hip-hop mother I would say. [laughs]

ADAMS: I listen to everything. I have such an interesting story with music because my father is a choir director and so I grew up listening to gospel in his car, old-school R&B in my mother’s car, and then when I was with my siblings, specifically my oldest brother, it was old-school hip-hop. I found what I like. I’m the young girl so I’m into neo-soul, Solange and SZA and things like that. Any music that speaks to our culture and tells our stories I’m a fan of.

SHANTÉ: I’m that favorite hip-hop aunt that they like to see coming, I’m that happy aunt that shows up to the barbeque and be like, “Listen you can borrow my car, just make sure you bring it back with a little bit of gas.” [laughs] The only thing I feel that the younger generation of hip-hop owes me is the fact to make sure that they take care of their business properly and that they continue this hip-hop growth. They don’t owe me anything else. Now, they’re going to respect me. That’s non-negotiable. But I expect them to take care of their business properly, which is very important to me because I was taken such advantage of industry-wise.

Seeing people being able to send their kids off to college off the music and things that you’ve made, or buy houses off the songs that you’ve written, and then never even once send you a card to say “Thank you” or “Are you okay?” I wouldn’t wish that on my worst enemy. But I never built a resentment for it. I learned that forgiveness—not forgetfulness, you know, don’t confuse the two—but forgiveness is definitely a prerequisite for ongoing happiness and success. You have to be able to do that.

I hope, out of the movie, they’ll have a better understanding of why the young Roxanne Shanté was always so snappy and so mean and was always so standoffish. That’s one thing that people say, “Roxanne Shanté wasn’t afraid to fight. Roxanne Shanté would fight a man, fight a woman.” I had men and women fighting me, what was I supposed to do? We’re blessed and we’re here. When people see me I want them to be like, “Damn, she really survived that.”