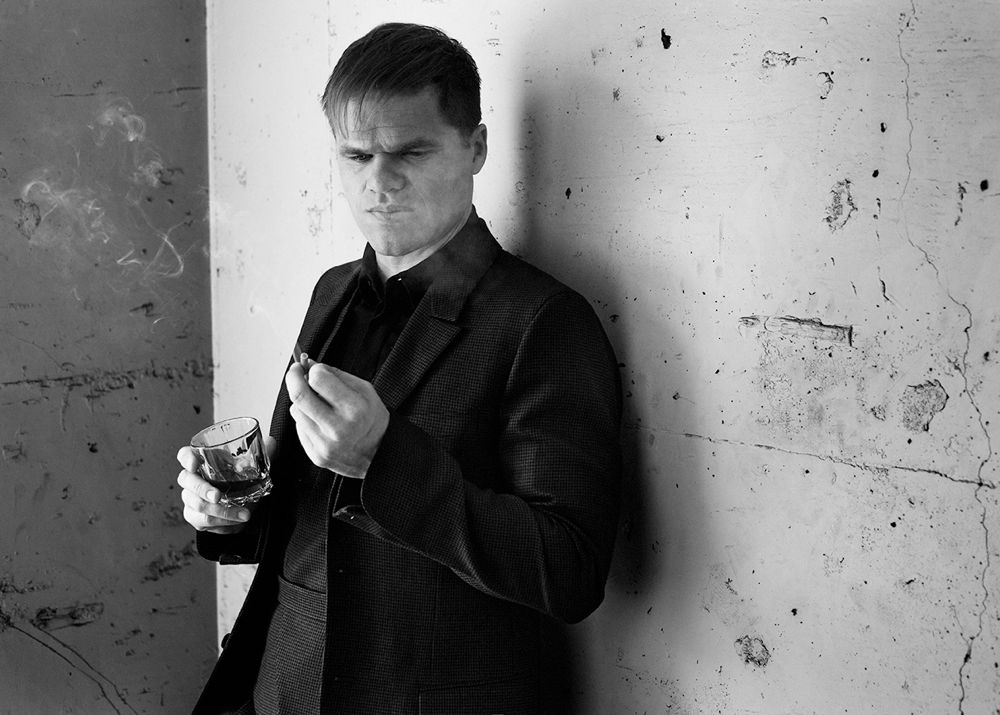 When it comes to shooting guns, the rugged Evan Jones is no novice; the actor’s filmography highlights include films like Jarhead, Gangster Squad, and 8 Mile, the Eminem hip-hop drama in which Jones’ character is memorable for accidentally shooting himself in the leg. In preparation for Seth MacFarlane’s second live-action film, the Western comedy A Million Ways to Die in the West, Jones undertook a new challenge: learning to ride a horse. “I thought it was like driving a car—you push one leg one way; you pull the brakes, big deal,” he admits. “I was shocked at how hard it is. There’s a saying, it’s total cowboy slang, ‘There ain’t a horse that can’t be rode, or a cowboy who can’t be throwed.'”

The film is set in 19th-century Arizona, in a dusty little town that teems with cholera, fatal accidents, and other such unpleasant things. Unfortunately for cowardly sheep farmer Albert Stark (MacFarlane), public gun duels are the entertainment du jour, and his girlfriend Louise (Amanda Seyfried) dumps him after he disappoints the town by resolving a conflict with reason instead of violence. In the process of trying to win her back from Foy (Neil Patrick Harris), the odiously wealthy owner of the local moustacherie, Albert meets mysterious, down-to-earth newcomer Anna (Charlize Theron), and they promptly fall in love. Anna, however, is secretly married to legendary outlaw (and abusive husband), Clinch (Liam Neeson), who vows revenge.

Lurking in the periphery of these interlocking love triangles is Clinch’s informant and right-hand man, Louis, played by Jones. In accordance with the MacFarlane tradition of inverting genre conventions, Louis is a character of breadth rather than depth; for the purpose of the film’s greater punch lines, both his identity and motivations are reduced to those of the bad guy. The role is an exercise in maintaining that essentialism—in shooting, in riding, in instigating a glorious saloon brawl—for which Jones was thoroughly prepared. “I didn’t really know how to do anything like a cowboy, so me and another actor got to go to cowboy camp,” he says. “We learned all the tricks—how to shoot six-shooters. It was a childhood dream come true. I was [also] buddies with all the horse wranglers, and they’d take me to the rodeos. I’ve been writing about my experiences with the horse wranglers, because they make such an impact on me —I’d like to make a film about them.”

The Western genre seems to suit Jones; he also appears in forthcoming Tommy Lee Jones drama The Homesman, which was selected to compete for the Palme d’Or at this year’s Cannes Film Festival. This summer he’ll also star in the miniseries Houdini alongside Adrian Brody.

We called Jones to ask about cowboy things, not expecting that the conversation would begin with Laguna Beach and end with Bukowski.

HANNAH GHORASHI: So, how’s the weather?

EVAN JONES: It’s always wonderful here [in California] but we like to complain, so it’s a little hot. [laughs] We have these fires going on in San Diego and I guess in Santa Barbara now, because it’s been so dry. It was literally 102 degrees in Los Angeles proper yesterday.

GHORASHI: Have you spent summers in New York? It also gets to be sweltering hot.

JONES: Yeah, it’s horrible. Everything is frying and everything is cement. [laughs] But, I tell you, I moved my entire life. We were in Texas, we were in Massachusetts, we were in England for a little while, we were in Pennsylvania, things like that, and then, when I was in high school, we moved to Laguna Beach, from Massachusetts. I said, “Oh. You can live in beautiful weather, near the ocean, and not be punished, and never really get cold?” So I chose to live here.

GHORASHI: Did you go to the same high school as the kids from Laguna Beach, the MTV show?

JONES: Yeah, but I’m older than those kids. They did that shortly after I left. It was bad enough when I was there, though; it’s just spoiled rich kids. It was a shock coming from a really good school in Lexington, Massachusetts, where everyone was going off to Harvard, to a school where you didn’t have to do homework.

GHORASHI: Was it like a Montessori school, where you just learn things if you want to?

JONES: Oh, no. It’s a public school, and they’re supposed to be teaching you, but they just don’t. I remember for one of my first classes, I went home, did the homework, came back, and the teacher said, “All right, hand in your homework.” But then the students said, “Oh, come on,” and the teacher said, “All right, you don’t have to hand in your homework.” And we never had homework after that.

GHORASHI: Did you ever spend time in Arizona or anywhere in the southwestern United States?

JONES: No, not living-wise. But we shot the movie in New Mexico, which was awesome. I really fell in love with New Mexico, it was gorgeous.

GHORASHI: You mentioned that the horse wranglers took you to rodeos—that seems like an opportunity you wouldn’t get otherwise.

JONES: It’s not a rodeo like you’d think. When I was growing up, my parents would take me to big, professional rodeos. But these are like… you’re out in the middle of nowhere, in an open landscape, and you’re driving along the freeway and you don’t really see anything, and then you see in the distance this little something. A lot of people drive to these ghetto rodeos, and some travel from rodeo like that to rodeo like that to make money. And people get hurt at competitions. At one point a horse went crazy and jumped into the audience.

GHORASHI: Did you form a relationship with a horse in particular during filming?

JONES: They would swap them out, so as we went along I had two or three. It was interesting—these guys bought and sold horses a lot, and they’d get excited about them like they were new toys, and they’d have a relationship with them. But they’d also sell the horses that they loved pretty easily, too. They fall in love with it quick, and then they’re like, “Oh, well, what about that one? That one’s nice. I’ll trade you, and I’ll get that one as well.”

JONES: Yeah, exactly. The horse I had was actually named 38, because that was the number branded on his side.

JONES: Maybe. [laughs] It was like they couldn’t even bother to give him a name. But these horses get treated really well.

GHORASHI:  Did you watch any Clint Eastwood movies to prepare?

JONES: Oh, yeah. My dad, Welshman that he is, loved Clint Eastwood and he fell in love with America after seeing Clint Eastwood films. It wasn’t until he got to America that he realized that all those films that he loved were actually shot in Italy. Being spaghetti westerns, Sergio Leone shot them in Italy. But yeah, I loved them. I always loved Dirty Harry—I’m nuts about Mr. Eastwood. I think he’s an amazing director, too. I watched tons of westerns in preparation for this. It was fun, because being in a comedy, you have to figure out how to capture the reality of the situation before you can layer it with the hilarity and the hijinks and the slapstick stuff.

GHORASHI: Were you a fan of Family Guy before you shot this movie?

JONES: Oh yeah. It’s unbelievable how many—what is it, pots on the stove?—[MacFarlane] has going, and what a nice guy he is. There were quite a few people there on set and as part of the crew, and they were getting to do the job they were doing for the first time because Seth was like, “Oh, come on! Come do this movie with me.” Some of them would work really hard and they’d shine and do really well, and go on to do more stuff, and some of them would not like it, and they’d go and do something else. He gives people opportunities. My great friend Jon Goldblatt, who I think goes by the name Julius Sharpe now, as a writer—he’s a comedy writer—we were debate partners, freshman year of high school in Lexington, Massachusetts. He writes for Family Guy now, and he’s in the movie too. He was a standup comedian in New York and he was having a really hard time and he was going to move back to Massachusetts to live with the folks, and there was a job opening with Craig Kilborn, who had a late night show, and as a last ditch effort, he sent him something like one thousand jokes in an email. He got hired, and he did really well. He wrote tons of Family Guys, he wrote some of the American Dad! show, he wrote some of The Cleveland Show. So when I auditioned with Seth, the first thing I said to him was, “How is it having Jon Goldblatt as your employee?” [laughs]

GHORASHI: Your character Louis and Charlize’s character Anna pretend that they’re siblings when they move into town. Why do you think Seth likes to frame his characters with a family structure?

JONES: I think it has to do with playing with genres, and the setup that you get. So in Family Guy, he’s playing with the idea of the family sitcom, and he has to set up the mother and father and the kids and their stereotypes, and then he flips those on their head, and sees where they go. But it still stays in that world, and everyone still stays in their role. It’s the same thing with the Western.  I mean, I love that Sarah Silverman, the whore, is in love with the timid guy, Giovanni Ribisi.

GHORASHI: How did you start acting?

JONES: I don’t know exactly how it started, but like everyone in America, I watched movies. Movies like Indiana Jones’ Raiders of the Lost Ark were very influential to the young lad. But I didn’t know what I was going to do and I never thought of acting or anything like that. Until sometime before my senior year of college, when I still couldn’t decide what I was going to do. I was supposed to be a writer, but I didn’t have the discipline to actually sit down and write anything. I saw Stephen Dorff on the cover of Details magazine, and I turned to my friend and I said, “Hey, I’ll do that,” and she laughed and she said, “All right, now you have to.” So I went and took an acting class and fell in love with it. I mean head-over-heels in love—it’s all I ever wanted to do since that moment.

GHORASHI: Have you written since then?

JONES: I’m writing about my experiences, slowly. Do you know the Bukowski quote, “Don’t try” ? Not “Don’t try,” as in, “Be a drunk, be an alcoholic,” or something like that. It means writing isn’t something you should have to try at, which is confusing to me.

A MILLION WAYS TO DIE IN THE WEST COMES OUT TOMORROW, MAY 30.