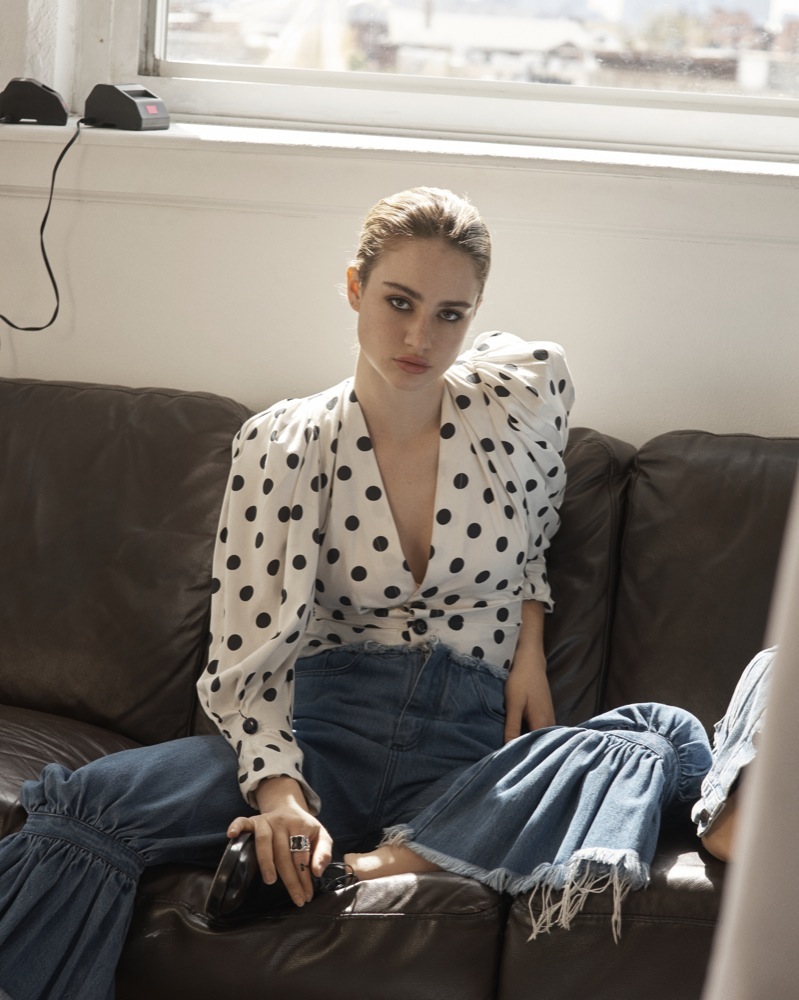 Originally, Grace Van Patten was going to study theater at USC. After graduating from Fiorello H. LaGuardia High School Of Music & Art and Performing Arts, however, the New York City native took a gap year. She began auditioning in the city without an agent, and took community college classes in psychology and philosophy so she could start college as a sophomore. Then, of course, things began to change. “I got a job that took up a school year, so I had to postpone again,” she explains on a sunny Sunday morning in Brooklyn. “Then I just kept working, so school kept getting postponed and here I am.”

“Here” is a pretty enviable place. Though it is perhaps unsurprising that Van Patten should choose to work in film—she is, after all, the eldest daughter of actor and television director (think The Sopranos, Game of Thrones, Boardwalk Empire) Timothy Van Patten—her résumé thus far is incredibly impressive. Currently she’s in previews for her first Off-Broadway play, The New Group’s Whirligig written by Hamish Linklater, and her first feature film, Adam Leon’s Tramps, in which she plays a self-possessed young woman wise beyond her years, recently started streaming on Netflix. If Van Patten weren’t conquering her stage fright, she’d probably at the Cannes Film Festival, where her next film, The Meyerowitz Stories, written and directed by Noah Baumbach, is premiering.

HOMETOWN: New York City. I grew up in Tribeca and moved to Brooklyn about three years ago.

FAMILY LIFE: I’m the oldest of three girls. My middle sister is 18 and then I have a five-year-old sister, a little baby. It’s the best; she’s so funny. She sees me working and not going to school and she’s like, “Why do I have to go to school? I can just work.” She’s grown up around all these older people, so she has this mind of a 20-year-old and it freaks me out. But it’s fun. I love hanging out with her.

INTRODUCTION TO THE INDUSTRY: I grew up, really, on the set of The Sopranos. That’s what really intrigued me, seeing the whole action of it and watching these amazing actors doing what they do best. That definitely clicked the passion in for me. But it took a while for me to really decide that’s what I wanted to do. I never watched the show. Still, to this day, I’ve never seen it.

EARLY DECISIONS: I was super into sports [growing up], so I really wanted to go to this school called Poly Prep [Country Day School], which is a huge campus school in Brooklyn with amazing sports. I loved basketball and volleyball. My parents were the ones who were like, “Just audition for LaGuardia,” and I was like, “Okay.” I really did like acting, but at that moment in my life I loved sports, and there was a thought of going to college for it. I auditioned for LaGuardia and got in, and it was between those two schools. My decision was based off of, “If I go to LaGuardia it’s going to be a lot easier to transfer to Poly Prep.” I went for it and I absolutely fell in love. I’m so happy I went there. It was a passion pit for all of these kids who are so inspiring and talented, and the teachers there were amazing. I learned so much. I did play sports at LaGuardia; it wasn’t as competitive, but we did well and I’m so happy that they at least had teams. I didn’t even know they had sports teams when I was auditioning.

FINDING AN AGENT: I didn’t have an agent when I started auditioning. I met [my manager] Emily [Gerson Saines] halfway through that year through Ansel Elgort, who also went to LaGuardia. I met her at his birthday party and we started talking and we hit it off and she was like, “Let’s have a meeting!” She’s amazing. She saw something in me and I’m so thankful for that. Once I signed with her everything started coming together. Shortly after that I signed with ICM.

TRAMPS: Tramps was my first big film role. I did do a horror movie called Central Park, but that’s not out yet. I was so excited about Tramps. I was obsessed with the script and in love with the role—Ellie’s the best. I’m dying my hair dark again, because I miss Ellie. I’m actually doing it because of the play [The Whirligig], but I was open to it because of channeling Ellie again. I learned a lot from her. She’s just so realistic. She dreams, but she does what she has to do and stays so grounded and real.

A THESPIAN IN THE MAKING: I hadn’t done a play since high school, and even then I [only] performed it for two nights. Being on stage really freaks me out, and still I have so much anxiety about performing right now. It was a big decision for me, but I decided I had to go for it. It’ll be a challenge; it’ll be something different. I’m telling all my friends, “You can’t tell me what day you’re coming,” because I’m going to be thinking about who is in the audience. One of my friends just texted me, “I’m coming on May 18th!” And I’m like, “No, you’re not supposed to tell me when!” I need to get it out of my head.

UP NEXT: Right after Tramps I started a movie called Wilde Wedding, directed by Damian Harris. I got to work with all these amazing actors: Glenn Close, Patrick Stewart, John Malkovich, Minnie Driver. I could not believe it. We filmed where [part of] Tramps took place out in the Westchester area in this beautiful mansion. It’s a family romcom and I play a lot younger. It was just a huge cast—a bunch of people on set the whole time. It was a really good experience. After that I started Noah Baumbach’s film [The Meyerowitz Stories]. That one I auditioned for and totally thought I bombed because it was months and months later that I found out I got a callback. I’d completely forgotten about it. Then, after I did the callback, I found out months later that I got it. It was this super long process and then I was just in shock. I was so excited work with Noah and Dustin Hoffman and Emma Thompson. I also just finished a movie in L.A. actually, the first time I shot outside of New York. It’s called Under the Silver Lake. It’s with Andrew Garfield and Riley Keough and Zosia Mamet, who is actually in The Whirligig.

TRAMPS IS NOW STREAMING ON NETFLIX. THE NEW GROUP’S THE WHIRLIGIG OFFICIALLY OPENS SUNDAY, MAY 21, 2017 AT THE PERSHING SQUARE SIGNATURE CENTER IN NEW YORK CITY.