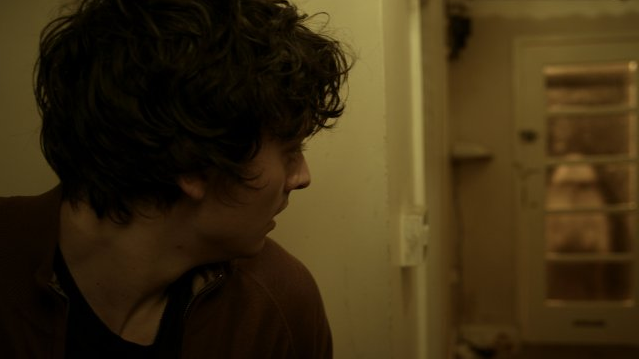 It’s rare for a first-time director/writer to burst onto the scene with a distinctive vision all his own; but that’s just what Irish director Ciaran Foy has done with his debut feature film, Citadel. In the film, Foy’s handheld camera work captures a quick-paced, first-person approach—sophisticated, yet gritty—to his subject: agoraphobic and single father Tommy (Aneurin Barnard), who lives in the dank slums of Ireland. Tommy, while trapped in an elevator, witnesses his pregnant wife attacked by a group of masked feral teenagers; throughout the film, he must face his own fears to protect his child. Foy does justice to forebears like Stanley Kubrick and David Cronenberg, externalizing Tommy’s introverted psychological disorder and taking the viewer to the brink of claustrophobia within each frame.

Citadel‘s influences are personal, as well as theoretical: At age 18, Foy experienced a terrifying unprovoked attack by a group of hooded figures and subsequently developed agoraphobia. Eventually he recovered, deciding to work through and recreate his personal nightmare onscreen. Citadel went on to win The Midnighters Audience Award at South By Southwest. In advance of the film’s release, Foy spoke to Interview about overcoming his agoraphobia, revisiting his nightmares, and his love of film.

NIKI CRUZ: You have such a specific vision as a new filmmaker. Where did your history with film begin?

CIARAN FOY: I guess in a way, I was always a filmmaker at heart. The first movie my dad took me to see when I was five years old was Return of The Jedi; I just wanted to be a filmmaker ever since. It wasn’t until I was 16 that I got a camcorder. I began to make little shorts and became obsessed with my favorite filmmakers, just to break down their movies into shots, and kind of self-taught myself a lot of stuff. Then finally I shot four shorts and then made Citadel.

CRUZ: Citadel is as a very intimate story. Could you detail your own experience that led to making this film?

FOY: I kind of describe this film as a half-psychological horror, half-autobiography. When I was 18, I was a victim of a pretty vicious, unprovoked attack by a gang, and that attack brought out the condition of agoraphobia. So in many ways, it was this weird fusion between my struggles and battles, and my eventual recovery mixed with my nightmares, and my reoccurring odd imaginations and my love of genre films, which ultimately became Citadel.

CRUZ: Your relationship with Aneurin Barnard must have been important with such a personal story. How did that flesh out?

FOY: Pretty well. I hit it off straight away with Aneurin. I was looking for somebody who could play a young father with this condition, but at the same time I was looking at guys who were 20 to 23, and you know, what I found was with a lot of these guys was at that age, they’re actors, they’re good-looking, they’re extroverted people. In many ways, a lot of them are winners, they’ve always been winners, and that’s in their experience of life. They kind of have a limit of experiencing failure and experiencing the ways that life can sort of kick you when you’re down. Aneurin had an immediate kind of weight and emotional range that was different from the other guys; he felt older. What I discovered was he had kind of a similar experience to me. Straight away, we were sort of speaking the same language. It was a perfect collaborative process. He grilled me and wanted to know what it was like to have a panic attack. During prep, we didn’t do any rehearsal, Aneurin just wanted to spend time with agoraphobic counseling groups and people who had chronic agoraphobia, who wouldn’t leave their house for a year or two.

CRUZ: Were you ever afraid of being pulled back into that state of mind throughout the process of the film?

FOY: During the writing, yes, but during the filming, no. The filming was so chaotic. We had 22 days to shoot the film, so I had completely no objectivity in making the film other than what’s the next shot, what’s the next setup. The writing took a long time, so during that process I really threw myself into it, and in the course of this I started baiting my mind in scenarios and situations that I wanted to get, and it had an effect on me. I didn’t know it at the time, but I was actually echoing the main character, so that in the middle of writing the script, I started taking steps backwards. I was worried that this wasn’t a good thing to do, but it was very therapeutic for me, facing my demons every single day.

CRUZ: Agoraphobia is such an introverted experience. Visually, the audience is pulled into this paranoid frame of mind right away—the film feels claustrophobic. How were you able to capture that?

FOY: I wanted the audience to experience what it was like to be an agoraphobic—and because it’s such an irrational fear, it almost kind of requires you to go into that realm of the fantastic, and there was a nice match with that. You’re seeing things in the shadows that aren’t there, and you’re hearing things that aren’t there. In many ways, it allows somebody to be afraid to approach the outdoors. What I wanted to do was to play up the aspects of the experience. I wanted everyone to experience what he was experiencing, to hear what he was hearing; and through that we would experience the world and how he saw it. It allowed the audience to have no objectivity, and they were sort of forced to delve into his head. Hopefully they had a chance to find empathy for him.

CRUZ: “Feel the fear and let it pass” is such an important mantra in the film. We see Tommy make that journey through the movie. Did your own experience getting to the other side of fear mirror Tommy’s?

FOY: Yeah. I took on things that were said to me in real life as metaphors, and made them manifest as real. For example, one of the key things really helped with the recovery was seeing the free counselor in the college, and we were talking about body language, and that when you’re afraid, your body says you’re afraid. It’s almost like the street folk can see your fear, and you can walk in the worst area imaginable, but if you can pretend to know where you’re going, they don’t see you.  Even though she was talking in metaphors, I thought that would be a great concept for a film. I talked about things that helped me deal with what happened, and from that it manifested in something tangible.

CRUZ: As a newcomer to this medium, you do a fantastic job of riding the wave of a psychological thriller. Were you inspired by any particular directors?

FOY: I have all of my favorite directors kind of floating around in my head at all times. The guys I love are quite varied. I’m a big fan of Steven Spielberg, but at the same time, I’m a big fan of David Cronenberg. I think in terms of directing the film, I looked at people like David Cronenberg, Adrian Lyne’s Jacob’s Ladder, Stanley Kubrick’s The Shining, so people like that, but in many ways what I wanted to do with the film was sort of—I didn’t want to reference other films, because I wanted to feel myself through it, so that it would hopefully take on a fresh feeling. I want, one day, for people to look at movies and say, “Hey, that feels like a Ciaran Foy film.” At the same time, I think it’s impossible not to have your heroes in the back of your head at all times.

CRUZ: This is your first film out the gate, and you’ve already received acclaim and won the Midnighter’s Audience award at South By Southwest. What’s coming up next for you?

FOY: What’s next for me is a science-fiction film that I’ve recently been attached to. I think there’s going to be an announcement pretty soon but unfortunately I’ve been told I can’t say the name of it. It’s a film that I’m going to rewrite the pre-existing draft, so that’s what’s next. At the moment I’m still on the festival trail and doing press for Citadel, but I’m itching to get back to work.

CITADEL IS OUT IN LIMITED RELEASE THIS FRIDAY, NOVEMBER 9.