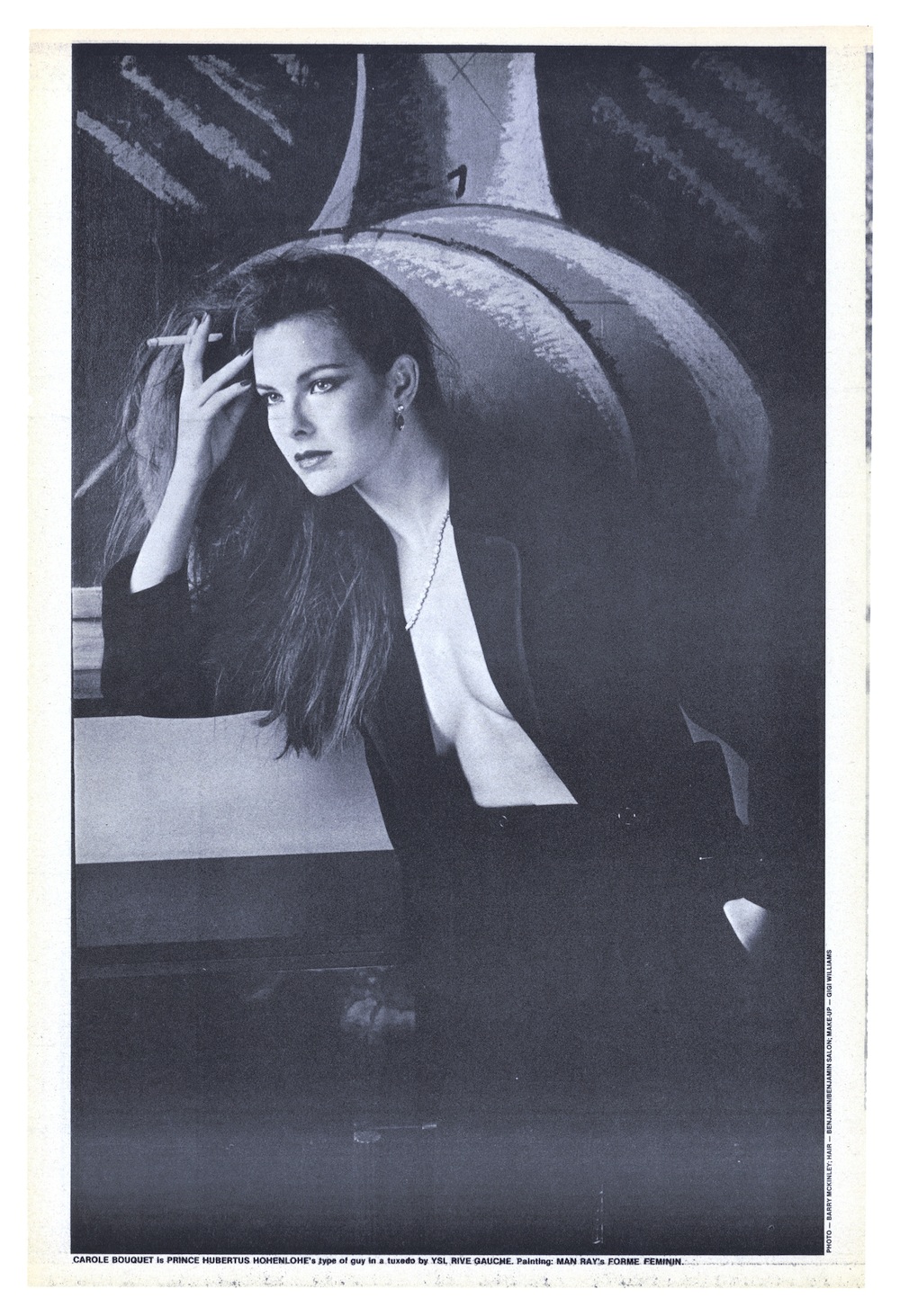 ABOVE: CAROLE BOUQUET IN UNFORGIVABLE.

The beautiful Carole Bouquet is an icon of the French cinema. Her debut came as a late teenager, working with Luis BuÃ±uel on his final film, That Obscure Object of Desire. It was the beginning of a long journey which saw her become internationally famous for her role as a Bond girl in For Your Eyes Only and the face of Chanel. In her new film, Unforgivable, she works with the writer and director André Téchiné, a master at presenting complex relationships on screen. She plays Judith, a real-estate agent who, after marrying a crime novelist and moving to an isolated house in Venice, helps him track down his missing daughter.

Bouquet sat down with Interview to talk about her early days in New York with Andy Warhol, what Luis BuÃ±uel taught her, and the complexities of her character in Unforgivable.

CRAIG HUBERT: You were on the cover of Interview for Obscure Object of Desire.

CAROLE BOUQUET: That was centuries ago! That was not yesterday. When I arrived in New York when the film was shownâ??already to make a movie with BuÃ±uel was a shock. I was 18 and at the National School of Theater. I just got to the school. I decided to be an actress, and the day after, I was an actress. That was quick and very scary at the same time. When Obscure Object of Desire came out in France I felt guilty for my friends at the National School who weren’t in the movies. The whole thing was turmoil. I arrived at the premiere in Paris crying, nothing was exciting the way it should have been. I was shy, I thought I was bad. Then I arrived in New York and the response to the movie was different. In France, the interviews were only with BuÃ±uelâ??there weren’t even photos of the actress. Everything was on him, and that was very good for me. New York was different. I came to the New York Film Festival, left, and then came back to do a tiny movie with a man named Richard Hell.

BOUQUET: Yes, one of the worst movies I did. [laughs] People were throwing bottles of beer at the screen when we showed the film. Because of the film with BuÃ±uel, I did some photos with Interview. When I came back to the set of Blank Generation, they said, “By the way, you know Andy Warhol: can you ask him to be in the film?” I said, “What do you mean, I know Andy Warhol?” They assumed I knew him because of the photos. I was extremely shy, but at that time in New York I was going out to dinners every night at Elaine’s, where the whole world was going, and people were coming up to be and saying congratulations. I was thinking, “What for?” But I started to like it, to tell you the truth. It wasn’t unpleasant. So I started seeing Warhol every nightâ??we were also going to Studio 54â??and I dared to ask him to be in movie. He was such an icon. He said, “Yeah, of course I’ll do it.” Like I was asking him if he wanted a drink. It was not a problem. You look at it years after because you don’t realize what you’re going through when you’re going through it. For example, when Obscure Object was nominated for an Oscar, I didn’t goâ??imagine an actress not going todayâ??and couldn’t care less. I was at Studio 54 that night and they were showing it on the big screen. It won, and I didn’t even look at the screen. I was having a party. [laughs]

ABOVE: CAROLE BOUQUET IN INTERVIEW, NOVEMBER 1978

HUBERT: From BuÃ±uel, I want to bring the conversation to André Téchiné. How important is the director to you?

BOUQUET I would have done anything with André Téchiné. We knew each other for six years but never worked together. When he said I want you to be in my movie, I said yes without even reading the script, hoping, because I really wanted to work with him, that the script was really good. I would have still done it even if I didn’t like the script, to tell you the truth. So when I read the script, my heart was beating strongly, hoping I would like it. I was relieved. Then he kept working on, and it kept getting better and betterâ??from my point of view. I was extremely happy to be on the set of this film. BuÃ±uel was a genius and made a beautiful movie, but at that time I couldn’t enjoy it. It changed my life and I give him all the credit for that. It’s extremely the opposite on this film. I enjoyed everything on this film from the first day.

HUBERT: Is that always the case now?

BOUQUET: No. The problem with movies is that you see from the first dayâ??you’re on a train, and if the movie is not going in the right direction you know it right away. Sometimes, you can’t get off the train, and the whole experience is painful. So on this film, beside the script, and spending time with André Téchinéâ??three months in Venice isn’t bad eitherâ??it was three months of being happy, watching him work. I would go and watch how he framed shots because that is very important to him. He works like a painter. Sometimes he takes ages, and does 40 takes. I hate that! [laughs] Sometimes he does one. You have to understand it has nothing to do with you, it’s not personal. We got to know each other, and we really shared the movieâ??we all did. It’s rare, those moments. It doesn’t happen often. Sometimes it’s a little miracle.

HUBERT: How does Téchiné work with his actors? You said he takes care in his compositionsâ??does he talk to the actors beforehand? Did you do any kind of rehearsal?

BOUQUET: No. Costumesâ??he takes real care with the costumes. He has a costume designer, but he is very involved in the process. You work with him on the looks. Which, by the way, I was taught by BuÃ±uel, without knowing he was teaching me something.Â  He would never answer a question. I wouldn’t have dared ask him a question, but Angela Molina, who had already done movies, was asking him, “Why should I do that?” He would walk awayâ??he would never answer a question about “why.” But BuÃ±uel was very precise in other waysâ??sit like this, your glass is right here. You can have millions of explanations of “why.” I saw Kevin Spacey do Richard III the other day. If you put psychology on Richard III it’s endless. Just say the wordsâ??the words are enough. I mean, sometimes the words are bad, and the director is shit. [laughs] Then you’re in trouble. But if you work with a good one, the image is going to be answer to “why.” Physical things are going to be the way you build, not the psychology.

HUBERT: So in the script, the words, what interested you about the character of Judith?

BOUQUET: Complexity. I love the fact that Téchiné says, with the turmoil, with the vicissitudes, with the pain we inflict on each other, love is possible. Sometimes the roads cross and it’s worth doing it. Go for it, it’s worth it. That’s what the film is saying, and I think it’s extremely generous, and being generous when you’re 20 is easy, but somebody as sharp as André [Téchiné] saying, yes, love is possible. Life is going to decide. Don’t lose it, it’s a treasure. It’s going to be painful; it’s going to be an adventure, a roller coaster. Life is a roller coaster and it gets worse when you get old. Contrary to what you think, that it gets better when you know moreâ??no, the more you know the more painful it is. You’ve been hurt. You arrive with a million scars and your armor is not thick. The more you age, the more you’re fragile. But do it anyway. Go for it. Otherwise it means death.

HUBERT: Téchiné’s loves to present characters who are flawed, who have thin armor, as you say.

BOUQUET: That’s who we are in life. Then we organize ourselves. We have to wake up in the morning. We have to pretend. All of us have different levels of this. I was in Africa two weeks ago, north of Ghana. Ask me how the life of those women north of Ghana compares to our life, that’s a different story.

UNFORGIVABLE IS OUT IN LIMITED RELEASE THIS FRIDAY, MARCH 23.