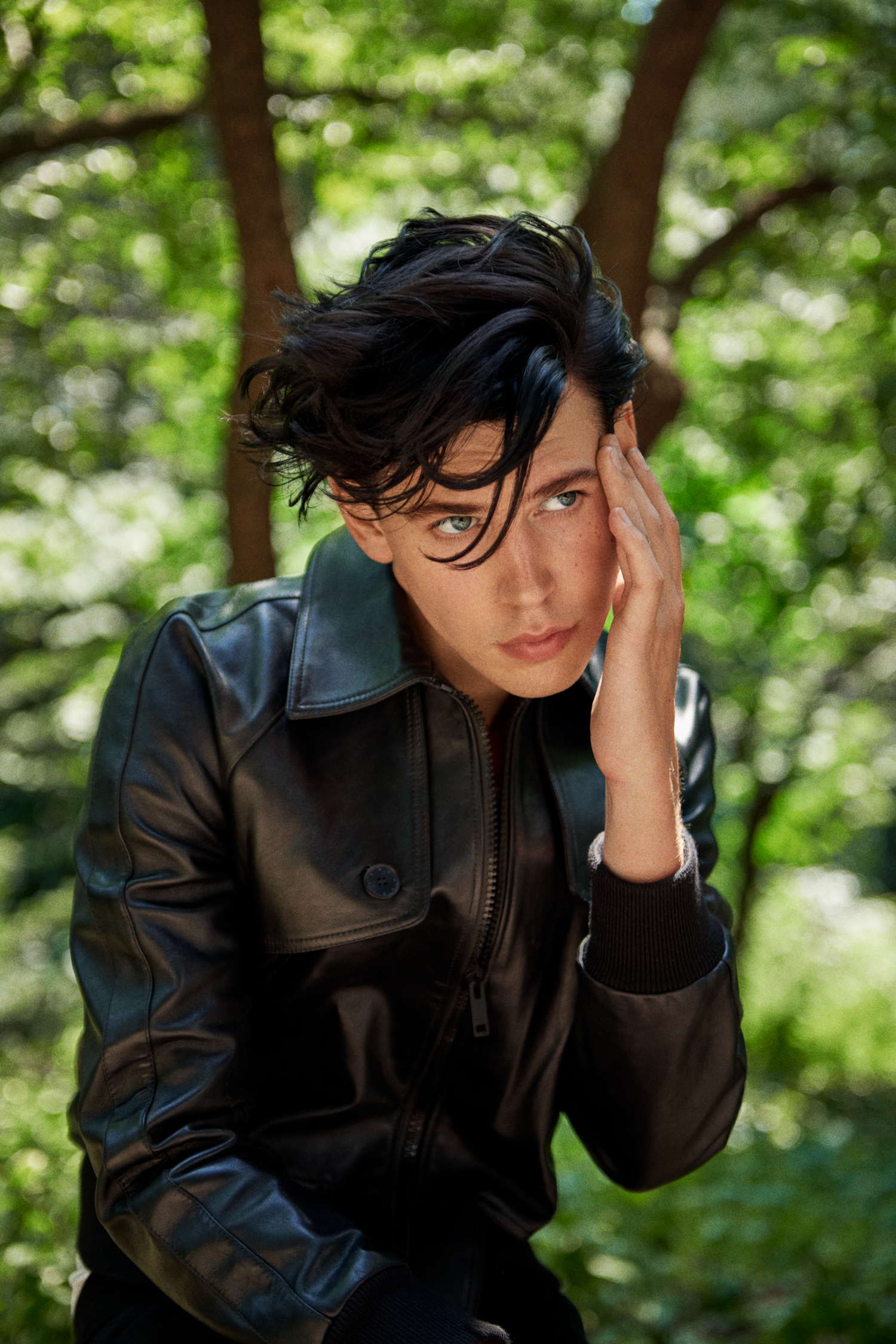 Jacket by Givenchy. Jeans (worn throughout) by Saint Laurent By Anthony Vaccarello.

After years as a heartthrob-for-hire on a string of teen TV shows, Austin Butler’s career took a turn for the big leagues when, earlier this year, he was cast as the main character in Baz Luhrmann’s upcoming Elvis Presley biopic. Here, the 28-year-old California native, who recently appeared in Jim Jarmusch’s The Dead Don’t Die and Quentin Tarantino’s Once Upon a Time… in Hollywood, answers some questions that Andy Warhol posed to Matt Dillon in 1983, when the 19-year-old actor was similarly on the cusp of mega stardom.

ANDY WARHOL: How did this happen to you? When did you start making movies?

AUSTIN BUTLER: I started acting when I was about 13 years old. I stumbled into doing extra work, so that got me onto sets in a very low-pressure way. Prior to that, I had been a very, very shy child. Being on a set with other children, there wasn’t this hierarchy,which there can be sometimes. That really taught me a lot about how I want to conduct myself in any environment. I started going to acting class and learning that there was a craft to it, and then I fell in love with it. Then it was a slow process of going through hundreds of auditions, and you only book one thing. I remember the days of being so grateful to just book one line on a TV show.

WARHOL: Did you always want to be in the movies?

BUTLER: I didn’t realize it was a possibility, but I think I felt most free when I was playing pretend. I would watch a movie, and then I would put on the clothes that I could find that were most similar to a character I liked. I would get really dressed up to then destroy myself in some way in an action scene. I look at my job now and—I mean, in Once Upon a Time… in Hollywood, they paid for my horse lessons. I got to train four hours a day for months. Now people are putting these incredible costumes on me, but it’s just a very elaborate version of what I was doing as a child.

WARHOL: Of all the films you’ve made, do you have a particular favorite?

BUTLER: I think it’s very hard. I asked Denzel [Washington] this question, and he said his answer is always “the next one,” so that’s kind of my thing right now.

BUTLER: Anything that scares me and challenges me and causes me to have to dig in to parts of myself that maybe I would not otherwise.

WARHOL: Do you go to the movies often?

BUTLER: As much as I can. That’s one of my favorite pastimes.

WARHOL: Do you want to stay away from romantic leads?

BUTLER: There was a point where, in an effort to be thought of as, for lack of a better word, serious, I thought maybe that would have been the way to go. But lately when I think about things that really touch my heart, love is the most important one. I don’t think that I’m really trying to stay away from that. Some of my favorite movies are romantic, like The Notebook. I absolutely love that film. It breaks my heart every time.

WARHOL: Have you taken any time off?

BUTLER: I went to Sardinia recently and that was very rejuvenating.

WARHOL: Are you in love with anyone right now?

WARHOL: Do you keep the relationship quiet?

WARHOL: Is it hard being separated when you’re shooting on location?

BUTLER: Yes, it is, but there’s beauty in it as well, because the old cliché of “absence makes the heart grow fonder” is really true. It’s a cliché for a reason. And thank god for the technology we have these days. FaceTime dates help for sure.

WARHOL: When you fall in love, do you fall really hard? WARHOL: Have you ever had your heartbroken?

WARHOL: Do you have trouble finding scripts you like?

WARHOL: Who are your favorite authors?

BUTLER: I like to play music. Spending time with my dog is key—and, of course, my family and friends. That’s always the place I go for peace.

WARHOL: What kind of dog do you have?

BUTLER: I’ve got a little terrier rescue; we don’t quite know what she is. My mom actually rescued her off of a woman’s balcony. This person wouldn’t feed her all day, so my mom started feeding her and then eventually found out where the woman’s door was and started pestering her, saying, “Can I just watch your dog during the day?” Eventually she let my mom babysit her during the day. Then I inherited her from my mom.

WARHOL: What places do you want to visit?

BUTLER: I’ve really been wanting to go to Morocco and Japan. And Iceland.

WARHOL: How do you create the feeling of anger or despair when you act?

BUTLER: I’m always looking for what triggers me in real life and in imaginary circumstances, and just finding ways of tapping that as authentically as possible.

WARHOL: Do you sing?

BUTLER: A little bit. I’m singing a lot more lately than I have been in the past.

BUTLER: I play the guitar and I play the piano, and my first instrument was the violin. I started playing the violin when I was in elementary school. I got a guitar when I was 13 and fell in love. I would play for eight hours a day and that became my obsession.

WARHOL: Do you want to be a rock star?