Ari Aster Built a Swedish Village Just to Burn It Down No subway line reaches far west enough to hit Red Hook, a waterside nook of Brooklyn so trendy it’s cut off from the rest of the city’s circulation. The neighborhood’s coveted space and quiet feeds the New Yorker’s romantic notion that the city exists entirely separate from the world outside it (or at least New Jersey). One visit to Red Hook’s IKEA, that gargantuan LEGO block brimming with clean-lined furniture and cinnamon buns, should cure any hopeless romantic’s head cold. But on one Saturday morning, the sheer horror of IKEA became apparent: with its quintessentially Swedish ethos of simple living, the world’s largest furniture retailer had become infested with New Yorkers clinging to its white-walled Eden.

I was joined there by Ari Aster, the writer and director of A24’s horror hit Hereditary, anxiously evading the artillery of shoppers and settling into a room display enclosed by walls that read “Where the heart is…” Aster’s latest film, Midsommar, follows a pack of Americans and Ph.D bros as things get culty at a midsummer festival in their friend’s remote Swedish village. It only made sense, then, to place ourselves in the throes of the nearest Swedish cult (Google Maps directed accordingly). We watched New Yorkers push their carts through IKEA’s unending labyrinth, piling on shag rugs and boxed furniture with the same fervor as Aster’s uncouth Americans, hungry for the white-laundered garb and immaculate purity of rural Sweden. We were more than once tempted to join the IKEA FAMILY, the all-caps loyalty program of the retailer’s most devout. At my parking spot, an orange sign glowing under a spotlight “reminded” me to sign at any of the IKEA FAMILY kiosks distributed throughout the store, and at the front of each rolodex set on every table of the cafe, an ad invited us to their “Midsummer Smörgåsbord,” an all-you-can-eat Swedish buffet that IKEA FAMILY members could attend at a discount. Inside our enclave, Aster got his photo taken on a floral Fyresdal daybed beside a stuffed bear sitting in a Tossåsen wall shelf. From there, we moved to the Ektorp 3-seat sofa placed in the middle of a dimly-lit micro-living room, where we would conduct the bulk of our interview, occasionally elbowed by customers. “There’s always been something sinister to me about these miniature recreations of real spaces,” he told me, watching couples linger on platform beds and kids stain marble countertops with grubby fingerprints in a nearby imitation kitchen. It was Aster’s first time in IKEA, and he was a bit stiff among the faux habitation on display. He referenced the dollhouses and figurines in Hereditary, which Toni Collette’s Annie uses to recreate and harness the horror surrounding her. “I guess these aren’t so different from the things I’m doing. The dollhouses functioned as a metaphor for what is often going on in these films, that you are assembling a cast of characters simply to move them around like chess pieces and manipulate them as you wish.”

In Midsommar, Aster and his production team constructed ten of their own life-sized dollhouses around one central field to create the pagan village at the heart of the film. “We’re building this little world so that we can then place people in it and proceed to torture them. Then we’re done in two months, and it’s time to destroy the little world,” he said. “There’s something perverse about the act of creating something beautiful just to destroy it. It feels kind of wasteful, but maybe there is something significant in the transience of the whole thing,” which could be said of the transience of feeble IKEA furniture. The night before our interview, I dreamt that those houses were filled with the same Tarva bed frame I sleep on at home. I awoke in a sweat, imagining the fiberwood slats snapping under the pressure of the film’s flower-crowned Swedish villagers. Something felt awry, and it wasn’t just the thought of hipsters collapsing on bed frames or tipping dressers and crushing children. I think our suspicions began at the cafe, where a sign offered shoppers a free cup of Swedish coffee before 10AM—despite the fact that all IKEAs open at 10AM. How were we ever supposed to get our free Swedish coffee, and what happened to shoppers in these witching hours between open and closing time? During fika—Swedish for coffee break, a sign informed me—the aseptic ivory walls and counters led us toward the cafe. Here, photos of the menu options—which included salmon lasagne and of course, Swedish meatballs—hung from the ceiling above their real-life counterparts, which sat ugly en masse behind a glass shield. Before we knew it, Aster and I were sharing a plate of meatballs that I suspect were spiked with some sort of hallucinogenic mushroom. Maybe I just had too much Midsommar on my mind.

But beneath all of the blood and pagan pageantry, Midsommar is a break-up movie about where you choose to make your home. Do you find your home in a lover or a community? Do you need a home at all? Aster wrote the film, which centers around a codependent relationship, while he was going through his own split. And after a day spent rolling through the painted cubicles of IkeaWorld, the time had come for us, too, to part ways. So we bid a bittersweet farewell to our imitation home “where the heart is” and headed to the exit. But, as all IKEAs are designed like Hell’s Guggenheim, once we started our way through the maze, it was impossible to get back without repeating the whole loop through the store. About three-fourths of the way out, sweating, beaten to our wits end by the Swedish labyrinth, Aster turned back to me and said, out of breath: “This could be reflective of a relationship that never ends.” 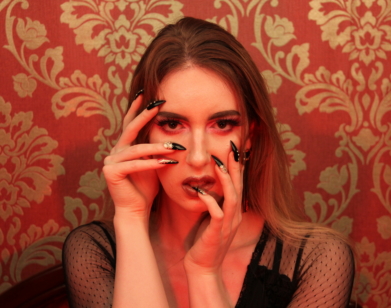