Photographed by Till Janz Early in her career, Anya Taylor-Joy was quick to get labeled a “scream queen,” the cliché used to describe a female actor whose profession is peril. And while it’s true that the 24-year-old performer’s 2015 debut, The Witch, was a bloodcurdling nightmare—ditto for her follow-ups Morgan and Split—Taylor-Joy, with her ferocious intensity and spell-binding vulnerability, has elevated herself above the trappings of any single genre. This year alone, Taylor-Joy has appeared as the title character in Autumn de Wilde’s modernized adaptation of Jane Austen’s Emma, will play a Russian mystic in the comic-book-inspired The New Mutants, and was set to make her return to horror in Edgar Wright’s pandemic-delayed Last Night in Soho. Next month, she’ll carry The Queen’s Gambit, a seven-episode miniseries based on Walter Tevis’s 1983 novel about Beth Harmon, an orphan who rises to become a chess grandmaster while struggling with addiction. Just before she was set to film her next role in the Viking saga The Northman (a reunion with The Witch director Robert Eggers), Taylor-Joy connected with her friend, the actor George MacKay, to discuss, among other things, growing up, playing chess, and battling demons.

GEORGE MACKAY: How are you doing?

ANYA TAYLOR-JOY: I’ve just moved into an isolation house to get back to work. There are growing pains for everybody, but we’re all figuring out how to keep each other safe. It’s going to be an adventure.

MACKAY: I got a sneak peek of The Queen’s Gambit, and when I say sneak peek, I watched the whole series, which I absolutely loved. What are some of the things you learned from doing that show?

TAYLOR-JOY: I’m usually very instinctive. I don’t like to prepare too much. You, however, really prepare, and the first time we worked together, that intimidated me a bit. Playing Beth, I had to do a lot more of that, because when you’re charting somebody from the ages of 15 to 21, you have to be really aware of what she experienced: “Has she ever liked a boy? Does that change the way she interacts with men now? Has she experienced a maternal figure in her life?” And we were jumping around a lot, too. We’d shoot parts of episodes three, five, and two, all in one day, and I’d be changing my wig and trying to play being 15, and then jump forward to being 21, and then being 19, so I had to keep a bit more of a tally of where I was at in this character’s life story.

MACKAY: There is something so evocative about the time period it’s set in.

TAYLOR-JOY: The first music I fell in love with was from the ’60s. I’ve always been very drawn to that time period. It was a seismic moment. People were really shaking things up. And I think what’s interesting about Beth is that she’s weirdly out of it in this strange way. She’s not necessarily modern. Women are still not yet equal, which is ridiculous, but in the ’60s we certainly weren’t. Beth doesn’t see that. She is so deeply understanding of her own genius that she doesn’t understand why anybody would ever think that her being a girl makes her less than, which is a wonderful way to interact with the world, but I had to step back from the idea that I had of the ’60s and let her be this odd little space creature. Shirt and Skirt by Burberry. Hat and Shoes Stylist’s Own. Earrings by DSquared2.

MACKAY: She is such a singular character, and because of the jumping back and forth through time, you really can observe the nature-versus-nurture sides of her—both the things that will never change, and the experiences she has that do change how she interacts with the world.

TAYLOR-JOY: It was an exercise in restraint. In our society, we want everything immediately. We’re so used to quick jump cuts, but we really took our time telling this story. I hope when audiences watch it that they feel like they’re reliving a memory, because that period of time, when you’re an adolescent heading into your early twenties, we wanted to take the time to show that—and have faith that the audience would stick around and allow it to pay off. Seven hours—that sounds a bit terrifying. This is seven hours of me growing up, playing chess, and battling demons. I really hope they stick around for it.

MACKAY: It’s not just about chess. Being in my late twenties, I assumed I’d be completely sussed at this stage, and I’m not. There’s never that moment where absolutely everything aligns. I think, particularly for people in our age group, this is a perfect story, because we’re in that new middle-ground before we have our own families or have gotten to where we want to get in our careers.

TAYLOR-JOY: There’s a great line in it where Beth is talking to another chess player who’s very young, and he says, “I’m going to be world champion by the time I’m16.”And for the first time ever, she says to him, and also to herself, “What are you going to do after that?” You and I both started working when we were really young, and there’s this idea that there’s a peak of the mountain, and when you get there, everything’s going to be great. And for the first time ever, she’s like, “But wait a second. There’s a whole lot of life to live after you reach your goal.”

MACKAY: You’re one of the busiest people I know, and I saw a lot of you in this story, the speed with which a life can be lived when it’s got a singular focus.

TAYLOR-JOY: I’ve had to learn to be kind to myself, and I think characters are a therapeutic way for me to do that. When Beth and I aligned, I’d had a really crazy year, because I made Emma, had a day off, then I did Last Night in Soho, had a day off, and then it was The Queen’s Gambit. For the first time, I was like, “I need to take care of myself in a very aggressive way, because otherwise I’m not going to be able to do this well.”

MACKAY: In the spirit of transformation, tell me a wee bit about The New Mutants and the role of Illyana. TAYLOR-JOY: She was the first character I ever played who stomped into a room. The first day on set, I was like, “I’m about to be a real dick to a whole bunch of people, then grow a massive arm and have a huge sword. All self-consciousness must go out the window, and you’ve just got to throw yourself into this right now.”

MACKAY: Do you change your performance based on the world you’re in, or do you just stick to the truth of the matter at the core of it?

TAYLOR-JOY: You have to make sure that you’re in the same movie as everybody else, because if everyone’s doing something that’s a bit light-hearted, and you’re over in a corner preparing like an actor prepares, it doesn’t necessarily fit. You have to clock that.

MACKAY: Your next project is The Northman with Robert Eggers, who you collaborated with on The Witch. How do you feel about working with him again?

TAYLOR-JOY: The most special thing about Robert and I is that nobody else understands the jump that our lives took after The Witch. We had never made a movie before. We didn’t know if anyone was ever going to see it, and, literally overnight, the film exploded. It was never something we were expecting to happen. Now we get to play together again, and do the thing that we both love together. It feels like going home.

MACKAY: I can’t wait to see what that next collaboration brings. From Left: Cardigan, Skirt, and Briefs by Miu Miu. Bra by Myla London. Earring by Alan Crocetti. Socks Stylist’s Own. —— Jacket and Skirt by Prada. Bra by Fleet Ilya.—— Top and Tights by Prada.—— Top by Monique Fei. Skirt and Pants by Coperni. —— Jacket by Y/Project. Shirt by Coperni. Earring by DsQuared2. 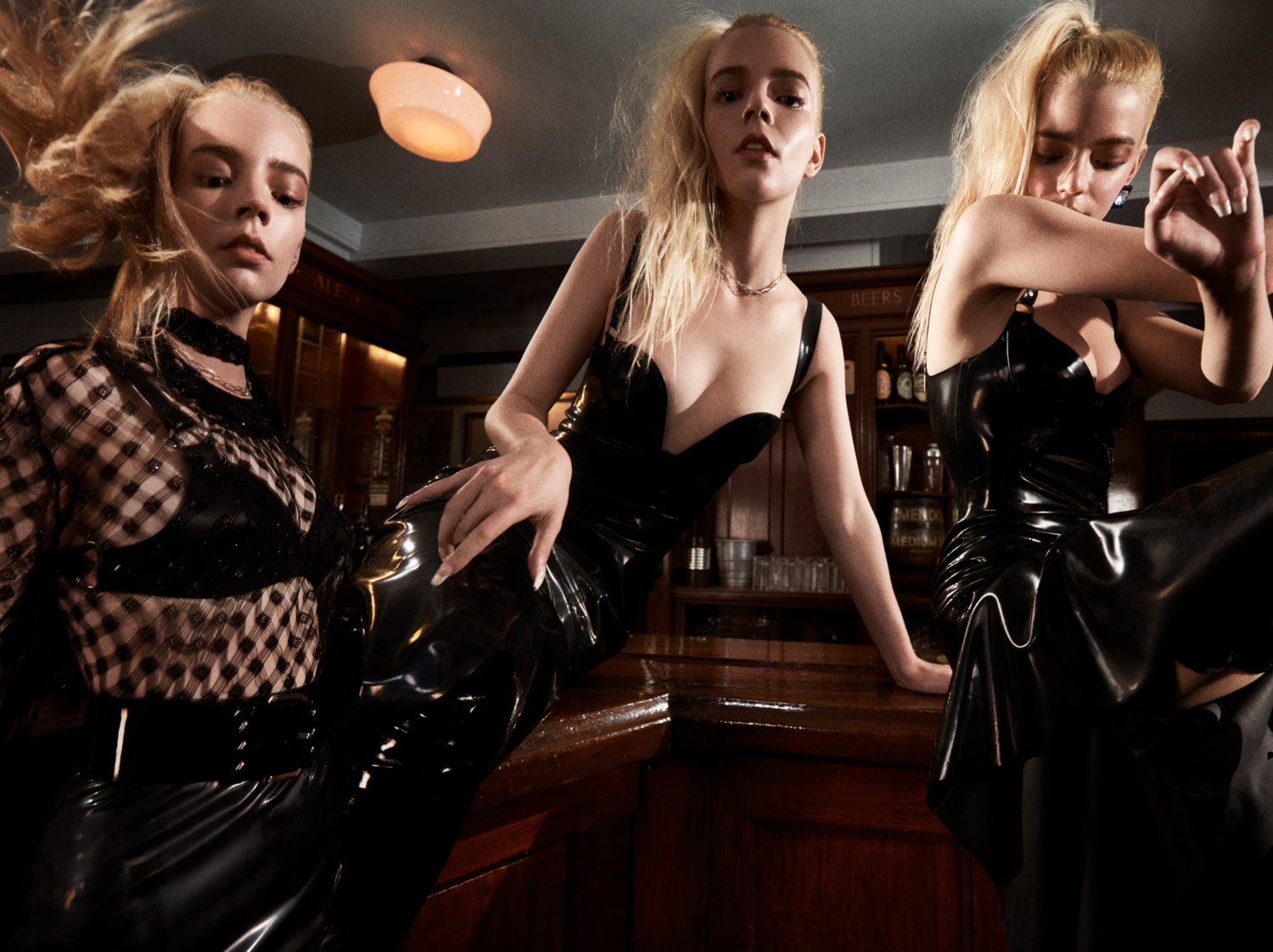