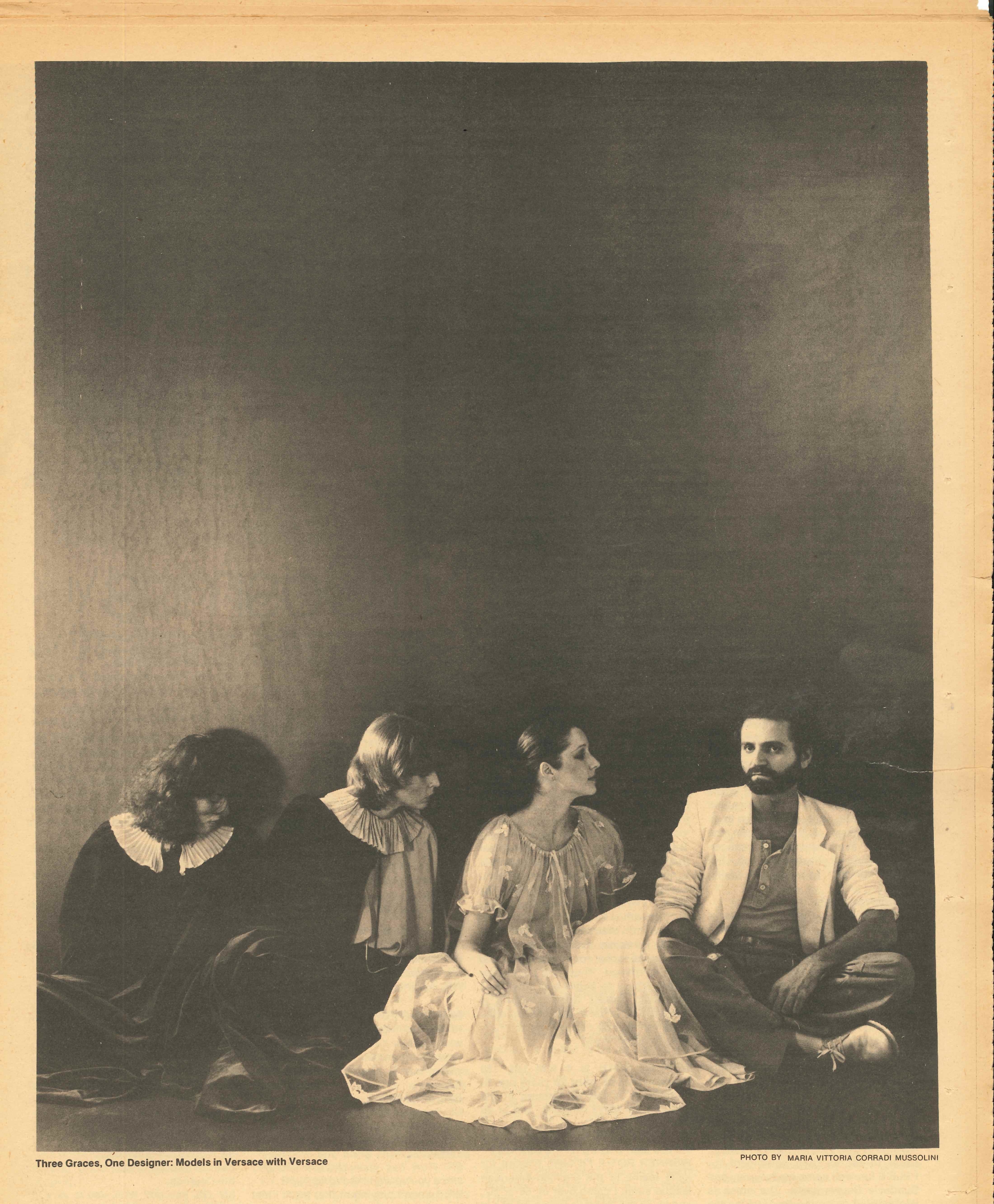 In the fashion world, there are really three cities that matter: New York, Paris, and Milan. Historically, these hubs of creative energy have fostered fledgling talent and provided a forum to display the newest groundbreaking designs. The most iconic names in the industry have been based in any (or all) of these cities. The late great Alexander McQueen cut his teeth at Paris’s Givenchy, while Marc Jacobs has worked on both sides of the pond, at Louis Vuitton and for his own eponymous American label. And now, as Milan’s menswear fashion week draws to a close, we await Paris’s upcoming haute couture shows—to run July 6 through July 11—with bated breath.

In the meantime, we’ve dug out this November 1977 interview with pioneering, Milan-based Italian designer Gianni Versace. Though Versace began designing for other companies, his success led him to found his own label under his own name, which today is known as one of the most luxurious names in haute couture. His sister Donatella took over the fashion house as vice president and primary designer after Versace’s untimely death in 1997. Here, the late visionary discusses his influences—from other designers to his Calabrian roots—and the evolving scene and culture of couture. —Katherine Cusumano

Gianni Versace was born in Calabria and lives in Milan, where he started to design fashion only six years ago. Now he has the biggest ready-to-wear business in Italy. He designs for three different companies: Callaghan (knitwear), Genny (sportwear) and Complice (better RTW), plus a leather collection under his label and a license for bags and scarves. His clothes are sold all around the world from Germany to Japan to the United States. He lives in a luxurious contemporary apartment and he drives a very elegant brown Range Rover. He is the only Italian designer to have a studio with seven employees and get royalties for the companies he is working for.

DANIELA MORERA: You are the miracle of Italian fashion.

GIANNI VERSACE: Why do you call me the miracle?

MORERA: Because you started suddenly with one collection and the day after you were famous.

VERSACE: But I have my background anyway and I work so hard. I learned to work with my mother, who had an haute-couture business.

MORERA: But you had a boutique many years ago?

VERSACE: I was buying for our boutique, the best from French and Italian designers, from Karl Lagerfeld to Walter Albini.

MORERA: Buying is an incredible school.

VERSACE: I spent a lot of time on research. My last collection was inspired by the Commedia dell’arte, and took me two months of collecting documents from that period.

MORERA: I want to talk with you about Calabria. I like Calabria for its strong traditions. First, are you really Calabrese?

VERSACE: My father is, but my mother is Dutch by origin and my grandparents were Greek.

VERSACE: I remember many aspects of regional traditions.

MORERA: The country-women all dressed in black with the handkerchiefs on their heads?

VERSACE: Oh, yes, it was so beautiful to see them wearing many skirts one on top of the other. Totally black, but one different from the other: one plain, another one plisse, the following one with ruffles and corsets exactly like the Saint Laurent ones.

MORERA: I have this vision in front of my eyes: a woman walking in a strong wind, climbing the narrow path up the mountains carrying a big basket with olives and bread.

VERSACE: We had this big old house on the Aspromonte, where my father’s family had a coal-mine. The environment was so strong, so dramatic. Tragedy is all over Calabria, it’s in the air. All this corresponds to my temperament. In those days, when I was a little kid, I met the truer more authentic people of my life. The men were so pure, strong, honest, and faithful unto death —with an incredible sense of respect for a boss.

MORERA: You will soon buy an apartment in New York?

VERSACE: Let’s see. I hate the traffic over there. Why don’t they start to build moving pathways to replace all the streets? I see New York in a very futuristic way, but they must do something new.

VERSACE: Oh, yes. My favorite characters were the robots. I did not like the style of the Princess and the costumes in general. The Princess had something on like an old Callaghan, my Greek collection, and there was too much Japan for the men.

MORERA: You have an incredible business, you make so much money!

VERSACE: Because I get royalties from the companies, and they do so well. I invest all my money in my studio—I bought the new offices. I’m developing so much every season.

MORERA: I know that you follow personally every step of the business, not only the collections, but the advertising and the photography.

VERSACE: I love photography and art-directing is something that I really would enjoy to do. I use photographers like Guy Bourdin and Gianpaolo Barbieri, but I like very much Newton too, and Avedon of course.

MORERA: Fashion is always a fascinating world especially for the people who don’t belong to it.

VERSACE: That is because fashion goes with the feeling of the moment. It’s related to movies, to art, to young people’s taste. Think about how much influence fashion has gotten from the film Casanova. It would be a pity not to take advantages of the publicity that movies spread around the world about a certain look.

MORERA: You are very close to women’s needs.

VERSACE: I ask my friends and I watch women continuously. I want them to look beautiful, I am not interested in making them funny, but just beautiful. They have got to look marvelous to please their own men.

MORERA: Can you say who are the designers of this period that you admire?

VERSACE: Issey Miyake is the most creative of the moment.

MORERA: And who else do you think is going to leave a mark in the history?

VERSACE: If we talk about revolution the only one is Courrèges. St. Laurent is Chanel, Kenzo—too much folk, Courrèges is Courrèges.

MORERA: When did you start to draw fashion?

VERSACE: At school. My teacher used to say that I was a sex maniac because I was always drawing Gina Lollabrigida with very sexy clothes. Always Lolla. In that period she was the biggest star.

MORERA: I remember all the girls imitating her hairstyle.

VERSACE: Fashion needs incredible women, alive, stimulating, with style like Diana Vreeland. She is the most. The way she talks expresses all her values.

MORERA: What do you buy a lot?

VERSACE: Books. Books of art, costumes, biographies and about the future. My only dream is to get old and finally have time to read all the books that I’m collecting.

MORERA: Do you have fun when you make love?

VERSACE: Of course. The first thing I really enjoy is to make love, after comes the music. And I love very much the night after every fashion show when I have all those invitations to parties and I stay quiet at home by myself.

THIS ARTICLE INITIALLY APPEARED IN THE 1977 NOVEMBER ISSUE OF INTERVIEW.