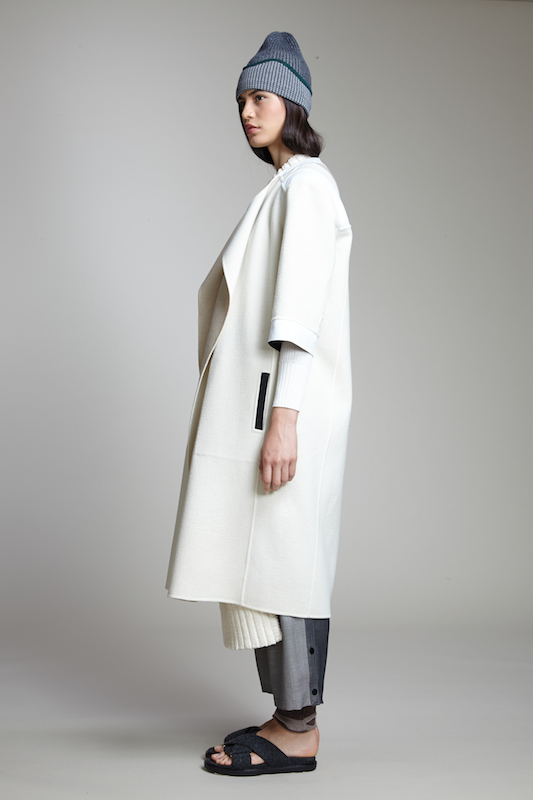 “My inspiration really came from the idea of the traveling woman and images of the world from above,” says designer Marcia Patmos of her latest work for her New York-based line, M. Patmos. “I think my girl likes to be comfortable, but it’s not really suburban comfort—she’s on the go, she’s running around,” she explains. “She likes neutrals, but she appreciates colorful detail in whatever she wears, even if she’s a lawyer. Not all of my customers are artists and gallery owners, after all.”

M. Patmos, however, is about more than just cozy cardigans and knitwear; trademark touches include men’s tailoring and structure in Oxford shirt-style dresses with barrel cuffs, close-cut cropped pants with suit detailing, and chunky sweater vests that give the illusion of shoulder pads. For Fall 2014, Patmos showcased several separates with unexpected twists: a wool coat with lapels comprised of silver feathers, a knee-length vest featuring an elaborate cream-colored shearling bodice, and a pair of flared, burgundy leather trousers were a few pieces that stood out. As a whole, the collection spoke to her ability to produce artful, stand-alone pieces using a wide range of fabrics, while still maintaining a cohesive collection. Her electric references included 1970’s Yves Saint Laurent volume, the feminist forms of early ready-to-wear dressmakers Claire McCardell and Bonnie Cashin, and the aesthetics of favorite cities Buenos Aires, Amsterdam, and Tokyo. “Inspiration is everywhere, in different forms,” Patmos tells us. “It’s important to take from every experience what you can. My fabrics and yarns come from all over the world, and I like to pick things up as I go.”

For the Woolmark project, Patmos created a character: “a fictional archaeologist who loses her luggage, and is left only with the clothes she’s wearing.” The archaeologist, Patmos narrates, “has five cities to go to in countries with very distinct climates, and she finds ways to make these pieces accommodate the differences of each environment. A shawl is used as a blanket; a woven floor-length dress also functions as a sweater. It was all about layering and versatility.” Going forth, Patmos will be working on her spring line, collaborations with Ryan McGinness and Kisan, as well as a capsule collection featuring her famous, high quality t-shirts and sweaters. “They’ll always be the core part of the brand,” she reassures.