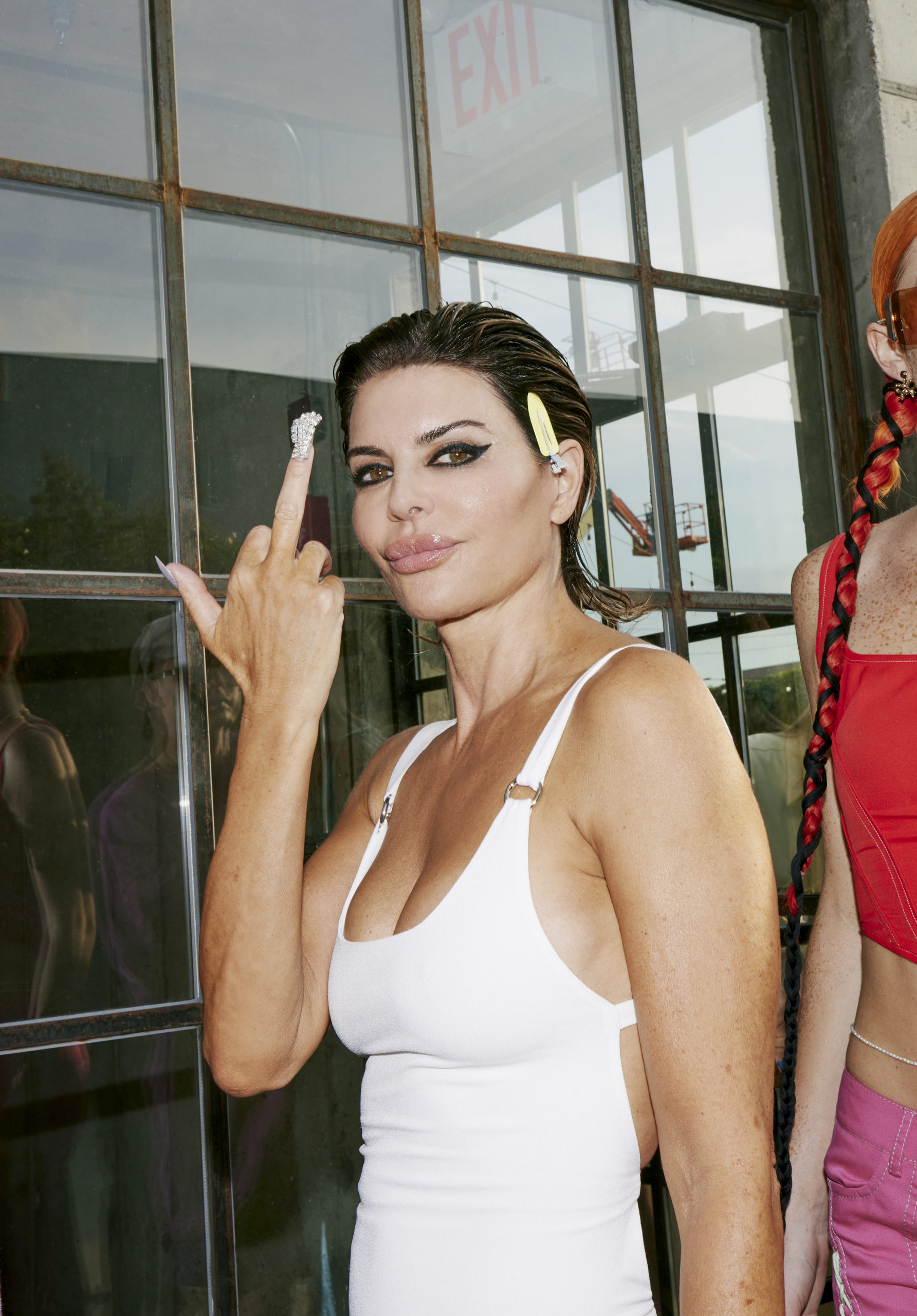 For Priscavera’s SS23 runway show, the Rome-Born designer Prisca Vera Franchetti brought her sultry looks to Brooklyn where a front row of hotties in slinky mesh and satin looks sat snacking popcorn and taking notes. Lisa Rinna, the actress and alleged villain of this season of The Real Housewives of Beverly Hills mesmerized the audience in a long white dress, while our girl Richie Shazam closed down the catwalk in a dreamy Y2K-inspired set. After the show, we had a tequila with Rinna and her charming husband Harry Hamlin, and caught up on internet drama, iconic models, and whether or not she pops edibles before her modeling gigs.

SCARABELLI: It was so fun.

RINNA: I had so much fun.

SCARABELLI: So for starters, how do you relax before getting on the runway?

RINNA: Well, I’ll tell you what, it’s not easy. But there’s so much waiting around that I stood against this wall for an hour, at least. And I stood between great models who gave me advice without me even having to beg for it. Luke, who was in front of me, who was a valet a year ago. His first show was Gucci in Hollywood—

RINNA: …and now he’s with IMG and walking everything.

SCARABELLI: And so you guys were practicing? SCARABELLI: But did you take an edible or no?

RINNA: No edible, but I wish I had one. We told some stories. I said that I’m going to act as if I had a shot of tequila, but I didn’t. I wish I would have, but I had to just go with it.

SCARABELLI: So did anybody inspire your walk? Are there any old school models you look up to?

SCARABELLI: Did you watch any videos to get in the mood?

RINNA: I just think that at this point, at my age, you just have to fucking do it and be yourself. This guy who works for Vogue, Mexico, came up to me and his wife’s a big fan. So he is like, “Will you say hi to my wife and everything.” I said, “Yes.” He helped me the most. Want to know why? Because he took a photo of me during rehearsal. He said, “Everything’s good but you need to relax your face. You look stressed.” So I was very conscious of my body. You’re holding your gut in, There’s all this stuff. He goes, “Relax your face.” So when I finally did it, I think it was very helpful.

SCARABELLI: Okay. So how would you describe your look that you wore tonight?

SCARABELLI: You said it.

RINNA: Okay. When she handed me that dress… SCARABELLI: You were like, “I know this. I know how to do this.”

RINNA: They took like a half an inch off the bottom, so I wouldn’t fall.

SCARABELLI: So you’re a fit model.

RINNA: But it’s also Italian fabric and when you put on Italian fabric, it just falls so nicely. And I have the white Gucci, Tom Ford, thing—

SCARABELLI: Yes. I’ve seen you in that.

RINNA: So it reminded me of that. And then they were very specific. I mean, I was in hair and makeup for a good two hours. They put on eyelashes and all this stuff and then they took it all off.

SCARABELLI: Wow. Well I love the cat eye. So where would you wear this collection? SCARABELLI: What about the midriff stuff?

SCARABELLI: So you think being the villain paid off because you are the only person on the show I’ve seen walking this fashion week?

RINNA: What do you think?

SCARABELLI: Are any of the rumors true? Will we be seeing you next season?

SCARABELLI: So what else are you looking forward to this fashion week?

RINNA: Well, I’m going to tell you one thing. We’re going to see A Strange Loop tomorrow. And I’m very excited about that because I hear it is absolutely iconic. I’m a very big Broadway lover. And then Michael Kors, I will sit Thursday and that’s it.

RINNA: And then we go home and my look for Michael Kors is iconic.

SCARABELLI: Okay, last question. What’s the best time to arrive at the after party?