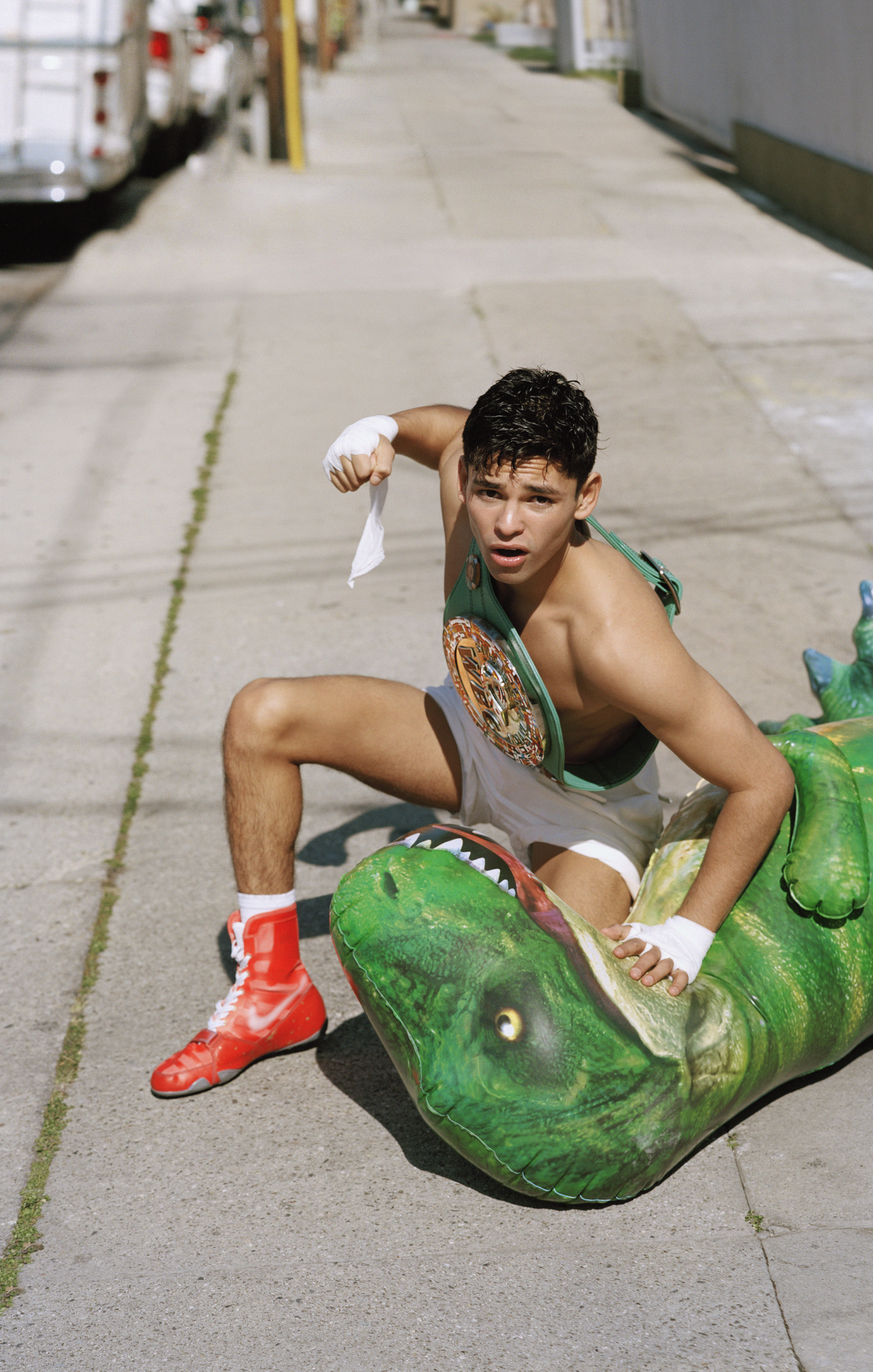 The last place you want to find yourself is against the ropes with Ryan Garcia. So far, 20 fighters have been in that dicey position and all they have to show for it is a public drubbing. In just four short years, the undefeated 21-year-old boxer has risen to the top of the sport’s lightweight division, where he currently holds its Silver Championship belt. When Garcia, a Southern California native who enters the ring waving both the American and Mexican flag, isn’t demoralizing opponents in the ring, he’s leveraging his unflappable confidence into a personal brand. With no signs of slowing down, Garcia did pause long enough to answer some questions from his promoter and mentor, the legendary pugilist Oscar De La Hoya.

RYAN GARCIA: What’s popping with you?

DE LA HOYA: All good, brother. You currently hold the [World Boxing Council] Silver lightweight title, but there’s a possible fight with Jorge Linares in July. He’s a four-time world champion. How do you feel about the fight?

GARCIA: I think this is a story of the old lion versus the young lion, and I’m coming to take the pride. I’m coming to literally fuck you up.

DE LA HOYA: Okay, okay. You’re still undefeated. How do you keep from getting too confident?

GARCIA: I just focus on the bigger picture. I’m trying to do something more than just be a champion who wins fights. I want to shock the world, and I’m going to do that through boxing. I’m shooting for the stars; I’m not shooting for this planet. Shorts by 2 Moncler 1952, Briefs (Worn Throughout) by Calvin Klein Underwear. DE LA HOYA: Where does your bravado come from? Do you feel like talking that type of game gives you the confidence to go out there and knock everybody out?

GARCIA: Boxing is dangerous. Anything can happen, so you need supreme confidence. That’s why I represent myself like nobody can beat me, because I need to truly believe it.

DE LA HOYA: You’ve been very vocal about your experiences with anxiety, the importance of checking in on yourself and your friends, and paying attention to your emotions. Do your struggles with mental health help you in the ring?

GARCIA: I can’t stress this enough: Mental health connects us all. We all go through stuff, and we’re all trying to figure it out in our own head. Once you do, you’ll have a better understanding of yourself. It’s important to talk about it and help erase that stigma.

DE LA HOYA: How do you work around it? If you’re having a bad day, does it make you work harder in the gym? Do you let it out when you’re sparring?

GARCIA: When I feel anxiety and depression and doubt, I think about why I’m doing this: “Why am I going through this? Why do I wake up every morning? Why am I sacrificing my body?” And for me, it’s about a larger purpose. I want to inspire and motivate the next generation of young people. DE LA HOYA: Who are your heroes?

GARCIA: I love what Manny Pacquiao has done, but it goes even further than boxing. I admire people who have fought for change: Martin Luther King Jr., Harriet Tubman, Abraham Lincoln. I’m dead serious when I say that—those are my heroes. I also like Ben Affleck. I actually love Zendaya, and want to meet her. I’ll just throw that out there.

DE LA HOYA: What’s your relationship like with your fans?

GARCIA: I try to be genuine with them. I try to share my thoughts and the things I’ve gone through. When I have time, I check my DMs.

DE LA HOYA: How did you get into boxing?

GARCIA: It started when I was 7. I was playing baseball and I was pretty good, but my team just wasn’t doing their job. It made me not like the team aspect of sports. I wanted a sport where it could be one-on-one. I asked my uncle, “Can I find a sport that’s just all on me?” He showed me a video of a sport called boxing. I was like, “All right, I’ll try it.” He took me to his garage and put a pair of gloves on me, and right when I did that first jab, I was pretty much just in love with the sound of the mitt. That snap. DE LA HOYA: Do you ever get starstruck?

GARCIA: I wouldn’t say starstruck, but I do get excited to meet people who have the same passion and the same goals as me, people who are trying to change the world. I couldn’t give a shit about somebody who’s not trying to do that, even if they’re a star.

DE LA HOYA: Do you see yourself as an ambassador of the sport?

GARCIA: I feel like I can be not only the face of boxing, but a true revolutionary to the sport.

DE LA HOYA: You carry both the U.S. and Mexico in your heart, and you represent them both in the ring. Why is that important to you?