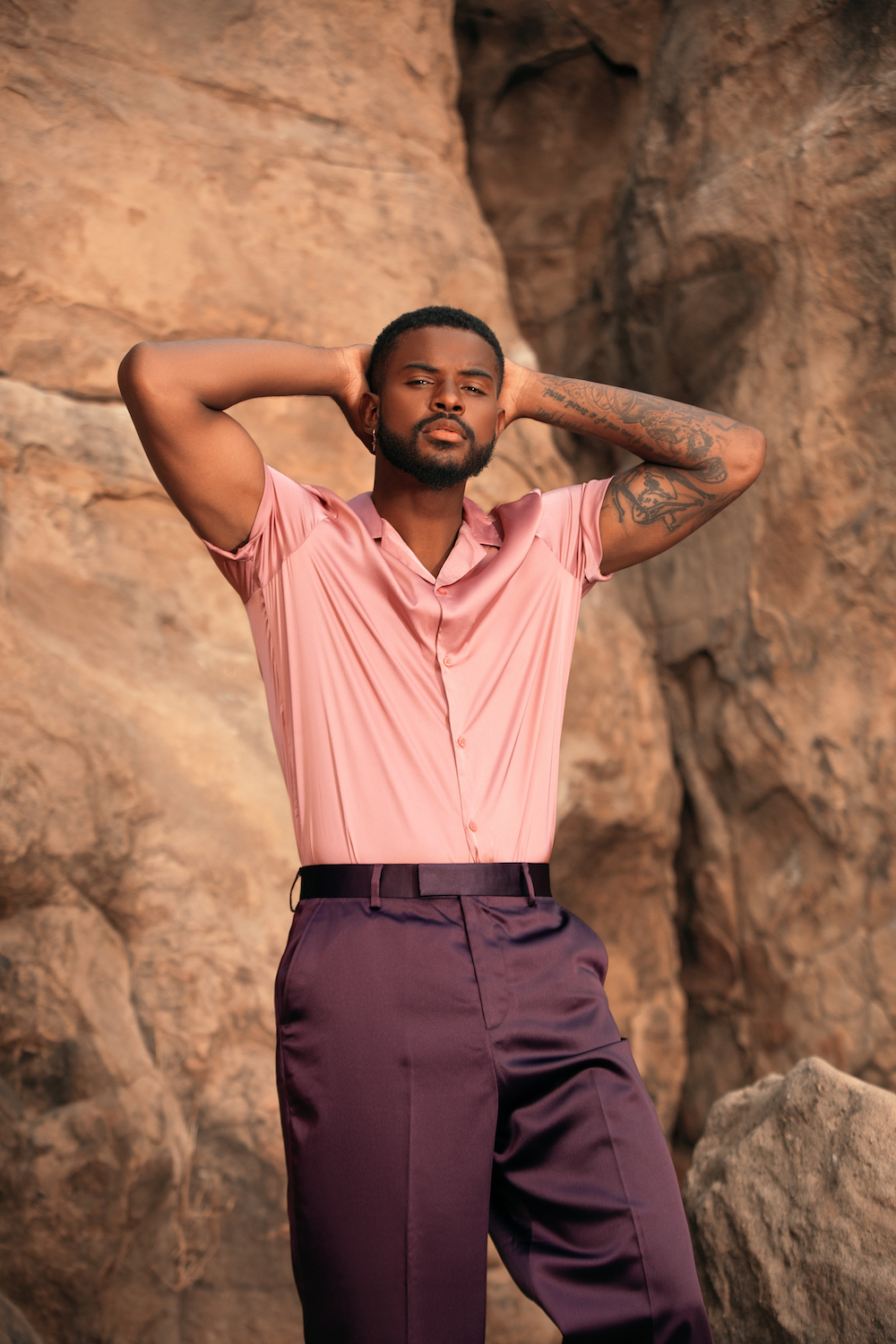 After a short hiatus, Grown-ish is officially back for season four. As a spinoff of ABC’s award-winning sitcom Black-ish, the comedy follows Zoey Johnson (Yara Shahidi) as she stumbles through college and into early adulthood. Season four positions Zoey opposite her fellow student Aaron Jackson, played by the actor and musician Trevor Jackson. After three seasons of an agonizing romantic will-they-won’t-they tug of war, season four finally sees sparks fly between the pair.

For Jackson, the new season offers an opportunity to develop and add complexity to his character: after graduating from college, Aaron evolves from a fiercely passionate undergraduate student into a newly-minted adult whose future suddenly feels uncertain. The Indianapolis-born 24-year-old actor, who got his start in productions as varied as The Lion King musical, Syfy’s Eureka, and Disney’s TV movie Let It Shine, has a summer of equally eclectic work ahead. In addition to preparing for Grown-ish’s July 8 premiere, Jackson also recently released his new R&B album The Love Language. Below, Jackson took a break from his busy schedule to discuss all things Grown-ish, the joys of making vulnerable music, and why he can’t wait to work on the other side of the camera.

JULIANA UKIOMOGBE: Let’s start with Grown-ish. Season four premieres on July 8. Where do we pick up from season three?

TREVOR JACKSON: Well, Season four is starting to take place during senior year. We’re basically following the crew during their last stretch before they’re fully grown. We’re talking about socially relevant stories like police brutality, racial justice, and single motherhood. Zoey and I are always in a weird spot. We’ll have to see how that unfolds. But everyone’s getting older. It’s a beautiful time.

UKIOMOGBE: Speaking of social issues, there’s a storyline this season that revolves around Black Lives Matter. Can you talk a bit about that?

JACKSON: First of all, I’m so thankful to be on a show that’s able to highlight things like that because we were getting information about police brutality while we were shooting the episode. It just made it really surreal, especially being a young Black man along with Diggy [Simmons], Luka [Sabbat], and other cast members. It was just really heavy on us. So whatever you could imagine, we’d be talking about that. It’s super powerful for a show like that to talk about it. And I felt very privileged to be able to spread the word and keep people aware of what’s really going on and not run from the problem, but face it head-on.

UKIOMOGBE: Do you think that there’s a duty as an artist to represent the world in your work?

JACKSON: I do believe that. I do also believe that sometimes people put a lot of pressure on themselves to do it for everyone else. Sometimes, a form of activism is making something that gets people’s minds completely off of it, that puts them in a better headspace so that when they do go back to the issue they’re dealing with, they’re dealing with it from a different perspective or have a better insight, you know? So I think that’s a wide spectrum, but I think if you create something with love and with good intention and it can uplift someone’s day, then that’s even a form of healing.

UKIOMOGBE: The season does start off a bit lighter. The whole friend group is in Mexico and we finally get to see Zoey and Aaron as a couple. How does their relationship progress as this season unfolds?

UKIOMOGBE: Have you seen your character Aaron mature over the seasons?

JACKSON: Absolutely. Doing what’s right for oneself is the highest and the biggest sign of maturity. I don’t think we get there until later in life. We’re often just people pleasers and want to do what we think we’re supposed to and not do what’s necessarily right for ourselves. I think Aaron starts to show that within the season, whether it’s with school or who he’s supposed to be. Just following your heart and making sure that you’re comfortable, morale-wise. UKIOMOGBE: Let’s transition to music for just a minute. Your album, The Love Language, was just released. How does it feel to finally have it out into the world?

JACKSON: It feels amazing. When anybody says it’s the best work you put out so far, that’s always what you want to hear. The fans are in love with it. And I feel like I made it in that time where there was a lot of love needed in the world. Social injustice with the pandemic. There was just so much going on. Negativity. I wanted to make a song about what I think the remedy is to a lot of things, which is love. So this album has a lot of my songwriting. I feel like it’s just elevated in a way. I mean, just being honest and a little more vulnerable with this album. I’m definitely pleased with how the fans have received it and the music video I absolutely love. My goal is to always outdo myself with the videos.

UKIOMOGBE: Do you have a favorite song off the project?

JACKSON: “Love Don’t Change” might be one of my favorites. I wrote that song about a relationship I was in. I wrote that song about god, I wrote that song about my family. It was just all of them. Typically how I write any song, I just do a melody, and words will come out, but it was just like, “Yeah, that’s something that everybody hopes for.” Everybody wants to feel loved.  That’s why, when people mess up, they’re afraid because they’re like, “Will I still be loved? Can someone still love me, even when I’m not 100%?” That song is just that kind of undeniable, unwavering love that we all need to survive.

UKIOMOGBE: Are you able to express yourself the same way between acting and music, or are they two completely separate worlds for you?

JACKSON: The amount of expression is the same, but the way it’s expressed is different. The great thing about acting is anything you’ve been holding in, you can let out on screen. But when it comes to music and stuff, everything is very personal and then I’m also vocal producing as well. So I edit it in the way I want it to sound, but when you’re acting, they have an editor, they have a director, they have a script. So it’s kind of coming from somewhere else. And I’m just putting my twist on things that are already there.

JACKSON: Hear a beat, come up with the melody, record the melody. And then as I’m recording the melody I’ll be like “Oh, there’s a line.” Add that line. The other stuff will be mumbled. We’ll throw that back. Let’s work to go there, put words, but it’s all just kind of like that. It’s melody and then words. And typically when I do melodies, it’ll end up being the word that’s closest to the melody. But I always try and get the feelings first. I’ve got to make sure that it just flows and that it feels right. And then after, so the lyrics come and then after all the lyrics come, then backgrounds. Ad libs and then, that’s pretty much it.

UKIOMOGBE: Are you thinking of the video aesthetic while you’re making the songs?

UKIOMOGBE: Would you ever want to direct videos for other artists or do you just primarily want to work by yourself?

JACKSON: For now, I want to work by myself, but when I direct other things, I think I want to do movies. Maybe short films, not necessarily music videos. I would love that.