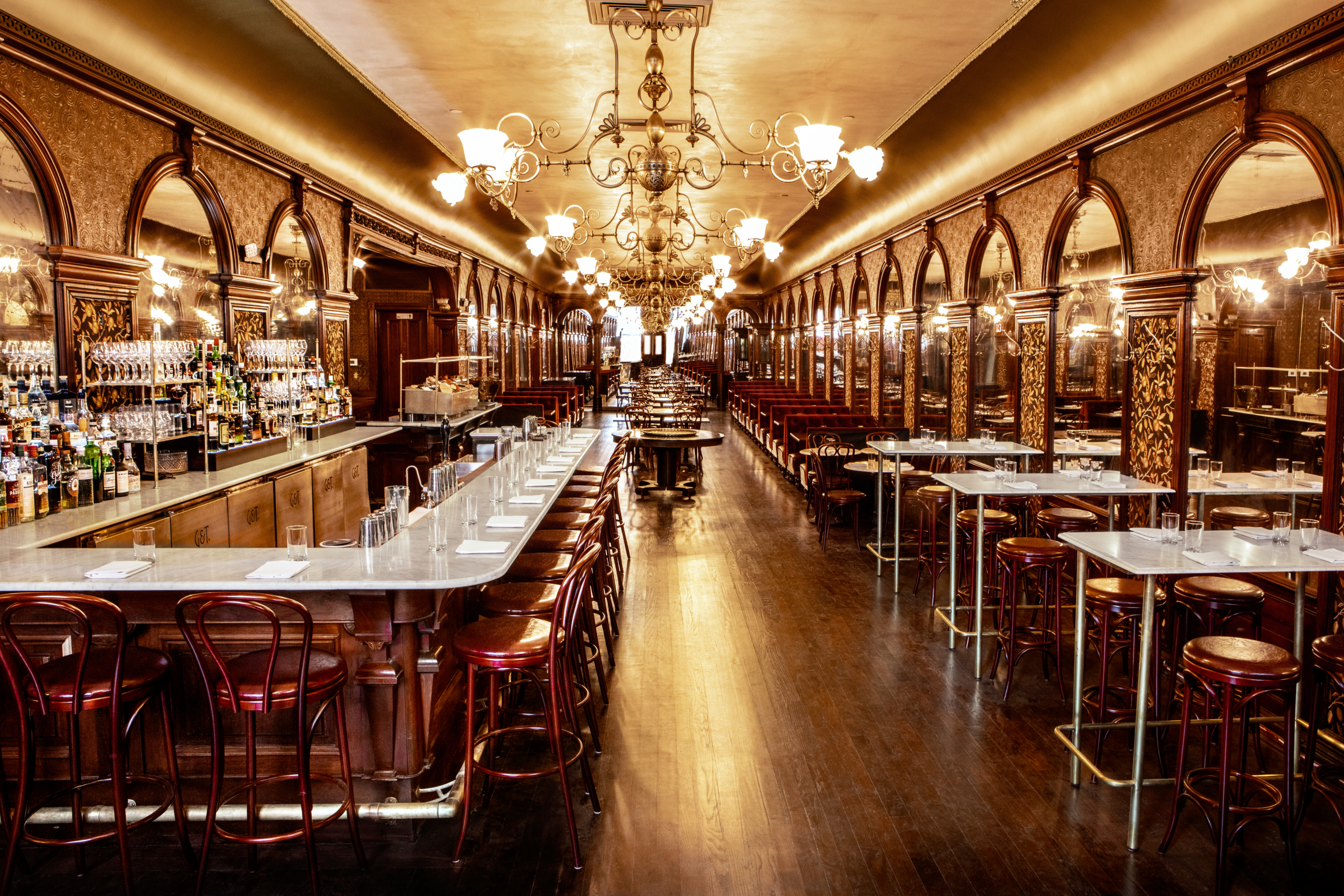 In the days and weeks leading up to the New York City shutdown, anticipation had been building for the opening of a new restaurant—not all that common in a town where restaurants are seemingly born every minute. Gage & Tollner, a legendary oyster and chop house known for its old-world aura and for drawing celebrities like Mae West and Truman Capote, was set to reopen on March 15 in Downtown Brooklyn, where it has stood since 1892. In the years since it closed in 2004, the space has housed a TGI Fridays, an Arby’s, and a discount clothing store, but after a successful online fundraising campaign, restaurateurs St. John Frizell, Sohui Kim, and Kim’s husband Ben Schneider managed to revive the former glory that made it only the third place to achieve interior landmark designation in New York City. But that was then. As Schneider tell us below, the pandemic finds Gage & Tollner at a crossroads.

“Gage & Tollner was in operation for 125 years. It survived the Spanish flu and prohibition and two world wars and the Depression. So as we look backwards, I think that gives us encouragement looking forward.

As a budding restaurateur with The Good Fork, which is our little place in Red Hook that we opened 14 years ago, I somehow learned about Gage & Tollner, which had been closed since 2004. I became instantly obsessed with the idea of it. I entered the restaurant business partly due to a romanticism about restaurants and how special they are as places that can transport you somewhere else. I discovered in my research that one of the owners along the way, Peter Aschkenasy, was an early supporter of The Good Fork, so I called him up and I said, “What’s going on with Gage & Tollner?” This was over a decade ago. He talked me off the ledge at the time and said, “It’s complicated and difficult and not really available.” So I kind of let it go. And then, fast-forward 10 years, and St. John and I are downtown looking at spaces for a potential cocktail bar, and the broker said, “There’s another space you might want to look at on Fulton Street.” So we walk over there, and it was Gage & Tollner. We were both blown away that it was not only there, but it was kind of cleared out. Even though it needed a lot of work, you could really see the space. You could see the mirrors and the woodwork and the lamps, and that’s what started this journey.

Before we were set to open, we had three investor parties. Then we had four nights of friends-and-family dinners for us to work out the kinks before the grand opening. Except we canceled the last one, because that’s when the landscape became clear. We were a few days ahead of the government, but we thought closing was the right thing to do because it was pretty clear what was happening. We talked about it being a few weeks, but deep down we knew there was the possibility that this would go on much longer. But what we said to each other out loud was, “Hey, this is going to be a few weeks, and then we’ll just pick right back up where we left it.” It’s become increasingly clear that that’s not exactly how this is going to go.

The challenges with my other restaurants are really about finances, but Gage is a different challenge. With Gage, it’s about trying to create a stable environment to wait, and whether we wait until we’re able to open in some limited capacity with spacing, some modifications to the ventilation system, and masks and all the other protocols, or whether we try to wait until we can open like we were about to open. That’s the big question, and we’re kind of preparing for both. Gage has the advantage of having two floors. We’re still working on the upstairs, but once it’s finished, then we can do distance-seating up there, and it’ll be the only time that you’re ever going to be able to eat at Gage & Tollner with a fine-dining distance between you and the other diners. It’ll be quieter and more peaceful, and, in a way, more elegant. So it would be different than what it was supposed to be, but it won’t necessarily be bad, and it could be quite special in a certain way. It doesn’t mean you can’t have friendly, elegant service, it doesn’t mean you can’t have incredibly delicious food, and it doesn’t mean you won’t enjoy being in that room. I was in that room today, and it’s incredible.

Rent is the biggest expense at the moment, but our landlords have been helpful, and they really want this thing to succeed long term. Trying to get our momentum back is going to be interesting, and perhaps challenging, because we had all this incredible press. We don’t need it all again, but we’re going to need some of it to get the word out. And then trying to make a right decision about whether it’s good, long-term, for the restaurant to open in a strange way, or better for the restaurant to wait. And if we wait, then we’re even further away from that momentum we had, so maybe it’s better to let people in to experience the space, and to start slowly building our customer base.

As for how I’m doing with all of this, I try to move forward and not get bogged down. I had to rethink my plans of blowing lines in my Bentley. That’s not going to be happening as quickly as I thought it might. But money isn’t everything, and it’s hopefully money deferred. The main thing for us is to figure out a way to get back, at some point, to that moment we were at, where we were about to open with 2,000 reservations on the books for the first 25 days. I feel confident that we can get there.” —AS TOLD TO BEN BARNA