By Bob Colacello and Andy Warhol 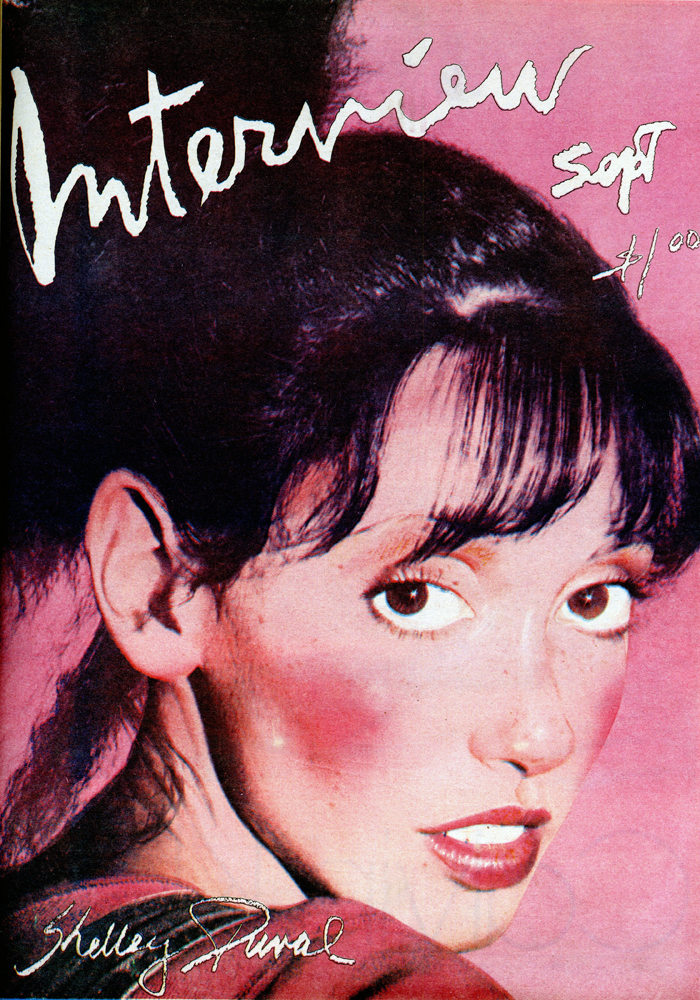 This story is part of a collection celebrating the best—and wildest—Warhol conversations from the Interview archives.

Set to begin filming The Shining with Jack Nicholson within the following months of her September 1977 interview, Shelley Duvall was poised to begin the peak of her career with her roles in Robert Altman’s Three Women and Kubrick’s horror opus. In the wake of the arrest of infamous serial killer “Son of Sam,” Duvall spoke with Andy Warhol and Bob Colacello at the restaurant Quo Vadis, where she wore a bright pink cotton dress that flared out below the hips, bright green linen boots, and a bright pink and green silk shawl. In her slow and soft voice, she tells the pair about about being discovered on location as an actress, and her ironic fear of horror movies

ANDY WARHOL: This is a whole new table. I’ve never sat on this side before. Are you staying out in East Hampton most of the time?

SHELLEY DUVALL: Yes, for most of the summer. I come back about two days a week usually.

WARHOL: Son of Sam was on his way out there.

WARHOL: How could a Berkowitz kill a Moskowitz?

WARHOL: Where did you learn French?

DUVALL: Not from my father.

WARHOL: Duvall is a French name.

WARHOL: Where were you born?

DUVALL: I was born in Fort Worth but I never lived there. I was visiting my grandmother at the time.

DUVALL: My mother was visiting my grandmother when I was born. But I grew up in Houston. I lived there until ’73 and then I moved to Los Angeles.

WARHOL: When did we meet?

DUVALL: You met me in 1970 when I’d just finished Brewster McCloud and was about to do McCabe & Mrs. Miller. Bill Worth told me, “Come down to the Factory and meet Andy Warhol,” and we got there and you weren’t there but we looked at pictures. And I remember the time you told me, “I stayed home from Elaine’s birthday party to watch you on Dick Cavett.” I was so flattered!

COLACELLO: You’re such a charmer, Andy.

WARHOL: But it was true.

DUVALL: It’s from a novel written by Stephen King, who wrote Carrie. It’s called The Shining and we start shooting somewhere between December 1 and February 1. Stanley Kubrick’s writing the script now. He’s directing and it’ll be shot in London and Switzerland for 15 to 25 weeks—a long shoot.

COLACELLO: Is it a big cast?

DUVALL: No, it’s Jack and myself and a five-year-old boy, basically. And there’s a psychiatrist and an ex-gardener at the place where we’re caretakers. It’s very frightening. When I first heard of it I was wondering why Stanley Kubrick would want to do this film and then I read the book and it turns out, I think, to be really primal about fears and about the fears that one has in a relationship with another person.

WARHOL: It sounds like it could be a Robert Altman film, too. Three Women was terrific.

DUVALL: Bob knows me very well and he knows my limitations.

WARHOL: That story was fascinating.

DUVALL: I loved that story. That was an actual dream that Bob had. He had the dream on a Saturday night and he called me up on Sunday morning and said, “Shelley. I just had this incredible dream. Part of the dream was that I woke up and told my wife and wrote it all down on a yellow legal pad and called my production assistant and said, ‘I want you to scout locations for me,'” and then he woke up and discovered he hadn’t told his wife and he hadn’t written it down. It’s amazing—within a week he had the money for the film and we started shooting a month later.

WARHOL: Janice Rule is one of my favorite actresses but her style of acting was so different from yours and Sissy Spacek‘s.

DUVALL: I was just going to tell you it was actually just two women in the dream—Sissy and I. But I think someone like Bergman or Antonioni had already done a film called Two Women.

WARHOL: No, it was Sophia Loren. That was the one where she came out of the ocean. She won an Academy Award for it.

COLACELLO: Did you ever think you wanted to be an actress?

COLACELLO: How did you get started?

DUVALL: It’s a long story but I’ll tell you. I was living with my artist boyfriend at his parents’ house in Houston and we had a lot of parties and people would come who we didn’t know and his parents’ friends would come—they were really good parents—and one day I was giving a party and these three gentlemen came in and I said, “Come in, fix yourself a drink, make yourself at home,” and I continued showing all my friends Bernard’s new paintings, telling them what the artist was thinking. And they said they had some friends who were patrons of the arts who’d like to see the paintings so I made an appointment, brought the paintings up and showed them one by one. I lugged 35 paintings up there. And instead of selling some paintings I wound up getting into a movie.

WARHOL: They were testing you out?

WARHOL: What did you do?

DUVALL: The guy left me with the bill for the Coca-Cola. So this time I said, “No, thank you,” and they called my parents’ house and got hold of me and after a while we became such good friends that I had no fear. I said, “I’m not an actress.” They said, “Yes, you are.” Finally, I said, “All right, if you think I’m an actress I guess I am.”

WARHOL: But what were they doing there?

DUVALL: They were on location.

WARHOL: But what made them come to the house? Were they just looking for something to do?

DUVALL: Somebody at the party had called them up and told them if they were bored in Houston we gave a lot of parties. When the film was over I thought it was just an interlude in my life. But three months later I started work on McCabe & Mrs. Miller. Actually during Brewster McCloud I’d already signed a five-year contract.

WARHOL: I guess things really do happen at parties.

COLACELLO: But you never studied acting?

DUVALL: I went to Lee Strasberg a few years ago because I’d heard such good things about him but I went to two lessons and it just wasn’t for me. That’s one piece of advice Robert Altman gave me at the very beginning—never take lessons and don’t take yourself seriously.

WARHOL: He’s right. It’s all magic. The problem is knowing how to keep it once you get it.

DUVALL: I make my own decisions. And I never turn down anything without reading it. Other than that… I’m sort of at a loss for words. It was hard to move here, actually.

DUVALL: I moved here in October.

DUVALL: No, to New York from L.A. East Hampton’s just a summer place.

DUVALL: I like that idea. I think it would be just as nice in the spring and fall as in the summer. Our place looks like Japan. It’s got those short needlepines, little pebbles and everything.

WARHOL: Montauk doesn’t have much of a beach but it’s very beautiful. It’s all rocks.

DUVALL: I want to see the lighthouse.

WARHOL: If you’d seen Peter Beard’s place you’d be so sad now. It just burned down last week with all his work inside.

DUVALL: How terrible. Was it lightning?

WARHOL: No, the boiler room.

DUVALL: God, the boiler room! You should read The Shining.

WARHOL: Does it happen in a boiler room?

WARHOL: Carrie was so good.

DUVALL: I like to see just about every movie that comes out that strikes my fancy.

WARHOL: I’m always worrying about bombs in movie theaters, though. My favorite kind of movies are unsuccessful ones because there’s no one there. And then I like…

COLACELLO: Why did you move to New York from L.A.?

DUVALL: For several reasons. I’d always wanted to move to New York, from the first time I came here. And then I guess Paul [Simon] was an extra added attraction—a New Yorker boyfriend.

COLACELLO: That’s a nice way of putting it. He’s working so much now.

DUVALL: He’s always working. There’s so much energy here. That’s why I like it, despite everything.

WARHOL: How can people see something on TV and then they can’t wait to read about it in the newspaper? Why is that?

WARHOL: It’s easy if you have a pushbutton. It’s great. And if you turn it on at seven you see the news three or four times which is even better—all the repeats.

DUVALL: I did an interview with Gene Shalit and I never saw it because I could never wake up early enough.

DUVALL: I’m looking over at the chocolate mousse but…

WARHOL: I was supposed to go to the pimple doctor this morning and I never went.

DUVALL: Well, everybody’s got something about them. But did you hear about the guy with no feet?

DUVALL: We really are.

WARHOL: So many people have so many problems. When you think that health is wealth, you’re so grateful just to be normal, more or less. Aren’t you?

THIS INTERVIEW ORIGINALLY APPEARED IN THE SEPTEMBER 1977 ISSUE OF INTERVIEW.