Meet Ben Ditto, The Guy Meme-ing His Way Through War Meet Ben Ditto—renaissance man of the internet age. The creative director and journalist has dabbled in everything from crypto to porn, collaborated with brands like Maison Margiela and Louis Vuitton on ambitious campaigns, and helped launch Dazed Beauty alongside Isamaya Ffrench. But on Instagram, he’s @ben_ditto2.0, a purveyor of nihilistic memes and breaking news. When the latest Russian invasion began in Ukraine last month, Ditto turned his focus toward coverage of the crisis, transforming his account into a compendium of grassroots conflict reporting, Russian propaganda clips, and deadpan memes that highlight the absurdism of internet activism in the midst of a reality-warping tragedy. The descendent of Ukrainian and Belorussian refugees who fled their homes during World War ll, Ditto, who was raised in London, has built his own relationship with the region through his work in nightlife and music. “There is a spirit to youth culture in the music scene there that I absolutely adore,” he says, “Watching it get smashed to pieces is horrifying.”  To learn more about his approach to covering the conflict for his 44K followers, we asked Ditto a few questions via DM.

INTERVIEW: What is the first thing you do when you wake up?

@BEN_DITTO2.0: My account used to just be a load of dumb domestic shit, and years ago my assistant said, “Why don’t you delete all of that nonsense and just post one thing a day that you really like?” Fast forward a few years: here we are.

INTERVIEW: Why is Instagram the best platform for what you do?

@BEN_DITTO2.0: Well, I’ve been working as a journalist and publishing magazines for a long time. It all kind of merges into one practice on my IG account. Basically anything that comes to mind I post, I don’t really think about it for very long at all. It’s almost stream of consciousness. Honestly, Instagram is perfect for me—it’s an all-in-one publishing platform. It’s easy to be cynical about it, but it’s also amazing for my purposes.

@BEN_DITTO2.0: Haha there’s some nsfw in there. Last three were “strike through,” “tibial nail removal film,” and “Ukraine Egypt wheat.”

INTERVIEW: What do you bring to the internet?

@BEN_DITTO2.0: Hmm. On the one hand, “Well-intentioned, informed, and witty cultural commentary.” On the other hand, “My soul, to be subsumed into the cybernetic hive mind.”

@BEN_DITTO2.0: I haven’t been in a YouTube rabbit hole for years. Last time was probably those How It’s Made videos. I love that. Like windshield wipers, buttons, and aircraft carriers.

INTERVIEW: What do you think of social media activism?

@BEN_DITTO2.0: I think it’s easy to be cynical about this stuff. Some social media activism is purely tokenistic, some of it is straight-up actively unhelpful. But as an instrument for raising awareness and building networks, it can be unparalleled. I don’t  think there’s an easy answer to that question. Baudrillard was right, though.

INTERVIEW: Do you think of memes as a coping mechanism?

@BEN_DITTO2.0: The “cope” strata of the internet is one that I don’t really understand. Maybe it’s an American thing…I see it so often in the comment sections. Never really enters my consciousness when I create and consume memes. Feels a bit like the indie sadboi level of online culture. I’m predominantly here for the lulz

INTERVIEW: lol. What’s your process for selecting the articles that you share?

@BEN_DITTO2.0: I get sent a ton. I’ll scan them, and I’m quite good at detecting bias and doing background research pretty rapidly. Then I’ll post with a caveat, if I think it’s useful. I try to maintain a constant tone of awareness that not everything I post exactly reflects my beliefs. That way, you don’t have to explain yourself every fucking five seconds. Most of my audience are smart and get it.

INTERVIEW: How do you filter out disinformation?

@BEN_DITTO2.0: Well to be honest, I think in this day and age it’s impossible to filter out all disinformation. It has affected literally every news outlet at some point. But I try my best to present what I’m talking about as information or strands of content that form PART of a narrative, rather than FACTS. Like, obsessive fact checkers can be annoying, and sometimes miss the point of what reality actually looks like, if you catch my drift.

INTERVIEW: You have a funny way of dealing with callouts in the comments. What’s your approach to haters?

@BEN_DITTO2.0: I’ve never really heard anyone acknowledge that, so I don’t know if I am good at it or not. I don’t even think I’ve got very thick skin, I’m just happy with myself as a person so it doesn’t bother me very much at the end of the day. But firstly, I would say that 99% of people are nice. Even people I really disagree with can be nice—I’ve been talking to a Russian imperialist—hardcore—and they still send me pictures of their cats now and then. So, it’s important to remember that all of us are human. If somebody is a real prick, I will post their messages if I think they’re funny or useful, but I try not to be vindictive. In general, I think making things not feel personal is helpful. Like, when people are being horrible to me, they aren’t REALLY being horrible to me. If they knew me in real life, they’d probably like me (because I’m nice). I’m quite good at being sassy tho. 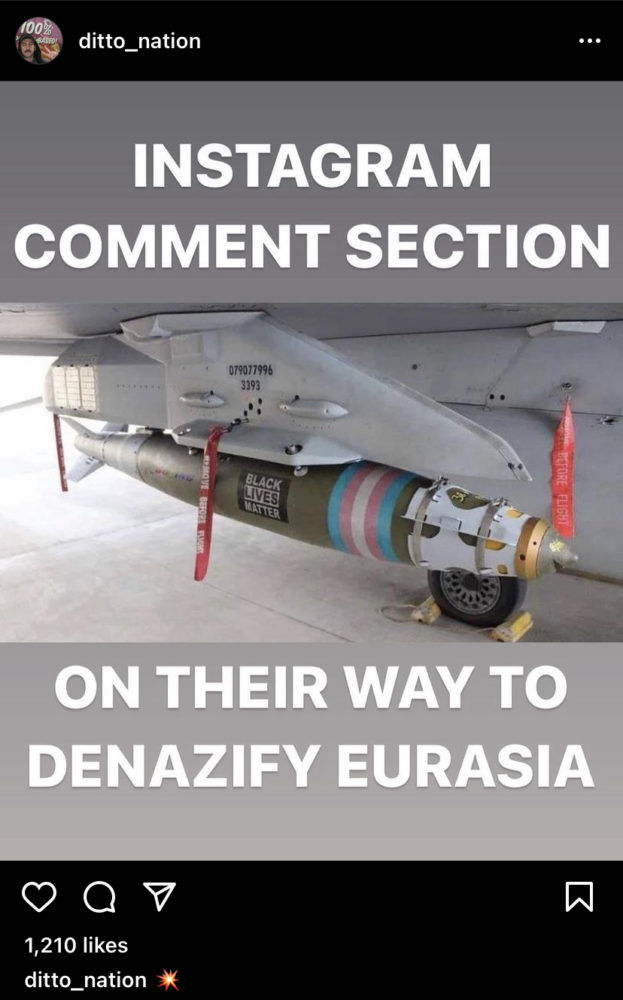 INTERVIEW: Is there an interaction you had recently with a troll that was interesting to you?

@BEN_DITTO2.0: I posted an image once of a woman holding a banner at a protest against sexual violence. She held a banner saying “Teach your son not to rape, or we will teach our daughters to kill.” I thought it was a very cool image, and it went very viral. I’ve never gotten so many abusive messages from young men who took it personally. To be honest, I know what it’s like to feel personally attacked as a young man and not understand the broader context. So that was illuminating.

INTERVIEW: How did you come to focus on the crisis in Ukraine?

@BEN_DITTO2.0: A few reasons. My father’s family came from Ukraine and Belarus under similar circumstances before he was born, and I grew up with those stories. His family was from Kyiv and Minsk. So, I’m fully aware of the shitty time refugees have. My grandfather’s cousins were brothers and surgeons from near Lviv, and were machine-gunned to death by the invading Germans while they were doing surgery (they stormed a hospital). It was featured in a newspaper at the time. Same shit, different decade. I travel there a lot and work with people, especially Julie Poly, and the more I go there, the more I fall in love with and really understand the difference between Russia and Ukraine, and what that country means to the people who live there. There is a spirit to youth culture in the music scene there that I absolutely adore. Watching it be smashed to pieces is horrifying. INTERVIEW: That is heartbreaking.

@BEN_DITTO2.0: I’ve also been following the narrative that Russia has been building for quite some time, out of personal interest and because of the consultancy work I do. It’s been like watching a slow motion car crash.

INTERVIEW: To what extent is posting potentially triggering material online valuable when it comes to getting your message across?

@BEN_DITTO2.0: It’s probably obvious to people who follow me, but I’m interested in sharing things that I think are beautiful, fascinating, or funny. I do think that fascination can be morbid, and that humor/satire is extremely powerful. I’m not afraid to be honest about the fact that I like transgressive imagery, sexuality and extremes of all types. But I take it for granted that I’m preaching to the converted—meaning, people wouldn’t follow me if they didn’t want to be seeing that stuff. Especially what I put on my Telegram. I’m not that interested in “triggering normies” or whatever, I find that pretty tedious. It’s more that I think you can access some interesting truths or emotions by using those tools, and the people who sign up for my content want to be provoked in that way.

INTERVIEW: What is the strangest DM you’ve received?

@BEN_DITTO2.0: Boy, I don’t even know where to start. People send me the weirdest shit all day. Somebody made a model of me out of their period blood and hair once.

INTERVIEW: What is your stalking platform of choice?

@BEN_DITTO2.0: One second. I’m sitting by the canal with a strawberry milkshake and I’ve just been moved on by a security guard.

@BEN_DITTO2.0: Now I’m good. There’s not enough time in the day for stalking. It’s shocking how little attention I pay to anybody else—I don’t have the energy. But stalk me by all means. I’m not hard to find.