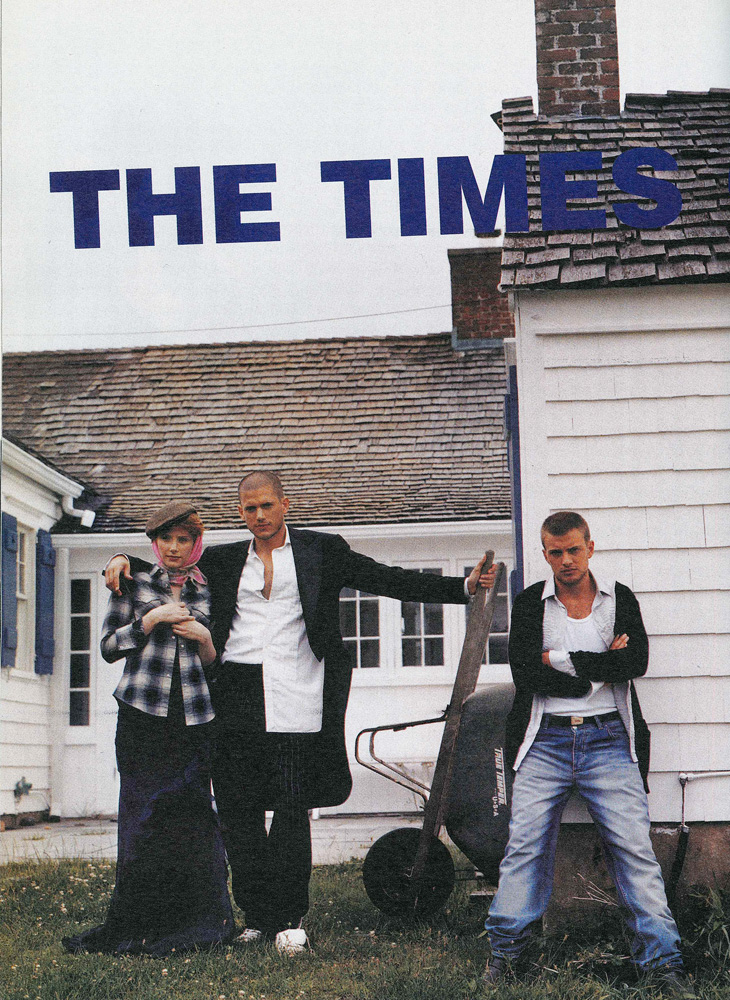 Nearly eight years have passed since Wentworth Miller’s journey as Michael Scofield on Fox’s Prison Break came to its electrifying end, but next week, Scofield will be back behind bars and back on TV. The buzz about the limited nine-episode revival has been mounting for months: producers of the show have shared their sides of the story, trailers have been released, and Miller is back in the spotlight. In honor of his resurrection as Scofield, we’ve reprinted his interview from our February 2005 issue. In a triple feature alongside Bryce Dallas Howard­ and Andreas Wilson, Miller talks about his first feature film and hints at a pilot directed by Brett Ratner that he’d just booked with Fox—what we now know as Prison Break. Season Five of the show premieres on Tuesday, April 4. —Katrina Alonso

The Time of Their Lives: Wentworth Miller
By Rebecca Walker

Some actors find their muse in old movies, others in games of make-believe. But for Wentworth Miller, the seeds of his dramatic talent were sown on the streets of Brooklyn, in a childhood that straddled a variety of worlds.

Of course I had to see The Human Stain. Anthony Hopkins as Coleman Silk, a black professor passing as white? Director Robert Benton’s audacity lured me to the theater the way bait lures a fish. Once inside, however, it was Wentworth Miller, the brooding and decidedly handsome young actor playing the young Silk, who kept me glued to my seat. Recently Miller and I sat down to chat. Even though he had just gotten the news that he’d booked a pilot, he was calm and collected. I wasn’t surprised. I think he’s just that kind of guy.

REBECCA WALKER: Like me, you’re biracial. As you were growing up, how were you led to understand your racial identity?

WENTWORTH MILLER: To be honest, it wasn’t something l took a very close look at until I got to college, which I think is what college is all about: self-examination and dealing with those questions of “Who am I?”

WALKER: Did that throw you into any anxiety?

MILLER: If it did, it came from the fact that other people were trying to define me and my own journey. There’s a quote I often refer to from Toni Morrison’s Beloved, which is that “definitions belong to the definers and not the defined.” The beautiful thing about having grown up in Brooklyn is, because of the rich cultural and racial diversity there, no one seemed to give too much thought to where I fit on the racial spectrum. But there were times when I would run up against someone who was interested in figuring out what race was. That would come as a surprise, and in some cases, like a slap in the face.

WALKER: Have you found being of mixed race helpful in your work?

MILLER: Well, the backstory to anyone of mixed race is a lifetime spent being incorrectly perceived and choosing either to allow that misperception to continue or to correct it, so I am aware of identity and race as being much more fluid, I think, than someone who is “purely” one thing or the other. And acting does challenge me to address those particular issues.

WALKER: Your first major film, The Human Stain, dealt with race and identity, so I know it’s something you’ve spoken about at length. Is it a subject you’re sick of talking about?

MILLER: I was when the movie came out. Part of me thought, “I don’t want to be forever linked with this issue as an actor.” But at the same time I thought the movie spoke to such important and often unaddressed issues that it was necessary to talk about it. I’m very proud of The Human Stain, but it was not a critical or commercial success; I think part of that was because it touched on some incredibly complicated and challenging themes. Aside from race it asked, “What lies are you telling to get through the day? What masks are you wearing to reap certain rewards?” Those can be unsettling questions to wrestle with.

WALKER: When did you start acting?

MILLER: When I was a kid. I would get involved in any stage production my parents would let me participate in. I did that up until college, which is when I took a detour. At Princeton all my friends were heading to Wall Street or med school or law school; acting didn’t seem like something to take seriously post-graduation. So I back-burnered that ambition, got my degree in English literature, and discovered I had no desire to go to grad school or law school or med school or Wall Street. I still loved film and TV, though, so I decided to make a career behind the camera; I actually worked on that side of the industry for years. I don’t regret that path at all because to make it in this business you have to have the soul of an artist and the pulse of a bureaucrat.

WALKER: How are things going professionally?

MILLER: Thank you. It’s going to be on Fox, and Brett Ratner is set to direct it. I’m tremendously excited about it. I’d been told The Human Stain was going to put me on the map as an actor, and the movie did open a number of doors for me; but when I walked through those doors I suddenly found myself in competition with guys who’d been on the covers of magazines. It’s very much a name game in Hollywood, and the current trend is to stock your movie with celebrities from the leads on down to Pizza Boy No. 5. It can be an incredibly frustrating experience. But at the end of the day you have to do it for yourself.

WALKER: How did you figure that out?

MILLER: Well, I’ve heard “no” once or twice. Only recently I’ve come to realize that one of the traps of auditioning is walking into that room feeling as though you’re a guest in someone’s house, and being really careful not to spill wine on the carpet. What you have to do is walk in there as though you’re the host.

WALKER: I have such empathy for people whose life’s ambition involves having to go through that on a regular basis.

MILLER: You have to love what you do, and you have to need it like you need air. And there’s nothing else that would give me the same degree of satisfaction as acting, which is why I can’t walk away from it.

THIS INTERVIEW ORIGINALLY APPEARED IN THE FEBRUARY 2005 ISSUE OF INTERVIEW.