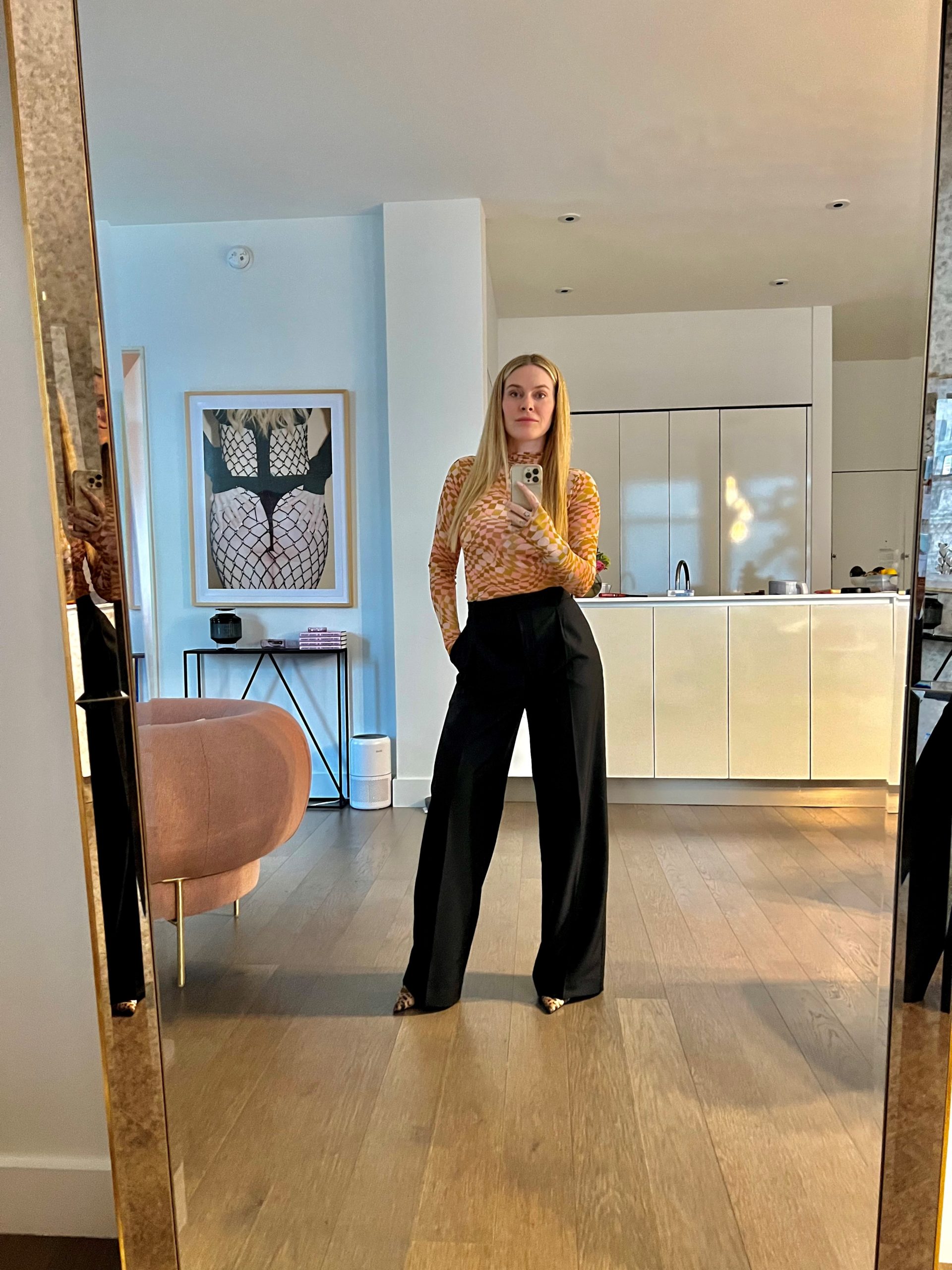 From party girl, to mom, to streetwear designer, the Real Housewives of New York star Leah McSweeney has done it all, and now, she’s documented it in a new memoir-slash-self-help book aptly titled Chaos Theory. The story follows McSweeney from her posh childhood in Chelsea to her tumultuous teenage years and rise as a downtown “it” girl with a popular clothing line. Using “chaos theory,” the mathematical idea that there are underlying patterns to seemingly chaotic systems, McSweeney makes meaning out of messes, and accepts some of the more complex sides of her character. From addiction and healing to girl-bossing and motherhood, she learns that perseverance comes from within, and hopes that by sharing her story, readers can too. To hear more about her writing process, McSweeney’s friend and fellow party girl-turned memoirist Cat Marnell got on Zoom to discuss dysfunctional relationships, post-9/11 nightlife, and the highs and lows of living life as a celebrity.

MCSWEENEY: Thanks so much for doing this.

MARNELL: I can’t believe my blurb sucked so bad in the book. Usually when I give a blurb I babble and babble but they only want seven words so I started doing it robot-style.

MCSWEENEY: I love your blurb!

MARNELL: I knew I was in a depression from burnout, but I didn’t know how bad it was. Like, if Leah asks me to do something, I fucking do it. So that’s when I knew I was not doing well, not coming through for you. There are certain people, my real people, that I’ll do anything for.

MCSWEENEY: Are you feeling better now?

MCSWEENEY: This is the perfect, chaotic way to start this.

MARNELL: Are you ready?

MCSWEENEY: Let’s do it. MARNELL: Since this is Interview and it’s Warholian, what is your favorite Warhol work?

MCSWEENEY: I love the portraits. Liza Minelli comes to mind. I have the Andy Warhol Diaries, it’s a huge freaking book, so sometimes when I need to get out of my head I open it and start reading, it’s just amazing. He always talks about where he took a taxi from and how much it had cost, he’s like, “Took it from downtown to fucking 88th street and it was five dollars.”

MARNELL: He kept it as a fiscal diary as well, for tax purposes. But I love it because he would just walk from his place in the Upper East Side down to Union Square and hand out the magazine. They talk about how they’d order from the health food restaurant Brownies downtown. I love the mundane. Speaking of mundane, how was the process of writing this book?

MCSWEENEY: [Laughs] It was really emotionally draining, and at one point I was like, “Oh my god why am I telling everybody this?!” It was cathartic but I also felt gutted, because I had to relive a lot of shit that I don’t think about daily.

MARNELL: I had a similar experience when I was writing my book. When I would get to the childhood parts I would go to bed and feel so heavy from the weight and pressure of doing that. But I think what’s really awesome is that now that you’ve written all of this, you’re gonna let it go because you get so sick of it.

MCSWEENEY: Yeah, I have let a lot of it go—by writing the book and a lot of therapy.

MCSWEENEY: It’s so funny you’re saying all of this, because I’ve been thinking—and was actually talking about it with my healer this morning—that I don’t have friends who have healthy relationships with their parents. All of my friends had dysfunctional upbringings, those are the people I gravitate towards. I think me and you have that in common.

MARNELL: For sure. That dynamic carries you through your whole life. It dictates your relationships, it dictates your relationship with yourself, and how you perceive the world. Now I’m complaining about my own memoir, but everyone’s always like, “I related to this.” It’s about the actual words on the page that I organized and worked so hard on, it’s not just about who I am.

MCSWEENEY: I’m happy that you’re saying that, because with my book, I want people to relate to it and know they’re not alone.

MARNELL: You got kicked out of high school, correct?

MCSWEENEY: I got expelled.

MARNELL: And your parents were on the school’s side, right? That’s the same shit I had in high school. All of a sudden you’re enemy number one, and then you basically just say fine and go gangbusters out into the world because you’ve been rejected by your family.

MARNELL: Another fascinating part of the book for me was the pregnancy at 24. There’s all this chaos and toxicity, then you get pregnant and all of a sudden you’re just handling shit and holding that shit down. Amazing!

MCSWEENEY: It was the fucking pregnancy hormones. I haven’t felt that good since then. I know it’s kind of depressing to say, but it’s true. I wasn’t drinking or doing drugs, I didn’t have any cravings or urges to do that. I was very focused on being healthy and I felt really good about me and Rob at the time—we were really getting along. I think it was because I stopped drinking, so we had nothing to argue about. I just felt so great, and then I had the baby and I felt like shit again.

MARNELL: That stuff is real. It’s really wonderful to read a book like this because you’re living in Tribeca and it’s this glamorous setup—and you know we need the glamor. You’ve got your streetwear brand, it’s post-9/11, nightlife in New York is popping off, and then you’ve got a baby. We’re the exact same age, like two weeks apart, and oh my god, when I was 24…Everything in west Chelsea was happening, the clubs like Home and Bungalow 8—that’s where I was. Lohan had just moved into the city. And you had a newborn and you were still going out. I love it.

MCSWEENEY: It was definitely a crazy time to have a baby, but I guess any time would be a crazy time to do that. Sometimes I wonder if I should have another kid and just use Rob for sperm. What else am I doing?

MARNELL: I was going to pull up something about Camille Paglia. She said something about the genre of memoir becoming tired because it’s so focused on problems. I’ve been thinking about that and wondering like, why did we write and focus so much on our problems when we wrote our books?

MCSWEENEY: It’s interesting, I genuinely thought the same thing and like I said, I was wondering why I was telling everyone this. But there’s so much shit I left out, there’s so much shit I couldn’t put in the book because I can’t, and I didn’t want to. Not everybody needs to know every single fucking problem I have. Or maybe they’ll be in book number two.

MARNELL: I loved the structure that you chose for your book. The chaos theory.

MARNELL: I thought that was fantastic. Definitely an excellent choice for a book, you’re such a boss. Let’s do a quick party review; the last time I saw you we were in the studio with Azealia Banks for that amazing Married to the Mob shoot, which I had such a fun time with. The time before that we were at The Box for Halloween, where Cara Delevigne fell off the stage, Azealia was playing “212,” and you were dressed as Madonna. Are you having a book party?

MCSWEENEY: I haven’t planned a book party but I should. I’ve been in the zone, just cocooning and not socializing at all. Me and you both go through those phases, like I’ve gone out to eat maybe two or three times this month. I’ve been doing my own healing work. January was a dark month in New York energetically. I’ve been slowly getting back, it’s going to be nice out soon and we’re not going to know how to behave. I’m getting ready for that.

MCSWEENEY: It’s actually created some issues for me. Azealia and I haven’t really been talking, not that I talk to Julia that much, but she’s someone I’ve known for a really long time. Somehow I got caught in the middle of it behind the scenes, too. I just don’t want drama, I’m pretty drama-free except for RHONY.

MARNELL: Speaking of RHONY, which Housewife is you and your boxer trainer’s least favorite? I saw you shading someone on Insta.

MCSWEENEY: Oh I can’t tell you that.

MARNELL: C’mon! This is all the juicy stuff!

MCSWEENEY: You’re not getting it out of me.

MARNELL: Okay. I’m going to ask you some of the questions that Interview gave me. Being on TV, especially on the Real Housewives, it can be difficult to control your narrative in the media. Was the book a way to be able to do that?

MCSWEENEY: Look, I could’ve gone into detail about last season and how my narrative in the media and the show got twisted around. Last season was so rough, it was one of the worst experiences of my life. I was grieving on the show, I lost my grandmother in real-time. I had to deal with people being like, “Why were you there? You should’ve gone to say bye to your grandma!” Like, yo I’m at work, I’m not there hanging out with Ramona for fun, I’m getting paid, I can’t leave, I signed a contract. No one said, “Leah go home, stop working.”

MARNELL: Anyone who knows a grandma knows they’d want you to be doing it.

MCSWEENEY: Exactly. So it was really hard seeing people talk about that and being bombarded on social media. Also, reliving my grandma’s death was really hard to deal with because I was so close to her. But I think it made me stronger, because now I really don’t give a fuck.

MARNELL: There’s lots of abusive behavior in the world, we all have it inside of us. Even I do it, like the way I talk about Kim Kardashian is so abusive. I actually don’t know who she is but I will trash her.

MCSWEENEY: I don’t want to be more known than I already am. I’m never going to be addicted to fame because I just don’t like it that much. I don’t get pleasure out of it. It’s nice when someone relates to you, but it comes with so much toxicity—especially Housewives shit.

MARNELL: Let me ask you some more questions. Did you make a choice not to glamorize your party girl past or does it have to do with a certain level of privacy? I think you kind of answered that.

MCSWEENEY: I guess it could have been a book of war stories, like A Million Little Pieces except real. But that’s not what I wanted to do, sorry James Frey. I remember reading his book and thinking it sounded pretty normal. I have stories that are ten times worse than that book, we both do I’m sure, but that’s not the type of book I wanted to write.

MARNELL: The sexy James Frey who wrote A Million Little Pieces, that’s a good example of a gritty book. It’s great for women to do this shit, we get down, we get messy. Feminine chaos, there’s nothing quite like it. Anyway, say hi to Rob for me. Shoutout to Interview magazine, we love you guys, Andy Warhol forever. Andy Warhol and Andy Cohen. I’m looking forward to book number two from both of us. I love you honey!