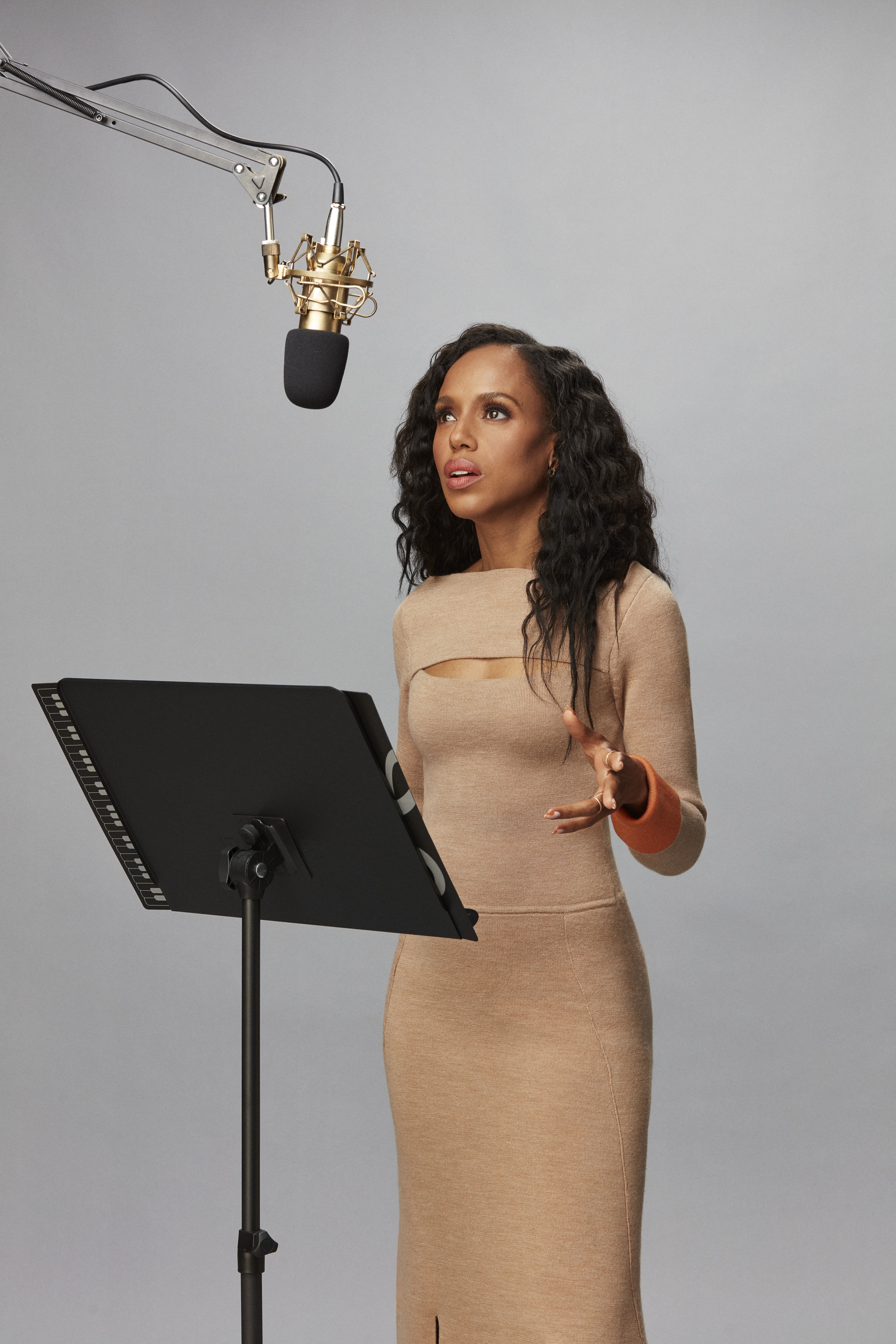 Kerry Washington, at times, resembles nobility more than she does entertainer. She’s regal, composed, confident. She glows. As such, Washington has enjoyed a marquee career with major roles in television and film, from her breakout on Scandal to directing an episode of Issa Rae’s Insecure to playing a character on The Simpsons. Washington also famously hit the silver screen in movies like Django Unchained, Ray, and more.

Now, Washington is a podcaster. She hosts her own, Street You Grew Up On, and has recently partnered with Audible for a new scripted Audible Original series called, The Prophecy, which is set to drop on July 28. The eight-part series is written by Randy McKinnon and is produced by Audible, QCode, and Washington’s Simpson Street. The series, dubbed a “supernatural thriller” set against a backdrop of “natural disaster,” stars Washington as Dr. Virginia Edwards, Laurence Fishburne as Agent Thomas, as well as a handful of other skilled actors.

We caught up with Washington to ask her about her new undertaking, as well as topics ranging from her 2016 film, Confirmation, to how she keeps her sanity in this tumultuous political time.

UITTI: Okay, first question, and it’s sort of a big one, you played Anita Hill in the 2016 film, Confirmation. Have you been thinking about that role or Clarence Thomas lately? Does that film influence the way you think about the United States today in 2022?

WASHINGTON: Of course. I mean, of course! How could I not be thinking about the Supreme Court these days? There’s so much that’s happening with this new court and in ways that we are grappling with this current court’s interpretation of the Constitution. So, I do think a lot about Confirmation. But I think I spend more time thinking about the ways in which each and every one of us has the potential to impact our democracy in really powerful ways. That the power doesn’t lie in one person’s hands. Or even one court’s hands, right? That democracy works because it’s a participatory democracy. And this moment requires all of us. So, I think that’s what I think about most these days. And I feel like Anita Hill really understood—she understood that democracy is not a spectator sport. And she reluctantly came forward with her truth in hopes that she could impact the democracy in positive ways. But I think this is a moment when we all need to ask ourselves, is there more that we can do to be able to impact democracy in positive ways?

UITTI: Dovetailing on that, you’ve been vocal about other political issues of late, from supporting Stacey Abrams to Brittney Griner’s release. How do you balance staying informed with staying sane and choosing to speak up?

WASHINGTON: Well, that’s such a good question. Staying informed versus staying sane is a daily cocktail, I think! [Laughs] You know, somedays I feel like my nervous system can handle more than other days. I try to never entirely put my head in the sand for more than 48 hours. But really, I just try to check in with myself and be honest with how much I can handle and I try to not have unlimited news filtering into my life, whether it’s—I try not to engage with social media without time limitations. I don’t watch the news just in the background. I really try to make sure that when I’m engaging with current events and with the news that I’m making the conscious choice to do so and that I have a plan for when I will be done.

UITTI: You’re friends with the former First Lady, Michelle Obama. Do you have any insight or inside information about whether she might run for office?

WASHINGTON: [Laughs] I don’t have any inside information! But I would say trust her, trust her when she says no.

UITTI: You grew up in the Bronx and now you work in very prestigious circles. You’re the wife of a former NFL star, I saw that your son has a pet lizard. Your family tree includes, I believe, Colin Powell and even can be tracked back to Caribbean enslaved people. Can I ask how does the concept of family live in your mind today?

WASHINGTON: The idea of family these days—I guess I would say, oh, we’ve all had so much time in the last couple of years to, I’ll speak for myself, you know it’s been a really important time since the start of the pandemic to, it’s been an opportunity to really lean into family. And to connect with my close-knit nuclear family. And then also it’s been, as of late, with the vaccine and boosters and more testing, I’ve been able to reconnect with more extended family and that has also been really special.

UITTI: Radio theater has been around for, I don’t know, one hundred years, or more. Theater of the mind. But now there is a new surge when it comes to podcasts. What do you like about this audible, auditory way of telling stories, as someone who has had such a successful career in movies and television telling stories? What brought you to The Prophecy and what did you enjoy about producing and voice acting in the work?

WASHINGTON: Well, I love working in new mediums. I always think it’s very challenging. It helps me grow as an actor to have certain tools taken out of my toolbox and other tools put in. It’s always—it’s a fun challenge for me. So, in the radio—first of all, my mother talks about being a little girl growing up in the Bronx and listening to radio plays. So, there’s something very nostalgic about it. And the fact that my company, Simpson Street, is named after the street my mother grew up on, it just felt right to take on this modality of storytelling. But I also—I loved the opportunity to kind of do like a bare, a stripped-down version of acting. You know, where there we no costumes, there was no hair and makeup. It was just me in a sound booth. Me and my humanity. Me and my thoughts and my feelings, my breath and my movement. There was something so pure about it. It reminded me of kind of being in college and studying—doing scenes and studying in a black box theater, you know? No attachment to the results, just the pure clarity about what is happening in this scene and how and why. What are the stakes? What are the emotional and psychological stakes? So, I really loved all of that, as an actor, that challenge and that gift.  But I also—I just love the premise. When Randy McKinnon first pitched this idea to our company, I was captivated. I immediately thought this is such a provocative, innovative world that he wants to build with this story, and I want to be a part of it!

UITTI: I love how your own podcast is called, Street You Grew Up On. It’s such a beautiful idea. Okay, so let me ask, when did you first feel a sense of creative ambition in your life?

WASHINGTON: Oh gosh. I don’t know. That’s an interesting question. Because I think ambition—oh, I don’t know. It’s so interesting, right? Because there’s professional ambition versus creative ambition. I think I’ve always been ambitious, creatively. But to me that even was just, I just wanted to think big thoughts and have a big and bold imagination. Not that it was necessarily attached to anything that could be consumed as content.

WASHINGTON: Oh god, I don’t know! I mean, to kind of lean into some of the ideas in The Prophecy, I think some of it just requires a lot of faith and trust that things are kind of unfolding—I can’t pretend to be in total control over the way that my career has unfolded. A lot of it is luck and blessings and just showing up, you know? Just being in the right place at the right time in a life that feels like nothing short of a miracle, you know?

UITTI: And there are more audible projects coming, you have two more coming down the pipeline, yes?

WASHINGTON: Yeah, we do. We’re really excited about these series and about, again, being able to tell these stories in really pure, stripped-down ways. They’re really different narratives, but also all with very interesting characters and really moving and thought-provoking material.

UITTI: Switching to a different medium, television has been so integral in your rose to fame and success. You’ve obviously been a part of movies and now podcasting, but how has television changed you and impacted the way you tell stories, from directing an episode of Insecure to being on The Simpsons to your essential role on Scandal?

WASHINGTON: Well, I have a show called Reasonable Doubt that’s airing on Hulu this fall. I’m not in it, I’m one of the executive producers. I have the privilege of kind of producing and shepherding a writer that I love, we came up through the ranks together at Scandal, Raamla Mohamed. She’s the creator of this show but we worked together on Scandal and on Little Fires Everywhere. And now on Reasonable Doubt. And I was able to direct the pilot, the first episode of the show.  I really worked to bring Raamla’s world to life and help her create the visual interpretation of the world that she created. I really feel like in many ways that show is the culmination of a lot of what I’ve learned in television. I try to bring so much of what I’ve learned in television to the material I produce. Every show is different. Every show requires different muscles and different tools. But I really love getting to help to bring these stories to life. 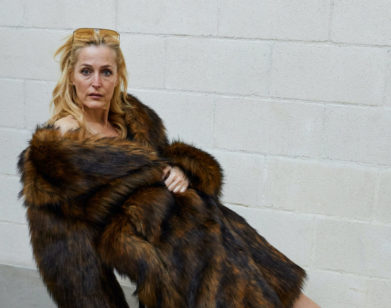