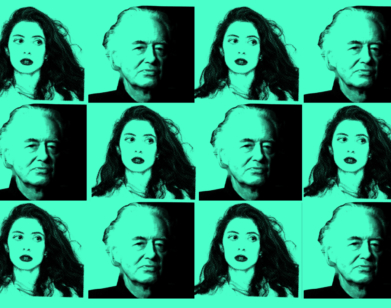 Oct 10, 2019
With Sabet's debut spoken word album "Catalyst," produced by Page, the couple talks how they met, meeting Lou Reed, and paying to produce your own work. Oct 01, 2019
A nominee for this year’s Turner Prize, the artist and audio analyst creates productions that are provocative and often disturbing. Writer Kate Zambreno On Kathy Acker, Guibert, and the Paradox of the Author Photo

Feb 18, 2019
At home with England's favorite anarchist and performance artist. Oct 04, 2017
The New York creative is redefining the limits and language of video art by making up her own worlds as she goes along. Jul 17, 2017
Asia Kate Dillon is standing outside a photo studio in downtown Manhattan, dressed for a shoot in clothes that will eventually need to be returned. Apr 10, 2017
In Hourglass (Knopf), out tomorrow, beloved novelist and memoirist Dani Shapiro presents a sharp look at the realities of marriage. Feb 14, 2017
In 2009, Jessica Henwick noticed the audition poster for what would be her breakout role pasted up on the street in London's Chinatown. Dec 20, 2016
The great master Donald Judd forever changed the state of space and sculpture. With the publication of a collection of his writing, his son discusses the legacy he left behind. Oct 31, 2016
I arrive on set at a photo shoot in Brooklyn minutes too late to catch an epic rendition of the '90s R&B hit "No Diggity." A moment earlier, 20-year-old actress and musician Herizen Guardiola gave an impromptu performance, with rapt crew members staring at her in disbelief. Oct 24, 2016
The Minnesota-born actress Rachel Keller has been fielding questions about the Midwest since her breakout performance as femme fatale Simone in season two of the hit television show Fargo. Sep 19, 2016
Minnesota-born actress Yara Shahidi has been working since she was 6 weeks old. Feb 10, 2016
The young pioneer of clay makes some pretty off-the-wall vessels. A new show this month explores his punk take on order and design. Apr 27, 2015
The first thing you notice about Louise Grinberg is that she's extremely beautiful. Mar 22, 2015
French actress Anaïs Demoustier was cast straight out of grade school in northern France for her debut cinematic role in Michael Haneke's 2003 postapocalyptic drama Time of the Wolf. May 06, 2014
Picture an artistic, hyperkinetic boy growing up in the south of Paris, imagining his future cinematic roles. Apr 19, 2014
Rihanna loves her. But jewelry designer Lynn Ban's vintage-y rock-'n'-roll-inspired pieces are now earning her legions of her own screaming fans. Jan 06, 2014
Like the women he designs for, Prabal Gurung knows what he wants and isn't afraid to gracefully, elegantly go out and get it. Oct 14, 2012
As the quintessential French fashion house celebrates its 60th anniversary, designer Clare Waight Keller opens up about taking on the tall but stylish task of reinventing Parisian chic for a new generation.