In “White Noise,” Olympia Scarry’s first solo exhibition at the ICA in Milan, there is a photograph of a storm that never breaks. The storm clouds are ribbed with ominous lines that echo the striations of the marble, stone and glass that have proven key ingredients the artist’s sculptural works. Unnerving and eerily evocative, Scarry’s sculptures seem to vibrate with conflicting forces—violence and rest, nature and culture, rawness and polish, heft and weightlessness. It’s almost as if something is ticking deep inside of each one, waiting to explode.

It makes sense, then, that Scarry chose to incorporate the element of sound into her first major exhibition—how it moves through material, marks time, and charges the air around us. To mark the opening of “White Noise,” Scarry got on the phone with her good friend, the designer Lazaro Hernandez—who made time in the midst of planning Proenza Schouler’s upcoming fashion show—for a conversation about her astounding audio-visual display.

LAZARO HERNANDEZ: Your show at Fondazione ICA in Milan is called “White Noise.” What does that name mean to you?

OLYMPIA SCARRY: Technically, “White Noise” involves multiple frequencies with equal intensities. I like that idea because it also resonates with “white light,” which appears to the naked eye as white but is really composed of multiple colors. It’s stripped down, but via combination. For this particular body of work, I was thinking about sound being captured in material. Sound as an object is completely silent, but at the same time it marks a record of time, geologically, through tectonic movements in stone. That was the starting point.

HERNANDEZ: What I’ve always loved about your work is that it’s so hardcore and hard-edged. It has this minimal look, but somehow you make it feel soft and feminine and organic. It’s almost like a portrait of you. I want to hear about the materials you worked with—stone obviously being one of them. 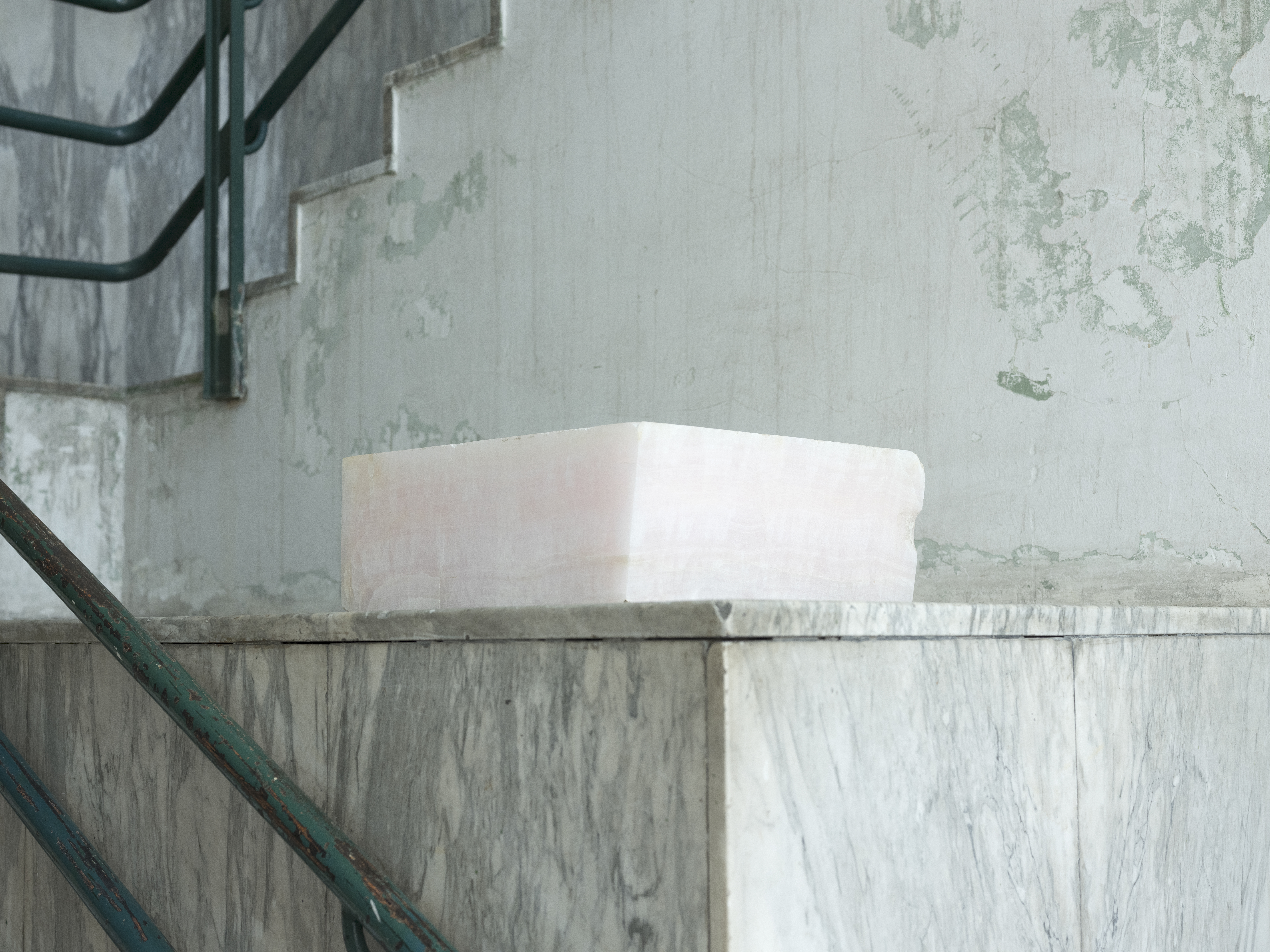 SCARRY: One of the organic materials I used is onyx from Mexico. What attracted me to onyx is that, unlike marble, it’s transparent. I also used borosilicate glass, which is most often used in chemistry labs. It’s UV activated, so its colors are constantly evolving. I also went back to a material I first used in 2009, pure soap, and I mixed it with charcoal to get this massive, deadened, color-absorbent black. That idea came out of conversations about subwoofers and speakers that emit strong frequencies that you almost feel in your body more than hear.

HERNANDEZ: I saw that you did some oil paintings as well, which is a new development. I think of your work as primarily sculptural.

SCARRY:  In a way it’s a new direction, but the patterns came from materials too—this time from silk fabric pressed in water. When you recreate that in oil paint, it almost looks like wood grain. To me it resembles sound. Like soundbites captured on the wall.

HERNANDEZ: You worked with special glass studios to push the limits of color. In the images I’ve seen, the pinks and blues look so beautiful on the museum’s terra-cotta floor. SCARRY: The space used to be an old refrigerator factory, so it’s a very large space.  I left it completely untouched, apart from the fluorescent light. It’s freezing in there as well.

HERNANDEZ: I know you’ve relocated to Milan for the time being to work. Did you make most of the pieces there?

SCARRY: I produced some of the works outside of Milan. The glass rods were done in Pennsylvania and the oil paintings I did in Switzerland. So, it’s multi-geographical.

HERNANDEZ: You also brought sound and film into this show. SCARRY: I thought it could be interesting to invite artists whose work resonates with the pieces. I asked Allora & Calzadilla to incorporate this video piece that we had commissioned for Elevation [the biennial Swiss art festival that Scarry and Neville Wakefield co-curate], which is on the subject of time through markings in a tree. It’s called “Breaking into Trunks” and it’s shot within the tree while the tree is being sliced. It was  shot in the north of Italy, where Stradivarius used to get the wood for his violins. The trees are cut at a particular moment in the season when the sun is at a particular height. This particular tree creates the most incredible, refined sound. Sadly, I learned that this particular forest burned down last year. All that’s left is a skeletal forest, black and charred and quieted for now. Until it regenerates.

HERNANDEZ: And you also worked with musician Stephen O’Malley. How did he get involved?

SCARRY: We were speaking in Paris, and he told me he’d composed a piece while staying on the island of Faro in Sweden—

HERNANDEZ: Don’t they have insanely old trees on that island? SCARRY: Right. His composition is called “Avaeken,“ after this particular oak tree that’s a millennium old. He invited four electric guitarists to perform the piece. It’s performed in a triptych and it’s beautiful. There will be a live performance in the show. I need to get you over here to see it.

HERNANDEZ: I hate that you’ve been away from New York recently.

SCARRY: I know, but changes are good.  I’ll be back in New York in no time.