Inside the colorful, unpredictable studio of painter Cy Gavin Three hours north of New York City, surrounded by yellowing foliage in a near-literary setting is Cy Gavin’s studio—an unassuming barn in Stanfordville, New York. “I was raised in the middle of nowhere,” says the artist. “It kind of looks like this actually, so I had a lot of time on my hands.”

Growing up in economically depressed South Central Pennsylvania, Gavin spent much of his youth hanging out alone, since his parents were fundamentalist Christians and wary of his interacting with kids at school. Instead, he passed the time reading, writing, and drawing, but it wasn’t until a high school teacher encouraged his work that he saw the possibility of pursuing art in a profound way. “She’d meet with me in the morning and I’d bring in paintings in garbage bags, and before class, so like 7:30 in the morning, she would do a studio thing with me and critique,” Gavin says. “It was like the little audience that I needed to feel good enough.”

Gavin got into Carnegie Mellon with a scholarship, majoring in art and minoring in history, eventually making his way to Columbia University for an MFA. Now 32, he’s gearing up for three separate exhibits. The first: his debut solo show in Europe at VNH Gallery in Paris. There, he’ll theme his paintings around his travels through the south of the United States, Bermuda, and Puerto Rico. “And it also deals with thinking about relationships people have with land and I’m thinking about colonization, and space and the experiences people have in that space,” he explains, how the carving out of a space is inextricably tied to its history.

Then, Gavin’s off to display his nocturne paintings in a group show at Mass MoCA, and that’s followed by another exhibition at the Whitney Museum of American Art. It’s quite the rollout and, when we visit Gavin, his studio is that of an artist in the midst of a creative explosion, brimming with color and plant-life, every surface covered in finished, half-finished, or just-started work, primed denim, which he often uses instead of canvas, paintbrushes, buckets—things you’d expect an artist to have—and some that you wouldn’t. Those are the things we explored with Gavin, the unexpected ones.

CY GAVIN: These are agave from Bermuda. They’re called bulbils, they’re like onions. This plant only flowers once in its life, then it dies. In most cases, they’re yellow and they’re small. It’s where the agave nectar comes from, these flowers. But if it’s pollinated it develops into the bulbils, and they fall off and propagate outwardly. But they’re technically the same genetics as the parent, so it’s scientifically the same plant. So it’s this endless organism that has lived for millions of years, and all of these are technically the same plant. But I smuggled them back, because you’re not allowed to bring things back from Bermuda. So because of the shape of them, I wrapped them in Hershey Kiss wrappers and they looked very much like a Hershey Kiss, and I got them across. They were the same size and shape as the Kisses and I resealed the bag and they got through.

I remember where I was [when I found the plant], it was a a railway that is now a walking trail in Bermuda. I’ve given them to a bunch of different people, so they’re sort of growing apart but together, and are technically the same plant. It’s like separating twins. [laughs] This plant’s lifespan is 100 to 200 years, so it will outlive me if all goes well for them. They grow to gargantuan proportions. The parent plant to this was 40 feet in the air and probably 12 feet wide. They grow very slowly. GAVIN: These are teeth! They came from a dental school! I had just driven through the South and I was reading about how dentures were made out of extracting enslaved people’s teeth. And that was, of course, horrifying, but I came to this by reading about George Washington’s famous wooden dentures, which were supposedly made from animal bones. Actually, he had multiple sets made from the teeth of people he owned. It’s disturbing that you’re wearing someone and consuming with someone, and a lot of intimate things happen with your mouth, so it was a really disturbing image for me.

I didn’t actually do anything with them, but I got them with that idea. But then I think about how I don’t know who these people are and I have hundreds of these teeth and it has their DNA in them and this would become a reliquary for people that I don’t know. But at that time I was, and still am, thinking about the cyclical nature of being an organic creature and that you are composed of the same molecular options as anything, that we’re all made out of. Still, I don’t know who they came from, I got them from an eBay account that sells medical stuff, but you also have to be like, “I don’t know what this is about.” Which is why I didn’t use them actually; it felt ethically questionable. SCULPTURE MADE OF SKELETON AND SEA SPONGE, PARTIALLY TAKEN APART

GAVIN: I did use this skeleton that came from an American Bone Fracture institute that was using this to show mediations of different kind of fractures. This sculpture has a lot of gems embedded in that sea sponge. All that sea sponge came from the Bahamas and it went through this Greek guy … Basically what they would do to these to sell them is chop them up, dip them in uric acid, they would become blonde, then they would repackage them for art stores, cosmetics—the Metropolitan Opera uses them. But I wanted them raw so they came directly out of the ocean. He squeezed out all the water and sent them to me in a bail, and then I reconstituted them with a liquid. But the liquid I used was ink so they became a lot darker.

What I didn’t anticipate was that it would smell like the sea because of all the sea salt it had in it, the whole room smelled. It also had little seashells and things and the sea salt rose to the surface making this crystalized, frosted layer. There are more than a thousand sea sponges that I hand sewed together and made this garment that drapes over this. So you’re seeing the armature and everything, but all that should be inside and covered by the long, draping sea sponge. I had to chop it up to even get it up here, and I had to use a pickup truck, I couldn’t get it through the door. People wanted to buy this and I wouldn’t sell it because it felt weird. SCARF MADE BY KELLEY DEAL

GAVIN: This was a little scarf made for me by Kelley Deal from the The Breeders, and she’s in another band called R. Ring and I animated two videos for them. I used to do animation all the time but I never do it anymore because it’s so time consuming. It’s clumsy, I still do video stuff but the animation I was doing was rotoscoping, [which requires tracing over motion picture footage frame-by-frame] and is extremely tedious work that was like drawing. I like it but it takes so long to finish that I would be a different person by the time I finished a project; I wouldn’t care about it as much. But this scarf reminds me of working those projects. This was a collaboration with a brilliant musician and poet, where what I was doing was taking from archives or music I liked and picking songs that meant something. GAVIN: Another one of my mementos is this blanket made by Ektor, which is actually an artwork—it’s in constant progression, so there’s still needles and stuff in it. But I do use it as a blanket! It was a gift but with the caveat of it always being worked on, so Ektor was here about a month ago, he’s in the New Museum show, and he adds on to it continually, it’s all wool. So it’s knitting and crocheting, but mostly knitting. GAVIN: When I was in Miami for seven months, I had no friends there and I was extremely bored and lonely and because I was working in the summer and it was 100 degrees, I couldn’t really work during the day, so my whole schedule was nocturnal. I would just spend a lot of time alone or driving through the Everglades or wherever I’d go, and at some point I got Amber! It gave me enough company so that I wasn’t losing my mind (which I almost was). She’s traveled with me through everything and been party to my life for a little while. CY GAVIN SHOWS AT VNH GALLERY STARTING FEBRUARY 2018; THE LURE OF THE DARK STARTS MARCH 3, 2018 AT MASS MOCA; BETWEEN THE WATERS STARTS IN MARCH OF 2018 AT THE WHITNEY MUSEUM OF AMERICAN ART. 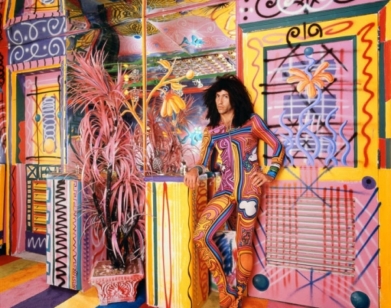