Thirstory: Diana Ross Is the Boss Welcome to Thirstory, where we whet your appetite with pages from the Interview archive that were almost too hot to print. This week, we resurface our September 1976 cover featuring none other than Diana Ross.

In his biography Holy Terror: Andy Warhol Up Close, former Interview editor Bob Colacello recalls that the September 1976 issue broke all sales records in the magazine’s history. Hand-painted by Richard Bernstein, Diana Ross fronts the edition’s cover with a wide, glittering grin—a smile indicative of the fact that Ross was no stranger to breaking records.

By 1976, Ross had a stream of number one hits when she led The Supremes, with songs like “Baby Love” and “Stop! In the Name of Love” solidifying the group as the world’s highest chart-topping vocal group (an accomplishment still unmatched today). As a solo artist, success kept coming for Miss Ross, whose albums and acting appearances made her a bonafide superstar with more no. 1’s and an Academy Award-nomination under her belt by the time she appeared in Interview. Beyond her vocal and acting range, it’s no wonder why eyes follow Ross wherever she goes: she’s a fierce force of nature with legendary legs and lashes for days. Photographed by Chris von Wangenheim, the performer is seen hoisted in the air by a group of hunks like the queen that she is. Unbeknownst to her, Ross would be riding high in that position for the rest of her life as she transitioned from Motown chanteuse to a disco bunny shimmying across Studio 54 and shattering dance floors around the world as she entered divadom. One hundred million album sales later, there’s no question why Ross’s self-anointed nickname “The Boss” sounds so, so right. 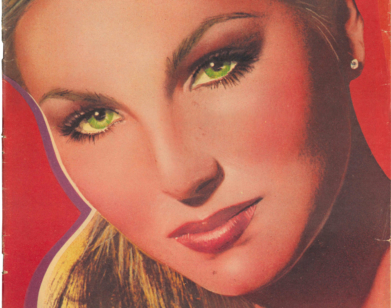