Rock and roll, according to Taylor Momsen, is a way of life. This month, the lead singer of The Pretty Reckless and erstwhile Gossip Girl star has joined the legendary multi-platinum rock band Shinedown (and guest Diamante) for The Revolution’s Live tour— celebrating their albums Death by Rock and Roll and Planet Zero, respectively—and has become fast friends with the band’s frontman, Brent Smith. The pair share much more than their love of mosh pits: each holds the Billboard record for most number one hits on the mainstream rock charts in their respective categories. Here, Momsen and Smith sat down for a conversation about making new music, processing loss and grief, and the catharsis of playing live again.

BRENT SMITH: Well Taylor, let’s tell everybody who we are and what bands we’re in. I’m Brent, and I’m in Shinedown. Taylor, what band are you in?

SMITH: The two of us are on this wild rock ‘n’ roll adventure together.

MOMSEN: And it’s going awesome so far. Right now, we’re getting ready to play a show.

SMITH: I’ve been trying to do a tour with you and your guys forever. Tell me where the idea for “House on a Hill” came from, because that was the song that got me hooked on your band.

MOMSEN: Thank you, first of all. That’s one of my favorite songs I’ve ever written. It’s hard for me to answer a question about where a song came from, because it’s always kind of a mystery—even when you’re the one writing it.

SMITH: Where’d you record it?

MOMSEN: We recording that record in Hoboken. We were almost finished with it, and then Hurricane Sandy came in and wiped out the entire studio and we lost everything. So, you know, fun times. We ended up in a studio called The Barbershop, which was in Lake Hopatcong. There was a lot going on in the world then that was very disarming and disheartening. It felt like there was corruption and power imbalances everywhere you looked. That’s what that song stemmed from, and I just rolled with it.

SMITH: When did you get your first record contract?

MOMSEN: We’ve actually been on different labels for every album. I like to maintain creative control of everything, and I’m a micromanager when it comes to the music. We make the records and then shop them around to see who’s going to be the most supportive partner for each venture. You’ve been on the same label for a while, right?

SMITH: I’ve been on Atlantic Records for 21 years.

MOMSEN: It’s nice to have a long-term partner like that.

SMITH: I was signed out of Knoxville, Tennessee, where I was born and raised. The head of A&R signed me with a band that I was in at that time, then dropped the band after a year. But he came back to me and said, “I want to develop you.” That led me to create Shinedown. We have a lot of lifers in the band—we’ve had the same manager for 20 years. People talk about evil record labels, but I’ve never had that experience. One reason for that is I was taught very early on that you’re only as good as your last trick. I think a lot of times, people forget that it’s called “the music business” for a reason. I am able to navigate between the left and right sides of my brain in that respect.

MOMSEN: That’s a gift, it really is.

SMITH: Some of the best advice I got was to write a lot of songs. You write 100 songs, hope that you wrote 10 really good ones, and pray that you wrote one phenomenal one. Then, you kind of just… start over. That’s why albums are a snapshot of the artist’s life at that time. Tell me about the newest record, because you got some bangers in your new material.

MOMSEN: I don’t want to get too heavy, but there’s kind of no way to talk about it without going into the losses that we experienced. We lost a lot of people very close to us. We were on tour with Soundgarden, which was such a peak for me. I’m the biggest Soundgarden fan in the world. Chris Cornell passed away on the night of our last show. That was crushing to me. I was not mentally prepared to handle that, and it really took me down. We were in the middle of a tour, and I very quickly  realized that I couldn’t get on stage every night and be okay. I couldn’t fake it. So I canceled the tour and went home. Then, I learned that our producer Kato, my best friend in the whole world and practically a member of the band, died in a motorcycle accident. That was the nail in the coffin for me. I spiraled real fast: depression, substance abuse. I fell into this hole that I couldn’t get out of—I didn’t even know if I wanted to. I finally got to a place where I felt like I really needed music again—I was depriving myself of it during that time, and I’d never done that.

SMITH: How did you go about reintroducing music to your life?

MOMSEN: I started from the beginning. I asked myself why I fell in love with music, where did it start? I went through all the bands I grew up loving, and was even able to eventually listen to Soundgarden again, and have it bring me joy. This record was very different than our previous albums, because it almost felt like a first record. It has that unbridled inspiration that you’re always striving for. This record is an homage to those loved and lost, and it’s very hopeful. It captures the arc of grief—at the end, it does get better. The phrase “Death by Rock and Roll,” is very important, because it was something Kato used to say, and a motto that we lived our lives by. We had a recording of Kato’s footsteps, and the record begins with that sound. We play that every show, like he’s walking onstage with us. SMITH: From the moment you guys joined us on this tour, your gusto about performing was so strong. We’re not a band that is complacent in anything—it’s that ideology of having your band be a family. You all help each other up, there’s no mountain you can’t get to the top of. I’m known for splitting the audience down the middle during shows. It doesn’t matter if there are 500 or 500,000 of them, I jump into the audience and walk down line and then get back on stage.

MOMSEN: It makes for a very inclusive, intimate event, even in a massive venue. And are we going to talk about the pyro? The pyro that comes out of the stage that terrifies me? Whose idea was that?

SMITH: That would be me. We use a lot of pyrotechnics in our shows.

MOMSEN: It adds extra excitement. It almost feels like a part of the songs.

SMITH: So, the very first night in Spokane, what were you thinking about?

MOMSEN: That was the first Pretty Reckless show in about four years. I was backstage and it felt very surreal. Like, “Am I here right now? I’m getting dressed. I’m putting on stage shoes. Okay, I’m going to go play some songs.” Luckily, we rehearsed for a very long time, which we never used to do.  Because of COVID, we fucked around for six months in a rehearsal space, for fun. That really took all the nerves out of it—I thought I was going to be super nervous, but actually, I was fine. It was like riding a bike.

MOMSEN: It’s just really fun to play the new stuff too. We put out a whole album during COVID, and it did very well. Multiple singles on rock radio, going number one, and we never left the house! We never played any of it live. So to finally get on stage and play this stuff in front of an audience was awesome.

SMITH: If I’m not mistaken, you hold the record for the most number ones on the mainstream rock charts with female fronted bands.

MOMSEN: We do. I mean you hold the record for most number ones period, right?

SMITH: That’s what they tell me.

MOMSEN: We’re a good combination here. I’m having so much fun on this tour, you guys have been so awesome. This is the perfect way to come back after so long. Thank you, seriously.

MOMSEN: So Planet Zero’s will be out July 1, and it’s an awesome record. How’s it feel to play your next single “Daylight” live before it’s released?

SMITH: The thing that makes this record different was the pandemic. I think it’s the first record that we wrote about what was actually happening in the world. We’re a band that’s been talking about mental health for the better part of 20 years, and we’re ambassadors for the American foundation for Suicide Prevention. This record takes that commitment in a new direction. I gotta be honest, there’s nothing I love more than playing a new song onstage for an audience who hasn’t head the recorded version yet. MOMSEN: It’s like watching 10,000 reaction videos at the same time.

SMITH: It’s like jumping out of a plane with a parachute going, “I think it’s gonna open!” As the tour has progressed,  has there been a singular moment where you were like, “This is pretty rad”?

MOMSEN: The first show was a dream. I don’t even know what happened. By the time we got to that point in the show where the audience was singing along, it felt like a homecoming. It’s so rewarding to leave my house in Maine, where I’ve been for the last four years, and play for thousands of people every night. That means so much to me. I don’t think I’ve had this much fun on tour in a long time, and I genuinely mean that. 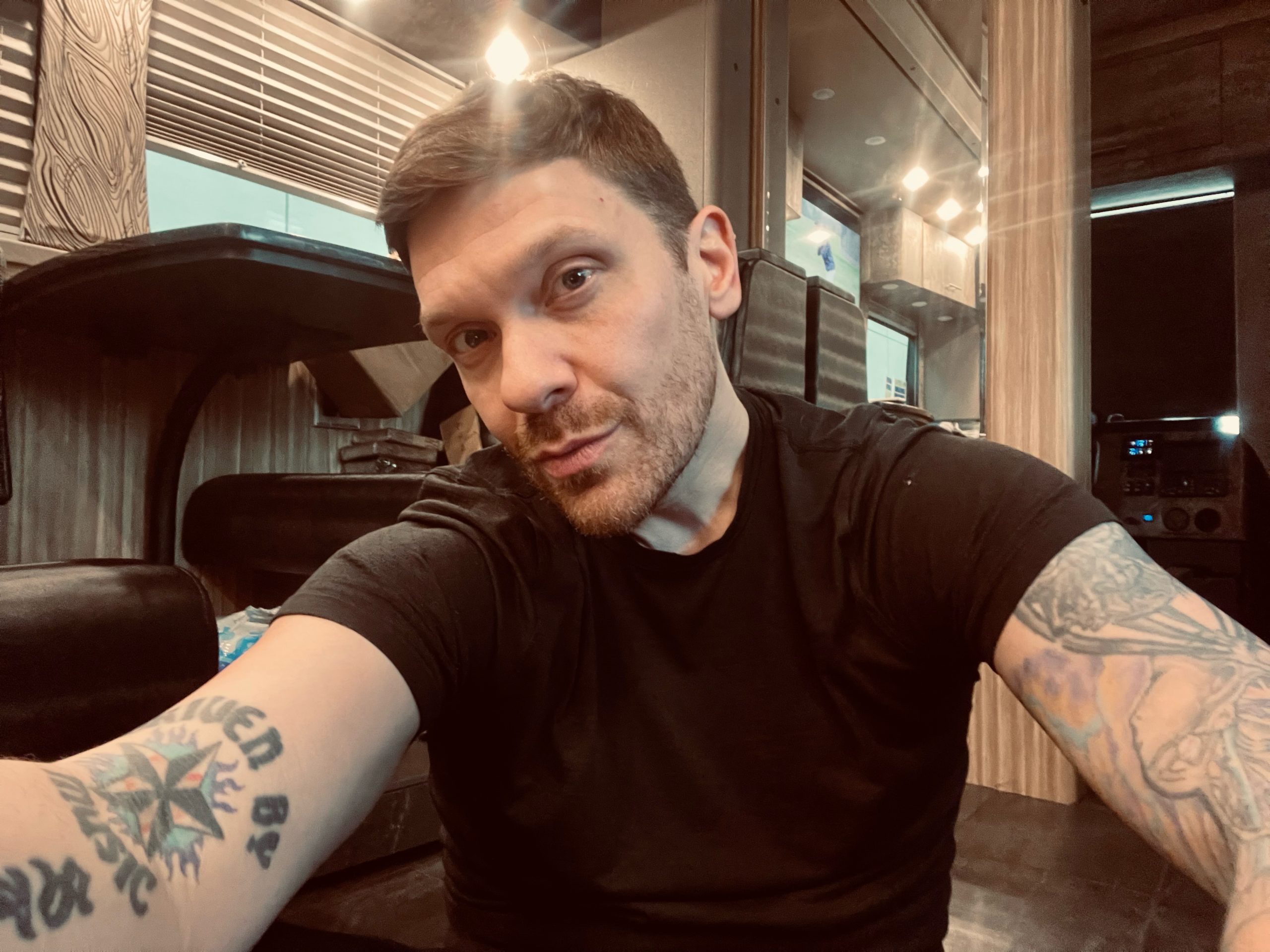