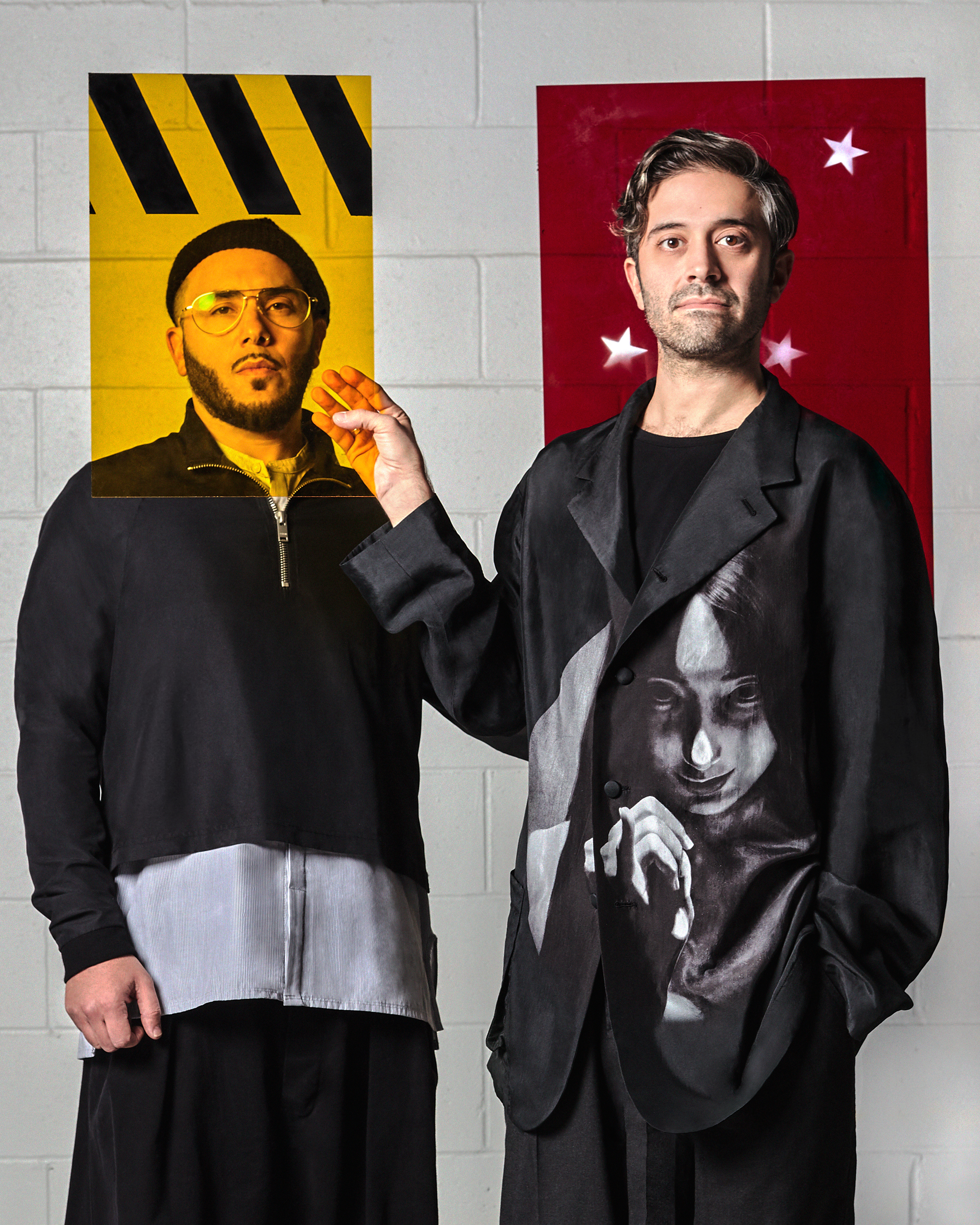 It has never been easy being a Glassjaw fan. The influential, if at times maddening, post-hardcore band—made up of two Long Island kids, Daryl Palumbo and Justin Beck, and a line-up that frequently changed—rocketed to success in 2000 with their debut album, Everything You Ever Wanted to Know About Silence. That grinding, growling record—which saw vocalist Palumbo spitting, screaming, and sobbing through razor-sharp lyrics over Beck’s metalcore guitar riffs—was an antidote to the increasingly mainstream sounds of emo and indie rock. For all those who wanted genuine emotional honesty right alongside the intensity of early New York hardcore, Silence was a revelation. Glassjaw became notorious for their exciting live shows and give-no-fucks attitude (when people called out their lyrics for being too aggro, the band’s response was basically: “Who cares?”) Two short years later came Worship and Tribute (2002). Though recorded on a major label, it was no less brutal and direct, and it solidified the band as the future of hardcore. And then, just when mainstream fame was in sight … nothing, save for a few singles and the Coloring Book EP in 2011, given away for free.

Despite the reasons Glassjaw laid low all those years—Palumbo was dealing with Crohn’s disease, which kept him off the road, and there were side projects, business, and families to grow—the band’s fans never went anywhere. Which is why last November, nearly 15 years after Worship and Tribute, they exploded over the news that Glassjaw would be releasing their third full-length album, Material Control. Self-produced, and written and recorded in a matter of weeks, the chaotic, riled-up, furious album makes up for lost time—and then some. Age has done nothing to soften Beck and Palumbo’s attitude about, well, everything.

MATT MULLEN: When do you get nervous?

JUSTIN BECK: When the phone rings!

MULLEN: You know you guys can have different answers, right?

PALUMBO: Oh I know, he just nailed that one.

MULLEN: Is there anything you regret not doing?

PALUMBO: Part of me regrets not finishing college.

BECK: I regret trying to be as humble as possible. Not claiming authorship when I’ve done something. I think trying to be humble and not look like a prick makes you look like a double prick in the end.

MULLEN: What’s the craziest thing a fan has ever sent you?

PALUMBO: People bring me homemade food, and I’m always kind of creeped out. That’s definitely happened a few times on tour, and it’s like, “There’s no way that’s getting eaten. That’s getting put down as soon as you’re out of my sight.” Also strange homemade t-shirts. And people used to give me pictures or paintings of me—they never look even close to what I look like.

BECK: One of those is my screensaver on my phone when he calls.

MULLEN: What about you, Justin?

BECK: The craziest thing I’ve ever gotten I actually received today in the mail at work. It has to be from someone who knows me, but I can’t trace it. It was a manila folder filled with what I call “nervous paper.” And that means nothing to anybody except like three people. I have this weird thing that I’ve been doing since I was in kindergarten: I enjoy pushing the cuticles up underneath the nail bed. I’m doing it now as I drive through Elmhurst, Queens, I shit you not. And over all these years, I’ve found the best thing to do it with is those subscription postcards that are inside magazines. That dry, matte paper. Whoever this person was sent me a year’s supply of subscription paper in a manila folder.

MULLEN: What are you reading right now?

PALUMBO: A couple of different esoteric, occult-like books that teeter on New Age-y self-help. One of them deals with H.P. Lovecraft. It can’t get any nerdier and less sexy than that.

MULLEN: How were you discovered?

PALUMBO: Glassjaw was discovered…if you’re talking in a big-money, record label-wise way, about six, seven years into me and Justin playing. We were discovered by Don Fury; he was the first record producer who discovered us and essentially plucked us out of the rough. But I think in another way, we were discovered when we discovered each other, right before we started high school. We were 12 and 13. I don’t want to speak for Justin, but that’s a big moment, linking up with your foil for the first time. Glassjaw definitely changed my life in the biggest way possible.

MULLEN: You guys met at summer camp, is that right?

BECK: We were CITs, counselors in training. The genius thing was your parents paid $500 to allow you to work for the camp. Talk about a bad investment. As for the discovery, yeah, we met when we were 13 years old. For me, the early ‘90s were the golden era of music, and it was also when I was discovering myself, and in this embryonic stage of absorption and trying to figure out who I was going to be as a young adult. So all that music is hitting me, and then I’m discovering who I am as a person. And it happened that at that moment, I also discovered my counterpart.

MULLEN: This idea of identity is interesting. I feel like with post-hardcore bands, and hardcore bands, there are sometimes issues with that. The band sees themselves as one thing and the fans as another. Or how prickly labels can be, like how the word ‘emo’ is so loaded for some people. Do you feel like your understanding of the band matches your fans’?

PALUMBO: I feel like it never does. I never felt like it ever did, ever. That’s been such a persistent characteristic the whole fucking time. I think that’s Glassjaw’s identity—the disconnect between what we think we are and what our fans think we’re supposed to be. Whenever I read reviews of our stuff, I sense that.

BECK: Yeah, wether it’s a good or bad thing. I think a lot of people’s perceptions of us are based around our first record. We always look at that first record as a bizarre cross-section. There’s a whole vision we have of the band, but some people make a summation based off that one record, which was just a moment in time for us. But like, there are some things that happened five years before that record that were much more Glassjaw in its DNA and intent more so than that first record.

MULLEN: What did you have for breakfast?

PALUMBO: I had an entire pot of coffee. All I’ve eaten today is two veggie burgers. Both of them consumed in 30 seconds.

MULLEN: What are you most proud of?

PALUMBO: That’s tough. Justin and I both have beautiful children. I’m most proud of my son and my wife. But in terms of what’s been achieved professionally, I’m proud that Glassjaw has gotten to this moment, and that Justin and I are making another record and some zany things are going on. It’s on the tip of my tongue all day every day, between the press and the experience of putting ourselves out there, and putting our personalities out there to be judged and to have amassed a whole unit of music, and how it’s really a celebration of our friendship. I’m really proud of it. We’ve both done other things—and do other things—outside of Glassjaw. But Glassjaw’s the most shining professional thing I’ve been part of. And the fact it’s happening on the scale it’s happening on right now is both an honor and it’s funny. Its hysterical. It’s a fun ride. The whole world’s different.

BECK: The difference in emotional experiences between our first record and now…then we weren’t aspiring to push Glassjaw on the world, that was an opportunity that was pushed on us. Then with Worship and Tribute [Glassjaw’s second album], we had to work to honor a deal. In this most recent situation, there were no expectations to be met. Other than our own personal agendas or desires. So I feel this record was much more personally driven. You could see it as “Shit, I’m 40, it’s my last fucking hurrah.” We were thinking, “Can we still put out a powerful piece of work?” We also just wanted to put out music that we can’t find on the radio or on Spotify. I want to listen to shit that I want to listen to. That goal, selfishly, is the driving force. So more selfish but also more selfless, less ego-driven. I’ve never thought about it like that.