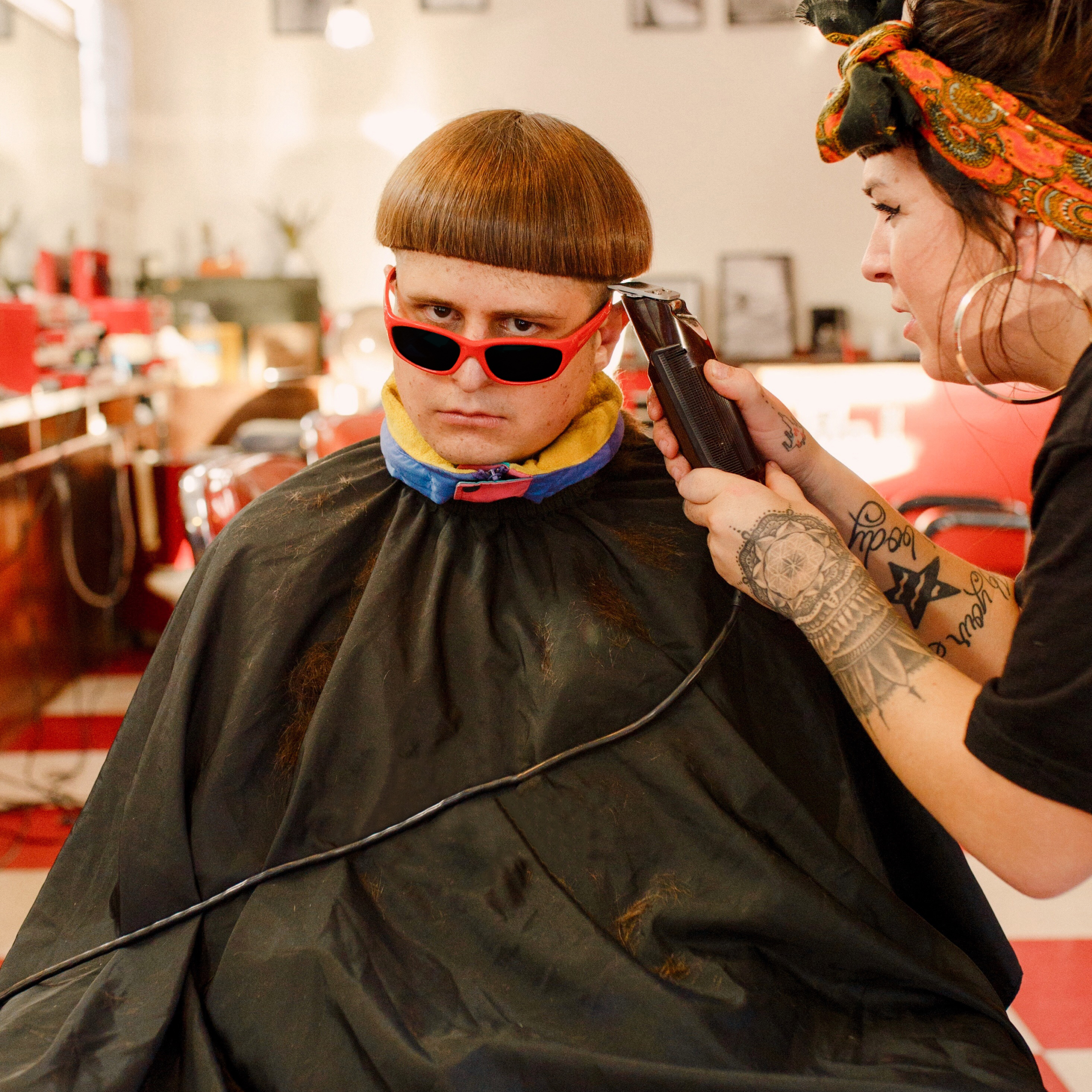 Oliver Tree is as beloved for his infectious swirl of punk, rap, and indie-pop as he is for his bowl cut. With Ugly Is Beautiful, his debut full-length album, the Gen-Z jester has declared his arrival onto the internet’s airwaves. With songs like “Alien Boy” and “Jokes On You!,” Tree has made sure the world knows—if they didn’t already—that he’s in on the joke. To prove that it’s better to be the beast than the beauty, he gave us 10 commandments to achieving the perfect bowl cut. Honor thy barber. —SARAH NECHAMKIN

“Find the best barber in the neighborhood. This may take a few weeks or even months of scouring the internet and calling around town, asking for referrals. It took me three years to find Esmerelda at the Supercuts in Hollywood. Shout out to Esmerelda for perfecting the bowl cut using my 10-step process. Nothing ruins a bowl cut more than a barber who has no idea what they’re doing.”

“Give your barber strong direction at the start and along each step of the way. Know your dimensions and make them extremely clear before starting the cut. There are many ways to accomplish a bowl cut and there’s many different bowl cut styles. Make sure you’re clear on which type of bowl cut you want and then explain to them how you want it cut. Nothing ruins a bowl cut more than unclear instructions and lack of creative direction.”

“Make sure those scissors are sharp. I usually will ask to inspect the scissors before we get started, but that can be taken as a sign of disrespect from some barbers. It’s only been a problem for me a few times. Basically I have ultra thick hair so if the blades are not the right sharpness, it will not be able to cut through the hair, nor will it provide the straight cut desired. Nothing ruins a bowl cut more than a dull pair of scissors.”

“Keep your head facing up and looking straight forward. Find something eye level in front of you to keep your focus. Just remember, keep your eyes on the prize. ABSOLUTELY NO PHONES. If you tilt your head down just the tiniest bit while you’re getting cut, the entire bowl can get lopsided. Stay calm, alert, and extremely focused during the cutting process to avoid this from happening. Nothing ruins a bowl cut more than a tilt of the head at the wrong moment.”

“Don’t talk unless it’s essential, and definitely make sure there’s no joking around with the barber. The last thing you want is to laugh and shake your head, messing up a part of the cut. Every hair piece is essential and one small mess-up can be completely fatal. Also, make sure the barber isn’t talking too much. Just smile when they say anything, but don’t actually respond  vocally. It can be easy for the barber to mess up your bowl cut while they’re telling you about their crazy weekend. Nothing ruins a bowl cut more than a non-essential conversation.”

“Every so often, make eye contact with your barber. This lets them know that you are watching their every move. However, it’s important that you don’t look too much because this can make your barber extremely nervous, which can ultimately be detrimental to the cut. Sweat on their palms can lead to one wrong cut and one wrong cut can ruin the perfect bowl. Nothing ruins a bowl cut more than too much, or too little, eye contact with your barber.”

“Don’t be scared to ask for final touch-ups. If you see parts that need a little love, be vocal about it. A lot of people feel bad or embarrassed asking the barber to keep working on the same haircut for an hour or two. But the barber doesn’t know your head as well as you do. The way a bowl cut sits on everyone’s head is completely unique. For example, my head is extremely round which makes the hair sectors above my temples bow downwards during the cutting process. For this reason I have to ask the barber to do five to six additional passes to ensure the perfect bowl cut for my head shape. Nothing ruins a bowl cut more than rushing the process.”

“If they manage to execute the perfect bowl cut on your head, make sure you give them at least a 30 to 40 percent tip, especially at a place like Supercuts. If they messed it up a little, but didn’t completely fuck it up, you should still give them a least 20-25 percent tip for their time because the bowl cut is a very time-consuming haircut. However, if they rush it and fuck up your bowl cut, just  say how bad it looks and you probably won’t have to pay for it. If you really want to play it safe, just tell them you don’t want them to finish it and that you want to leave. Since the bowl cut hairstyle already looks bad to most people, they will usually agree with you that they made you look bad and let you off the hook. In my experience, they usually will let me go free when they really fuck it up. Luckily, that’s only happened 3 times in my 27 years of various bowl cut hairstyles.”

“If you’re happy with the overall product, then the last step is simple: REPEAT EVERY OTHER WEEK. However, if you’re unhappy with the end result, then you gotta go back to number 1 and figure out where you went wrong. Good luck!”