In September of last year, Taja Cheek released her debut album under the name L’Rain. Dedicated to her mother, who passed away before the project’s completion, the self-titled record is full of lush, ambient soundscapes layered over spoken-word samples and reverb-drenched jazz vocals. The result is a kind of multi-textural sonic collage and a nuanced reflection on love and loss. Just one listen makes it clear that Cheek, a multi-instrumentalist and artist born and raised in Brooklyn, New York, has no interest in adhering to the confines of genre.

Given her ability to blend a kaleidoscopic array of influences into her own work, it’s no surprise that Cheek has found such success as a curatorial assistant at MoMA PS1. Since 2016, she’s been using her eclectic curatorial sensibilities to organize the Long Island City institution’s Sunday Sessions performance series, as well as Warm Up, a 10-week summer series combining music and dance from a diverse array of performers both local and global. For Cheek, these programs are an opportunity to give a platform to artists who defy categorization. As she says, “Musicians aren’t often thought of as artists, they tend to be pigeon-holed and thought of as a way museums and institutions can just bring in more revenue… But Warm Up is the longest running program at MoMA PS1, and it’s always been curatorially driven. So it’s really exciting to be in a place where musicians can try out new things and think extra musically… I think most musicians probably are thinking about these things, but it’s hard to satisfy all of your performance ideas when you’re performing in a bar late at night and you only get 30 minutes for a soundcheck.” In June, the outdoor event program will return for its 21st season.

Dedicated to cultivating spaces for queer musicians, artists of color, and experimental creators who are all too often cast to the periphery, Cheek also regularly offers up the basement of her Brooklyn apartment as a venue for queer noise shows and local band rehearsals. She finds inspiration in those who defy categorization and push the limits of musical performance.

During a break from her hectic schedule, Cheek took the time to jump on the phone and tell us about the up-and-coming artists who inspire her. She laid down a list of boundary-pushing visual and musical trailblazers, explaining, “Weirdos need love too!”

TAJA CHEEK: This duo thinks about their visual presentation as much as their audio presentation. It’s electronic, but the vocals are a really big part of the sound. It might be kind of lame and reductionist to call it operatic, but it is in a lot of ways. It’s got a dark, ambient, droning kind of quality to it. The videos are also extremely striking. I’m drawn to them just because their sound, their sense of performance, and their sense of space is super unique. I think it would be really interesting to see them performing on different sorts of scales. I first ran into them recently at Trevor House, where I was also playing, but I’d been hearing a lot about their live performance for a long time. It’s a really strong female lead, also, which is always something that I’m interested in.

CHEEK: Jennifer Vanilla is one of the members of Ava Luna, Rebecca Kauffman, and this is sort of this alter ego vessel that she’s filling and discovering the identity of as she performs. It’s definitely part 80s workout video, part outer-space experience [laughs]. There’s a strong curatorial bent to everything that she does, she does a lot of collaborations, and will put together performances of artists that she thinks are interesting and also perform herself. It’s kind of hard to put into words what she’s doing, but the best indication of her sort of vibe is that I recently ran into her at BAM and she was just coming from seeing I, Tonya. That was sort of the most iconic moment of hers [laughs]. She’ll be appearing at the Spring Performance Festival on April 15 at MoMA PS1.

CHEEK: I first encountered Jon Bap because they were playing in my basement [laughs]. I hadn’t actually seen them play live before. I remember I was sitting upstairs from the space and hearing them play, and I ran out of my room and down the stairs because they were so incredible I couldn’t even handle it. I rarely feel such kinship with other musicians, and they’re on a totally other level. It’s very groove based in a lot of ways, but it’s also very unexpected. The music’s actually very complex, but it’s easy to forget that because it’s so groovy and so vocal. One track will be an ambient spoken word piece, and then suddenly there will be an early nineties jam, and then they’ll suddenly be some weird, kind of free jazz moment bordered on an R&B song, bordered on something that’s a little more folky. It’s probably one of the best live shows I’ve seen in a long time. They’re sort of tapped into this early nineties, Living Colour moment that Bruno Mars is also tapped in to. I hadn’t actually realized that until I heard “Finesse” and then I was like, “Oh, yeah!”

CHEEK: Right now is an interesting moment for Yatta because she’s really developing her live show, which is super exciting. She makes what she calls digi poems, these sound collages of her voice and other sonic references that she blends together into something pretty unique. It sorta reminds me of the freak folk revival moment many years ago. It’s sort of reminiscent of that, but something totally of its own. She’s really a unique presence.

CHEEK: Yatta has recently been performing with D0UZE; I’m interested in D0UZE in general. As a DJ and sound artist, she thinks a lot about memory and has done a lot of pieces around Mami Wata, this fictional figure that pops up in a lot of different cultures. She did a piece at The Knockdown Center around Mami Wata and that’s been a part of her practice a lot. She’s interested in water drumming, which is something that I think is really amazing. Her Haitian roots are a big part of the work that she does.

FUCK U PAY US

CHEEK: They recently performed at MoMA PS1 as a part of Sunday Sessions. It was actually their first New York performance. They’re really special just because they are so unabashed about their politics and how they choose to live and walk through the world. They bring that onto the stage in a very genuine way that is totally engaging and unapologetic. Plus, the music is just really good [laughs]. They’re a black punk band from LA, and they have punk projects with some of the other members of the band.

Uhuru, who’s the guitarist and also does vocals along with Jasmine, also has a side project called The Uhuruverse. This new video is totally seductive and totally amazing, especially the sense of color and all that. It’s a fun, electronic-leaning track that’s very sex-positive, very femme positive.

CHEEK: Another person who doesn’t necessarily have any recorded music out but who I think is super interesting as a figure is Jeremy Toussaint-Baptiste, who I first encountered because they were working on a piece with Will Rawls, the choreographer. Claudia Rankine was also a part of that piece, and I saw some of the early iterations of the project as it was being developed at BRIC. They’re interesting in the way that they think through sound and spatialize sound. They’ve done a lot of work thinking through the work of Julius Eastman, who also has a relationship with PS1, and they’re sort of bringing that history alive. A lot of people are thinking about Julius Eastman’s legacy right now and I think it’s particularly interesting to think about Jeremy Toussaint-Baptiste as a young person evoking such a now legendary figure in an avant-garde space. All of those things combined are rare.

CHEEK: Reagan Holiday is someone that I’ve been following and admiring for a while. They do a series called Harsh Noise, Beat Face which is a drag noise show. Some of the early iterations of that also happened in my basement [laughs]. I’ve been having shows in my basement for a couple years now, but that was one of the first really packed shows that we had there. It’s really amazing how they’ve been able to mobilize the community since the noise scene can be super bro-ey and super white and super male. The space that they’ve carved out is an important one and I’m really curious to see how that develops.

CHEEK: Michael Foster is a saxophonist who’s been a big part of the noise community that I’ve been helping build as a part of Shade. There are a couple of saxophonists that, even if you don’t play any horn instruments, you hear and you know it’s them. Michael’s one of those people. They’re also contributing to a queer space, and noise scenes tend to be very cis-white-male, straight white male. They also just make the most incredible sounds out of their instrument. You can always tell that it’s Michael.

CHEEK: Sammus is a rapper and producer who’s super interesting to me. Her last record is super catchy, the production is so good, and she’s just such a captivating performer. The first time that I saw her play, pretty much the second she got on stage, everybody stopped what they were doing and just started staring at her because she’s such an incredible performer. By the end of it, she put so much into what she was doing that she was literally in tears. And then people in the audience were also literally crying [laughs]. It’s sort of like a no-name kind of vibe, like, nerd girl rap. It’s also super candid and political in a way that doesn’t feel forced or corny or didactic. She’s really speaking from her own experience in a way that’s relatable.

CHEEK: I should also mention Divide and Dissolve. They’re amazing. They’re a metal band from Melbourne, and they’re about to start a tour in late March. They’re super amazing and super politically engaged. It’s metal, but it’s really, really great.

ANNIE MURNIGHAN: Anything you’ve been working on recently? Do you have anything coming up under L’Rain?

CHEEK: I will! I’m gonna be part of the Mel Chin exhibition at the Queens Museum and that involves a recording that’ll be released. I’m also releasing my record on vinyl in late March, which is exciting! And there will be remixes as a part of that.

L’RAIN’S SELF TITLED DEBUT RECORD IS OUT NOW ON ASTRO NAUTICO. 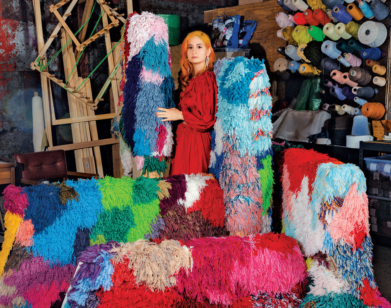 The World According to Karen Finley