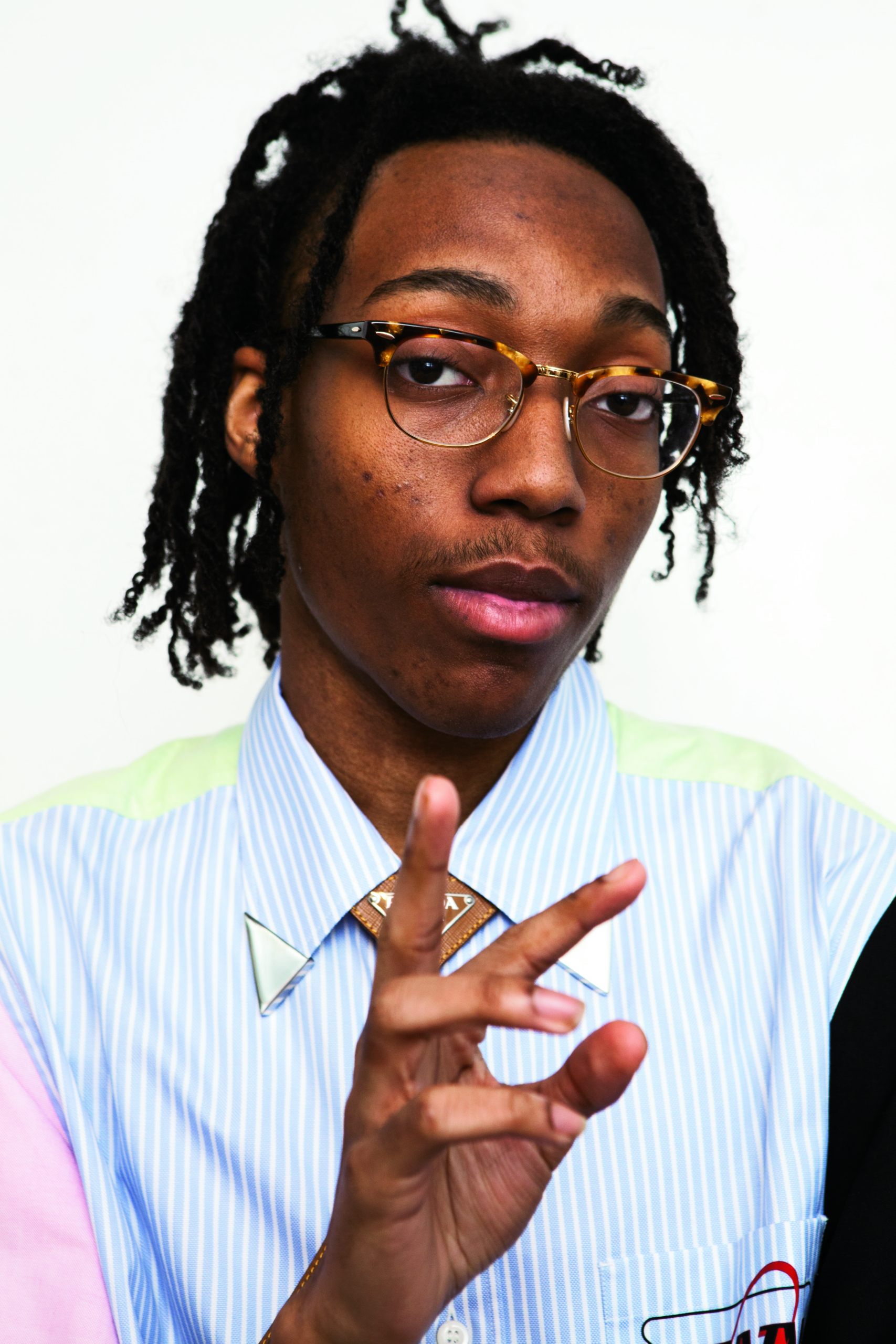 Shirt and Bolo Tie by Prada. Glasses (worn throughout) Lil Tecca’s Own.

To understand the appeal of Lil Tecca, look no further than his teeth. While many rappers flaunt diamond-encrusted grills, the Queens native rocks braces. He is, after all, just 17 years old, making him one of the only high schoolers in the nation with a song that has been streamed more than half a billion times. That world-devouring hit, “Ransom,” is a melodic, dancehall-tinted ear worm with auto-tuned verses about hip-hop hallmarks such as expensive clothing and even more expensive cars, neither of which Tecca owns. He is instead just a kid who still lives in his parents’ Long Island home, absorbing the rap-star lifestyle without actually living it.

That’s about to change. “Ransom,” which was recorded after Tecca was invited to Los Angeles by the music collective Internet Money, catapulted him to the upper echelon of a generation of rappers who are content generators as much as they are musicians, using the internet to make, market, and distribute their own songs. Now, instead of going to prom, Tecca is getting ready to release his major-label debut, Virgo World. The up-and-comer talks to rap legend Rico Nasty about the moment when the braces, at least metaphorically speaking, came off.

RICO NASTY: Where did you get your name?

LIL TECCA: I saw some girl with the name Tecca on the ’gram, and I was like, “That’s fire,” so I just took it.

NASTY: What’s some of the most lit shit that’s ever happened at one of your shows?

TECCA: Me coming out before Swae Lee at the Nassau Coliseum. It was crazy because I kind of blew up on Long Island first, and that arena is on Long Island.

NASTY: Did you go to rap shows when you were younger?

TECCA: Nah. My first concert was my own.

NASTY: That’s some real rock-star shit. I’ve never heard anybody say that. I think my first concert was Chris Brown and Soulja Boy.

NASTY: Bro, there was niggas hating on Soulja Boy.

NASTY: That’s true. We’re both motherfuckers who get hate for being who we are. What can you tell other weirdos who look up to you, about being themselves and not caring what other people say?

TECCA: I’m preaching that shit 24/7. Anyone who looks up to me probably feels comfortable being themselves because I’ve always promoted that. I feel like people search for the right crowd or the right people to be around, but they’re not turning around and looking at themselves.

NASTY: That’s one of the reasons why I fuck with you so hard, because when I heard your music, the image that came up in my head was like, “He probably looks like all the other guy rappers.” But the way you dress, the way you carry yourself, everything is very different. Keep doing that shit.

TECCA: I appreciate that. NASTY: Another weird thing about you is that you’re still in high school. What the fuck is that like?

TECCA: It’s not like I’m waking up at 7 a.m. and going to school anymore, but when I was, it was hard to manage. It was getting impossible.

NASTY: What was impossible about it?

TECCA: When I’m doing something and I see the vision for it, I try to put all my energy into it. When I feel like I can’t do that, I get really frustrated. When I went from Tyler to Tecca, people didn’t know how to accept it. A lot of people would try to dumb down my success, but everybody knew I was lit so I didn’t care.

NASTY: I’m grown as fuck, but people love trying to dumb down my success. When you made “Ransom,” where were you?

TECCA: I was in L.A. with Taz Taylor [the founder of Internet Money], at his house. The beat was sitting in a Dropbox folder. “Ransom” was the third song or fourth song I made that day. It took me two hours to finish the whole thing.

NASTY: When you made it, were you like, “Damn, this is extremely catchy. I’m a little bit scared of what the fuck might happen with this one”?

NASTY: Did you go to prom?

TECCA: My prom hasn’t even happened yet, but I’m not going to that shit.

NASTY: What! You have to go to prom.

TECCA: Nah, that’s so lame. I don’t even talk to the kids at school. I used to sit at lunch by myself. It would be hella awkward if I pulled up to prom.

NASTY: But you’re Lil Tecca! You could shut that bitch down. Your mom must be like, “Babe, please go to prom! I want to have that moment.”

TECCA: My mom just wants me to graduate. She doesn’t care about no prom.

NASTY: My mom was on my dick about prom. Maybe it’s because I’m a girl, but she was super adamant about that. Do you have any pets?

TECCA: I have a dog.

NASTY: I know a lot of rappers have monkeys. NBA YoungBoy had a tiger.

TECCA: Wait, what? He had a tiger?

NASTY: Yeah, a baby tiger. I’m pretty sure you can get one illegally. A lot of rappers get exotic animals, like those naked cats.

NASTY: Yeah, but I heard they’re not even really naked.

NASTY: What makes you think that?

TECCA: Imagine a monkey adopts you and brings you to the jungle.

NASTY: Now I don’t have to worry about you getting a random monkey and then worrying about what happens to that monkey. When you record, is it one of those things where you wake up and you just do that shit yourself, or do you go to a studio?

TECCA: The studio is the main vibe, but if I have energy and there’s a mic in a hotel room and I’m inspired, I’ll record. Shirt by Y-3. Tank Top by Calvin Klein Underwear. Pants and Belt by Celine by Hedi Slimane. Bracelet, Chain, and Pendant by GLD.

NASTY: When I go to the studio, I need the light to be either blue or red, and I need my party pack. It’s basically everything I’m going to need: Don Julio, fucking everything. Are you specific like that?

TECCA: Hell nah, I don’t got no party pack.

NASTY: Do you smoke weed?

NASTY: You’re answering that like you’re lying. I smoke a lot of weed so I always have the munchies. That’s why I keep a party pack because you never know when you’ll be hungry as shit. You need to get you a party pack, even if it’s a bottle of water and a bag of chips.

TECCA: I go to the studio and that shit is empty. No food, nothing. You wouldn’t pull up to my studio.

NASTY: No, I would not. You need some drinks. You don’t drink?

NASTY: So you don’t do drugs, and you don’t drink. Is there a reason for that?

TECCA: It ain’t no specific reason, for real.

NASTY: Do you have brothers and sisters?

TECCA: I’ve got three sisters and one brother. I’m the youngest.

NASTY: And I’m pretty sure the wealthiest. Are you close with your parents?

TECCA: My mom came on tour with me for a week.