How Kimbra found a better version of herself with Primal Heart 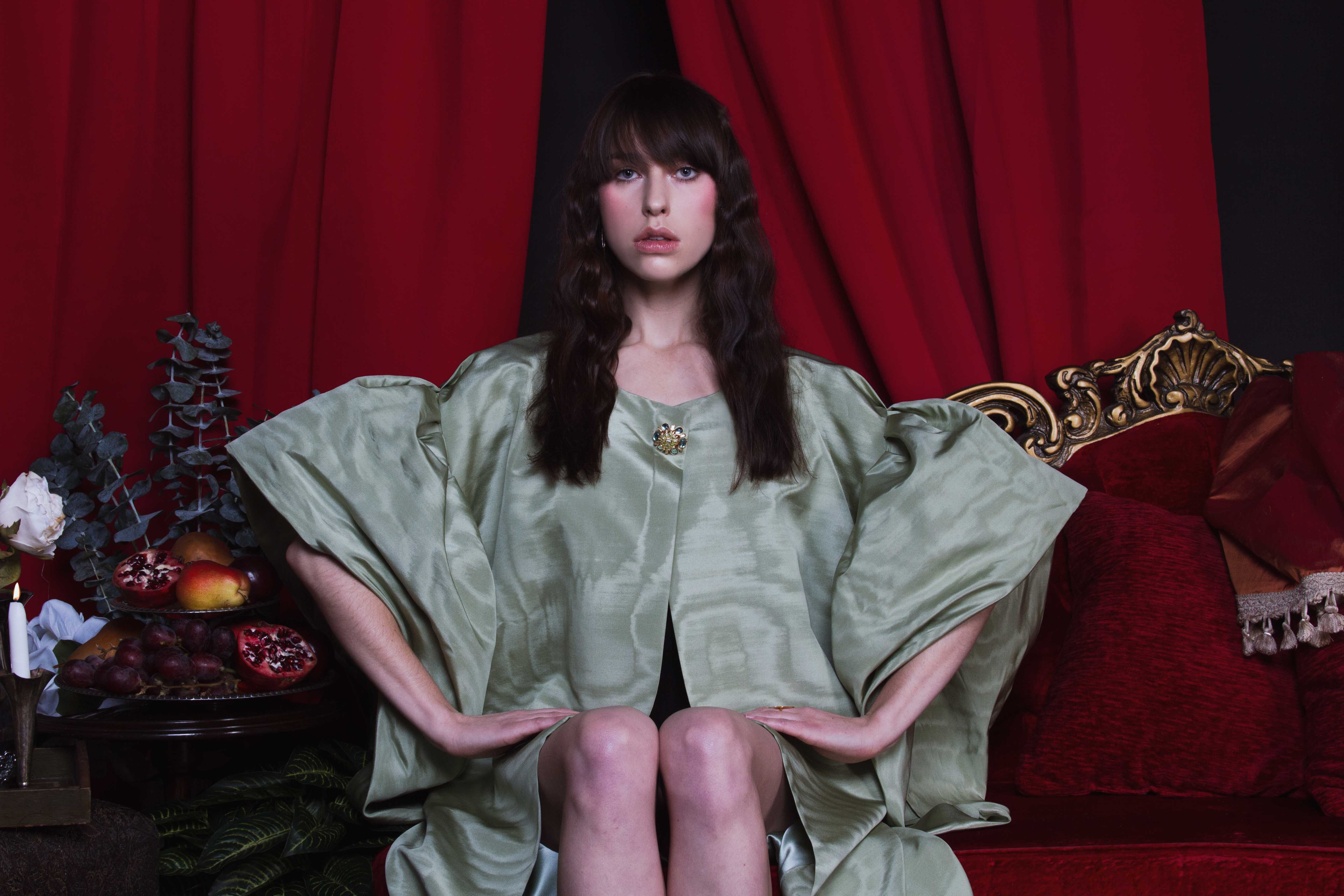 “Next time I’ll be kinder with you,” Kimbra promises in the opening verse of “Version of Me,” the achy, ‘90s-inspired ballad and latest single off her forthcoming album, Primal Heart. While the tender pledge seems most likely aimed towards a lover—“There’s a better version of me, stay for the person I’ll be,” she later pleads—the sweeping confessional reverberates with an air of intimate self-reflection. It almost feels like Kimbra is reassuring herself.

Six years ago, the New Zealand singer-songwriter broke onto the U.S. airwaves in a major way thanks to a featured verse on Gotye’s “Somebody That I Used to Know,” the art-pop breakout that invaded every radio station and coffee shop in 2012. The collaboration earned Kimbra Record of the Year and Best Pop Duo/Group Performance at the 2013 Grammy Awards—a well-earned achievement that, nevertheless, eclipsed the success of her solo debut album, Vows, which bowed at No. 14 on the Billboard 200 in May the previous year.

The album, which featured colorful indie-pop singles “Settle Down” and “Cameo Lover,” showcased the artistic breadth of a performer who’s more eccentric and autonomous than the fleeting smokey-voiced siren featured on merely six lines of Gotye’s juggernaut. But Kimbra wasn’t done morphing: In 2014, after relocating to a sheep farm in Los Angeles, she returned with her sprawling sophomore studio album, The Golden Echo. Leaving the quirky, folksy stylings of Vows behind for something more elastic and experimental, she dipped into a sticky-sweet mix of electronica (“Love in High Places”), hip hop (“90s Music”) and disco (“Miracle), polarizing critics who couldn’t quite keep up with the artist’s Darwinistic transformation.

Four years later, and here is yet another version of Kimbra: confident, self-actualized star and feminist pop warrior. The glossy, neon sheen of Primal Heart is a slick container for the raw feelings contained within. Songs like “The Good War,” “Recovery” and “Human” explore the innate beauties—and difficulties—of what it means to be part of the human race, including frank discussions of sexual assault.

“In subtle ways, [moving to the city] brought out different kinds of strengths in me and has challenged me, because I think you have to be very independent in New York,” Kimbra shares. “Even setting up my own studio was a big deal; not working out of other people’s studios all the time and having my own space was liberating.”

The move, which resulted in what may be her most personal and profound album to date, also liberated Kimbra in another way. “I was able to move away from some of the decorations I’ve felt comfortable hiding behind in the past,” she admits. “I’d like to think this album is me sitting down and taking the listener’s hand, looking them directly in the eye and telling them my story.”

ERICA RUSSELL: You recorded Primal Heart primarily in New York City, while your last album was recorded in Los Angeles. How was that different for you, writing and recording on the East Coast versus the West Coast?

KIMBRA: That’s quite a different thing to do, right? A lot of people move to Los Angeles for the access to the music industry and for the opportunities there. This time around, I wanted to explore some other options. I wanted to be a kid in the playground and explore the breadth of my imagination. I wanted to ground myself in a different reality, somewhere I could be surrounded by the vitality of life in all its forms.

RUSSELL: What drew you to New York City?

KIMBRA: When I’d visit New York before, I’d get this overwhelming sense of boldness.  I could just be myself and meet different kinds of characters … I wanted to harness that. I think it comes across on this record because I’m able to speak in a more direct way than I have in the past. That comes from being surrounded by a city that demands you to look outside your window and see everything that’s right in front of you and interact with people every day. Even the political climate is right outside your door.

RUSSELL: I get the sense that a lot of these songs were catalyzed by discoveries you made about yourself while experiencing the city.

KIMBRA: Having some experience outside of the bubble of the industry helped me understand myself as a musician a little bit more. I learned more about the rest of the world and myself. When I moved to New York, I wanted to write about those things — the sort of connectivity between all people that’s at the center of who we are in all different cultures. We all experience the same things: loneliness, confusion, insecurity, fear, but also ambition and the capacity for selfless love. In New York, you’re surrounded by people who are so different than you all the time, but you find this beautiful connection to strangers down the street.

RUSSELL: So much of what you’re saying is encapsulated by my favorite song on the album, which is “Version of Me.” What does the best version of you look like? And do you feel like we can ever truly become the best versions of ourselves?

KIMBRA: I see myself striving for self-development. I’m always trying to push forward and advance as a person, reading books and trying to understand myself better. It can be really disheartening when you realize you’re falling into the same habits or treating the people you love badly. That’s the micro-answer: struggling, as individuals, with our desire to be free while also chained to some kind of constant cycle of being flawed as a human.

RUSSELL: You ruminate on challenging themes on songs like “Everybody Knows.” I was so moved the first time I heard that song, and I appreciated the essay you wrote on Tumblr. Why did it feel like the right time for you to talk about sexual assault? Was putting that into words cathartic?

KIMBRA: It really was. I think when you’ve been in the public eye from a young age, it can be hard to speak out about things that are difficult to open up about. In the past, I wrapped a lot of my music in metaphor and didn’t often get to speak directly about things I wanted to because of a fear of being misunderstood or misinterpreted by bad journalism, to be honest … But I found my courage. To say to someone that the whole world is watching you; to let that be a statement of declaration for myself and other people; to not be scared to speak out, that’s important. The song came out around the time when lots of people were coming forward [about their experiences].

RUSSELL: You’re one of a small handful of Grammy winners from New Zealand. What was your reaction to Neil Portnow’s declaration that women musicians need to “step up” in order to be taken seriously within the industry?

KIMBRA: To me, it was a baffling, ridiculous response. I played a show after I heard that and thought, laughing to myself, “Wow, I guess I’m stepping up!” There seems to be a different measurement of talent [for women] and yet, we’re so loudly and clearly present. It certainly reflects a certain ignorance or lack of understanding of what’s actually happening in music.

I’m in the industry working everyday with incredible women who I choose to work with not because they’re women, but because they’re incredible at their jobs … Overall, I try not to take those comments too seriously. I see how many hard-working women there are. It’s very clear to me that they are stepping up.

RUSSELL: “Top of the World” is a very powerful manifesto. What makes you feel like that? When do you feel empowered?

KIMBRA: I think that song is very much about ambition and striving towards great heights. There’s something very powerful about bettering yourself, and there’s something beautiful about singing that kind of declaration. In terms of when I feel like that, I would certainly say when I’m on stage and can feel the energy of the audience around me.

RUSSELL: What did you think about Regina Spektor’s critique of the song?

KIMBRA: That was really cool. I loved watching her reaction to the music, and that it made her feel powerful, because we have some similarities, in a sense … I’d love to talk to her someday.

RUSSELL: I think you two need to collaborate.

KIMBRA: Yeah, that would be awesome.

RUSSELL: Speaking of collaborations, you worked with Skrillex on “Top of the World,” but I also heard Childish Gambino was involved?

KIMBRA: We had a few sessions together and initially, we were both freestyling for the song. Originally, we wanted to finish it together but he had just started working again on Atlanta and some films. I wanted him to be involved in the record in some way, though, and he inspired me. Donald [Glover] played a big part in instilling me with the confidence that I could take the track all the way. It’s such a different style for me, the spoken word lyrics, but it came out really cool.

RUSSELL: Ultimately, what is your mission statement for Primal Heart?

KIMBRA: Primal Heart is about the journey and evolution of the human species. For better or for worse, we must collectively come together to be better and to end the cycles of history. It’s something we can relate to in every culture—putting some people on pedestals while pushing others down. This album taps into that bigger conversation of, “What are we? Who are we? Will we escape the cycles that we find ourselves in?”