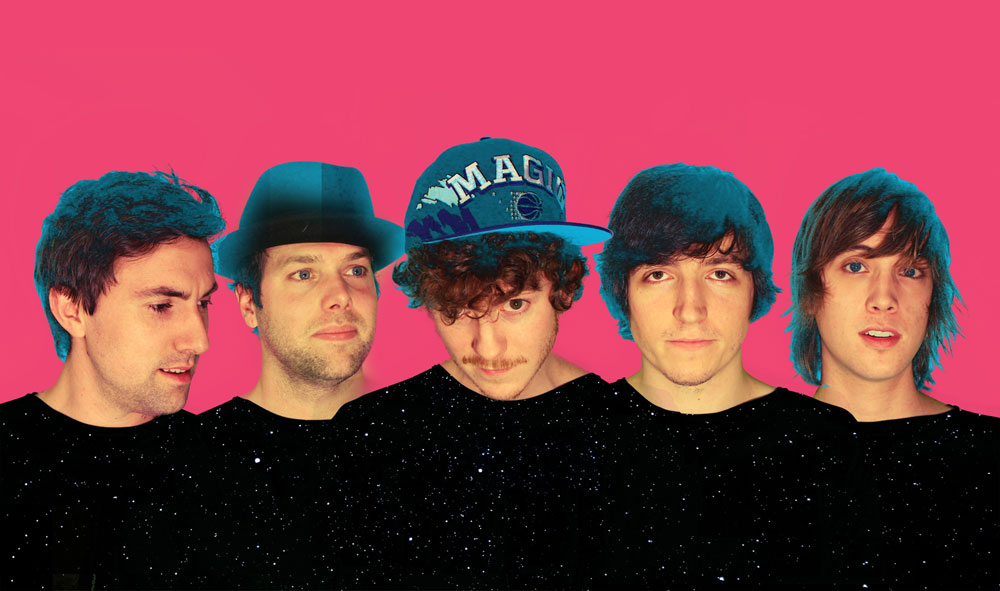 Zachary Evans, the vocalist and guitarist for the Cincinnati-based band, explains that “[Pop Kiss] is about having strong, intoxicating feelings for another person—feelings that are so intense, fresh, and exciting that they cannot be conveyed through words.” Speaking for the five-piece as a whole, he continues, “Instead, [the emotions] are projected in fragmented, semi-conscious streams of thought that describe the mind-altered state of affection.”

Staying true to the themes of fragmentation and surrealism, the group backs the track with a music video, which is streaming exclusively above, that features men sporting high heels, spaceships spiraling through a galaxy of winged llamas, hand-lettered words, and swirls of bubblegum pink and canary yellow.

Although it was filmed and directed by Roman Luck of Beautiful Day Visuals, the video is also filled with Evans’ illustrations, which were inserted during post-production. Partially inspired by Japanese graphic designer and artist Tadanori Yokoo, Evans notes that the illustrations “took a bit of love, flower power, positivity, and 1960s philosophies, and projected them through the modern pop-rock kaleidoscope that is Automagik.”

“Pop Kiss” will be included on the band’s forthcoming EP Beach Fuzz. “We’ve been through some tough times in the recent years, and music was our cathartic outlet for those tough times,” Evans says in regard to the amplified sentimentality heard within the band’s new songs. With fun and gloriously inane videos such as the one above, we can’t help but think the music did the trick.