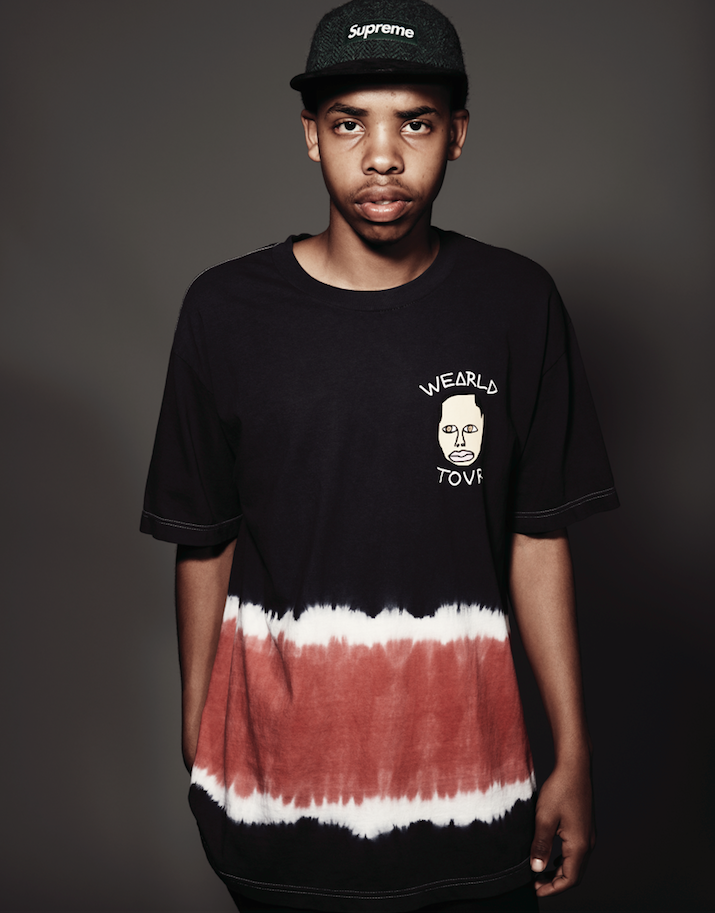 “I see it as some fucking songs,” says Earl Sweatshirt with typical nonchalance during a recent call from London, where he was performing a few shows with his Odd Future mate Tyler, the Creator, in support of his recently released (and critically acclaimed) major-label debut, Doris (Columbia). “Nothing is a conscious decision to be different.” Nevertheless, Earl might very well be the brightest face of what hip-hop is becoming. There are no cute R&B singers on the choruses to his songs. Instead, the surly 19-year-old rapper conjures grimy THC visions with a cocky insouciance that is once elusive, lazy, virtuosic, funny, and morbid.

Born Thebe Neruda Kgositsile (his father is the South African poet Keorapetse Kgositsile), Earl first hooked up with Odd Future in 2009, when Tyler reached out to him after hearing a smattering of tracks that Earl had posted to his MySpace account (remember those?). The L.A.-based collective, of course, went on to generate tremendous buzz over the next couple of years while forging a new hip-hop aesthetic that’s druggy, rebellious, weird, and cooly nihilistic.

While his pubescent mustache makes him look like he is trying to appear old enough to buy beer, Earl has undergone a kind of psychological growth spurt in the past couple of years. Like some of his Odd Future cohorts, Earl’s early raps were full of jagged monologues about rape, pot smoke, and couches. But in 2010, his mother, Cheryl Harris, a UCLA law professor, got fed up with what she saw as her son’s slide into juvenile badness and sent him to Coral Reef Academy, a retreat for at-risk boys in Samoa. “It was just basic delinquency,” Earl says of his mom-induced sabbatical. “I was smoking weed, experimenting with shit, just fucking up. I figured I could rap, so I stopped doing everything else.”

With Earl’s disappearance coming just at the moment his profile was rising, fans were displeased—kids at Odd Future concerts wore free earl T-shirts, and his mother received threats. But while Earl was performing community service at Samoa Victim Support Group, a center for survivors of sexual abuse, he had an epiphany. “My mom was trying to get the point across to me that the shit I was talking about was real life, and the words carried weight,” he explains. “So they sent me to this victim support group, and there is no way I could look at that and continue to say the shit I was saying and think it holds no water.”

Earl returned to L.A. in February of last year—more popular than ever. The mystery surrounding his absence fed the interest, but his new album proves there is force behind the hype. His raps are still full of macabre wordplay, and the music still has an abrasive, dyspeptic air. But there’s introspection to his rhymes now—a few glimpses of the sly, shy young man peeking out from behind the persona he has created. And the rapper who pretends he cares about nothing nearly admits that he wouldn’t mind if people like his music. “It would be ridiculous to say I don’t want to sell records,” he says. “But I trust my taste. And if a lot of people fuck with it, then awesome. And if not, then awesome.”