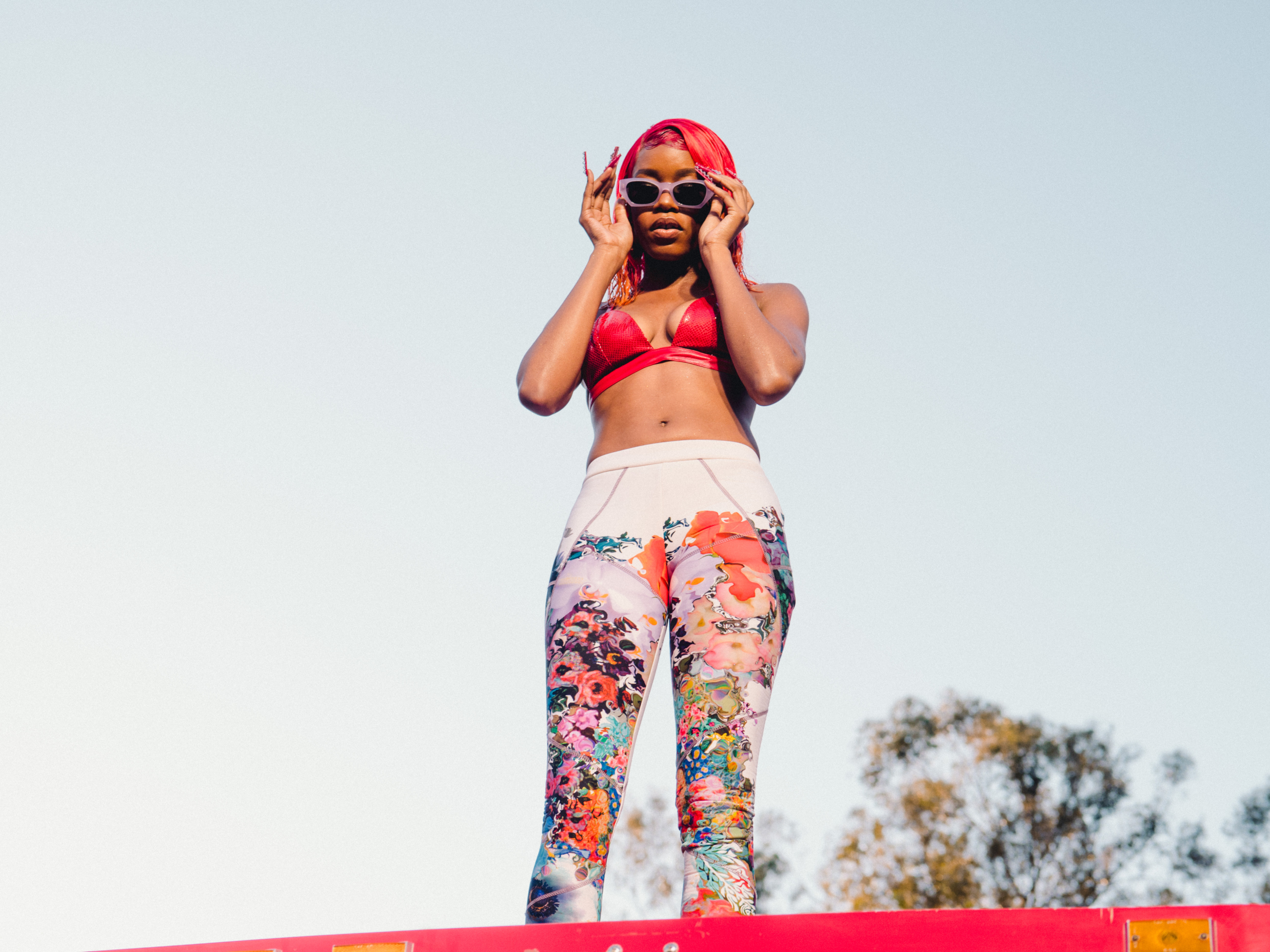 This is “Add to Queue,” our attempt to sort through the cacophony of music floating in the algorithmic atmosphere by consulting the experts themselves. Our favorite musicians tell us about their favorite music—the sad, the happy, the dinner party-y, the songs they want played at their funeral. In this edition, we speak with Cookiee Kawaii who recently released her project Club Soda Vol. 2. which features the hypnotic and mesmerizing single “Vibe (If I Back It Up).” With musical influences ranging from Daft Punk to Missy Elliott, Kawaii shares what’s on her playlist.

JULIANA UKIOMOGBE: How do you feel now that your project, Club Soda Vol. 2, is finally out?

COOKIEE KAWAII: I’m super happy. The feedback that I’ve been getting is amazing, honestly. I was so nervous and excited because I knew that, even though I’ve put out bodies of work before, I knew that this project was very important. Releasing it  definitely took a lot of pressure off my shoulders. And then of course, just seeing all the positive feedback and knowing that everyone’s just loving it has been great. Love it.

UKIOMOGBE: What artists or albums influenced the project?

KAWAII: My main influence was Jersey club music and culture. Jersey club music is an underground kind of sound; people know about it, but not really. I was trying to create a body of work that represented that. I feel like what made mine different is that I’m really in tune with what the the kids are doing. In that way, they inspired me: the youth, the kids, the ones that are doing dance battle events in Jersey, and the ones on TikTok. Just seeing what they’re dancing to and what appeals to them inspired the kind of direction as far as sound, or even what I want to talk about. So yeah, the youth, honestly. I didn’t think of it like that, but now I’m thinking about it. It’s not even that I want to make music that’s trendy, but you just want to get people’s bodies moving. It’s all about dancing and movement since we’re in the house and we can’t do much.

UKIOMOGBE: What’s your favorite song of yours?

KAWAII: My favorite song by me is “Energy,” the original or the club remix. I honestly thought that song was going to be the one that blew up, more so than “Vibe.”

UKIOMOGBE: I really love your music videos. They’re so vibrant and fun. What’s your favorite music video of all time?

KAWAII: I probably couldn’t pick my all time favorite video, but I can pick an artist. Missy Elliott is one of my only influences when it comes down to how I want to do videos. What she’s done with incorporating her style and dance into her videos, that’s what I want to do. Every single Missy Elliott video is what I aim for. Even with my video for “Vibe,” I specifically told my director, “That’s our inspo, that’s our influence. Whatever we do, I want people to get that vibe from it.” And we nailed it. When it comes down to incorporating dance in that quirky kind of way where you don’t know what to expect, Missy is it.

UKIOMOGBE: What’s the last song that you listened to?

KAWAII: “Something About Us” by Daft Punk. I actually listened to that and the other night.

UKIOMOGBE: I love that song.

KAWAII: That’s my favorite. That’s my song. I’ve played that song as the most random moments. It’s one song that I always pick up and play, either that or “One More Time.” It always helps me clear my head for some reason. Daft Punk always puts me in a good mood. UKIOMOGBE: What music did you listen to while you were growing up? What did your parents play in the house?

KAWAII: Well, my parents are DJs, so they played everything. The main genre was house music, tons and tons of Chicago house music. That was the thing. When I was with my grandparents, they would listen to a lot of jazz and soul, like The Temptations.

KAWAII: I don’t think I actually bought the CD, I think my mom got it for me. But it was either the Lil’ Bow Wow or a Lil’ Romeo, it could have been both. They were the bee’s knees back then.

KAWAII: I’ve actually never been to a concert.

KAWAII: Yeah. If I was to say something that’s similar to a concert, then it would be when I performed at SOB’s in New York City. That was the biggest venue that I performed at, so I guess that was kind of like a concert. It was great. I just love connecting with people through music. You can literally meet someone a night after a performance or even at a bar and the right song plays, and you guys can just get into the best conversation. I love what music can do as far as connecting people together like that.

UKIOMOGBE: What would you play for a dinner party?

KAWAII: I would honestly play my songs off of my first album, Zen. It’s more of neo-soul kind of jazzy vibe. Because like I said, I grew up listening to that. Jersey club is my hyper side and then I have the soul, jazzy side. I’d play the original “Energy,” not the club records. I would also play my songs “Bliss” and “Let Me.”

KAWAII: “Deuces” by Chris Brown. That was the anthem. I don’t even think I was in a relationship when that song came out and I still felt like I dumped somebody.

UKIOMOGBE: What about a crying in your bedroom playlist?

KAWAII: Are we crying about breakups or just life? Because it matters. The songs would change.

KAWAII: “Crying Out for Me” by Mario. That’s a classic crying record. You got to put that on at least once. And then I also love “So Sick” by Ne-Yo.

KAWAII: You know? You can’t lose with those. You’re probably going to shed a tear and you might as well just let it happen. I’ll replay those a few times to be honest.

UKIOMOGBE: I don’t know if you smoke, but if you made a high playlist, what would be on it?

KAWAII: Yes, I do smoke. Yes I do. In my high playlist, the first song would probably be “High” by me. I would put that on first because it kind of goes, “I want to get high baby.” And honestly, any Snoop Dogg song. It doesn’t matter. He’s the GOAT. You put Snoop on and just light a fat one and relax. UKIOMOGBE: If you were to pick a couple of songs to play at your funeral, what would you pick?

KAWAII: I’d play “Vibe” by me. I feel like if you play that at my funeral, everyone’s going to either be extremely sad or proceed to throw it back. That’s just what they’re going to do. Especially if I put in my will: “Don’t be sad, just throw it back.” Maybe I should talk to my manager, we need those on shirts. That’s an awesome idea.

UKIOMOGBE: I think that’s a good one right there.

KAWAII: I’m writing it down.

KAWAII: “Don’t Stop Believin'” by Journey. I actually sang that with a bunch of old ladies when I went on vacation in Aruba. There was a karaoke bar and it’s the perfect song. Some people are surprised when I say that one and they’re like, “You know the words to that?” I’m like, “I watch a lot of movies.” Because I’m a movie watcher, you pick up on certain songs because they play them constantly in movies. So that’s just one that I hear a lot in movies that’ll come on and it’ll always be at the right moment.

KAWAII: I won’t say a soundtrack, but there is a song from the first Spider-man movie. It’s called “Hero” by Chad Kroeger [lead vocalist of Nickelback]. I actually just tweeted about it. That’s my song. I feel like I heard that song from the movie and from there it’s just been something that I’ll always go back and play. That’s it right there.

UKIOMOGBE: What’s your favorite theme song from a TV show?

KAWAII: It’s crazy. You’re asking me a whole bunch of stuff that I was literally just tweeting about. Have you guys been watching my Twitter? My favorite theme song is the Hey Arnold theme song. It’s a very jazzy intro. I mean you can listen to it by itself, without watching an episode after, and it’s actually a very good song. I listen to it from time to time.

UKIOMOGBE: If your life was a TV show, what would be your theme song?

UKIOMOGBE: And what song would you use to describe 2020?

KAWAII: Oh wow. Wow. “I Don’t Fuck With You” by Big Sean. 2020, you gotta go. We gotta get out of here. Quarantine and COVID has been so draining and I’m sure it’s been that way for everyone. And now the kids are back on their laptops. I mean, it’s a lot. I definitely don’t fuck with this COVID situation.

UKIOMOGBE: If you were to have dinner with four artists, who would they be? They can be dead or alive.

KAWAII: Whitney Houston, Michael Jackson, Tupac, and Biggie. I watched a lot of Michael Jackson documentaries with my grandmother and watching that kind of stuff puts you in tune with what comes with stardom. It never scared me. It never turned me away. I feel like each and every one of them have a different kind of legacy, but they’ve left so much of an impact. You know what I’m saying? I want that. I want to have that kind of influence. That’s what fuels me because I don’t want to be the typical one hit wonder or whatever. I definitely want to prove myself as a music artist and an overall creator.