From the June 1973 issue of Interview.

That Time When is Interview’s trip through the pop cultural space-time continuum, where we return to some of the most overlooked moments from issues past. In this edition, we revisit our June 1973 column about some overheard “golden gossip” about two of Hollywood’s greatest leading ladies, Marlene Dietrich and Marilyn Monroe.

As a notable admirer of Marilyn Monroe’s, Andy Warhol was sure to get some of the juiciest gossip in his celebrity circle. While he was still Editor-in-Chief of Interview, alongside Paul Morissey and Fred Hughes, he buried a drama bomb of information in the “Small Talk” section of the June 1973 issue involving Marlene Dietrich and M.M herself. However, not one of the contributing editors took credit for the gossip; they instead chose to keep the source anonymous, as if revealing the Kennedy affair.

The starlet of the 1920s silent film scene, who then graduated to sound film with the box office hit The Blue Angel, Marlene Dietrich was never labeled the bombshell that Monroe was. Her flare for androgynous fashion, complete with suit and cigarette (a daring thing for a woman of the 20s) inspired a generation of empowered women and notable drag queen impersonations. While she never fully quit acting, she did pursue cabaret full time, performing for live audiences across the world until her leg broke under her leg—literally. Yet in that blonde gap she left behind, a new, very different kind of leading lady arose in Dietrich’s place.

According to the “Small Talk” column, Dietrich attended a screening of one of Monroe’s earlier films and talked through every one of her scenes, mumbling: “‘So this is what they want now. This is what they call sexy.’”

It’s unclear whether Dietrich was ever able to get over her disapproval, as the two never appeared in a film together.  They met for the first time in 1955 thanks to their mutual friend and photographer, Milton E. Greene, who was starting a production company with Monroe titled Marilyn Monroe Productions, Inc. Greene invited Dietrich to a party celebrating the new company, and she even stopped in long enough to pose for photos with Monroe, fueling rumors of a potential love affair. 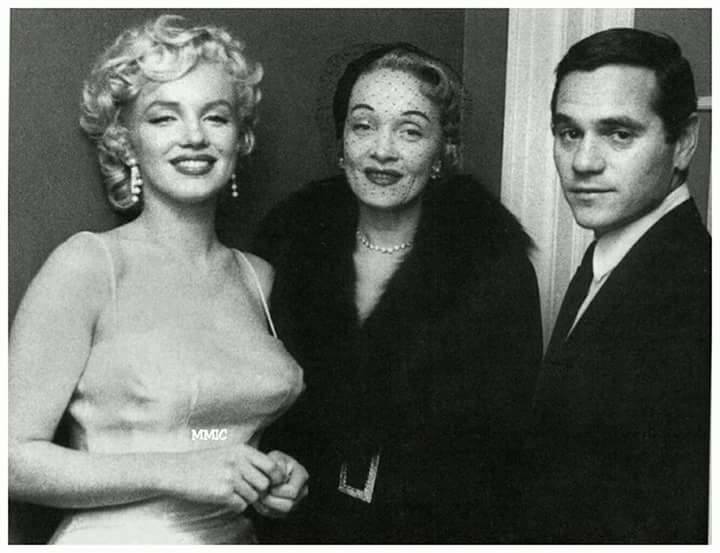 Monroe wrote in her 1954 autobiography My Story that she initially questioned her own sexuality, but came to realize, “Now, having fallen in love, I knew what I was. It wasn’t a lesbian.” Yet that does not disqualify any of her previous relationships with other women, which were outed during the investigation of her death. In a confidential session with her therapist Dr. Ralph Greenson, she told him about a one-night stand with fellow actress Joan Crawford. Dr. Greenson recorded their sessions and turned the tapes over to investigators without knowing that the transcripts would be leaked. Dietrich was similarly outed by two different biographers, Steven Bach and Maria Rivera, who confirmed affairs she had with the singer Edith Piaf and screenwriter Mercedes de Acosta. These revelations sent the media aswirl with theories about the possibility of Dietrich and Monroe forming a romantic interest, yet with no concrete evidence. The rumor remains wishful thinking for many, but who’s to say they were far off? It’s only a thin line between love and hate.