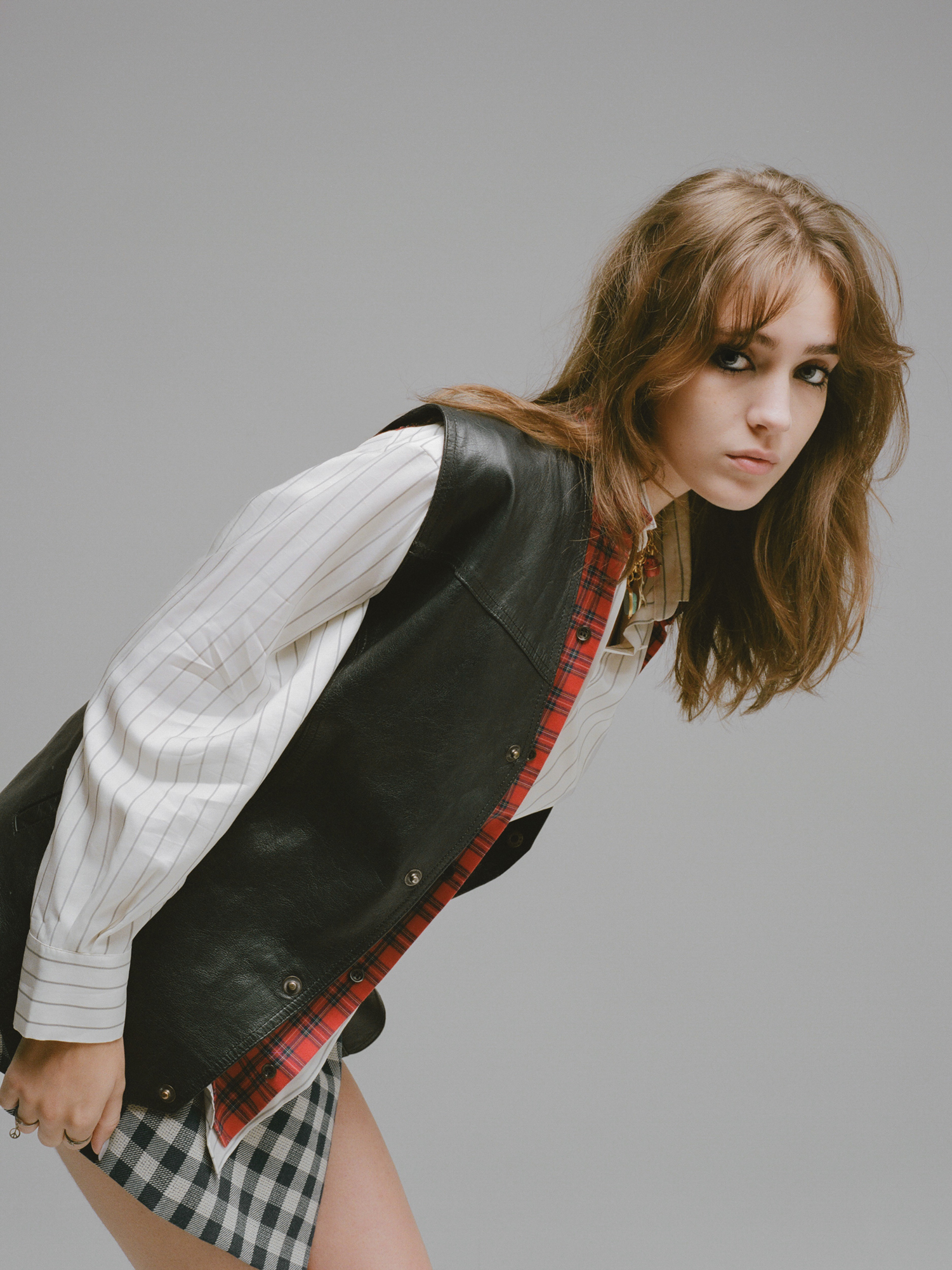 After catching a performance of Matilda the Musical on Broadway at the age of 12, Talia Ryder convinced her mother to let her audition for the show. Already an experienced dancer, she had to improvise the singing and the acting—and yet, she got the part. Now 18, the Buffalo native, whose movie debut came earlier this year in Eliza Hittman’s heralded indie Never Rarely Sometimes Always, will return to her musical roots as a member of the Jets in Steven Spielberg’s adaptation of West Side Story. “I got an email from my agent saying that I needed to bring heels, which I didn’t have, to the audition, so I skipped my last period at school to run to the dance store before making my way to Brooklyn for the audition. I met Steven for the first time at a callback. There he was, sitting at a table at the front of the studio with a huge smile on his face.”

BEN BARNA: How did you discover acting?

TALIA RYDER: I discovered acting through my passion for dance. I was always fascinated by the storytelling aspect of dance and that lead to my pursuit of acting.

BARNA: How did you start acting? What were some of your first performances?

RYDER: After seeing Matilda on Broadway when I was 12, I fell in love with the show and begged my mom to let me audition. Prior to the audition, I had only been a dancer with no on-screen acting experience. During the audition process, I kind of had to ‘wing it’ with singing and acting. I was lucky enough to be cast in the show and after the rigorous rehearsal process, I felt comfortable saying that I was an actor, singer and dancer.

BARNA: What was it like taking Never Rarely Sometimes Always to Sundance? Were there any memorable experiences or moments that stood out?

RYDER: It was a whirlwind of an experience. Before I went people told me that it would be an exhausting experience but I didn’t quite understand what they meant until after. It was a non-stop few days. But amongst all of the craziness of the experience, it was really incredible to see Never Rarely Sometimes Always be received so well by the audiences. Getting to have face to face conversations with people about the film that I worked so hard on was a really rewarding experience. It was also so exciting to have other artists that I admired and looked up to be able to see my work and talk about it with them.

BARNA: What is it like watching the movie for the first time on a big screen with an audience?

RYDER: I was pretty nervous! Performing for a live audience is a completely different experience. Watching yourself and also watching other people watch you is kind of daunting. It was also interesting to see where people laughed and found humor in the piece that I didn’t expect.

BARNA: Was the reaction and reception to the film what you expected, or were you surprised by it?

RYDER: I honestly wasn’t really sure what to expect. Eliza showed me and Sidney [Flanigan] the film once before Sundance and I felt myself getting really emotional at certain points in the film, especially the diner scene at the end. It’s the only time you really get to see the girls being themselves outside of a crisis and the simplicity of that moment, seeing their innocence made me tear up. I saw a lot of people come out of the theater at Sundance and Berlin with wet eyes, too. At both Sundance and Berlin a few women came up to me and shared their stories and their appreciation for the film. It was heartwarming to hear that people found sanctuary in the story.

BARNA: How did you get the role in West Side Story? What was that process like?

RYDER: It was a very long audition process. My first audition was a dance call where Justin Peck taught us a combination from the film. I got an email from my agent saying that I needed to bring heels to the audition, which I didn’t have, so I skipped my last period at school to run to the dance store before making my way to Brooklyn for the audition. There were many rounds of callbacks where we had to sing, do scenes, and of course, dance. While we were given a lot of material and spent a lot of time at the audition studio, the energy there was really heightened and I made a few friends while auditioning.

BARNA: Who do you play in the movie?

RYDER: I’m not allowed to say my character name yet, but I am a member of the Jets.

BARNA: What was it like going from a movie as small as Never Rarely Sometimes Always to West Side Story?

RYDER: Never Rarely Sometimes Always was a much more intimate set than West Side Story. The camera was usually very close to my face and there was usually only one or two other actors on set. There was a huge cast on West Side Story, so set was a very different place. I remember the first day shooting the dance at the gym, I walked onto set and the camera was on a giant crane above our heads. They were very different experiences but the amount of passion and kindness was extremely high on both sets.

BARNA: Both of these films were shot on the streets of NYC, but they couldn’t have been more different. What were some of those differences?

BARNA: What were some of the things that surprised you about being on such a large set?

I guess I never really realized how many people it took to make a movie like West Side Story. Between the creative team, actors, sound, and other crew there were so so many people on set working incredibly hard and approaching their work with such detail. So much goes on behind the camera that I never knew about before filming.

BARNA: What was your first meeting with Steven Spielberg like? Can you describe it, and your mindset going into it?

RYDER: I met Steven for the first time at a dance callback. I didn’t expect him to be there, as it was very early into the process, but Steven was sitting at a table at the front of the studio with a huge smile on his face. He is so positive and encouraging to everyone he encounters. If I knew he was going to be there, I probably would have been a lot more nervous but Steven’s presence is so warm, that I was never intimidated being around him.

BARNA: Was it surreal being directed by Steven Spielberg in just your second movie role? What was it like?

RYDER: Steven is such a huge inspiration to me. He is such a perfectionist and has an impeccable eye for detail. I loved watching him work and getting to see what resonated with him in a take.  But beyond his passion and creativity, he is a really kind human and always took the time to make sure that everyone felt welcome and important on set. Steven created such an approachable environment, I never felt shy asking questions (I had a lot of them), and he made set a really fun place to be. One of our last days shooting the Dance at the Gym, Steven and our amazing producer Kristie brought a Photo Booth to set for the cast to take pictures on. It felt like a real high school dance.

BARNA: What kind of training and rehearsal process did you have to go through before filming?

RYDER: I had about 3 weeks of rehearsal before shooting where we learned choreography and eventually set it in the place that we would film. I was 16 and a junior in high school at the time so on the days we had rehearsal, I would have to go to state-required tutoring for 3 hours a day. It was a busy couple of weeks between studying for exams and learning all of the choreography for the film!

BARNA: What was the most challenging thing about the role?

RYDER: I think the dancing was the most challenging, I had never danced at that level before.