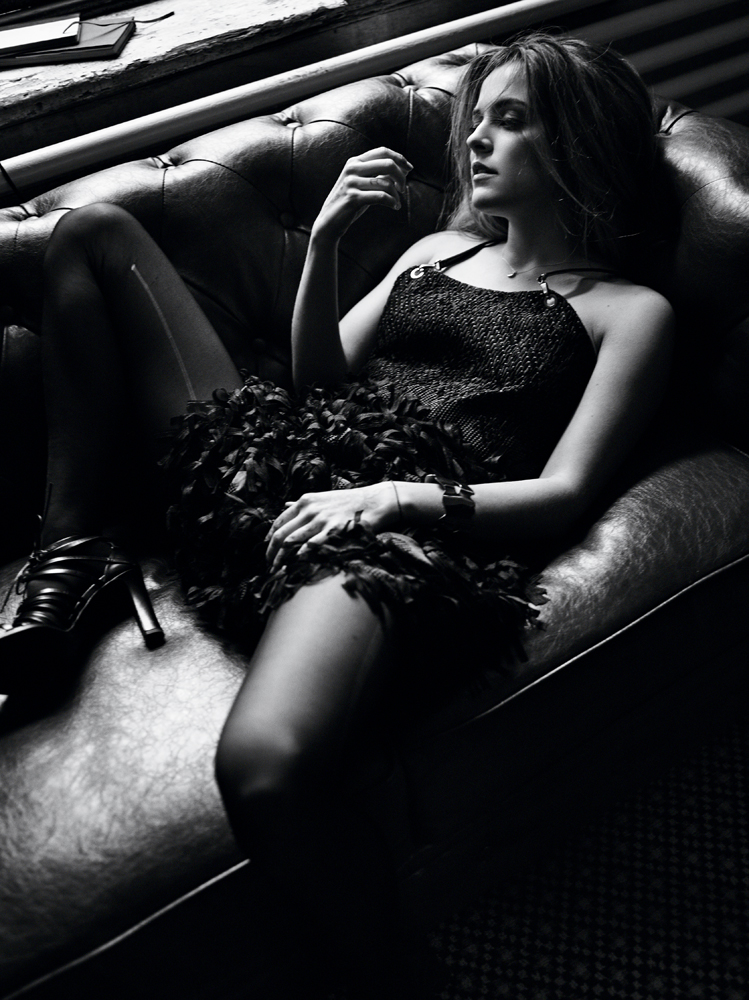 i remember [my parents] saying, ‘Acting is a heartbreaking industry, and we don’t think you should do that.’ So I was like, ‘Yeah, all right, I’ll just be a model then and make some money.’ And they were like, ‘No, no, no, acting is great!’  RILEY KEOUGH

Maybe in Homer’s day, sirens sat around warbling, “a great heap of dead men’s bones lying all around, with the flesh still rotting off them.” But in Steven Soderbergh’s strippingsroman, Magic Mike (2012), actress Riley Keough played trouble-incarnate as a magenta-maned wraith in Florida named Nora. Granted, Alex Pettyfer’s accidental stripper Adam was no Odysseus, but still, Keough’s Nora, never even within screaming distance of sobriety, sang poor Adam to shipwreck on the old shoals of sex and intoxication. Playing, essentially, the fire some of us love to play with, Keough’s seduction warranted the hazard signs you’d find on a gas tank while seeming also to promise entry unto some dark, occult wisdom.

Keough, now 25, the daughter of musician Danny Keough and Lisa Marie Presley (and granddaughter of Elvis), was already comfortable in the spotlight by the time she played Nora. Before landing the role of Marie Currie alongside Kristen Stewart in 2010’s The Runaways, Keough worked as a model, walking for brands like Dolce & Gabbana and popping up in ads for Dior and David Yurman, among others. But Mike and a couple of independent movies later (working with both Xan and Nick Cassavetes, and on an upcoming project with Korean-American filmmaker So Yong Kim), Keough’s career path as an actress appears set. In May she joins an army of other models-slash-actresses, including Charlize Theron, Zoë Kravitz, Rosie Huntington-Whiteley, and Abbey Lee, for the fourth movement of George Miller’s goth apocalypse saga, Mad Max: Fury Road. And later this year, she will star as a New York call girl in the Starz series The Girlfriend Experience, inspired by Soderbergh’s 2009 film. Over a few weeks in December and January, the director and actress traded some barbed, sometimes-silly, sometimes-serious e-mails about heroes, hairstyles, and her favorite flavor.

STEVEN SODERBERGH: Please state, in 25 words or less, why you’re a good candidate for this job.

RILEY KEOUGH: Because I have years of experience in this field of work. And it’s something I’m really passionate about.

SODERBERGH: Have you ever lied to an animal?

KEOUGH: Yes. I’m constantly lying to my dog. He only responds to manipulation and blackmail.

SODERBERGH: Do you think it’s possible to make safety regulations entertaining? If so, how?

KEOUGH: Well, it depends on what kind. I once had a drunk, wobbling flight attendant demonstrate the whole airplane safety rundown—that was entertaining. I have it on video.

SODERBERGH: While we were working on Magic Mike, you didn’t really get a chance to tell me how awesome I was. What have you said about me to your friends and family?

KEOUGH: I tell everyone how gracious and kind and selfless and smart and talented you are. How you have inspired me to be a better human being and also have made me realize I have not reached my full potential as an artist, but also that I shouldn’t expect too much from myself because I will never be you.

SODERBERGH: Imagine how you would have felt if I actually talked to you! What will you absolutely not talk about, ever, to anyone? Be as detailed as possible.

KEOUGH: Probably my death list; it’s a list of people I would make disappear off the planet. Not really kill, more just, like, beam away peacefully.

SODERBERGH: Do you have to know the person for them to be on the list? [Keough refuses to answer] You’ve just won the Oscar for playing a superhero with the ability to become invisible at will. Let me hear your acceptance speech.

KEOUGH: “Hello. [crying] I never thought this was going to happen. I want to thank everyone for believing in me, even though I only have 27,000 Instagram followers. I can’t tell you how emotional it is for me being the first quarter Native American to win an Oscar. The hardest thing I’ve ever had to do in my career wasn’t learning to be invisible, but was learning that I still needed to perform while invisible so that my scene partner could still feel my presence. And that was one of the most profound lessons I’ve learned thus far in my entire life. So really this award goes to (other actor’s name). I want to thank …” Then bust out my prepared list. Then maybe cry a little more at the end, depending on the audience’s vibe.

SODERBERGH: I actually think that would work for any role you win for—it’s a keeper! Would you trade being taller for less IQ?

KEOUGH: No, I think I’m the perfect height. And I have a fairly high IQ.

SODERBERGH: You’re right, for someone of your background, 85 is quite high. I have my own theories about why there is so much conflict in the world, but no one will listen to me. Why didn’t you announce your engagement on live television?

KEOUGH: I was planning on it, but someone leaked it before I could.

SODERBERGH: “Someone?” Hmm. How often do you change your hairstyle, and why?

KEOUGH: Usually for movies, probably every three months. I don’t like being blond, so basically any time I have to dye it blond, I pick a new color after.

SODERBERGH: Is getting free stuff your favorite part of a junket?

KEOUGH: Yes, and talking about myself.

SODERBERGH: Is it weird knowing there is an entire economic ecosystem built on people impersonating your grandfather?

KEOUGH: I’ve never thought about that. That is pretty wild.

SODERBERGH: What’s the difference between being candid and an overshare?

KEOUGH: In general or in interviews? Well, firstly, I find it gross to talk about bodily functions like shitting or farting or your period, if you’re a girl, unless it’s extremely necessary, so that definitely applies to interviews. But at the same time, I’m like, “Why do I care? It’s just a body; they’re all the same. Why are people all weird about nudity and sex and burping and whatever else.” I’m torn. Which I guess brings me to my answer, I don’t know. Gemini.

SODERBERGH: Which of the projects you’re working on will be any good?

KEOUGH: Well, you never know, really. I’ve got Mad Max: Fury Road coming out, which I think looks quite cool. Then I start The Girlfriend Experience, which could be good unless I take up drinking or heroin or something beforehand.

SODERBERGH: I would suggest you save that for the junket. Your relationship with the pig in Magic Mike was very compelling. Do you like bacon?

KEOUGH: I’m glad you thought so after all of those weeks of training with the dramaturge. I do, in fact, like pork, but only sausage, not a big bacon fan.

SODERBERGH: Men have been running shit forever. Do you think women should take over now?

KEOUGH: Nah, I think they should be in the kitchen.

SODERBERGH: Totally agree! So smart you didn’t fall for that trick question! Do you ever think of anyone besides yourself?

SODERBERGH: What won’t you watch?

SODERBERGH: You just can’t afford Cinemax. What won’t you wear?

SODERBERGH: Do you ever have trouble sleeping?

KEOUGH: All the time, but since I quit smoking a while ago, it’s been a lot easier.

SODERBERGH: Do your parents still think you should get a real job?

KEOUGH: They’ve been pretty cool about it, especially since I turned 25 this year. I do remember them having a chat with me when I was, like, 14, saying, “Acting is a heartbreaking industry, and we don’t think you should do that.” So I was like, “Yeah, all right, I’ll just be a model then and make some money.” And they were like, “No, no, no, acting is great!” They were very open to the idea of me doing whatever I wanted to do. I was one of those kids who thought I could be the president of England when I grew up if I wanted to. Then I started acting and realized life is hard and people are mean. And there’s no president of England and I’m not British.

SODERBERGH: Are you afraid of being hacked?

KEOUGH: Nah, I’m prepared, man. I delete all my shit. If anything is ever leaked, it’s from my past, which I have come to terms with already as a possibility.

SODERBERGH: If you had children, would they be as annoying as everyone else’s children?

KEOUGH: They might be, and I wouldn’t know because they’re my children. I’m pretty into good manners, though. I think my kids will be polite.

KEOUGH: Aisle, I have to pee a lot. Wait, I guess that’s an overshare according to me. See, the truth is, Steven, I’m not really sure of anything. I have no personality or opinion on anything. I just sort of float around and lie to my dog.

SODERBERGH: Do you have a turntable?

SODERBERGH: Yes, but not for records—I put my cats on it. Do we need heroes? If so, who are yours?

KEOUGH: I do think we need heroes. It gives people hope and an example to follow. My heroes are people like Gandalf the Grey. And Angelina Jolie.

SODERBERGH: If you were forced to sing a song right now, what would it be?

STEVEN SODERBERGH IS AN ACADEMY AWARD-WINNING DIRECTOR. SEASON TWO OF HIS CINEMAX SERIES THE KNICK WILL PREMIERE LATER THIS YEAR.