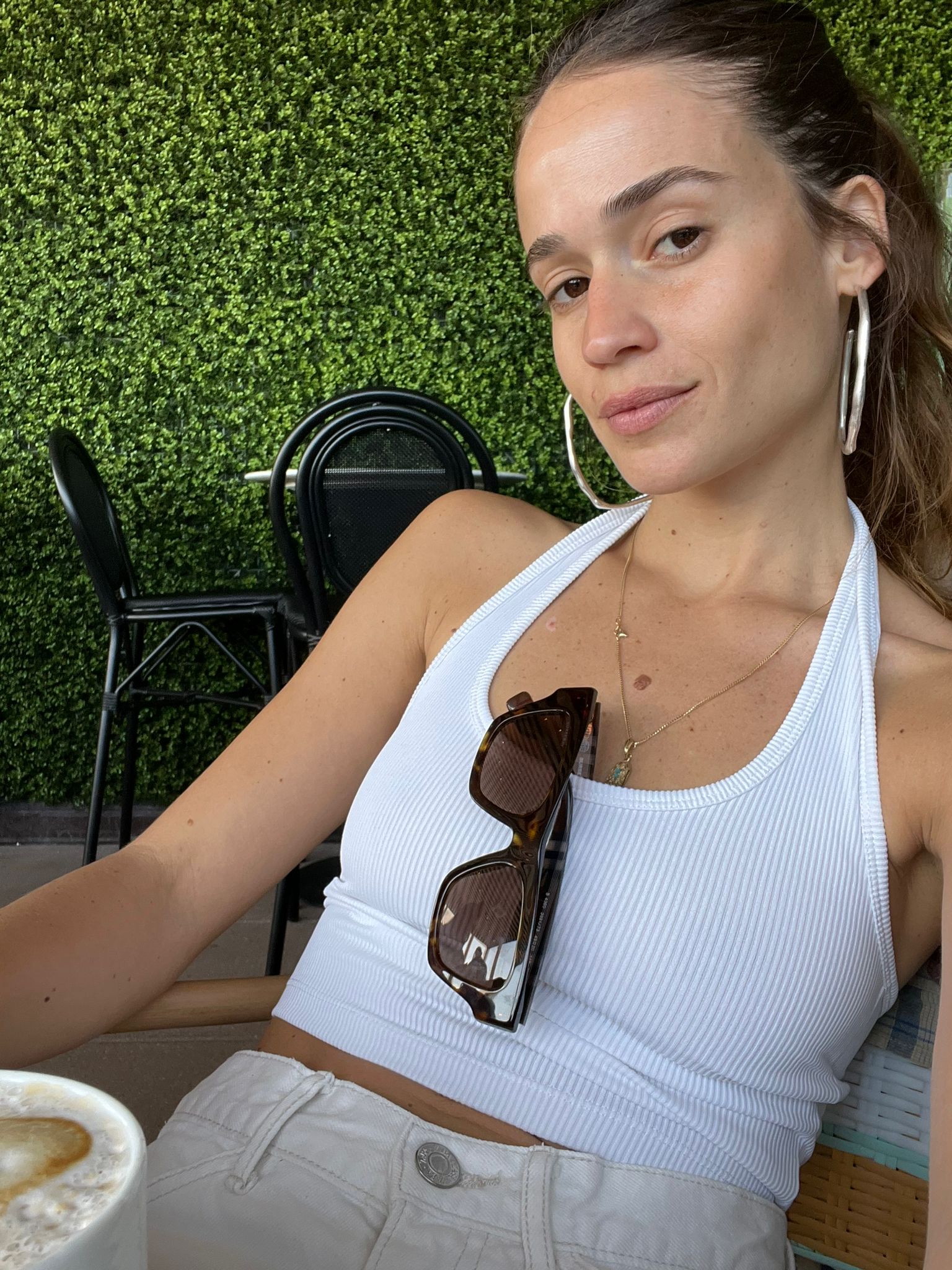 Tehran returned this month for its second season, to the delight of adrenaline junkies the world over. The Isreali spy thriller—which takes place in Iran’s capital city and features dialogue in Hebrew, Farsi, and English—follows Tamar Rabinyan, an Iranian-born Israeli and rookie Mossad agent, as she takes on her first mission. Tehran was also the first major assignment for Niv Sultan, who plays Tamar. Stepping into the mind of a spy required the fledgling actor to dig deep—from intensive training in martial arts to immersive lessons in Farsi—but in some ways, the role hews surprisingly close to Sultan’s own experience. Born in Jerusalem to Moroccan immigrants, the 29-year-old actor is no stranger to the feeling of wanting to make your family proud. But Sultan also discovered a new family on the set of Tehran—one made up of Israelis, Iranians, Greeks, and countless others who breathed life into the Emmy-winning drama. Here, she talks to one member of that family, the legendary Glenn Close, about getting into the mind of an undercover agent, creating art out of conflict, and the thrill of making a groundbreaking show without help from Hollywood.

CLOSE: So wonderful to see you.

SULTAN: You too. I’m so excited to chat.

CLOSE: It’s incredible to have such an intense experience, like we had, and then not see each other for so long. But now I feel like we’re back at it.

SULTAN: It feels like it was yesterday. What an amazing experience.

CLOSE: I’m going to start this by asking you: how did you become Tamar?  How did you get into her character, and what attracted you to her?

SULTAN: It was a crazy process, because the character is so different from me. I had to learn so many things. The biggest challenge was the Farsi. I thought it would be similar to Arabic and learning it would be easy for me, but it’s a completely different language. I had to immerse myself in Iranian culture in order to tell this story. I needed to understand what it means to be Iranian, how rich that culture is. When I met Iranian people on set, I realized they are homesick—they love their culture and miss their country. It was really powerful. I also had to work on my martial arts skills.

CLOSE: Did you learn how to shoot a gun?

SULTAN: I learned how to shoot and fight, it’s very challenging to make that look real. It doesn’t matter how many times you’ve rehearsed the choreography—when you get on set, everything is constantly changing. Suddenly, there’s a couch in the middle of the frame, or a person, and you need to adapt everything you’ve practiced on the spot. It made me feel alive, I loved the action scenes. In a psychological sense, I had to get into the mind of a Mossad agent living undercover, and what it means to sacrifice your life for your country, or for a larger purpose.

CLOSE: Did you use your imagination, or did you talk to people?

SULTAN: Only my imagination. I had no one to talk to, honestly. I don’t think many Mossad agents will tell you those things.

CLOSE: How did you access that side of yourself?

SULTAN: At the heart of it was Tamar’s family, and mine as well.  In the first season, Tamar’s dad is very important to her—my dad was born in Morocco, he’s also an immigrant. I think that immigrants, regardless of where or when, all experience the challenge of finding their place in a foreign society. Tamar has this strong motivation to make her dad proud, and to make him feel part of Israeli society. I have to say, I feel that pressure to succeed in order to make my people and my family proud. That’s what I drew on.

CLOSE:What was the first scene that you and I did together for season two?

SULTAN: We shot at the hospital.

CLOSE: Oh, I forgot about that. I remember that the man who played the Revolutionary Guard was actually a refugee.

SULTAN: That’s a very interesting thing about the show. We shot in Athens, and there are a lot of refugees in Greece. Most of our extras were refugees, and they had crazy stories escaping in search of freedom.

CLOSE: How was your relationship with Danny [Syrkin, Tehran’s director]?

SULTAN: He gave me a lot of freedom. At the beginning, I freaked out because it was too much. I was like, “Talk to me! Tell me what to do!” Eventually he said, “Listen, you are Tamar. At the end of the day, you know what’s good for her.” I realized later what a gift he gave me. I found the confidence to just try things out, knowing that he trusted my instincts.

CLOSE: How did you feel when you learned that Tehran was picked up by Apple TV+?

SULTAN: I freaked out. I’m super grateful for this opportunity, but at the end of the day, I’m mostly happy to know that so many people around the world have been touched by this story. For people to see me speaking Farsi and English with an Israeli accent was a huge thing for me. I’m only at the beginning of my career, so knowing that so many people loved the show is an incredible feeling.

CLOSE: Did you go into this project knowing that it was going to be with Apple?

SULTAN: No, we had no idea what would happen.

SULTAN: We did the first season without a platform. We felt the magic of what we were doing, but you never know. Then, all of a sudden we won Best Drama at the International Emmys.

CLOSE: Tehran is the first Israeli show to win an Emmy, and the first non-English show on Apple TV+. You have pioneered what I think will become the new normal, and I salute you for that.

CLOSE: Why do you think people across the world were so engaged with the first season?

SULTAN: First of all, it’s a very gripping, fun series. Second, we’re telling a timeless story about relationships and challenges. It doesn’t matter where you live, or what conflict is impacting your life. At the end of the day, we all love our families, and we just want to protect our people. I believe that’s something anyone can relate to.

CLOSE: What was it like growing up in a region of great conflict?

SULTAN: Israel, obviously, is full of conflict. There are countless shows, movies, and plays about it. When I read the script, I remember thinking that this show offered a different perspective on the Israeli-Iranian conflict. It wasn’t about politics, it was about humanity. I was also really charmed by the way the show depicts Tehran. I’ve never experienced the magic, music, and beauty of Iranian culture on screen, I only knew what I’d read in headlines and newspapers. I was really proud to be part of the show.

CLOSE: What is Tamar’s journey from season one to season two?

SULTAN: In season two, Tamar is very good at pushing her feelings aside. She was trained for that, but in season two we find her really emotionally involved. That’s a bad thing for an agent because there’s so much at stake.

CLOSE: What do you think makes Tehran especially unique?

SULTAN: I think the beauty of Iranian culture hasn’t really been explored on screen at this scale before. It’s not about governments, it’s about people. The conflict exists between governments, but real people of Iran and Israel don’t live the conflict, we live our lives. The series shows us that a connection can exist between Iranian men and Israeli women [Tamar and Milad]. I think it’s a very interesting point of view. It’s also a very underground series, in a way. There’s something edgy, dark, and imperfect about it, which I love. It’s different—organic, authentic, not American.

CLOSE: That’s one of the things that attracted me to it. The cast and crew were not speaking English. What kind of project would you like to take on next?

SULTAN: I’m only at the beginning, so I want everything. I want to keep playing characters that challenge me and refine my skills.

CLOSE: We’re very lucky to do what we do.

SULTAN: I have to tell you that before you arrived, the Israeli crew were really nervous. They didn’t know how to react to you, and everyone was whispering. But you arrived with this cheerful energy. I don’t know if you remember, but one day, in between takes, you were walking around singing. After that, everyone relaxed. It was very warm, we became a family on set.