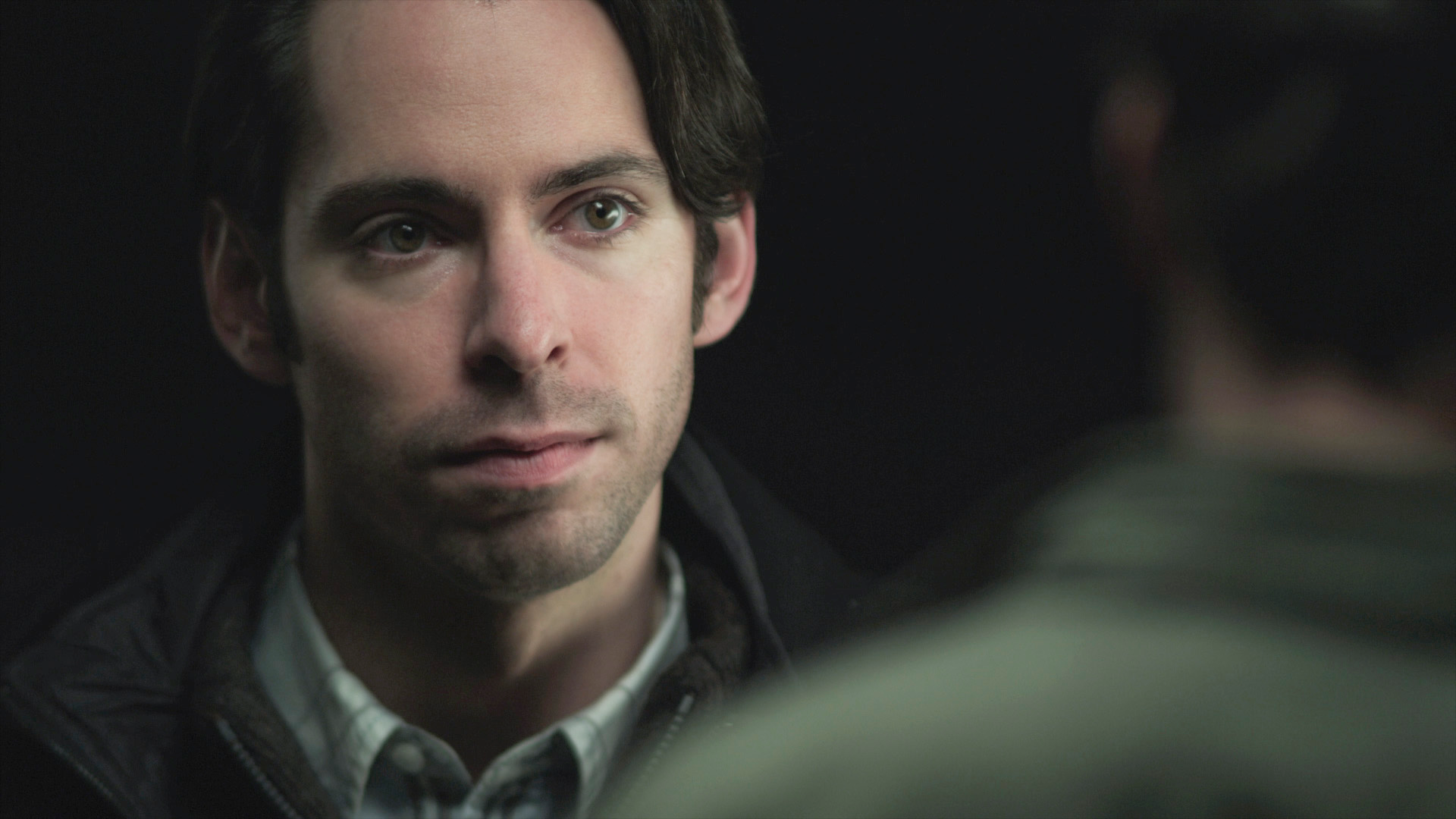 ABOVE: MARTIN STARR AS ALAN IN 6 MONTH RULE.

As Bill Haverchuck, Martin Starr was perhaps the most endearing character on Freaks and Geeks, Judd Apatow and Paul Feig’s oft-cited 1999 TV show. It is rather unfair, however, to introduce Martin Starr by referencing a character he played nearly 15 years ago, when he was only 17. While anyone who watched Freaks will find it hard to shake their soft spot for Starr-as-Haverchuck, the gangly, awkward, hilarious and deadpan geek, Starr’s since starred in Party Down, Adventureland, and Adult Swim’s purposefully silly NCIS:SD:SUV, and popped up everywhere from Superbad and Knocked Up, to New Girl, Community, and the Beastie Boys’ Fight For Your Right Revisited. Here, Interview catches up with Starr about his two new films—6 Month Rule and Save the Date with Alison Brie—nudity, money-grubbing, and the likelihood of a Party Down movie.

EMMA BROWN: I just saw Save the Date and 6 Month Rule. I was sort of expecting Save the Date to be a straight-up comedy, there are so many funny people in it, but it was alarmingly frank and consequently made me somewhat uncomfortable. Can you tell me a little about it?

MARTIN STARR: I found a lot of people would relate it to Bridesmaids, because it’s a woman-led romantic comedy, and that was the most recent successful [one]. [Bridesmaids] is a great movie, but there’s no correlation between the two. It’s just a different tone altogether, a different trajectory for the story.

I had a random meeting with Michael Mohan, who did the last draft of, and directed, Save the Date. He had an affinity for me as that character as he was rewriting the script. I couldn’t tell at first if we were on the same page by the way he was talking about the meetings he had set up for the next week, I didn’t really see those people in the movie and the tone. I didn’t know if we were seeing the same script, or the same story, or the same end goal. A week and a half later, he emailed me and said “Oh, I just met with Lizzy Caplan, love her. I think she’s interested, fingers crossed.” Then a couple days later the same message about Geoffrey Arend and then about Mark [Webber]. The way it was coming together it just seemed, “This is exactly how I saw it, these are the kind of people that I think could really bring the story to life.”

BROWN: When he mentioned all of these names to you, did you call them up and try to convince them to get on board?

STARR: Not really. I think I just let things play out. Lizzy and I communicated a little, but I think things just tend to fall into place… if you let them. It’s a very broad statement. [laughs]

BROWN: Your answer to everything?

STARR: [laughs] Yes, that’s my go-to, my motto. Now you know me, I think this interview is pretty much over.

BROWN: If someone tells you that they wrote a role with you in mind, is your reaction, “Oh, that’s how you see me?”

STARR: No. Generally I expect there to be a lot of nudity if that’s the case, just ’cause I imagine that everyone thinks of me naked.

STARR: Don’t burst my bubble, Emma. I’m a nudist by trade and hobby. I grew up in LA and I’ve been fortunate enough to be doing this for a great deal of years; if someone is thinking of me as they’re writing something I take it as a huge compliment and hope that it’s an interesting character at least. But I don’t ever assume that that is how they see me necessarily. It’s always a fictional story, Emma. [laughs]

BROWN: How did you become involved?

STARR: Paul Scheer, the creator, said “I think we have the opportunity to do this show and I was just wondering if you wanted to come and do it?” I said “Yes.” It was literally that simple. [laughs] It’s just a fun parody of all those procedural shows. It’s a great group of people.

BROWN: Do your agent, manager, publicist, etc. get upset when you agree to things without consulting them first?

STARR: No… my manager makes fun of me for the fact that I avoid the money, I’m allergic to money, because the choices that I make usually concern the people and the project itself, rather than the financial gain that is projected. I have the reputation for being the opposite of a money-grubber.

STARR: [laughs] I guess so. But I’m very happy, I’ve no complaints.

BROWN: Do you improvise frequently on NTSF:SD:SUV?

STARR: We tend to improvise, but it’s usually written pretty on point, the jokes are there. But pretty much everything I do, I tend to improvise. Save the Date was a little bit of improvisation, but a different kind I suppose, the end purpose wasn’t to make jokes.

BROWN: Would you ever want to write your own series or film?

STARR: Yes, I wrote a show this past year for ABC, it didn’t get picked up. The year before that Eugene Levy and I both worked with a writer and wrote a show for CBS. I’ve been writing movie scripts, but it’s a difficult process.

BROWN: And your next film coming out is 6 Month Rule?

STARR: Yeah. That movie just came out of the woodwork, I guess two years ago. I was offered the part, but they were like, “We’ll need to know soon because you’d have to fly out to Freeport, Louisiana next week.” I read it and there were a few moments in the script that scared me as far as bringing them to life, so that made me really intrigued to do it. I talked to Blayne Weaver, who directed it, and he made me feel at ease about being a part of it.

BROWN: You seem to be having lots of good experiences.

STARR: Well I’ve been doing this for almost 15 years, so hopefully by now I have some understanding of what I’m doing this for and how to make sure that my needs are met. Life is too short to torture yourself for no reason. I’ve had unsatisfying experiences, but mostly it’s about communication, which is why I make an effort to talk to the director beforehand to make sure we see eye-to-eye as creative individuals. If [good] communication isn’t present, you can lose something and end up very unhappy.

BROWN: There are lots of directors that have a reputation for being very difficult but make excellent films—Lars Von Trier, for example, would you avoid working with someone like him?

STARR: I would certainly want to open a dialogue to see if it is something I’d be comfortable with, but I take it person to person. Respect is important, if someone has a very clear vision of what they want, as long as they find a way to communicate it, a respectful way… But he certainly knows how to make a movie, that guy.

BROWN: Where would you like to be in five years?

STARR: There’s a movie I want to make in five years, so I’d like to be in pre-production on that.

BROWN: Is it a secret, or can you tell me about it?

STARR: It’s not a secret, it’s just a movie that would require me to be of age and have kids. I decided in my mind a long time ago that my goal was to make it when I’m 35. [Other] than that, I’d like to have a nice home set up, with a couple of dogs, and a fence, white picket fence.

BROWN: Out of all the things you’ve done, do people approach you most frequently about Freaks and Geeks?

STARR: I don’t know. These days, I feel like Party Down is growing and growing as this underground success.

BROWN: Is there going to be a film?

STARR: That is what I am hoping for; it would be a dream come true for me. I don’t know if “in the works” is the right way to put it, because I don’t believe it’s actually happening until I get an offer, but there are actions being taken.

BROWN: Is there someone to whom I should start a letter campaign? I’ll inundate them.

STARR:  [laughs] I don’t think it’s about letters at this point. Initially, in my opinion, there was a hope to find another network to take us on and allow further growth of the show, [but] that wasn’t being allowed by the network. Now, as far as I understand, we have their approval if we can get a movie off the ground. Letters aren’t really necessary, it’s about finding the right people to produce and fund the movie.

BROWN: Not as popular as they were in the States, but I remember hearing “Gravel Pit” a lot. Apparently they’re making a movie about ODB’s life.

STARR: I did hear that. Did you start the letter campaign?

BROWN: Yes. What question do you get asked most frequently in interviews?

STARR: I have the memory of a goldfish. [laughs] When you do a press junket, they kind of all have three questions that are exactly the same and they all start out with them—”What’s your character? What’s the story? What was it like to work with so-and-so?” You’d think they’d just put out a press release. I talked to a New Zealand magazine a while ago and told them I wanted to do interviews for them, to interview some of my friends.

BROWN: You should do that for us! That’s what we do. Whom would you like to interview?

BROWN: What would be your first question?

STARR: My first question would be: “Why is there a peculiar density to your flatulence, and why does it smell as badly as it does?” No, that wouldn’t be my first question. That would come late in the interview. What would be your first question? To, say, Martin Starr were you to interview him?

BROWN: I think it was less of a question and more of a sentence, in the hopes that you would start talking to me and I would not have to verbally prod you.

BROWN: What’s the last thing that frightened you?

BROWN: No, that works. Did you jump up and scream?

STARR: No, but my body went into a very brief paralysis.

BROWN: Did you hit him and ask him why he would do such a thing?

STARR: [laughs] No, but I have a feeling that’s what you would do. I’m not that vengeful a person; I’ve worked through my issues.