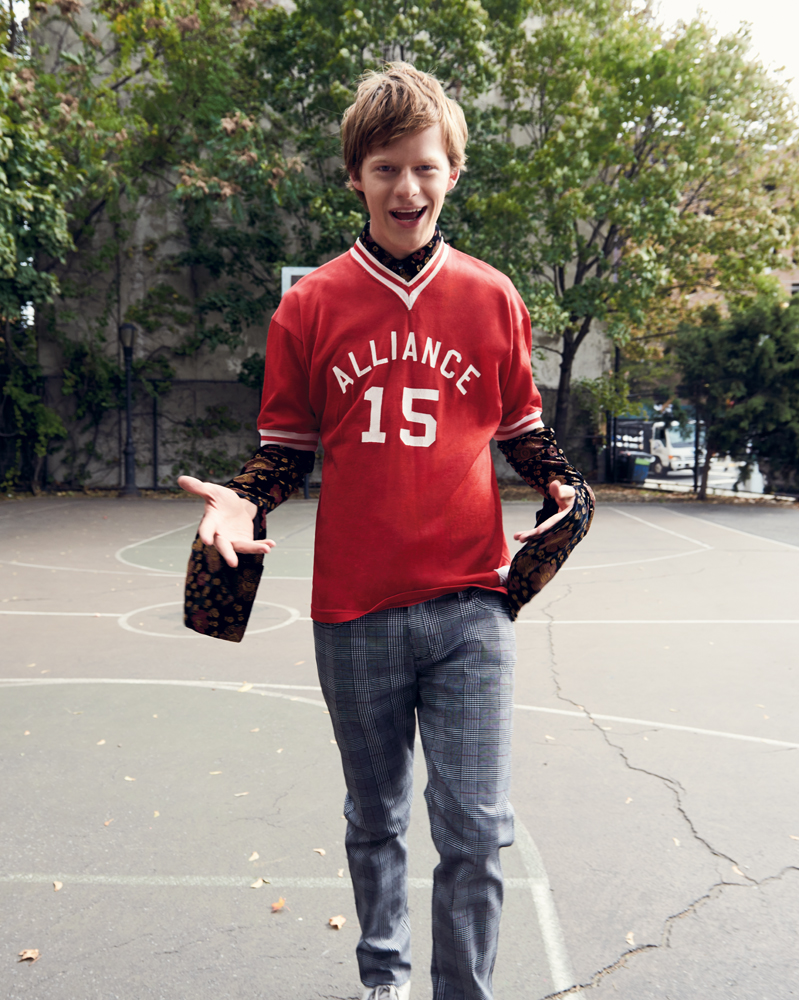 “I think I was born to be a clown,” says 20-year-old actor Lucas Hedges. “I just haven’t figured out how to bring that side of myself into the world of filmmaking. It’s much more comfortable for me to cry on a film set than it is to tell a joke.” The Brooklyn native has certainly had the opportunity to show off his melancholic side. This winter he stars in Manchester by the Sea, a quietly intense drama by the filmmaking playwright Kenneth Lonergan (of You Can Count on Me). He plays Patrick, an emotionally shut-down teenager whose father dies, leaving him in the uneasy care of his reluctant uncle (Casey Affleck). It’s a gutsy performance that Hedges occupies with natural ease. “What’s happened to Patrick has happened to me, but on a smaller scale,” Hedges says. “I relate to feeling unlovable and that I have to do things in order to feel safe and not panic. I’ve not known how to deal with things, pushed them aside, and broken down because of those emotions.”

The son of playwright and director Peter Hedges, the young actor recalls knowing Lonergan “from the time I was in a stroller.” “Kenneth didn’t cast me because I was the person most like the character—I don’t really look anything like Casey Affleck,” he says. “He told me that he cast the kid he wanted to watch most in a two-hour movie.” Hedges’s first big break occurred not due to family connections, but when a casting director spotted him in a junior-high play (he went on to land a part in Wes Anderson’s 2012 film Moonrise Kingdom). Coincidently, Hedges is set to appear in first-time director Greta Gerwig’s upcoming romp, Lady Bird, about high school musical-theater kids (“The most fun I’ve ever had doing a movie,” he swears. “I’ve never worked with a director who was so excitable”). He will also appear as the son of Frances McDormand’s character in the “very dark comedy” Three Billboards Outside Ebbing, Missouri, about a woman avenging a family murder. On top of that, this January he will make his stage debut in the Off-Broadway play Yen.

This string of projects has led him to take a year off from the acting conservatory in North Carolina he was attending. His good fortune to work with some of the most respected directors is not lost on him. “It does a lot to my head,” he says. “I go through a period of feeling like I’ve disappointed them and I’m undeserving. It’s nauseating for me when I feel like I’m not growing or challenging myself.”