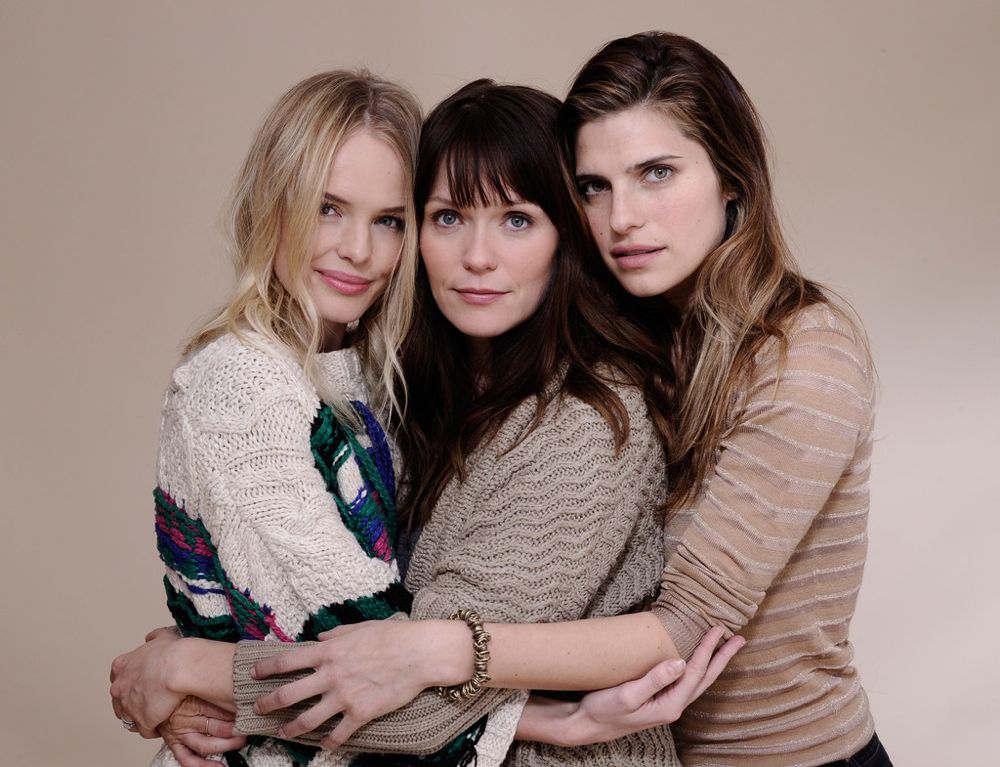 ABOVE: (LEFT TO RIGHT) KATE BOSWORTH, KATIE ASELTON, AND LAKE BELL AT SUNDANCE IN 2012.

Don’t go into the woods. As any steadfast urban dweller will tell you, bad things can happen when you leave the city to interact with nature. Some of our most terrifying nightmares revolve around tics, spiders, dirt, mud, and no cell-phone service. If we’re feeling particularly imaginative, there might be a hungry grizzly bears or a rabid skunk.

In her second film as a director and actor, Katie Aselton takes things a little further. Three childhood friends—Abby (Aselton), Sarah (Kate Bosworth), and Lou (Lake Bell)—decide to spend a night camping on a small, familiar island off the coast of Maine, Black Rock. Things do not begin well; Abby and Lou are not on speaking terms. Much to Sarah’s dismay, they are not ready to make up. When the three women run into another childhood acquaintance, a dishonorably discharged soldier named Henry, however, their problems become much more basic than who is being selfish and stubborn. Things quickly devolve into primal, gender-segregated, hunt-or-be-hunted torment.

Since filming Black Rock, actress Lake Bell has finished her first feature as a writer and director, In a World…, due out this year. Here Bell discusses how she found herself crawling through the Maine woods voluntarily and whether her second career as a director affects her attitude as an actor.

EMMA BROWN: How did you first meet Katie Aselton?

LAKE BELL: I think we first met in the Nantucket film festival a very long time ago; I was still on Boston Legal at the time. Several years passed and we started being in similar social groups and seeing each other at parties and just being a part of a particular comedy community. I remember she asked me one night at the Soho House—it was a very glamorous evening, not normal for us—she asked me if I wanted to be a part of this movie and then cut to being in the mud, naked, cold, and almost dying in Maine. [laughs]

BROWN: When did she break the “Oh, we’ll be sharpening spears made of sticks naked in the woods together,” bit?

BELL: Well, I’d read the script, and I was totally exhilarated. It’s very rare, certainly at that juncture, to be offered a part like that and to work with a team of people that are like-minded and very cool. When you make a movie, you’re spending a month of your life with someone and, down the line, you have to spend more months with them. It is this mini-marriage that you have. I can’t think of a better group of people to be married to. The only people who could have done this movie are people who are game to play and not squeamish about worms and spiders and mud and freezing cold water. I mean, I almost died, but that’s a separate issue.

BELL: Oh yeah. The water is like 42 degrees and then the outside temperature is like 40 degrees. It’s a long story, but the point is I might have gotten a asthma panic attack in the ice cold waters of the Atlantic at night and it was very scary.

BROWN: Was it during the summer, at least?

BELL: It’s June, but I don’t know if you know Maine at all, if you go deep in the ocean it’s 42 degrees. It’s absurd. It’s not okay. It’s dire. There’s a line in the movie where Kate Bosworth says, “Are you crazy? We can’t go in that water! Even in August, if you’re in that water more than 15 minutes you get hypothermia and you die.” And that’s actually just a fact, that’s just true. So shooting in there was very dangerous and you can feel it. We definitely felt mortal.

BROWN: Had you been in the Maine water before shooting the film?

BELL: I did. I went to summer camp up in Maine and we had to do that silly thing when I was nine to prove that you could fall off a sailboat. You have to take the water test, which is a horrible endeavor. You have to jump into the water by the dock and put your two index fingers up as your body treads water for two minutes. I think that’s all they made us endure because it is so tremendously cold. It was horrible. My brain went numb.

BROWN: So did you have that memory in mind when you agreed to make the movie, or had you forgotten about it?

BELL: I think when you’re younger, you’re more resilient. I had remembered it being pretty horrible, but I was like, Maybe now that I’m older I’ll be able to stomach it a bit better. I just remember putting my toe in that water and I thinking, I don’t think this is going to end well.

BROWN: Did you have nicknames to distinguish between Katie and Kate?

BELL:  [laughs] You go by the last name. Aselton and Bos.

BROWN: The majority of the movie is so tense; what happened in between scenes? Did you try to maintain distance between the boys and the girls, or did you crack jokes to break the tension?

BELL: We shot everything chronologically, so each dark moment was on the slate, on the schedule, and we built towards those moments. We were ready, emotionally, for all of them. We started at a place of levity—the movie does start with this sort of talky-talky girls’ relationship movie and it takes a vast curve into darkness very quickly. Every milestone and every moment in the film where the stakes get higher and higher, and the girls become more animalistic and the men become more hunters—I think we were really ready for and prepared us for the next moment. By the time we were naked, we were already feeling very vulnerable and raw and scared. By the time we were kicking ass and doing that fight scene with Jay Paulson, we had been prepped. We had been emotionally on this shoot and we were tired and we were exhausted, but we were motivated to kick some ass.

BROWN: Abby and Lou had a falling out several years before the film takes place, and over the course of the movie, we realize what happened between them. Do you think Abby should forgive Lou for her transgression?

BELL: I mean, no, not at all. People do horrible things when they’re young. There might be betrayal and there might be things that should be forgotten, but those are all questions that are for the first half of the movie. The very extraordinary circumstances [that] come upon them in the movie illustrates how all of those things are in the past; they’re things that we hold onto [but] they’re just really irrelevant because now it’s [about] who wants to live more. Who has the will to fight for their life more.

BROWN: What’s the most difficult thing about acting and directing simultaneously?

BELL: The most difficult thing about acting and directing in a film is acting and directing in a film. Every ounce of your physical and emotional being, and your analytical and thoughtful and producorial being, is being exercised at all points. You are 100% working on overdrive, but because it is only for X amount of days, if you have the stomach for it, you hustle through. It’s a massive undertaking, and I think preparation is the key to success for that endeavor.

BROWN: Is it hard to not to backseat direct once you’ve gone through the experience yourself?

BROWN: Last question: what’s the best cure for the blues, in your opinion?

BELL: What’s the best cure for the blues? [laughs] Shit, there’s a lot of stuff I could say. I’m a music person. Music is, for me, the best way to cure any sort of anxiety or icky feelings. I think it immediately takes you out of your element and makes some other person do the work for your thoughts.

BROWN: Do you have a go-to artist for when you’re feeling upset?

BELL: I happen to be a fan of funk. I mean, Sly traditionally does it for me. Rufus and Carla, Bloodstone, Isley Brothers—that kind of shit.

BLACK ROCK COMES OUT FRIDAY, MAY 17.