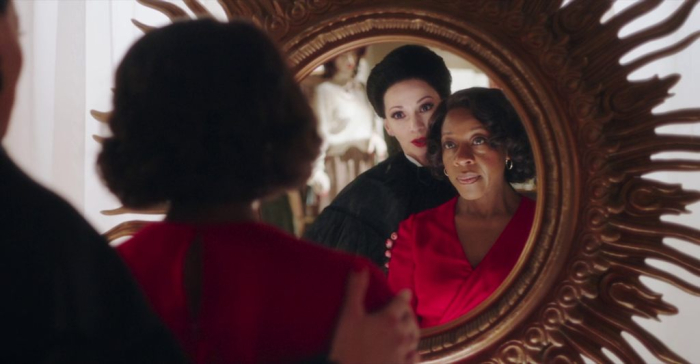 Peter Strickland is a British filmmaker who has become increasingly known for his ventures into the realm of the eerie, from his 2012 breakout hit Berberian Sound Studio to its follow-up, The Duke of Burgundy, in 2014. In his latest film, In Fabric, Strickland has taken his penchant for the totally weird to paranormal new heights. From outlandish department store brawls to demonic washing machines, it’s safe to say this film has something for everyone. (Or at least, a certain kind of everyone.)

In Fabric chronicles the harrowing consequences of consumerism on a chain of particularly unlucky individuals who happen to come into possession of a seemingly cursed red dress. It’s a sardonic take on the sartorial, a wry horror flick that wears its giallo influence on its bloodied couture sleeve. The genre is known for its tendency to flirt with camp; that being said, at the film’s roughest moments, one might sense that the film brushes a hair too far, plunging into downright silliness.

Fatma Mohamed, a Strickland mainstay, gives a deeply committed performance—arguably the film’s best—as Miss Luckmoore, a ridiculously verbose androgyne ghoul who works as a sales assistant at Dentley and Soper’s, a popular department store run by conspicuously pervy goth weirdos who use the business as a secret front for vaguely sinister black magic schemes. Imagine an inverted Hot Topic for middle-class mothers, peddling Satan-tainted evening wear instead of pop-punk band merch. At Dentley and Soper’s, you can buy, the film wants us to believe, a fetching—albeit semi-sentient and bloodthirsty—outfit for a classy date, although in my own opinion the villainous garment gives off more of a “moth-bitten remnant of an antique store” vibe than the haunting crimson coat featured in Nicholas Roeg’s staggering vision of grief, Don’t Look Now.

While Strickland might not have the makings of a Project Runway finalist, he certainly knows how to craft a proudly batshit genre film. Visually arresting and undeniably unique, In Fabric wraps you in an unsettling cautionary tale of materialism’s violence.