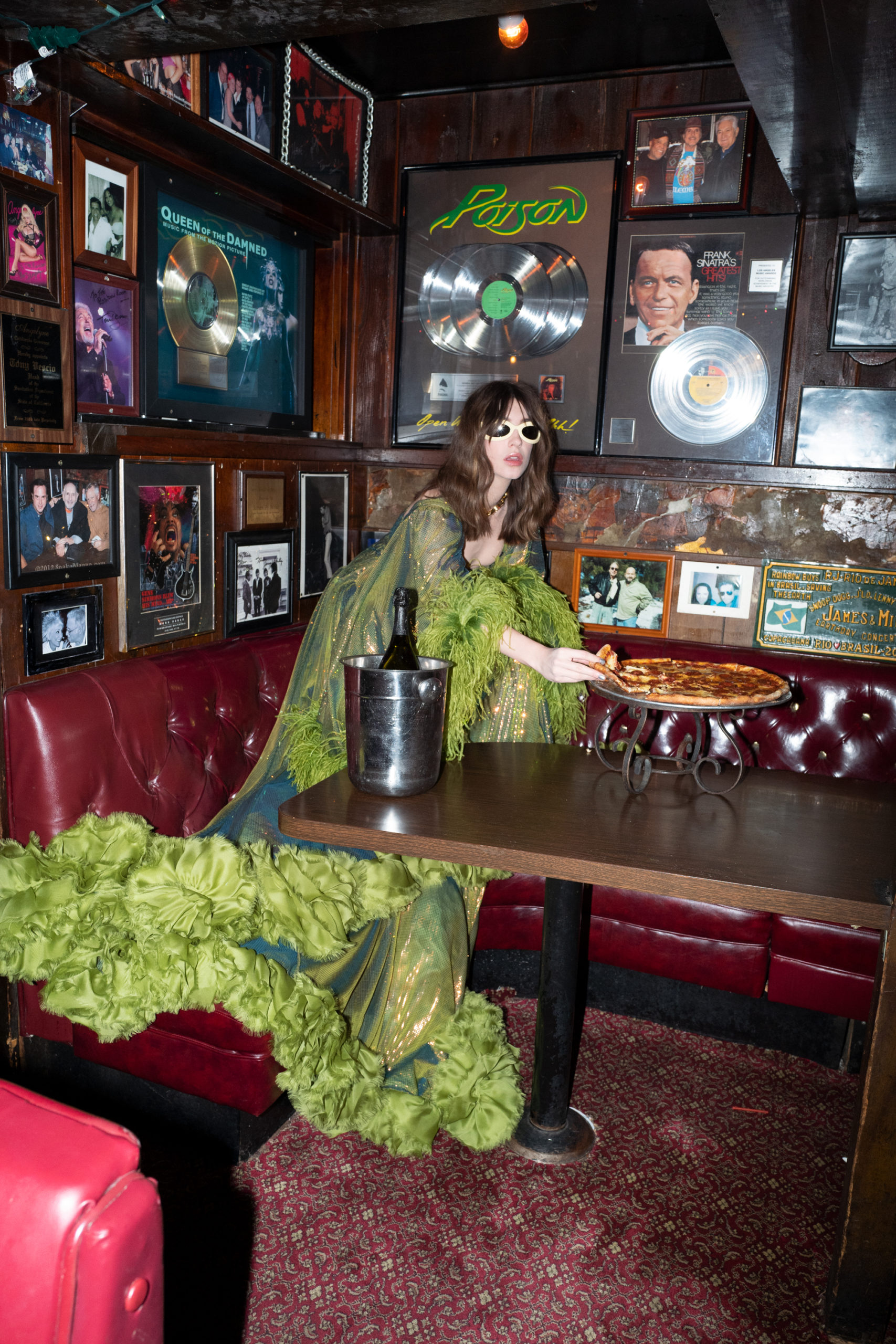 All Clothing and Accessories (worn throughout) by Gucci.

It’s been two years since Normal People made Daisy Edgar-Jones a star. Her achingly naturalistic performance as Marianne Sheridan in the television version of Sally Rooney’s best seller captivated audiences, and launched a career that is now coming into view. This year, the 23-year-old Brit puts her talent on full display with starring roles in a cannibalistic rom-com (Fresh), a Mormon murder mystery (Under the Banner of Heaven), and the latest product of Reese Witherspoon’s adaptation factory (Where the Crawdads Sing). As busy as she is, Edgar-Jones still had time to chat with her friend, musician Phoebe Bridgers, about impostor syndrome, eating on-screen, and creative turnoffs. —BEN BARNA

PHOEBE BRIDGERS: How’s it going, dude? Where are you in the world?

BRIDGERS: I just watched Fresh. I knew what it was about and it still scared the shit out of me (1).

BRIDGERS: It’s so, so good. I love when there’s acting in a movie that has to fool both the audience and another character, like in Mulholland Drive, but I don’t want to give too much away. When you read a script, is there usually a scene that makes you super nervous?

EDGAR-JONES: A hundred percent. In every job, there’s that one scene you know is coming. Usually, they put it right at the end of the schedule, and at the end of the day. You know it’s coming, and you’re like, “I just want to get this scene over with.” I definitely had that with Fresh. I’ve had that with pretty much everything I’ve done. With Fresh, the scene post-credits, it goes to such a crazy place.

BRIDGERS: Do the scenes that make you nervous have a common theme? Or is it just a heavy, emotional scene every time?

EDGAR-JONES: It’s also when you really love a scene. In Normal People, there was a scene where I didn’t realize how much it meant to me until we started filming it. It’s the scene with Marianne and Connell, where he comes back and he’s got a bloodied nose, and she’s with Jamie at that point, and they have a conversation in the kitchen. I loved that scene so much in the book, so when it came to filming it, I was like, “Oh, my gosh, I’m really nervous.”

BRIDGERS: Sometimes the super emotional scenes aren’t the most challenging, it’s the subtleties. Especially with a character like Marianne. How can you get betrayal, keeping it cool, love, all that shit on your face at once without saying fucking anything ever? That character just won’t communicate.

EDGAR-JONES: We both just emote at each other the whole time, silently. It’s so crazy. [Laughs] It’s kind of how real life is. So much of Marianne in the latter part of that series is numb as well. Trying to play active numbness is quite hard.

BRIDGERS: Totally. Okay this is a fun question. What’s the weirdest thing you’ve ever eaten on set?

EDGAR-JONES: One of the worst things I’ve eaten was actually for Fresh, but it wasn’t the meal you’d think. There’s a scene where Jojo (Jonica T. Gibbs) and I are having a casual chat, eating a breakfast burrito, but the flippy egg—we had to eat that flippy moist egg so many times, even now it makes me feel sick.

BRIDGERS: Have you ever had to utilize a spit bucket?

EDGAR-JONES: You know, I never have, but I do really enjoy watching actors successfully not eat. They’re always just about to eat, and then they’ll say their dialogue. I love watching a fork almost get to the mouth. BRIDGERS: In Chinatown, when they’re in Catalina, I don’t think Jack Nicholson takes a single bite. He just keeps chopping it into tinier and tinier pieces.

EDGAR-JONES: It’s so funny. But then some people really just chow down. That’s impressive. It’s the most truthful thing you can see on-screen. That person’s actually eating and digesting that food.

BRIDGERS: What’s a creative turnoff for you? Even when you watch stuff? In music, I always call it like pumping the brakes. Like if someone pronounces guitar, “GUI-tar.”

EDGAR-JONES: That’s a really good question. I think it’s intimate scenes—you know, that old ’80s thing, like, with the billowing sheets and the soft lighting and the candles?

EDGAR-JONES: [Laughs] Yes, that kind of thing. Even in Titanic with the hand. And also the obviousness of some dialogue, like, “There has to be another way,” or, “How could you do this?” That pumps the brakes for me because I’ve had to do lines like that, and sometimes it’s so hard, because you’re like, “How the hell do I make this not like every other line?”

BRIDGERS: For sure. What do the characters that you’ve chosen so far have in common? What do you look for when you’re picking a role?

EDGAR-JONES: My hope is that they’re all quite different. What I liked about Noa [in Fresh], for example, was that she was allowed to be funny at times. She had wit, a dry sense of humor, and a very different accent. And then similarity-wise, I feel like they’re all quite complicated. They all appear to be one thing, and then are actually something else. For example, Marianne, when we first meet her, she appears to be very spiky and sure of herself, but actually she’s deeply vulnerable and completely insecure. And Noa is quite unassuming and underestimated, and then she finds this inner strength. I guess all my characters are underestimated and grow and change.

BRIDGERS: Yeah. I feel like Noa’s deceptively internal. In the beginning, she was just pouring all this shit out, and she’s super open. And then in the second half of the movie, you have no idea what’s going on inside her head.

BRIDGERS: This says a lot more about me than it will about you. When I was a kid, I went to a Kelly Clarkson concert and I was positive that she was going to look out into the audience and be like, “Is there a singer here?” And be like, “You, kid. Get up here.” I was positive that I was, like, the second coming of Bob Dylan. Are you living out a childhood dream?

EDGAR-JONES: I love that so much. I used to have fantasies like that, too. I dreamed so much of being able to have this career. It’s really funny too, because I suffer quite badly from impostor syndrome. Sometimes when I’m auditioning for stuff I’m like, “I’m going to get this. I’m perfect for this part.” But then when I get the part, halfway through it I’m like, “Why the fuck did they pick me?”

BRIDGERS: Are you saying that the impostor syndrome gets worse halfway through a job?

EDGAR-JONES: It ebbs and flows. Maybe it’s hormonal. I don’t know. It’s improving, actually, which is nice. I’m starting to get less in my head. The whole point of being a good actor is to listen and to be present. When you’re too busy worrying about whether what you’re doing is any good, then you’re not going to be any good. I think it’s just the nature of being an actor. Because you’re quite vulnerable sometimes in front of the camera. And if you get it wrong it’s there forever. I’ll always have that kind of worry. And hopefully I do, because it means that I always want to get it right.

BRIDGERS: Totally. Something surprising I learned talking to more and more actors is that great actors make you better.

EDGAR-JONES: Oh, completely. It’s great because then you can actually react. I think you’re only as good as the actor in the scene with you. When you get actors who are really generous when the coverage isn’t on them, that helps so much because they’re feeding you everything. You’re doing the work, but they’re doing it with you and for you. It’s a team effort.

BRIDGERS: Totally. How often does the magic come from being fully present, and how often is it like a dead-pet device where you’re thinking about something in your life that makes you upset or happy?

EDGAR-JONES: That is a thing, isn’t it? When you really draw from personal experiences. I definitely do that, but I’m mostly thinking about how it would feel to go through what that character’s going through. I usually put myself in their shoes or try to empathize with what they’re feeling rather than pull from my own experiences. Maybe that’s why I was always drawn to acting in the first place. I’m often too conscious in my daily life, wondering what other people are feeling and thinking. It’s a great thing, but it can also be bad because you’re too busy wondering if they’re having a good time. It’s the same thing when I’m acting. I’m like, “What are they thinking? How would that feel?”

BRIDGERS: Totally. I mean, we have completely different jobs, but I will fully catch myself onstage or recording thinking, like, “Did I leave the burner on in my house?”

EDGAR-JONES: I definitely get those. Like when I’m doing a listening scene and I’m like, “I wonder if this listening looks like the way I listen.” Even in life sometimes, I’ll be doing something and then a little part of me is going, “I wonder if I translated that to camera.”

BRIDGERS: What book do you hope never gets adapted into a screenplay?

EDGAR-JONES: I can’t think of one because all the books that I’ve loved, where I’d be like, “I hope they don’t adapt this, it’s never going to be as good as the book,” I’ve actually done. [Laughs]

BRIDGERS: I feel that way about Normal People. Phoebe Waller-Bridge sent me an email being like, “If you’re super depressed in your house, watch Normal People.” It was right in the beginning of COVID. I was like, “Dude, I’ve read Normal People. I don’t really want to live in that universe right now.” And she’s like, “Fucking do it.” I’m so glad that I tortured myself in that specific moment.

EDGAR-JONES: Isn’t that crazy, though, how life would’ve been so different had you just not (2)?

BRIDGERS: I straight up was not going to, and not even in a pretty way. I was just an emotional wreck. BRIDGERS: I have one final question. Now that people take it upon themselves to dig for things on the internet, is there, like, a school play, or something you posted in 2011, that you’re like, “Please, go away.”

EDGAR-JONES: There are some questionable pictures that I took thinking they were cool and sexy.

BRIDGERS: I wore a Supreme hat to school too late, in 2011. I had huge glasses and a Supreme hat. And I wore an all-the-way–buttoned-up polka dot shirt.

EDGAR-JONES: I want to find that photo.

BRIDGERS: I buried the lede. It had a pizza frame over the photo. Remember when pizza was a whole joke? Like the pizza cat?

EDGAR-JONES: I do remember that. Do you remember the phase where for some reason everyone thought it was funny to paint cat whiskers? Did you do that?

BRIDGERS: I did the thing where you draw the mustache on your finger.

EDGAR-JONES: I had a few friends who were going to get tattoos of that.

BRIDGERS: There was definitely a moment in my life where I was going to get an entire skeleton-hand tattoo. Thank god I was broke at the exact time in my life when I was trying to make those decisions.

EDGAR-JONES: Oh my god, I wanted tattoos too. I wanted a Daisy chain at one point. That would’ve been so sad.

BRIDGERS: I’m enabling you. Get it. Location: The Rainbow Bar and Grill