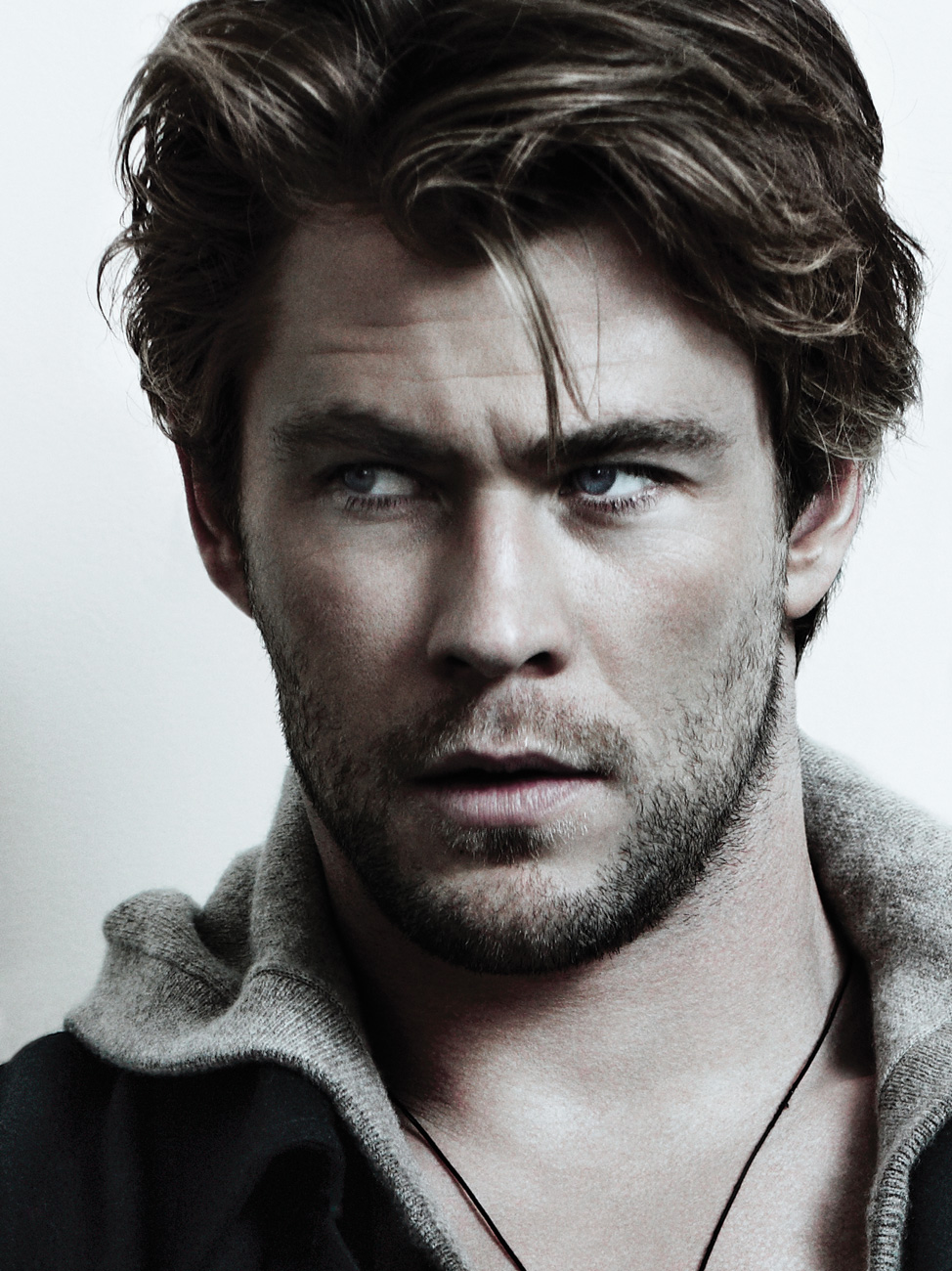 I grew up in a household with two brothers and we lived in the bush. We were constantly building weapons and forts and things. But I didn’t set out to be an action hero.”Chris Hemsworth

In the last few years, Chris Hemsworth has made the trans-Pacific leap from starring in a soap opera in his native Australia to appearing in Hollywood films—among those turns, a spin as Captain Kirk’s father in J. J. Abrams’s 2009 Star Trek reboot. And though Hemsworth’s character exploded in the first few minutes of that movie, the 27-year-old actor will be getting a lot more screen time this month as the titular hammer-wielding deity in the big-budget mega-movie Thor.

Based on the Marvel Comics version of the all-powerful Norse god of thunder, this new Thor, at least on paper, isn’t typical action fare, with a director (Kenneth Branagh) better known for his Shakespearean work and a cast filled with actor’s actors (Natalie Portman, Anthony Hopkins, Stellan Skarsgård, Rene Russo) to boot.

Later this year, Hemsworth will reprise his role as Thor in The Avengers, a sort of who’s who of comic heroes, which begins shooting this summer. He has also already wrapped the Joss Whedon thriller The Cabin in The Woods and the oft-delayed remake of silly-awesome 1984 Cold War flick Red Dawn, in which Hemsworth plays Jed, the ringleader of a group of high-school students fighting off an enemy invasion. (In the new version, the Soviet combatants of the original are swapped out in favor of a villainous organization of vaguely multinational origins.)

We had a phone chat with Hemsworth, who was at home in Los Angeles, to talk about Thor, wigs, weaves, and other very macho stuff.

CHRIS HEMSWORTH: Hi buddy how are ya? Let’s do this! I’m at home in Los Angeles eating a pear.

VAN METER: Cool. Sorry if this might be vague—studios never let you see blockbuster movies before you do the story anymore.

HEMSWORTH: They don’t even let us see it until the last minute. I just recently saw a close-to-finished version of Thor. I was impressed. It is often difficult to watch yourself onscreen, especially 60-feet high. As an actor, it is an uncomfortable experience. But this is one of the first times I was able to get lost in it as an audience member. There were so many impressive elements—from the special effects to the story to the individual characters. I really had a great time.

HEMSWORTH: You have these colorful and vivid worlds and they can either be amazingly entertaining or come across campy. Every superhero film has that challenge. Having someone like Kenneth Branagh direct was a smart way to avoid any campiness. He really is an actor-director and comes from a Shakespearean background.

HEMSWORTH: Absolutely. We had as much discussion and focus and collaboration as you would on a Shakespearean production. It wasn’t just a film about special effects. It was about great character development.

VAN METER: The cast is surprising for a comic-book movie.

HEMSWORTH: That is what makes this special. I am incredibly lucky to work with those involved! I think the attraction for Natalie to a film like this was Kenneth Branagh’s involvement. At that time in my life, I wasn’t in a position to pick and choose who I wanted to work with. I just needed to pay the rent, and I was excited to be involved with something on this scale. I was signed up either way! This is by far the biggest thing I have ever been involved in and there is more anticipation than anything else.

VAN METER: What is your personal history with Thor? Were you into comic books growing up?

HEMSWORTH: Not really. I knew about the character, but I never read the comics as a kid. Getting involved in the film was my introduction to it. Then I was inundated with many copies of Thor comics—the guys at Marvel gave me a stack. I also read a lot of books on Norse mythology.

VAN METER: In the myths, Thor rides a chariot pulled by goats.

HEMSWORTH: Yeah, we skipped that. That’s not too cool, is it? We chose a cooler mode of transport.

VAN METER: The only big-screen appearance of Thor, to my knowledge, is in Adventures in Babysitting [1987], which my sister made me watch each weekend growing up. In the film, the little girl is obsessed with Thor.

HEMSWORTH: I was at a comic convention the other day and someone made a reference to that. I didn’t know what they were talking about.

VAN METER: What bothers me about Thor is the same thing that irks me about Superman: he is just too damn super. At least he doesn’t have just one weakness like Superman with kryptonite. Is the new Thor as omnipotent? Or is he more complicated?

HEMSWORTH: His biggest challenges are his own personal demons and personality traits. He is a chip off the old block of his father. He has the tendency to think about problems in the form of destruction, or to act before he thinks, often with a fair amount of aggression. His journey is coming to terms with directing that passion in the right place and the responsibility of living up to expectations. And depending on what world he’s on and who he’s fighting, he certainly has people who are on the same level of strength who challenge him. But for us, it was about how to relate to someone with so much power, who is seemingly untouchable. I think there is a very human story in the center of it, about father and son and brother and brother.

VAN METER: The plot of the movie has Thor cast down to Earth from Asgard as punishment from his father. Were you ever cast out as a wild teenager?

HEMSWORTH: Not as far as from Asgard to Earth. There were some strong disagreements. My father and I are very similar and have a wonderful relationship, but we both stand by our opinions. As uneducated as my views might have been, I still backed them with intensity. But he didn’t throw me into another dimension. Not yet, anyway.

VAN METER: Thor is a Norse god, so why does he speak with an old English accent and always say thee and thy?

VAN METER: Do you think old English tattoos are tough?

HEMSWORTH: I don’t think they are. It was a brief fad. What was the next one? Chinese war symbols?

VAN METER: Tell me about the personal journey you went through to get your hair so long. Was it a wig?

HEMSWORTH: It was a blend of my hair, which grew during the filming, and a certain section of it was a wig.

VAN METER: Was it a wig or a weave?

HEMSWORTH: It was more of a wig. It wasn’t full scalp, but the majority. There were sections on the sides of my scalp where it was my hair amongst it.

VAN METER: Sounds like extensions. Were you glad to return to having short hair?

HEMSWORTH: I just finished playing a Marine. I much prefer my hair short, but I only had to wear the wig for working hours. I could take it off at home. Now I’m trying to grow it for The Avengers again, so we’ll see what happens. . . . There will be a whole new batch of interesting characters and actors. That film is going to be huge as well.

VAN METER: What is your hammer like in the film?

HEMSWORTH: It is a pretty impressive piece of equipment. It was quite heavy, so that helped with the stunts. If it was too light, you would swing it around like a toothpick and it wouldn’t look impressive. When there is some weight to it and you have to physically use your shoulder and back, it gives you a sense of power. I got very comfortable holding it. When I did the earthbound scenes without it, I felt naked.

VAN METER: I’d feel naked without my hammer, too.

HEMSWORTH: So you should. My older brother told me, “Make sure you keep a hammer,” but I forgot and missed my opportunity. I could sell it on eBay and make a quick buck.

VAN METER: You’re also in the new remake of the ’80s Cold War film Red Dawn. I watched it so many times as a kid. I think in this version the villains are switched from being Russian to North Korean.

HEMSWORTH: It’s a blend! The Russians are still there—it’s a collaboration of a few different countries. The story for us is mainly this unknown enemy we are fighting living in the woods and the backdrop is the oppressive army.

VAN METER: You got your start on the Australian soap opera Home and Away. What are soaps like down under?

HEMSWORTH: They’re incredibly melodramatic, but sometimes they can just be about who stole the milk money from the canteen. You are really on your toes. You shoot 20 scenes a day, five episodes a week. I was there for three years, and the material is sometimes good, sometimes not, and you get to work with a lot of different directors. As a young actor, I couldn’t think of a better environment. It was even better than drama school. In school, they tell you how to do it. With this, you were forced to learn. I am thankful for that period.

VAN METER: That is such a weird path, to go from being a soap-opera heartthrob to an action star. Did action movies speak to you? Were you a fan?

HEMSWORTH: I loved the stuff. As a kid, I loved any fantasy. I grew up in a household with two brothers and we lived in the bush. We were constantly building weapons and forts and things. But I didn’t set out to be an action hero.

William Van Meter is a frequent contributor to Interview.