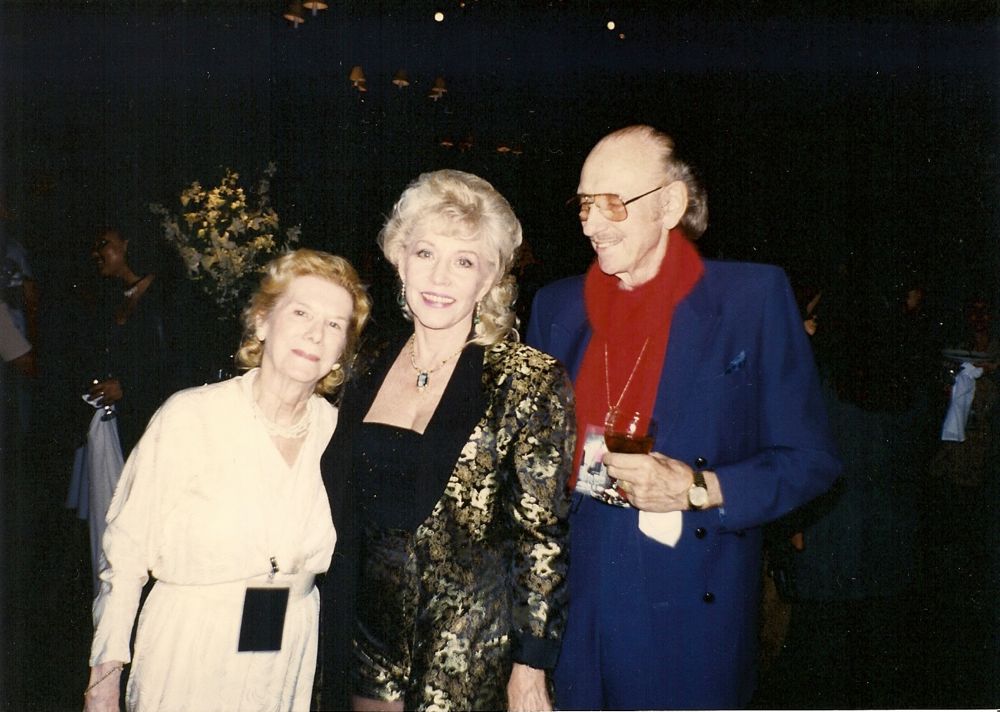 Straight cross-dresser Ed Wood was often ostracized and ridiculed during his life. The now-legendary filmmaker, producer, actor, and writer of lurid pulp novels lived in boozy poverty with his wife Kathy in Hollywood at the height of his career in the 1950s. At a time when sexual orientation and America’s identity were strictly conservative, Wood explored the darker side of human nature—albeit through an unapologetically pop medium. He created cult-classic movies and pervy paperbacks with titles like Killer In Drag. He and his wife Kathy also rubbed shapely shoulders with Hollywood’s elite at underground transvestite parties.

It wasn’t until after Wood’s death that his work was truly revived. Yet, his widow Kathy was then living in low-income apartments on the sleazy side of Hollywood Boulevard, surrounded by Latino gangs, gunshots, and hookers.  Bob Blackburn, a Seattle-born radio personality who had just moved to Los Angeles, became her neighbor, forming an unlikely friendship that would last for the next 13 years. With the anniversary of Ed Wood’s death Saturday, we spoke with Blackburn, now the co-custodian of the Ed Wood Jr. Estate, about how he met Kathy, Tim Burton’s famed film adaptation of Wood’s life, secret celebrity drag soirées, and how a chance encounter with Kathy changed his life.

ROYAL YOUNG: I’m wondering if you had any interest in Ed Wood, or even in a broader sense, in camp or sleaze before you met Kathy Wood?

BOB BLACKBURN: I was a Rocky Horror Picture Show fan. I knew about Ed Wood. I thought it was campy, kinky and cool. After I moved to L.A., there was this little old lady—she’d shoot me for calling her old—and I’d see her walking her dog, who was the oldest, scraggliest dog in the world named McGinty.

YOUNG: When did you realize this woman was Kathy Wood?

BLACKBURN: Two guys here, Eric, who ran the Hollywood Book and Poster Shop and Johnny Legend, who had compiled all the great cult movie trailers, teamed up together one summer and rented out The Hawaiian Garden Theatre at the bad end of Hollywood Boulevard. Every weekend they’d show Blood Feast, Biker Chicks From Hell, and all this sort of 42nd Street stuff.

YOUNG: What drew you to that underground, sleazy 42nd Street vibe?

BLACKBURN: I’m not into Harry Potter. I like Beach Blanket Bingo and Fellini, I like rock ‘n roll. They did an Ed Wood-a-thon, with a lot of people who had worked with him, like Forrest Ackerman, who did Famous Monsters of Filmland, Vampira was there, Paul Marco, who played Kelton the Cop. Then they screened documentaries in which Kathy Wood was interviewed, and I’m sitting there looking at this person on the screen and going, “Wait a minute, that’s my neighbor!”

YOUNG: So how did you go from that to building a friendship with her?

BLACKBURN: A few weeks later I bumped into her in the stairwell and asked her flat-out if she was Kathy Wood. She said she was, but why did I want to know? She was very defensive. But we chatted for a few minutes. Then my friend who worked in film told me that Tim Burton was planning to make a movie about Ed Wood. I said, “I bet she doesn’t even know it.” So I went down the next day and knocked on her door.

YOUNG: Why did you feel such a personal responsibility to let Kathy know?

BLACKBURN: My impression was that she was a bit of a hermit, and I had a feeling that she was disconnected from the world. It seemed to me that Columbia Pictures wanted Kathy to give them all her rights and her story. Kathy was on welfare, Social Security, Medicare, and had gone through open-heart surgery. She and Ed had had no money and had been evicted from their last apartment. When Columbia dropped the project and Disney took it on, Bob Weinberg, the entertainment lawyer, got her more money. She was able to retain the rights to her story and got to meet Johnny Depp and Patricia Arquette, who played her in the film.

YOUNG: I’d love to get a better sense of Kathy’s personality, what her apartment and world were like, and how you fit into that.

BLACKBURN: Kathy was always very polite and demure in public. She had a very small studio where she slept on a sofa. She had a nicely framed photo of Ed with a mustache, looking very much the lothario and dashing on a table by her window, and one of him as a Marine. She got all her clothes in thrift shops, but she had a great eye. She could pick out a Chanel from across the room.

YOUNG: Was clothing something she and Ed had bonded over?

BLACKBURN: There were only a few times when she would talk about Ed’s cross-dressing.

YOUNG: How did she address it when she did?

BLACKBURN: She’d just casually mention it, like, “Ed was working on a script at the typewriter, dressed like Shirley.”

YOUNG: So there was a nonchalance to it.

BLACKBURN: Yes, and that was the whole key to their relationship. Ed had briefly been married to a woman named Norma McCarty. Norma had been married before and had an eight-year-old son. When she found out Ed was a cross-dresser, she left him. She thought Ed might be gay or a pervert who would molest her son. When Ed met Kathy, they stayed up all night talking. Because Norma had left him, he just told Kathy right out. She saw some negligees in the closet and Ed said, “They’re mine. I dress that way sometimes.” Kathy was taken aback, she was a child of the 1920s and ’30s, but she would always say, “Well, he was such a handsome son of a gun.” They fell in love. But they were different sizes. I don’t think they shared shoes, undies, blouses, or dresses. Though they would go out together to drag or transvestite parties in the Hollywood Hills. The one person she mentioned was Vincent Price. She’d say, “Vincent was so pretty.”

YOUNG: Was that their only vice?

BLACKBURN: They were both alcoholics. When I knew her, she was still drinking. If it was two o’clock, it was martini time. She really loved Chardonnay wine. We’d go to the supermarkets—wherever the cheapest Chardonnay was, that’s where we shopped.

YOUNG: As you got to know her and got close to her, how did your idea of what you were getting into change? How did it become a friendship rather than a neighborly knock on the door saying, “Hey, I think this movie about your husband is happening?”

BLACKBURN: As she got to know me, she started opening up more about her life. I always felt an obligation to check on her. She was a nice lady who needed help, and I was a single guy with nothing else going on, except work. I didn’t have a wife or kids.

YOUNG: It sounds like both of you were kind of lonely and unmoored and were drawn to each other as companions.

BLACKBURN: [laughs] Well, don’t make it into a romance. She was funny and a great conversationalist who loved to tell stories and watch movies.

YOUNG: When Kathy eventually died, how did that effect you?

BLACKBURN: She had stage four cancer of the esophagus. She was in the hospital on a morphine drip, and I’d just go sit and talk with her for hours. But I didn’t want to be there when she died. I couldn’t see that. Her dad was a surveyor up in Vancouver. He spent a lot of time away in the woods, but he’d come home for holidays and he always used to tell Kathy to hitch her wagon to a star. She repeated that to me I don’t know how many times. She’d say “Dad always told me to hitch my wagon to a star, and Eddie was mine.”