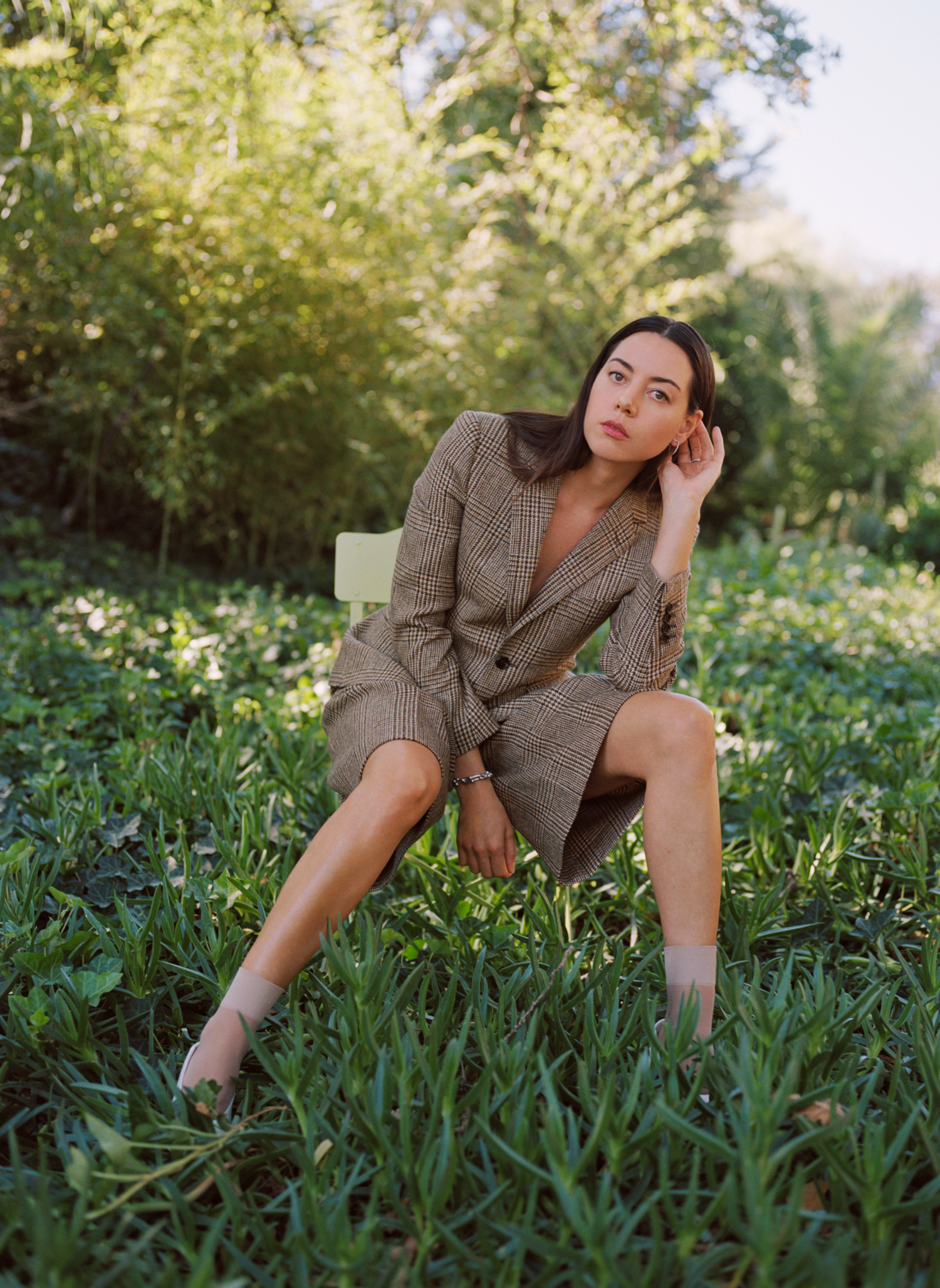 Jacket and Shorts by Celine by Hedi Slimane. Earrings and Bracelet by Tiffany & Co. Ring by Bvlgari. Socks by Falke. Shoes by Camper.

Deadpan. That is the word most often used to describe Aubrey Plaza, or at least the characters she’s portrayed on screen. It’s not entirely inaccurate. Since she arrived in Hollywood at the age of 24 after distinguishing herself at the New York improv institution Upright Citizens Brigade, Plaza has dissolved costars into dust with her withering delivery and death-ray stare. She did so most notably as April Ludgate on the otherwise cheery NBC sitcom Parks and Recreation, and in cultish gems such as Funny People and Scott Pilgrim vs. the World. But over the last few years, the 36-year-old actor has turned toward darker fare, digging deep into the psyche of a crazed Instagram fangirl in the Sundance hit Ingrid Goes West and an unnerving psychiatric patient on FX’s mind-bending comic book adaptation Legion. Most recently, she plays an enigmatic writer-director who intrudes on a young couple’s life in Lawrence Michael Levine’s twisty psychodrama Black Bear. It’s a performance that is destined to blow minds, including Adam Sandler’s. —BEN BARNA

AUBREY PLAZA: I’m sorry I’m late. I fucked up. I was waiting for someone to call me. I’m an idiot.

ADAM SANDLER: Aubrey, you thought we were supposed to talk at 3:06, didn’t you?

SANDLER: I’m happy to talk to you. Do you hear me? Because you keep going in and out. What’s with your fucking phone, Aubrey?

SANDLER: No, I hear you good now. I just wanted to make you upset.

PLAZA: Should we just forget this whole thing?

SANDLER: I’m happy you asked me to do this, buddy. This movie is unbelievable.

SANDLER: Your performance killed me.

SANDLER: I loved you in it. I couldn’t believe what I saw. This is just a monumental performance. People are going to be so excited seeing this. You dove in there so deep. But let’s talk about other shit first. I’ll ask you some questions.

PLAZA: Okay. I don’t want to take up too much of your time.

PLAZA: What do you mean?

SANDLER: I know your movie had a lot of night shoots. Do you eat morning, afternoon, and night, or do you switch it? How do you handle the switch?

PLAZA: I eat for fuel. When I’m shooting something, I don’t care about eating. I just eat when people tell me to eat.

SANDLER: But what about when they say, “That’s lunch”? You don’t get excited? Don’t you sometimes ask the AD, “What are we eating?”

PLAZA: It depends on what kind of movie I’m on, because sometimes I’m on small movies where everyone’s eating weird shit. This movie was good because Sarah Gadon, who’s the other actress in it, is really healthy, so she would bring me snacks.

SANDLER: So you’re not obsessed like me, where all day long I’m like, “I can’t eat that, I’m going to get in a bad mood if I eat that.”

SANDLER: Do you take naps during the day like me?

SANDLER: When your parents told you to go take a nap, you just had your eyes wide open, staring at the ceiling?

PLAZA: Probably. I need to learn how to meditate or something.

SANDLER: I don’t have good naps. I have sad, sweaty naps, and I wake up upset. How many movies did you do before Funny People?

PLAZA: I did one movie right before that, a very small movie with Donald Glover and a bunch of New York comedy people [2009’s Mystery Team]. That was my first big job. When was that?

SANDLER: Ten years ago, or something?

PLAZA: That’s fucked up. I can’t believe that.

SANDLER: It’s terrible. But you are maintaining your youth. Believe me. Everything’s okay. I do remember loving your family, and I remember seeing your family at the award show, which you were so funny at [the 34th Independent Spirit Awards, which Plaza hosted]. You were locked in, and you can sing so great. Can you harmonize?

PLAZA: Yeah, but that wasn’t a good example.

SANDLER: It’s a great example. It was a live show, you nailed every line, you sang nice, you were never off-key. I’m not good at harmonizing.

PLAZA: I can do whatever. Just give me a minute and I’ll figure it out.

SANDLER: That’s good to have, buddy. Were you in a band growing up?

PLAZA: I’m sitting on a porch. I have five mosquito bites. I don’t know what’s happening.

SANDLER: Are you still on the fucking lake?

PLAZA: No, but that was actually really fucked up.

SANDLER: Where the fuck was that?

PLAZA: It was upstate New York, and it was crazy. We had to reshoot stuff because there were so many bugs that you could see them in the lens.

SANDLER: When you were swimming in the lake and you guys were messing around with each other and splashing around and stuff, was it warm or cold?

PLAZA: It was warm. That was a scary night, because you’d think that I’m the kind of person who would be like, “Let’s jump in the lake and get crazy,” but I never want to go in.

SANDLER: You’re afraid of the fish and stuff?

PLAZA: I don’t want to feel the slimy fish and the muddy, slimy buggies.

SANDLER: Were you treading water or standing in the muck?

PLAZA: I was treading water. I’m not touching that shit.

SANDLER: Touching the bottom is where it always gets scary. Now they have booties that you can wear.

PLAZA: I don’t want to. Don’t make me wear the booties. SANDLER: No, you would like it. The only humiliating part of the booties is before you get in, but once you’re in, no one knows the booties are on, and you’re so relaxed in the booties. I want you to start wearing booties more, Aubrey.

PLAZA: I’ll do whatever you say.

SANDLER: [Laughs] How many days did you shoot this movie for?

PLAZA: I don’t know. Twenty days, maybe? We had to go back and reshoot the first three days on the weekends.

SANDLER: Because of the bugs?

PLAZA: No, because of other shit. It was a real head trip, because I had to do those things over and over again. It almost felt like a sick joke.

PLAZA: That was the scariest part, to play drunk for that many days, because we were shooting nights and I was not mentally prepared for having to throw my body around. I had tremors in my muscles because I was swinging myself around like crazy.

SANDLER: The other actors must have been like, “Holy shit, what she’s putting herself through is insane.” By the way, where are people going to be able to see this movie?

PLAZA: It’s coming out in the theaters, and then also on demand, whatever that means. I don’t think anyone’s going to go to the theater.

SANDLER: Yes, the pandemic. It’s a terrible thing. But people have to see this movie. It’s a brand-new vibe. How did you meet this director [Lawrence Michael Levine]? This guy is incredible.

PLAZA: We actually just met at a party. His wife is a filmmaker, and I met her first. He’s an indie filmmaker from New York. We were cast as a husband and wife in this Netflix comedy show [Easy], so I met him shooting this thing for five days. He was like, “Since we’re playing a married couple, do you want to do some intimacy exercises on the lawn?” And I was like, “Yeah, dude, I’ll do whatever you want. I’m down.” I thought that was really funny that he was just really doing such a deep dive. The episode wasn’t even about our characters. It was about mail being stolen. So it was just funny to me, and then we became friends over that.

SANDLER: I like that. You produced it, too, right?

PLAZA: Yeah. I produced it because when I read it, I was like, “I don’t know how I’m going to pull this off. This is dark and fucked up. If I’m going to put myself through this, then I want to have some level of control.”

SANDLER: You must have been so excited when you read that script. By the way, for the first half hour, I was like, “Wow, this is cool as shit.” This has such an original vibe to it. Just you walking with [Christopher] Abbott, talking and getting to know each other. Then Sarah comes in, and I was like, “Okay.” I didn’t know where it was going, but I felt it was real and fresh. Then where it goes to, when you were reading the script, you must’ve been like, “Holy fuck. I didn’t know that was coming.” That must have knocked the shit out of you.

PLAZA: The scene in the first half is like a 14-page dinner scene. I was excited about doing that. There really wasn’t much improv at all. I think I normally just end up doing a lot of improv, but I was more interested in doing it like a play.

SANDLER: You lose your mind on a movie set. You’re hungry, so much heavy shit’s going on, and you’re just trying to get it all in there. A lot of times when I do an emotional movie, I see what’s coming that week and I’m like, “Oh fuck. That’s a big day. Tuesday, oh shit. Wednesday is a big day, too. Thursday, I can handle that.” You had fucking weeks of being full tilt, upset, and emotional, right? That must have been painful.

PLAZA: I was losing my mind. We were living in these weird cabins in the middle of nowhere. I was shooting nights pretty much the entire time and I was staying in this small town called Saranac, New York. I’d be shuffling around trying to get a cup of coffee or whatever. I think people legitimately thought I was a street person. I really looked insane.

SANDLER: Night shoots combined with being nuts makes you crazy in the daytime. People look at you like you’re on your own planet.

PLAZA: The lines started to get blurred toward the end because we shot it chronologically, and I started to not really know what was real or not. I really fell apart afterwards.

SANDLER: You’re very tight with your family. Have they seen the movie yet?

PLAZA: My parents saw it. My mom was horrified.

SANDLER: Of course. Seeing you in so much pain must have killed them.

PLAZA: Yeah. I think they were worried about me when I was shooting, too. Because I just wasn’t normal. They were a little bit concerned about that. I don’t know if my grandma can handle it.

SANDLER: She doesn’t need to see this one. Maybe just show her a rerun or something else you’ve done.

PLAZA: I’ll send her my Criminal Minds episodes and be like, “Just watch this, grandma.”