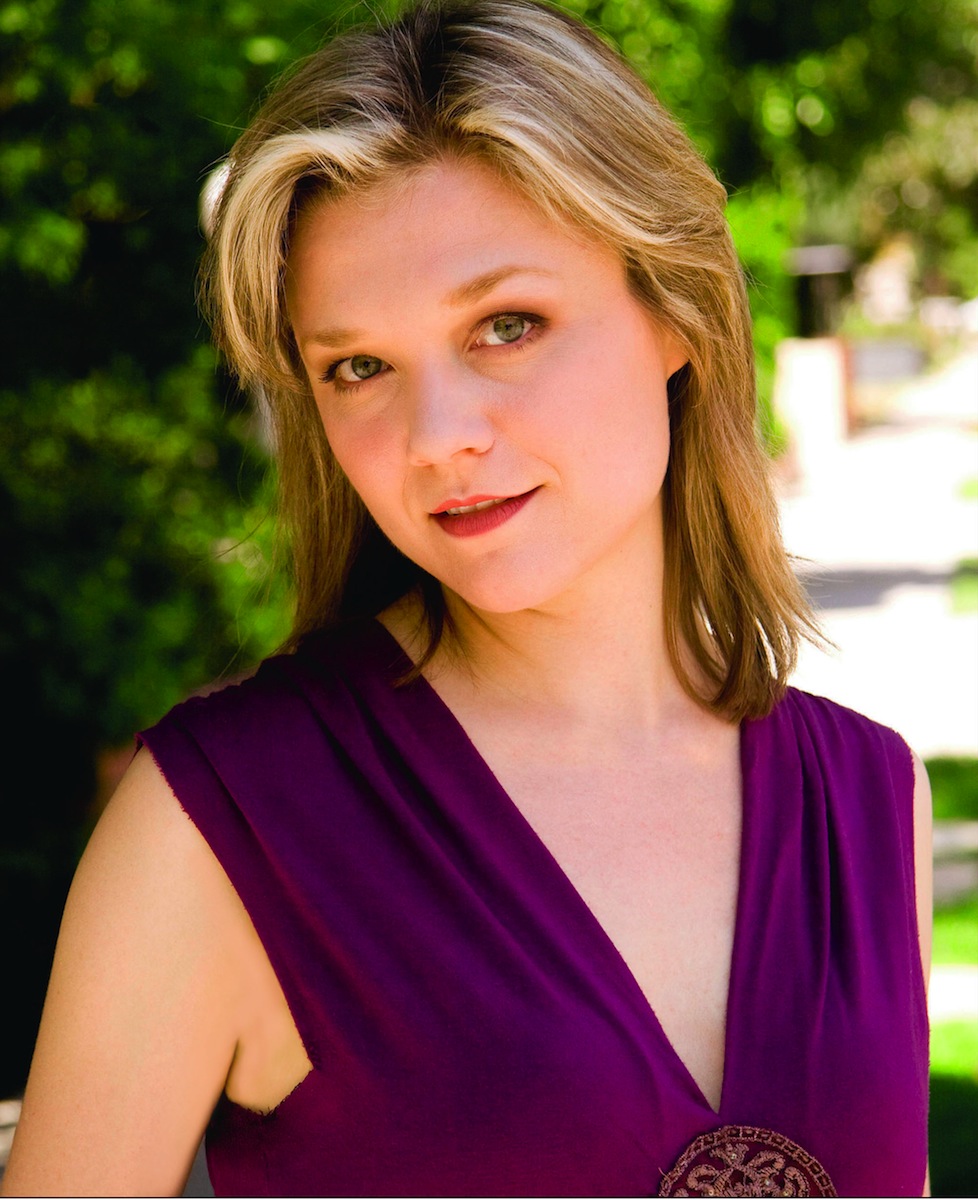 At the age of 12, at a time when most of her peers were catching bugs at summer camp, Ariana Richards busied herself playing tomboy Lex in the now-classic film Jurassic Park. Though the actress also appeared in other cult favorites, such as Tremors, Angus, and the controversial music video for the Ben Folds Five song, “Brick,” she has since moved away from acting, choosing instead to focus on portraiture.

Now 32 and living in Oregon, a decidedly adult Richards agreed to speak with us on the eve of the Jurassic Park Ultimate Trilogy Blu-Ray release about dinosaurs, Jeff Goldblum, and what the film means to her today.

JEFF OLOIZIA: Why do you think Jurassic Park still resonates so much with audiences today?

ARIANA RICHARDS: It’s a film that touched so many people when it came out. I was just 12 years old—I turned 13 during the filming—and it was one of those things where I just enjoyed the experience of creating the movie, and then everything that happened after, the whole landslide, was all a surprise. I was not prepared for the fact that huge numbers of people would recognize me on a daily basis. I mean, I couldn’t eat lunch somewhere without people lining up to talk to me. But now, it’s still continuing, and I’m noticing that young people—even young children who didn’t have a chance to watch it when it came out in the theaters, they’re totally loving [it] and their parents are saying that they watch it all the time.

OLOIZIA: I think it holds up pretty well over time, especially considering it was, what, ’93 when it came out?

RICHARDS: I know, it’s amazing. I’m kind of blown away when I think back.

OLOIZIA: So you’re 12 years old, and you get the call from Steven Spielberg asking if you’d like to come out to Hawaii to be in this huge film about dinosaurs. What was going through your mind?

RICHARDS: I was actually there in his office when he asked me. He had already seen my work in previous films I’d been in, and I guess he liked [it]. And I’d been put on tape screaming, so apparently he liked my screaming as well. He was just really friendly and put me right at ease. We chatted and had a good time, and by the end of that meeting he was saying, “So Ariana, are you busy this summer?”

OLOIZIA: Did he indicate that there was any one film or performance that sold him on you?

RICHARDS: I found out later that he really liked my work in a movie called Diaster in Time, that we actually filmed very near where my studio is here in Oregon. Jeff Daniels played my dad.

OLOIZIA: Very cool. Did you have a favorite cast member to work with on Jurassic?

RICHARDS: Oh boy. I would say it was especially memorable working with someone like Richard Attenborough. I remember the days that we would be working the same time as him, he was very warm and grandfatherly to us. What a wealth of knowledge, and just a generous person.

RICHARDS: [laughs] I do! Jeff just is great. We were all sitting in the helicoptor between scenes, and Joey [Mazzello, who played Tim] and I are there, and Jeff is sitting there sitting next to me [with] his script in his hands. But I was struck by the fact that he wasn’t studying it like most people I’d been around that were actors, who’d study quietly [and] kind of unobtrusively. He was speed-reading them out loud! [laughs]

OLOIZIA: That seems to be in tune with his character.

RICHARDS: Yeah, I think he brought a lot of himself to that character.

OLOIZIA: What about you? Lex is sort of a computer whiz. Is that something that was already apparent in your own personality?

RICHARDS: No, not at all! [laughs] I wasn’t technically savvy when it came to computers. Although I knew how to use them, I wasn’t a whiz by any means. It was actually a neat experience to play a character where they let me sit there and work with a Unix system in person. The computer guys actually were operating a real Unix system from the other room, and I was supposed to make it look like I as manipulating it from the screen. After a little while I asked, “Would it be all right if I actually fly around in this world here?” And they said, “OK.”

OLOIZIA: Yeah, there are some pretty good references, like the Unix system, and then when Lex and Tim are in the car and she says something along the lines of, “Oh, it’s an interactive CD-ROM!” But I think those are the only moments where the movie really dates itself.

RICHARDS: Right, CD-ROM! Wow. Back in the day, right?

OLOIZIA: I think I’ve still got my Encarta ’95 CD sitting around somewhere.

RICHARDS: Oh yeah. [laughs] It is interesting, though, because it does hold up so well. And playing the character who had those abilities—it was refreshing to play an empowered young girl character.

OLOIZIA: Yeah, well, you sort of get to save the day at the end of the movie.

RICHARDS: Thanks to Steven. He really gave me a nice amount to do there, and a nice inspiring, empowering character.

OLOIZIA: Did anything stand out about working with Steven?

RICHARDS: Oh yeah. I’ve been in about 40 films, and getting a chance to work with him was one of those things where… we didn’t really notice how he worked with us kids. He was so warm and enthusiastic. When we’d get a scene the way he wanted, he would just get so excited. He’d come over and just sweep us up in his arms with a big hug.

OLOIZIA: It sounds like a great place to be as a kid.

RICHARDS: It was. It’s pretty incredible to step into that as a child. Of course, there were difficulties that we encountered as well, like the hurricane that hit on the island of Kaua’i during the filming. It hit the last day that we were supposed to be filming—it hit on my birthday.

RICHARDS: So going through that, we had to weather the storm. It decimated the island for years. We had to fly back to Oahu to finish a few days of filming there to actually get the gallimimus stampede completed.

OLOIZIA: The one word that kept popping up when I was thinking and reading about Jurassic Park is “wonder.” Did that sense of wonder come through on the set as well?

RICHARDS: Yeah. I can speak from the perspective of being a child working on that set, and for me it did hold that sense of wonder. I think that’s a really good word for it. It wasn’t about analysis; it wasn’t some mechanical, measured feeling to being there on that set. It was always varied and new. And then for a young person, to get a chance to kind of simulate what it would be like to step back in time with the dinosaurs, I would say Joey and I got to be the very closest to that experience.

OLOIZIA: Spielberg did recently confirm a fourth Jurassic Park. Have you heard anything or been approached about that?

RICHARDS: They’re keeping everything very hush-hush. So I don’t know anything, as of yet.

OLOIZIA: Is there anything specific you’d like to see in that film?

RICHARDS: If they actually do create it? I think I’m going to leave that up to Steven. If he actually decides to do this, I’m sure he’s got a vision for it.

OLOIZIA: Do you think that being part of a legacy project like Jurassic Park made it easier to step away from acting?

RICHARDS: People ask me, “So did you step away from acting or decide to leave the business?” I let them know it’s not about making a choice. Acting is always going to be something that’s in my blood. It’s more that my interest has been really taken by visual art and doing the oil paintings for people. But at the same time, I still have an agent. If some really interesting role came along and found me, I’m sure I’d be thrilled to do it.

OLOIZIA: Do you still get recognized today?

RICHARDS: I do. Amazingly enough, it still happens. And I’ve come to be aware of the signs. I’ll notice people whispering to each other and acting nervous.

OLOIZIA: And do people ever quote things back at you?

RICHARDS: Oh yeah, for sure. I didn’t see it in person, of course, but I got a kick out of the fact that a lot of people were talking to the movie screen when Jurassic came out, telling me to put down that light. “What are you doing, you stupid girl?!”

OLOIZIA: [laughs] I may have uttered that, myself. But hey, you got to redeem yourself in the end.

THE JURASSIC PARK ULTIMATE TRILOGY IS OUT ON BLU-RAY TOMORROW.