Throughout the 72nd Cannes Film Festival, Antonio Banderas heard whispers that he might win the Best Actor award. But the Golden Globe-, Emmy-, and Tony- nominated actor had learned to manage expectations. Which is why, at the closing ceremony, when Banderas’s name was announced as the winner for his role as an aging director confronting his own mortality in Pedro Almodóvar’s autobiographical drama Pain and Glory (which also screened at the Toronto Film Festival in September), his joy was palpable. The victory served as an apogee to a career that has spanned nearly four decades, and a tribute to the 59-year-old actor’s partnership with Almodóvar, which has included eight films dating back to 1982, when the director cast Banderas in Labyrinth of Passion. Their fourth film together, Tie Me Up! Tie Me Down! (1989), which starred Banderas as a psychiatric patient who kidnaps a porn star, took him to Hollywood, where his Mediterranean swagger elevated pulpy movies such as Desperado (1995), Assassins (1995), and The Mask of Zorro (1998). In Evita (1996) and Frida (2002), Banderas brought his quiet gravitas to biopics of extraordinary women, and he proved so irresistible as the voice of Puss in Boots in the Shrek franchise that he was given his own movie. But it was Almodóvar who finally created the role Banderas was born to play: an artist grappling with lost love, failure, and the pursuit of a creative life. Here, with some help from his friend and Pain and Glory co-star Penélope Cruz, Banderas does the same.

ANTONIO BANDERAS: Penélope, what do you want to know about me that you don’t already know? Let’s see if you are as good at journalism as you are at acting.

PENÉLOPE CRUZ: Let’s try. People usually think that actors meet through work. Nobody knows that we were neighbors in New York for years.

BANDERAS: Starting in 1993, when I was shooting Philadelphia. I was renting an apartment in Greenwich Village and traveling by train to Philadelphia. You were probably new to the United States. You had already done some important things. You were a very interesting girl.

CRUZ: Do you remember that I sometimes cooked for you?

CRUZ: I’ve become even healthier. So, I want to take this opportunity to congratulate you on your win at Cannes, which I already did on the day it happened, but I’m doing it again. Did it catch you by surprise?

BANDERAS: I have been an eternal nominee. For many years I’ve been nominated for important awards, but I never got onstage. Four times at the Golden Globes, four times at the Goyas, the SAGs, the Tony Awards, all of them. I never believed that I could win until I was told that I won. The truth is, it is a joy. I’m not going to hide it.

CRUZ: You made a very brave choice, which was to avoid doing an imitation of Pedro, even though I imagine that was very tempting. You chose to get at the essence of Pedro, without becoming a caricature. Did you intentionally run away from that?

BANDERAS: It was deliberate. Pedro told me, “If you want to incorporate any of my mannerisms, feel free.” But I wanted to try to create the character inside out. Pedro already made the decision to style my hair like his, to dress me like him, to use an exact copy of his apartment in Madrid. The essence of the character is a very lonely man, a bitter man, with a lot of unfinished business. He hasn’t come to terms with himself. To imitate him would have been dangerous. Pedro writes as he speaks, so there was a piece of him in my interpretation. But the character moves very little, speaks very little, and observes a lot. He’s a witness to his own history. 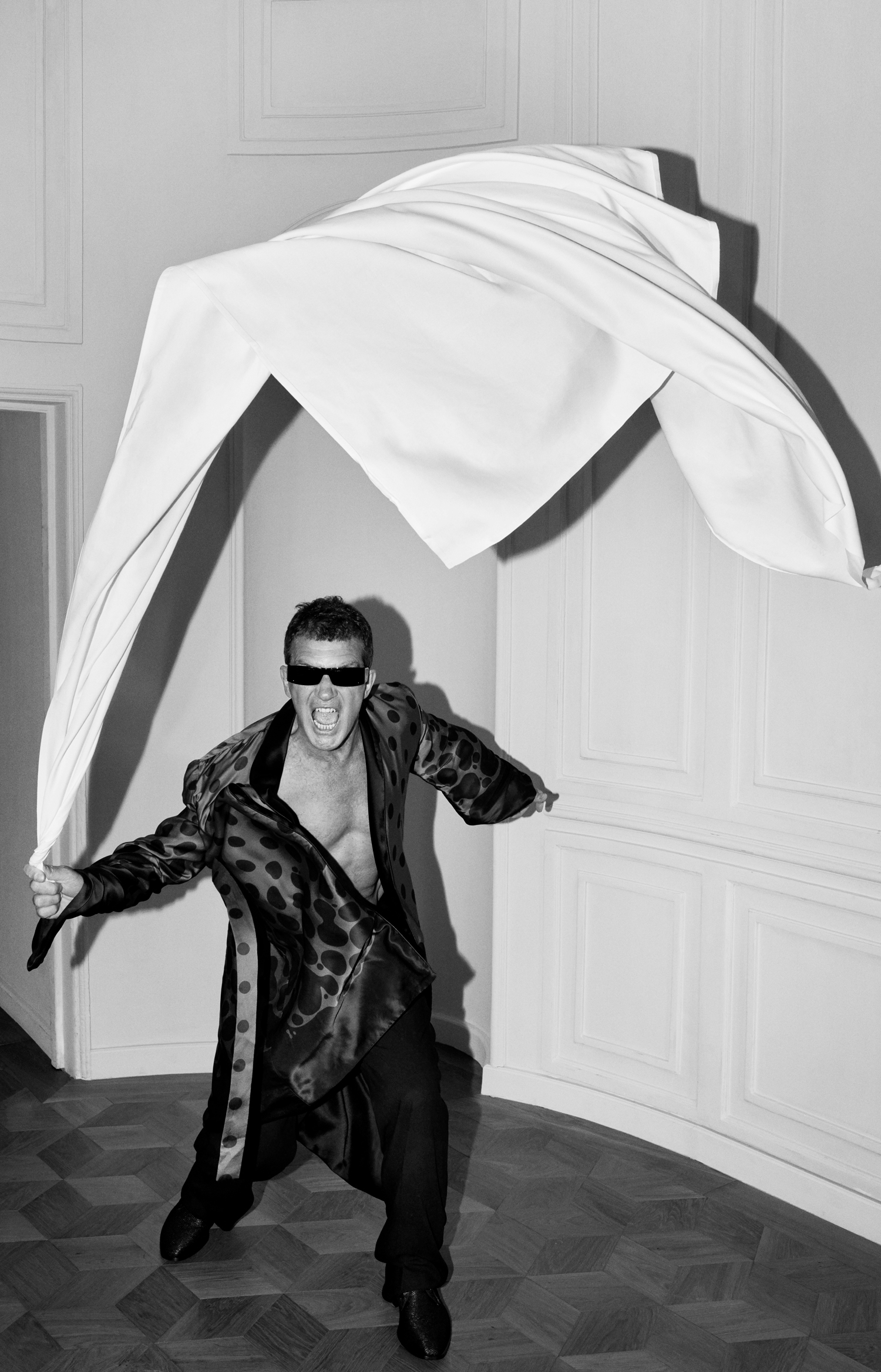 CRUZ: If I’m not mistaken, you’ve made eight movies with Pedro.

BANDERAS: The only other person who has made eight movies with him was Chus Lampreave, may she rest in peace. I’m tied with her.

CRUZ: I’ve done five, and, counting that cameo with you, six. People assume that after so many films together, you arrive to set feeling relaxed and that you know what the other person is thinking. With Pedro, each time feels like the first time. He treats the work with such respect that he lives it as if it were his first time making a film.

BANDERAS: Pedro and I have been friends for almost 40 years. He is an incredibly private person, and there were some limits in our friendship that I was perfectly aware of and that I never tried to cross. That’s why, when I read the script for the first time, I was surprised by a series of things that I didn’t know. I did not know that he wanted to talk to his mother, ask for forgiveness to his actors, his lovers, cinema, and himself. We finished a week and a half ahead of schedule, because things went so well. It had been years since I had seen Pedro so happy and relieved. Do you remember how he reacted to the wrap?

CRUZ: I was next to you, and you and Pedro held hands and cried together. Now that you have done this character, do you somehow understand him even more?

CRUZ: We’re all of those things.

BANDERAS: We all travel through life with a suitcase full of misery and greatness, pain and glory. Everyone can identify with that.

CRUZ: People always ask me, “How do you always get along with Pedro on set?” It’s because we connect on a personal level. To do that, I become a piece of clay while shooting with him. That doesn’t mean I don’t give my opinion, or that he doesn’t accept changes. Pedro wants you to go through the process with him.

BANDERAS: You trust him. What used to be painful is not anymore. What was an obstacle is now an open door.

CRUZ: You have to attack these projects from a place where you feel like a student.

BANDERAS: Curiosity is fundamental. There is a moment in life—and I had this experience two and a half years ago with my cardiac issues—when you realize that there is only room for the truth. There is a moment when you say, “If it is not something that is completely true for me, I’m not interested.” You realize that years are passing by and that life is getting shorter. During the rehearsal period, Pedro said to me, “Antonio, since you had your heart attack, there is something in you that has changed. Do not be afraid to show that part of you.” I knew exactly what he was talking about. When you see death so closely, it leaves a mark and it stays there, sticking to the heart. Pedro detected it, and I used it throughout the movie. It is a type of sadness—not depression, just the character’s sadness of knowing that death exists. Penélope, deep down you know it, that we are no more than the experiences we have. Us actors, we live off of that. If there are no experiences, there is nothing. Jacket by DIOR MEN. Tank Top by HANES. Pants by GIORGIO ARMANI. Socks by WE ARE SPASTOR. Shoes by GIVENCHY.

CRUZ: That’s why we have to continue with wide-awake curiosity. What can you tell me about balancing being a father and an actor?

BANDERAS: Frankly, I didn’t manage it very well. I missed so many moments of my daughter’s life that I will never recover. When she was very young, I was not there for her birthdays because I was working in Argentina or Italy, or wherever. You try to recover those moments. Now she’s coming to Málaga and then to London, and we’re going to spend time together. The best production I’ve ever done in my life is my daughter, but it’s the one I have not been able to take care of completely. That is something I will always carry with me.

CRUZ: It’s interesting to hear you answer that question, because it is usually something that is only asked of women.

BANDERAS: One thing that I believe has been good for Stella [Banderas] and the rest of my children is my relationship with Melanie [Griffith]. Even though they are not my biological children, I consider them mine. Dakota [Johnson] was five years old when I came into the family. And Alexander [Bauer] was nine. I raised them. Melanie is no longer my wife, but she is my family and will be my family until the day I die. The children are very grateful that we can look each other in the eye, have dinner, and talk a lot. I talk to Melanie every other day.

CRUZ: You always speak of her with such respect and love, and I think that’s lovely. Good for you both that you’ve been able to achieve that type of relationship.

BANDERAS: I love her very much. Some people consider a separation a failure, and some people don’t take that failure very well. They point fingers, and from there everything breaks down. We decided not to bury 20 years of our lives, because we’ve been through a lot together.

CRUZ: Don’t you feel like you have a certain peace of mind now, one that you wouldn’t trade for being young again? That’s been happening to me a lot lately.

BANDERAS: Without a doubt. I look back on my twenties, and I was so anxious. Things didn’t come fast enough. I wanted things to arrive before their due time. Not everything is wonderful during the spring of our lives.

CRUZ: There is this thing that Alejandro González Iñárritu said that I like a lot: “Low expectations, high serenity.” It more or less defines the anxiety we’re talking about.

BANDERAS: I think the worst enemy of success is the anxiety to get it. When things don’t happen and the box closes, you have to relax and enjoy your work, and then the box will open.

CRUZ: Can you share something that people don’t know about you? A little secret.

BANDERAS: If there’s one thing my friends tell me, it’s that I’m a very transparent person. I find it difficult to keep secrets.

CRUZ: That’s true. You do tell me a lot of things.

BANDERAS: I really don’t have many secrets.

CRUZ: And the ones I know, I won’t tell to anyone. Don’t worry.