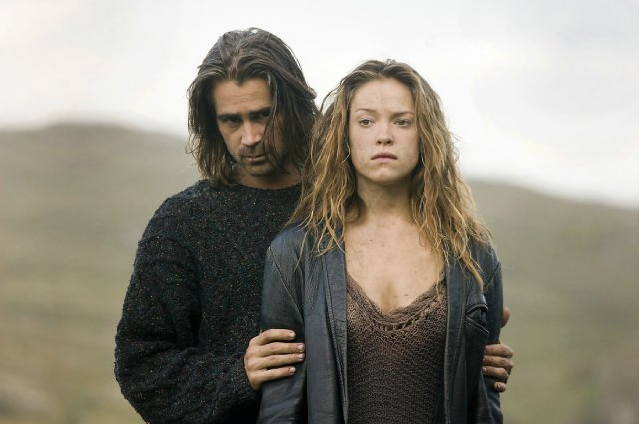 In Neil Jordan’s new fairytale, Ondine, Polish actress Alicja Bachleda plays a mermaid hauled ashore by real-life boyfriend Colin Farrell. We asked her about filming the movie, which played at the Tribeca Film Festival last week, accents, translation, and whether she plans to return to her singing career.

GILLIAN  MOHNEY: The opening scene, where you’re in that net with all the fish, is beautiful but also kind of scary.

ALICJA BACHLEDA: I didn’t understand what comes my way until I got into that net. The cold was nothing compared to the smell and sensation of laying on it.

MOHNEY: Was it actual fish?

BACHLEDA: Yes, most of it–they were still alive.

MOHNEY: Did you eat it later?

BACHLEDA: Yeah–exactly! There was fish served for two days afterwards.

MOHNEY: You had such a physically demanding role. How did you prepare? Are you a good swimmer?

BACHLEDA: No, I can’t swim. I can float–no no, I do swim. But nothing could prepare me for that, to be honest. I mean, cold is cold and this was quite extreme. I actually treasure that experience, because it was challenging enough for me to discover new strength in me. Especially the discipline and the ability to concentrate and focus so much on one thing that I can overcome some obstacles and boundaries. I remember, when I came to the set, it was a few days before we started to shoot. Neil Jordan asked me, just kind of reassured himself, “Well, Alicja, you told me you swim in cold water?” I said “Yeah, sure, I swim in Polish sea. It’s twenty degrees–it’s great. Now he said “Oh, no, no, no! Ugh, that’s eight degrees! And well, you know, you have to! You told me you can swim in that water and I don’t–I wouldn’t!”

MOHNEY: You’ve done films in German and French, and here you do your lines in English. Are you ever translating to yourself?

BACHLEDA: I do. It’s not even when I speak it but, sometimes, when I have to learn the lines, it’s that much more difficult because it doesn’t just sink in automatically, organically. I have to memorize it. It’s a tricky thing, as well, as when you improvise, sometimes you want to say something but you don’t know how to put it. It’s more difficult than in your mother tongue. It’s a challenge but, at the age of fifteen, I put myself up for it and I was aware that it would be an obstacle and many times.

MOHNEY: Colin’s accent was Irish, but different from his real one. Was that strange for you?

BACHLEDA: Well, it was quite interesting, because he puts on a very heavy accent–a heavy Cork accent–and he is great. It’s very well done, because it’s very natural-sounding, I heard, but it does make it quite difficult for everybody around to understand what he was saying.

MOHNEY: Yeah, it took about five minutes to get into it.

BACHLEDA: But I think it’s a great quality to the movie that it’s so authentic, and it didn’t go for a compromise, like speaking with clearing this accent.

MOHNEY: Do you think you’d go back to singing, if you wanted to take some time off?

BACHLEDA: Yes, I feel I have to, which is scary because I don’t really have a time for it, or a place for it in my schedule. It just comes quite automatically–after some time of not singing, I feel I have to go there and do some damage, record-wise.